Sonic has been on somewhat of a redemption arc recently. From a new Hollywood live action movie in the works to his very own classic Genesis console with nearly a half dozen of the blue blur’s adventures already preloaded, there’s a lot of this speedy hedgehog to go around. It’s been half a decade since Sumo Digital last got behind the wheel of a kart and raced Sonic along with his friends and some notable Sega mascots. Now, Team Sonic Racing takes those cameo appearances away and fills the roster solely with Sonic characters to race against one another in a team-based fashion, but does losing those Sega All-Stars mean the magic is lost as well?

Sumo Digital has the look and feel of a kart racer down to a perfect science. Hitting that top speed and drifting around corners feels incredibly tight and the sensation of drifting hits that nice balance between sliding with ease and having some weight in your kart’s rear. When you strike the edge of a wall or fall off track and lose your momentum, Team Sonic Racing’s faults come into view. Many of the tracks to race on feel derivative by nature, hitting a lot of the same themes as Nintendo’s mascot-themed racer. To pad out the tracklist, Team Sonic Racing features mirror tracks that I wouldn’t have otherwise known to be any different from their normal variations (and do we really need *three* casino themed tracks in one game?). Nearly half of the tracks were featured in the previous two Sonic & Sega All-Stars Racing titles, so I was a bit disappointed to learn that the tracks returned but none of the other elements that made those two entries unique.

In addition to the standard fare of races and cups (which are just a small collection of the same race types) are skill-based challenges to collect rings, evade traffic robots, or drift around checkpoints to earn points and extend the timer. Even with slightly upgraded karts and trying out different characters, I barely managed to hit higher than a silver or gold medal on many of these challenges. Compared to the speedy races, these extra challenges were simply not fun and a  frustrating roadblock when I just wanted to get to the next chapter and unlock another racing team.

Team Sonic Racing’s not-so-secret sauce to keep it separated from the All-Stars line of Racing titles is in the usage of that first important word in the title: team. Whether racing solo or online, Team Sonic Racing is built around a squad of three Hedgehog racers. Every race event in the Team Adventure mode is centered around racing alongside two fellow teammates to earn points. After each race, the individual racer standings are added up to a cumulative pool of points to determine ratings and just which team gets to stand on the off-screen podium. It’s possible that just because you place first, another team could overtake you in the final rankings just because their whole team raced consistently better.

Racing as a team means sticking together with the same crew between races, preventing the player from forging some unlikely alliances. Team Sonic will always be joined by Tails and Knuckles, just as Amy has a Chao family and Big the Cat at her side. This is a way to keep the teams balanced and always have one Power, Speed, and Technique racer in each race. The three skill disciplines are largely similar from team to team, with minor stat variations between each other.

Team Sonic Racing’s three discipline types mean more than just how quickly you take off from the starting line. Each type has unique abilities from one another: the Power type can drive through stage hazards without losing speed, Speed can recover faster after wiping out from an enemy projectile, and Technique can take advantage of different terrain types that would slow the other types down to a snail’s pace. Beyond these abilities, each type plays largely to how you’d assume various weight classes play off one another in other kart racers.

Teamwork is more than just racing alongside your teammates. Sometimes you need to give those lagging behind a bit of an edge so that they can overtake the competition. Whoever is currently leading the team leaves behind a golden trail to draft behind and follow. Those trailing behind can follow this slipstream to get back up to speed and slingshot the moment they leave the trail or continue following to build up a bar for their Team Ultimate maneuver. Of course, if you’re playing a character that doesn’t get impaired by driving through puddles or going offroad, I wouldn’t advise taking a shortcut that your teammates might not be able to catch up on.

The item boxes are another important tool in Team Sonic Racing, just as they are in any other kart racer. What’s held within those loot-filled boxes are familiar tools: temporary speed boosts, missiles of both homing and non-homing varieties, distracting hazards that obscure the other players’ vision, and the usual assortment of traps to drop on the track to take out someone drafting behind you. If you ever pick up an item that you might not be able to take advantage of, why not pass it to a teammate? Passing an item has a chance to convert it to another more powerful item in the form of either a triple-use variant or something rarer entirely. And, just as the drafting and slingshot maneuver fills your Team Ultimate gauge, so too does sharing an item between teammates.

A Team Ultimate is no different from team to team. All five various racing teams gain the same similar buffs for all three racers: increased speed and acceleration, immunity to hazards and items, and the ability to spin out enemy racers that you shunt and ram into. While uncommon, it is possible to gain the use of at least three Team Ultimates in a single race by constantly drafting and swapping items from one another. It’s a fun gimmick that gives Team Sonic Racing some differentiation from the other kart racers on the market, but that move alone isn’t enough to help it stand out.

There is a mild form of customization to each racer’s kart by way of randomized loot boxes. By cashing in the tokens you get from the single player adventure mode, you can take a spin on the local capsule toy machine and hope for something useful. Most of what you’ll get are one-time use items that help spawn in additional items, other times a bevvy of customization decals and horn sounds that offer no in-game benefits. Only rarely will you unlock new parts for your kart’s frame, wheels, and chassis. Each kart has around three different enhancements that offer stat upgrades and golden variants that do nothing more than gleam in the sun. Team Sonic Racing is awfully stingy with the rolls, usually offering one or two rolls after a race that frequently result in yet another triple-boost upgrade.

Team Sonic Racing is a very shiny and polished kart racer in screenshots and brief appearances, but that polish can only run so deep. What identity that Sonic & Sega All-Stars Racing brought to the genre has been removed and replaced with a roster of Sonic characters that only longtime fans can appreciate. Gone are Ryo Hazuki and his signature forklift, guest characters like Danica Patrick and the Team Fortress 2 Heavy, and any weapons that went along with these iconic guest characters. Instead, the cast is filled with fifteen Sonic heroes and villains with items boxes that lack creativity. If the racing didn’t hold up so well, I’d say this was one of the few kart racers in recent years that I couldn’t enjoy during local multiplayer parties.

On the PlayStation 4 Pro, console performance holds up decently well for a single-player experience. Team Sonic Racing targets 60 FPS, but more often than not, will dip down to 50 FPS during the more frantic segments and turns. It isn’t unplayable by any means, but rather a sore spot that mars an otherwise beautiful presentation. The racers themselves are colorful and shiny and each level theme stands out from one another in a wide array of color palettes.

Simply put, Team Sonic Racing is a fine kart racer, provided I stress the word fine quite heavily. There’s nothing inherently bad about this team-focused title, but so much of the identity that Sonic and crew developed from the All-Stars Racing franchise is lost. In its place are a cast of racers that only longtime Sonic fans could appreciate and a number of tracks and powerups that feel not only limited but derivative from other racing titles. But nevertheless, Team Sonic Racing is a fun kart racer that’s just limited in scope but should appeal to both fans of the genre and Iblis Trigger alike. 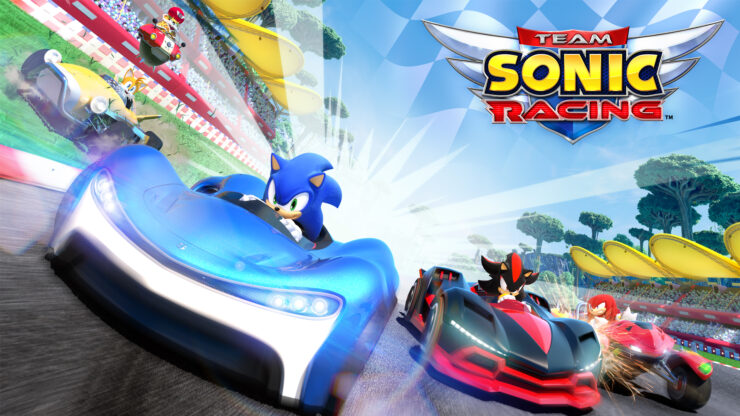 Team Sonic Racing is a shadow of the All-Stars Racing Franchise, losing more than just a fun cast of racers in the transition. There's still some fun to be had in this derivative kart racer, but you're better off seeking two other racers to join you on the track.