I'm one of those fans of Japanese games and culture that doesn't much leave the house (yes, a "weeb"). As a result, I've always seen videos of people playing Taiko no Tatsujin in Japanese arcades and felt pangs of jealousy. I do enjoy rhythm games, from Guitar Hero to Persona 4: Dancing All Night, so it always seemed goofy enough to be right up my alley, absolutely made for me. The big drums, the exaggerated swings, the chaotic songs; it's something I've just always wanted to experience. And now on Nintendo Switch, I can experience it anywhere. Pretty much.

Taiko no Tatsujin is a drumming rhythm game where you drum along to a variety of songs. There's anime soundtracks, Namco original songs, Japanese pop, classical music and a bunch of others. Drum 'N' Fun on the Nintendo Switch even includes some Nintendo tracks, such as a Kirby Medley, a Splatoon 2 Medley, and Super Mario Odyssey's Jump Up Superstar. The songs you recognise - which for me were the anime and videogame themes mostly - will be where you start of course, but as you go through the library of songs you'll find loads of catchy tunes you'll keep returning to.

For me, and I think most people, the song selection of a rhythm game is what will make or break the deal, and here, it's going to be divisive for some. If you're expecting J-pop and video game beats then you'll feel right at home with Taiko no Tatsujin, but anymore more adjusted to the soundtracks of Guitar Hero and Just Dance will likely feel alienated. These aren't contemporary Western chart songs. 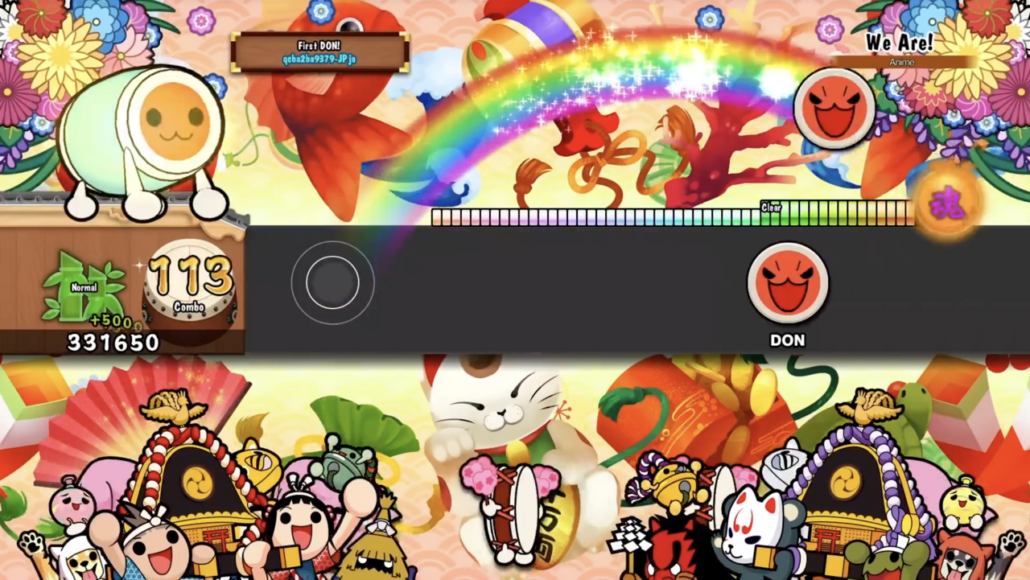 But that doesn't make playing through them any less enjoyable. Your inputs include a red "Don" and a blue "Ka", which represent hitting the drum in the centre, and hitting the drum on the side. These are coupled with drum rolls and balloons you pop by - you guessed it - drumming, and you have everything you need for some fairly frantic inputs. And when it comes to inputs, well, you have plenty of options.

You hold the controllers sideways, with the SL and SR buttons facing out, and slam them down like drumsticks. Straight down for a Don, and diagonally for a Ka. Unfortunately, it's not the most accurate, and the game pretty much just registers your motions as the correct input if you just flail on beat, frankly. It's better than constant fails, at least. In Easy and Normal mode, this is a fun way to play, but when it comes to the more complex beats of Hard and Extreme, it just isn't accurate enough. Perhaps the Taiko Drum makes this easier, but for me, motion controls aren't viable for fast inputs. 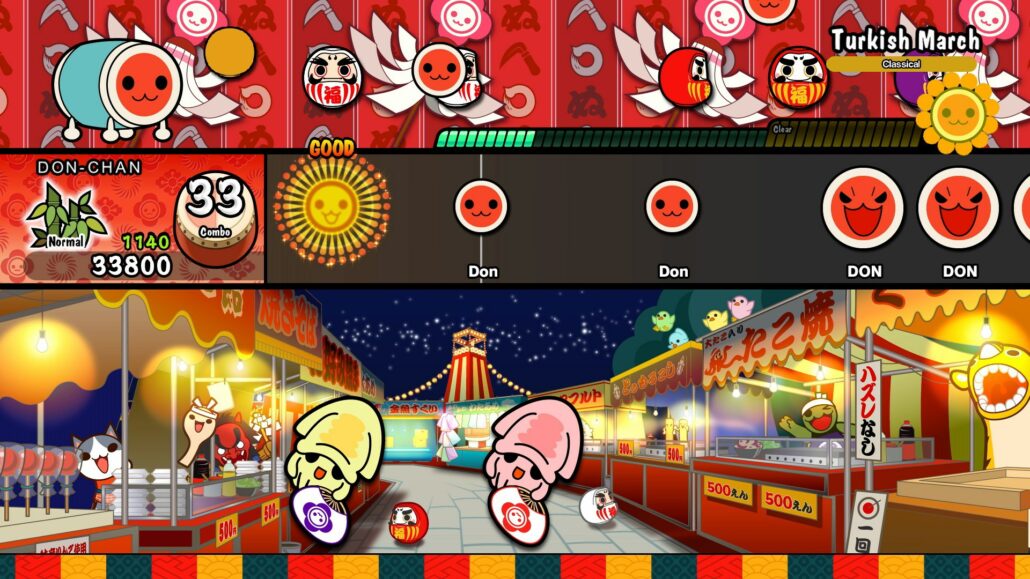 The Pro controller works well, but using the D-pad for swift inputs didn't feel right to me. The JoyCon, however, were perfect with their clicky buttons and became my preferred way to play when either docked or in handheld mode - though the touchscreen controls are of course accurate, and fun enough.

Even though there aren't a lot of inputs to memorise, the Hard and Extreme difficulties can be incredibly challenging on more difficult, faster songs, with players required to master on-beat and off-beat timings. It's surprising how much of a struggle it can be if you haven't practised the songs enough.

And practising those songs in Taiko no Tatsujin is a fun challenge that is hard not to enjoy, and even if you're struggling the game offers characters with Session Skills which can make things either easier or harder. Kirby offers easier beat timings, while other characters will only allow for perfect beats, or will not let your clear gauge drop. It gives an extra difficulty modifier outside of the difficulty selections.

And then there are the game modes. There are so many game modes. Even the base Taiko mode includes a selection of co-op or versus modes to play with a friend, so you can either challenge them or just clear songs together. There's a variety of different victory conditions and even items you can use to really mix up the gameplay and turn it into a more competitive affair, if you're interested in that. 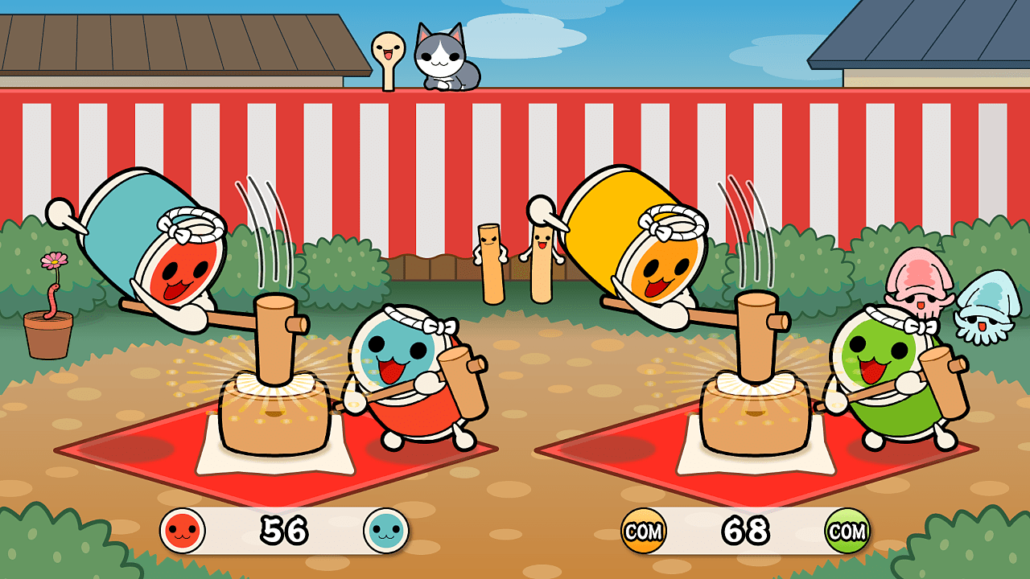 And then there are the minigames found in Party mode. There are so many I didn't have the time to count them all. Unfortunately, they all play out pretty similarly. You press a button in time to sound effects to win. Yeah, I get that's a very dry way of describing the whole game, but the Party games, even when with a group of friends, just don't feel that fun or exciting. Especially if you haven't got a full group of four friends and have to play with a CPU. Yikes. Though, that's certainly not to say that there's no fun to be had in Party mode. You can easily spend hours here with friends, but it never feels as substantial as the Taiko mode.

Sure, I have a few complaints to make about the controls and minigames, but those don't detract from the fact that Taiko no Tatsujin is an incredibly fun game that keeps me coming back for a few more songs. They're over quickly and completing them feels rewarding, both as your skills improve and you unlock more songs and characters. It might not be the best rhythm game ever, but it might be the best rhythm game on Nintendo Switch.

Taiko no Tatsujin: Drum 'N' Fun is aimed at a specific audience, those that feel comfortable smashing away to J-pop and flailing their arms. And it caters to that audience perfectly. With more than 70 songs and dozens of minigames, it's going to keep players tapping and drumming along for hours, and likely humming the songs for hours after playing too.