When you think of sports of the future, what comes to mind? Lucid Games has a vision of the future that involves MOBAs and tanks and I think I’m ok with that.

Switchblade is a free to play 5-on-5 vehicle-combat MOBA that mixes the strategy of DOTA 2 with the absolute carnage of a Twisted Metal game.

The rules are simple enough, your team basically needs to escort a squad of drones from your base into enemy territory as they ram themselves into enemy towers that will drop their shields leaving them vulnerable for attack from your team. Make it past the towers, and repeat for their opponents’ base core. Cue fireworks. Of course, this is way easier said than done.

The game flow becomes an interesting balance of babysitting your mobs while attacking the opposing team's mobs and players for XP. If the other players trying to blast the hell out of you wasn’t enough, there are also turrets that will make short work of your drones unless you take them out before they repair themselves so timing when you blow them is crucial. 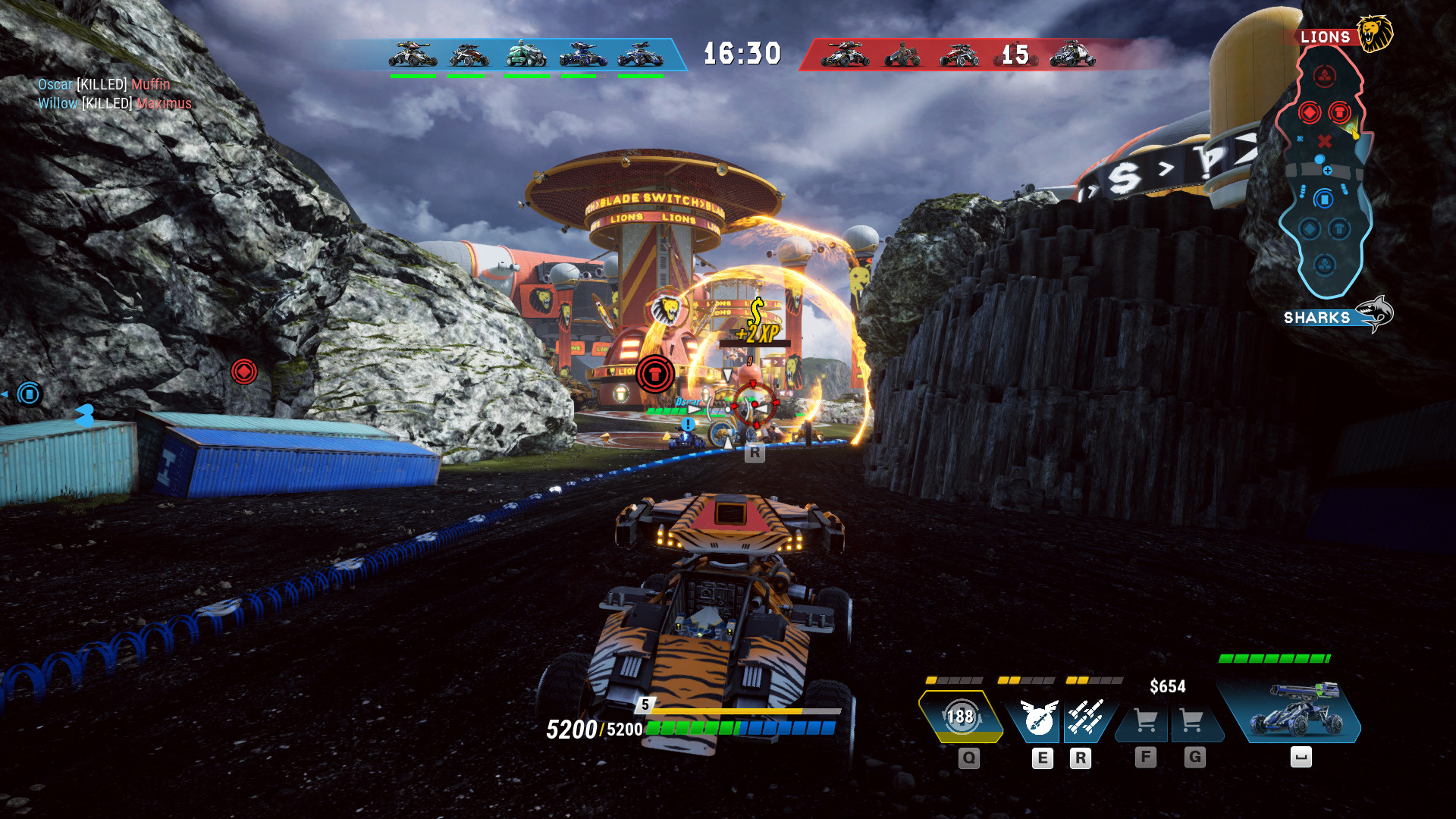 The 17 vehicles (divided into 5 different types) that you can choose are smartly designed to play more like fast tanks than cars. Again, if you’re into MOBAs, the classes will make sense to you especially if you lean more towards support roles instead of the standard Armored or Fighter types.

Personally, I’ve preferred the long-range Artillery types which specialize in bombarding enemies with dozens of missiles from a distance like Sidewinder. One really smart touch is that you’re allowed to choose two vehicles to swap back and forth from before the match which opens up more team composition options. Doing that lets your team adjust their strategy on the fly depending on what’s happening during the match. Healing Hippo is an enormous APC that heals anyone around it; it isn’t really the most fun to play but it is crucial to have in a match so it was good to be able to swap in when the need arises.

The ability to rotate your turret 360 degrees lets you stay in the fight longer instead of just having cars do drive-bys which would seem way less fun. Most of the Switchblades have a pretty tight turning radius and since they are tanks you can simply turn your turret 180 degrees and just go. The handling takes some getting used to, sure, but in a couple of sessions it starts to click once you stop thinking of the Switchblade as cars. 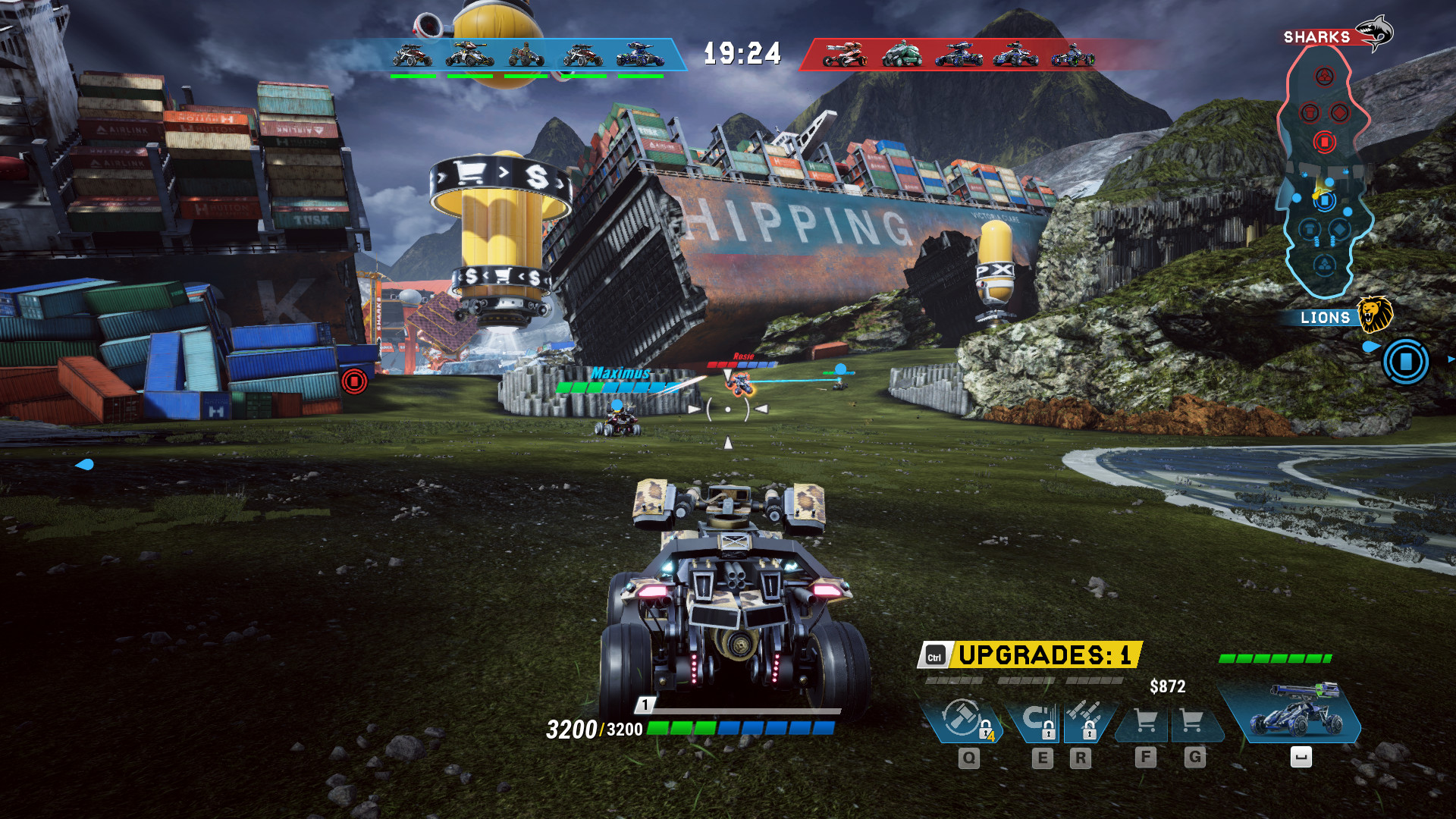 Each machine has two abilities and one devastating ultimate move. As you gain kills, you’ll accumulate cash and XP that can be used for upgrades and score some items that’ll adjust your stats. Buying healing items for your Switchblade gives you some options when there’s no healer around. Like any team-based game, communicating when you’re going to use your skills, especially ultimates, is what's going to give you a competitive edge. I’ve lost plenty of matches just because I was late with my epic missile salvo or covered the wrong unit with a forward shield and got my healer killed.

Being an Early Access game, you’re only limited to one map, Iceland, which is a standard three-lane affair with a couple of fun ramps thrown in for good measure. Lucid Games recently announced Monorail, another map as Switchblade transitions from Early Access to the Beta phase.

Early Access also means you’re going to run into a number of issues. Matches have taken an unusually long time to get going and there’s also a problem with matches not filling with players and then the remaining slots are filled with bots which tend to make things a little one-sided and suck the fun out of matches which happened quite a lot in the matches I’ve played. Another rather annoying bug was that parties would sometimes get separated post-game. 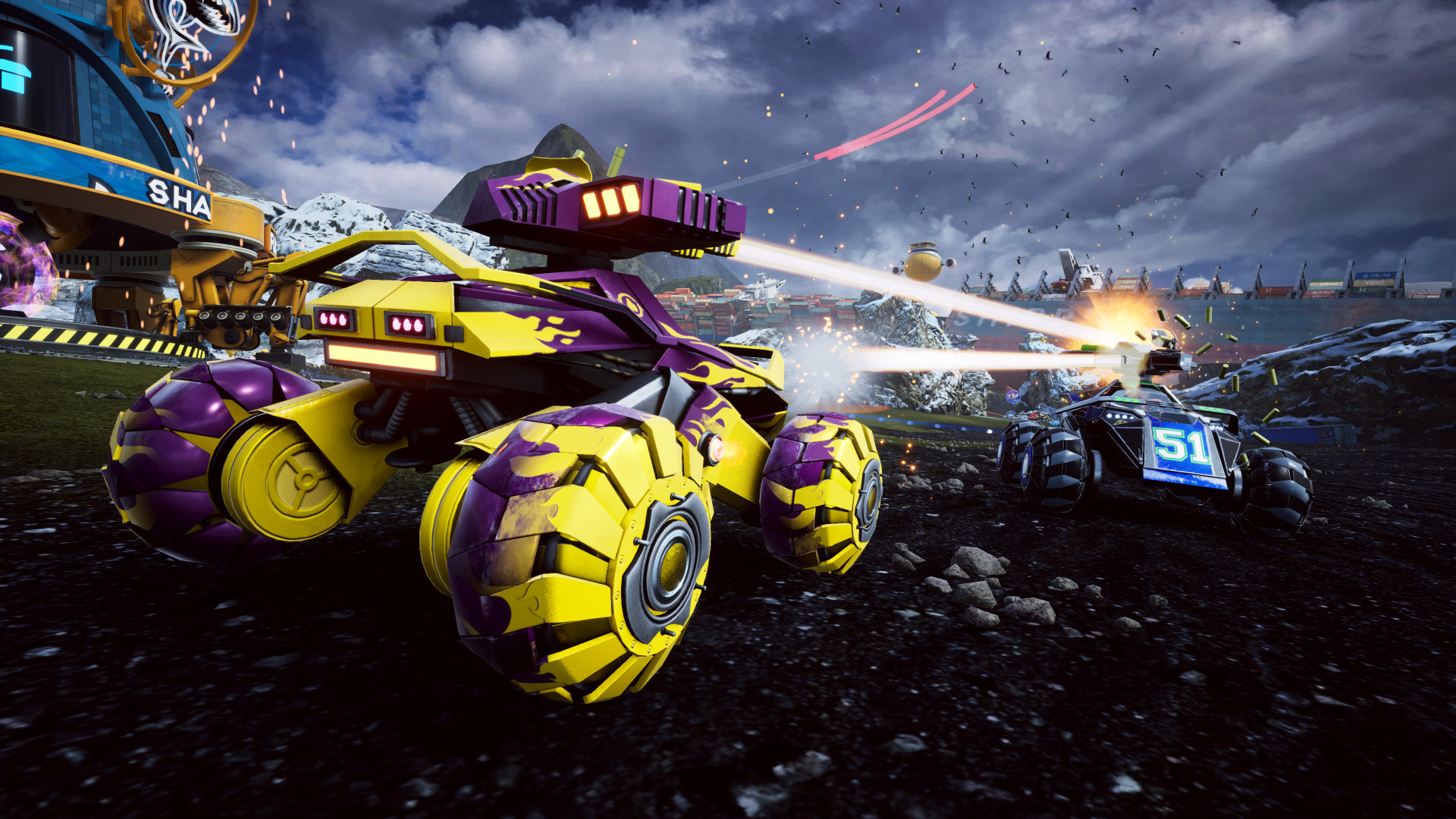 Since the game is free to play, you’ll only have access to a handful of vehicles from the start. You can buy a Starter, Epic, or Legendary Pack to unlock the rest if you don’t feel like grinding away. The developer provided us with a Legendary Pack that unlocked everything and some in-game credits for skins and customizing the pilot. I couldn’t get a sense of how much time you needed to grind credits in order to get vehicles since I had them all from the start. I’m hoping they use the Heroes of the Storm model and give you access to different Switchblades every week unless you buy permanently.

All in all, Switchblade is a decent enough MOBA that uses the car combat angle well to mix things up. It’s simply too early to tell whether this is going to the next big competitive game but it’s a good start. Hopefully, a couple of more maps, modes, and Switchblades will go a long way assuming the matchmaking issues get resolved. We will check back and finalize our review when Switchblade releases later this year.