The big heads and monster home runs pretty much tell you everything you really need to know about Super Mega Baseball 2. Metalhead’s Software is back with their charming arcade baseball game, this time with more polish and even bigger heads. Under the veneer of a silly over-the-top arcade game, though, lies hidden a deep and enjoyable baseball game that’s easy to play and customizable in ways you can’t get away with in a normal simulation sports game.

The lack of a Major League Baseball license is always a letdown but the fact that you can completely customize all the teams and players is a good trade-off. Do you want to make an entire roster of the boys and girls of your championship little league? Go for it. The look of Super Mega Baseball 2 is a silly stylized look with characters with massive heads and amusement park-themed looking baseball fields. The lack of commentary can make games seems eerily quiet as the sound just relies on ambient crowd noises.

In the Batter’s Box is where Super Mega Baseball 2 shines. The pitcher/batter controls find a good balance as easy to pick up controls lets players get right into epic showdowns without spending too long staring at controls in the menu screen. 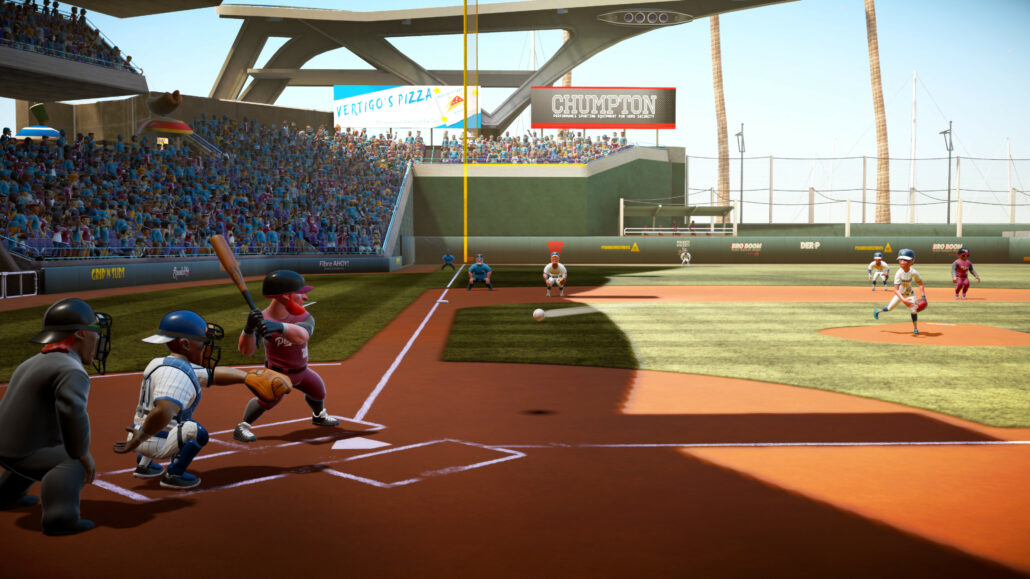 Hitting feels really good and the way the ball comes off feels unusually realistic. Chase after a bad pitch or get jammed up and you’ll see the ball dribble off the bat or hit lazy pop flies to the second baseman. The opposite side of the spectrum though like hitting the sweet spot of the bat and the ball will scream outta the park with some VERY satisfying line drives or dingers. I do wish baserunning felt as good as the hitting.

For the most part, baserunners will take off automatically and almost always take off on contact. Expect to get doubled up or having someone thrown out when they for some reasons decide to take an extra base. If you’re on top of your baserunners, they will drive you crazy.

On the defense side, fielding can be hit or miss, especially when trying to situate under fly balls. Most modern baseball games will have a small indicator telling your more or less where the ball is going to land. The lack of said indicator tends to make you do a double take on the most routine of flyballs. Fielders will automatically start to chase down balls but will often need a help since they don’t take the most efficient routes to the ball. Balls will also sneak their way through the infield on what feel like very playable ground balls. Given the style and general attitude of the game, it feels like its design for high scoring affairs with leads going back and forth. Too often balls hit in the gap between outfielders will find a way to the warning track when it feels like it should have been a single had the outfielder put a little pep in their step. If you want simulation baseball with deep seasons and franchise modes, you can always opt for MLB 18 The Show. 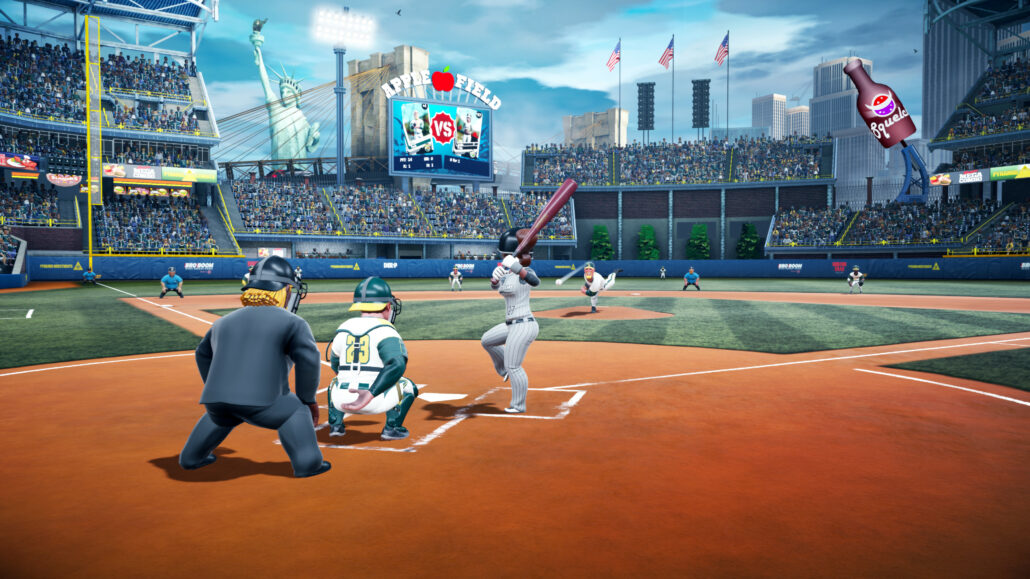 The Ego system is the game’s way of being able to adjust difficulty on the fly. These lets you tweak on the difficulty for pitching and batting. This is also set per user. So you could give less experienced players a handicap making it easier for them while you can still keep your difficulty at a more competitive level. This is ideal if your playing with casual players who drop in on the couch. Speaking of drop-in, there’s a neat drop-in, drop-out co-op feature that lets you and a friend take turns batting and working together on the field.

If you’re looking for fun arcade baseball action with a bombastic presentation, Super Mega Baseball 2 is a no-brainer. The easily adjustable difficulty makes these a great game to play with kids. While it won’t have any of the big names in baseball, you can still find a lot of fun in the deep customization and easy-to-pick-up controls.

Reviewed on Xbox One. If you don't have an Xbox Live Gold subscription, the game is priced at $29.99 on Microsoft Store.

Super Mega Baseball 2 improves and polishes an already fun arcade game that any baseball fan should consider at the price of $29.99 (it's even free on Xbox One if you have a Gold subscription).