It feels like once every WiiU game has been ported to the Switch, the WiiU itself will cease to be. Each WiiU will shake off the dust it has gathered for years under the tv and ascend into the sky, lost in a flash of glorious light. And maybe at that point, we can acknowledge that while the console itself had some issues, the games developed for it maintained and cultivated Nintendo’s legacy.

Because there is something timeless about Nintendo games. Super Mario 3D World came out seven years ago, but still somehow feels contemporary. Cynically, you could say that is because the standard formula for Mario games hasn’t really been altered since its inception, or because the Switch doesn’t offer the same ‘next-gen’ graphics as its counterparts which makes dating a game at a glance a little more tricky. But it isn’t that simple. Mario games haven’t evolved much because the formula hasn’t needed much refreshing since it was codified. But they have changed. The graphics aren’t photorealistic with ray tracing because they don’t want to be. But they have improved.

Super Mario 3D World is a simple, delightful, 3D platformer that has you and up to three friends bouncing their way through a series of imaginative dioramas separated by a world map filled with minigames and secrets. Bowsers Fury is an experimental offshoot of that formula, With a tightly packed, miniature open world and a looming threat reminiscent of Shadow of the Colossus or Horizon: Zero Dawn. While the scale is still miniature, there is a lot of scope in this offbeat expansion, but we’ll come back to that.

Super Mario 3D World is simple, expansive, replayable, and robust. If you’ve played a Mario game before, you’ll be immediately familiar with nearly everything this title has to offer. Racing against a very generous clock, you explore tight levels with a variety of power-ups. This includes the Cat Costume which made its first appearance in the original release seven years ago. It also completely changes the way you think about the game, assuming this isn’t the only Mario game you’ve played before. On top of allowing you to climb vertical walls, a vital power up for finding the collectibles, it also allows you to attack like most other traditional platformers. There’s a sense of familiarity about it as you run around and cut down enemies with abandon like Spyro or Crash Bandicoot. But the second something goes wrong and the option is removed, it can take a moment to reconfigure to the standard Mario game where you are forced to jump on enemies or flee from them.

Other powers-ups are equally game-changing, but none offer this sensation of playing something else like the cat costume. The way the power-ups so fundamentally change the way you play the game, however, is a fantastic touch that makes replaying levels fun and fresh as you hunt down stars and work your way through the game. Each different player character has a different power as well, from Luigi’s higher jump to Peaches floating fall. This can make discussions over the character selection screen a little difficult - especially if children are involved - but the abilities of each character are quite small and don’t majorly impact the game. Some levels require a certain character to find all the collectibles, but this can be a fantastic excuse to play through completed levels again.

The platforming, however, can feel frustrating at some points. Despite the name, a lot of the 3D levels are narrow paths suspended above the void that makes each misstep a journey back to the last checkpoint. And thanks to high angled camera angles and the Switch’s imprecise controls, these missteps can happen quite frequently. Not every level has this low-key annoyance, but as they’re discovered they can sour the normally sweet experience. If the area becomes a little too problematic, the game will also helpfully offer you an invincible suit to try and help you pass. But beyond that, that can probably be rectified with some lessons in patience, Super Mario 3D World is a fantastic platformer that is a pleasure to play for both adults and children.

Bowsers Fury is something of a shadow to the main game. It doesn’t harbor any darkness or attempt to take Mario’s journey anywhere you wouldn’t expect, but it doesn’t follow the typical path either. Players are dropped, literally, into a lake covered in tiny islets, structures, and bells while a giant, Kaiju-esque Bowser dominates the horizon, throwing down fire amidst a black storm. It's striking compared to the happy colours and cartoonish villainy of Super Mario 3D World, even if it isn’t actually severe.

The rest of Super Mario 3D World + Bowser's Fury plays much like the main installment. You explore the series of islands each one more or less self-contained, hunting for Cat Shines that can allow you to unlock the Giga Bells that serve as the hub areas of the game, and the means to defeat Fury Bowser. There are loads of Cat Shines to find, but the world isn’t so large as to become overwhelming or bloated, there is a reason this watery land is a lake, not an ocean. Instead, everything is tightly packed together, overflowing with nooks and crannies to explore.

Bowser's Fury also has a more over the shoulder camera that makes its 3D islands easier to navigate, especially when there aren’t any bottomless pits to fall down. The free form exploration, coupled with the flexible approach to the platforming and combat, not to mention the ominous silhouette restless at the centre of the world, makes Bowsers Fury feel very different.

Some of the Shines can only be collected with the accidental aid of Fury Bowser, which encourages the player to explore the lake in its two settings, the sunny and peaceful world, and the darkened, fiery, dangerous landscape that erupts as Fury Bowser does. Even if the latter only occurs for a couple of minutes and isn’t actually that dangerous, it's still an exciting moment to dash through the fire rain.

Once you’ve unlocked the Gigabell, the game becomes a 3D brawler as you become the giant Cat Mario Jaeger to Bowsers Kaiju. Some aspects of these clashing titans don’t quite work, with a slow camera pan and a fast enemy, and slightly confusing hitboxes. But despite that, and despite the fact that you’re playing a hundred-foot tall cartoon plumber dressed as a cat, there is something quite epic in the showdowns.

It is the most interesting, exotic, and alluring aspect of the Super Mario 3D World + Bowser's Fury bundle. The multiplayer aspect isn’t as strong though, with only one extra player allowed, and forced into more of a support role. But despite that it shows how much life is left in the Mario series, how much imagination, experimentation, and in this case, success can be found in the franchise nearly as old as the medium itself. 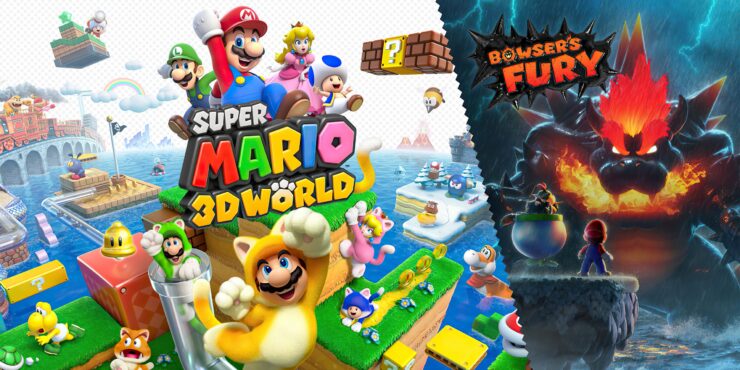