Numbers, and the use of them, should always follow simple rules. Indeed, nature and all of life itself follow mathematical patterns in one way or another. You would think, then, that video games that run on computers, basically giant number machines, would follow simple numerical rules. At least you would imagine the game would tell you what you need to know. Sudden Strike 4 is here to completely blow that logical assumption out of the water.

I'm starting by mentioning this because it's been one of my main bugbears throughout the 25+ hours I've spent with Sudden Strike 4. The bugbear is that the game simply doesn't tell you the value of anything. This isn't to mean any sort of monetary value of a tank or soldier. This is WW2, the value of men and the machines made by men were close to nil. Particularly true if they happened to be part of the Soviet army. I mean the value of completing a medal-gaining combat feat.

This is the first time in the series history that Kite Games have taken the reigns. Former developers Fireglow Games no longer exist and following the poor reception Sudden Strike 3 got, it's a reasonable surprise to see the franchise back. For the most part, the game simply brings back what made the first two of the series so great. What turns out to be the only new feature is the aforementioned medals which work with the new doctrines system.

In theory, you're rewarded for making sound tactical decisions. Flanking a tank, shooting and destroying it from the rear rewards you with the backstabber medal. Popping your men in and taking control of enemy vehicles results in a pillager medal. There are fifteen medals and each can be achieved as much as possible, rewarding you with points. These points are tallied up at the end of each mission, rewarding a maximum of three stars.

Here's where the problem comes. There's no way to actually tell how many points a particular medal earns you. Furthermore, there's also no way to tell exactly how many points you need. There's a bar at the top right-hand corner but it may as well not be there. It shows you the number of stars you've earned so far, but the line beneath it doesn't move in the slightest. There's no indication on whether a particular tactic is earning you enough to gain the next star.

It's a shame because the star and points system leads into the game's only real new feature: doctrines. At the start of each of the games 25 levels, you can select whether to use the infantry, tank or support general. Each of these have their own abilities, activated through the use of the stars you've gained throughout the campaign. What must be noted is that stars gained in one campaign are only usable in that particular campaign. While it offers some level of customisation, it's barebones at best. Indeed, a number of abilities like the option to pop open the hatch of your tanks and get a view distance increase is shared by all of the generals.

On the subject of view distance, the game gets this wrong in so many ways. I understand that infantry were used as the eyes of tanks, to an extent. Their primary use was for close-cover protection. The problem with the line of sight offered here is that since infantry doesn't actually use tanks as cover, once your infantry are dead then the minuscule range of tanks leaves them sitting ducks to the enemy with even one infantry acting as a spotter.

This lack of cover offered by tanks is a huge oversight in what is otherwise a greatly realistic game. All too often I've seen my soldiers sit behind a tank, getting shot at by riflemen with bullets that simply pass through the tank. It's perplexing because Kite Games have made it so bullets and small shells ricochet off of tanks. It looks absolutely fantastic when this happens. It also highlights the incredibly annoying system that punishes you for keeping your infantry close to the battle.

What makes it more of a shame is that they've managed to get everything else so right. The rubble of buildings, although carefully placed in such as Stalingrad, offers for an infantry playground. Sneak around to the rear of anti-tank emplacements through the rubble with infantry, clearing them to allow for your tanks to head through unharassed. These build up areas are notably slower as well as vehicles attempt to force their way through the rubble of buildings and, significantly, other destroyed vehicles.

Using the environment against your enemy turns out to be one of the best things the game gets right. Using the environment as cover is far from unusual in strategy games. What makes Sudden Strike different is just how much you can use it. Soldiers can hide in the wheat fields of Normandy, ready to ambush anybody unfortunate enough to cross them. In the built up city of Stalingrad, one shot against the middle or rear tank in a column could very easily lead to the loss of them all as their exit is blocked.

It's particularly good because every vehicle in the game can be crippled through multiple means. Roll over a mine or suffer an unlucky shot from the side, say bye to your tracks. Take a little too much small fire when the tank commander is out of the hatch and your eyes are suddenly lost. It's the finer details that really help Sudden Strike stand out amongst other recent strategy titles. Everything from fuel, ammunition and even the weight of a vehicle comes into play.

Particularly good are the abilities that can be unlocked for each unit. Anti-tank and anti-aircraft guns can be fortified with sandbags. Infantry can carry a number of grenades or mines. Tanks can also fortify themselves to an extent with sandbags. In addition, increased armour and speed, as well as other features can all be unlocked through the doctrine system. These add an extra layer of tactical decision making to an already intense game.

What must be said is that the AI is pretty damn poor. Back when I first saw Sudden Strike 4 at Gamescom last year the developers were high on the AI and its responsive nature. I'm fairly sad in the fact that this isn't visible at all. Enemies will send up flares to show they're being attacked but it doesn't seem to draw any real reinforcements. It's fortunate in a way because the game is already difficult. An AI that actually attempted to counter your moves would make for an incredibly difficult game.

I also have huge complaints over the use of repair and supply trucks, as well as medics. On a basic level they act autonomously, working on an allied unit in need that's close by. All too often they also simply stop doing their jobs unless explicitly directed. In a game that's already difficult, it simply makes these particular units frustrating as they wont do their jobs.

Working well with this are the aesthetics. Although it isn't the best looking game in the world but it has some great qualities. Particularly great are the smaller effects like the aforementioned ricocheting of bullets. It's impressive to see a battle in full flow as well, an explosion sending the corpses of men flying or uprooting a tree. Even better are maps like Leningrad where the weight of tanks and the explosions of weapons literally cracks the ice underneath your enemy, sending them to a watery death.

Surpassing the visuals, however, is great audio design. From the sound of a tank trundling along, or a damaged vehicles engine struggling. The blast of an explosion either at your location or somewhere else in the battlefield. Even the cries of a soldier as they suddenly start to get fired upon. The sounds of battle are fantastic, with a strong soundtrack to back it up. The only outlier comes with the voice acting, which is cringeworthy at best. Listening to it give a voiceover to historical footage or talk through the main objectives is something I could do without.

All things considered, Sudden Strike 4 is a sound real-time tactics game. Arguably the best in the series, it still isn't without its flaws. For all the great level realism and the depth of every unit, the game is let down by a shoddy AI. No matter how tactically challenging each of the 25 levels are, they're not replayable. This inevitably is the game’s biggest issue, feeling more like you're solving problems than facing a dynamic enemy on the battlefield.

PC version reviewed. Copy provided by publisher. You can buy the game for PC or PlayStation 4 via Amazon. 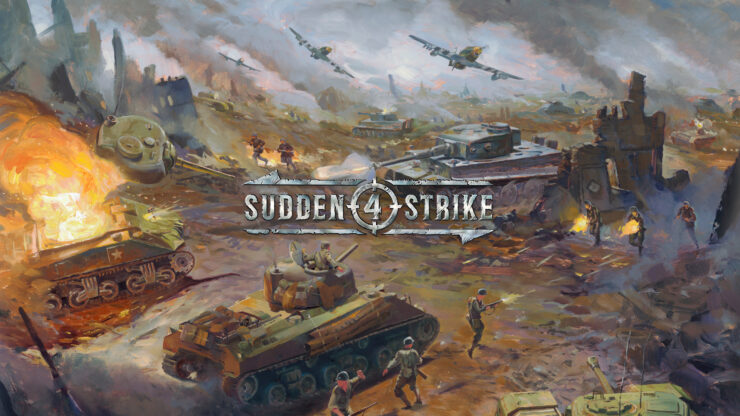 Sudden Strike 4 is a sound tactical game with a great depth of units and tactical options. It is, however, let down by limited AI which leaves missions feeling more like set problems to solve rather than dynamic battlefields, limiting any replay value.