There's nothing as frightening as crashlanding on an alien world, especially if this world is made up of a vast ocean filled with strange lifeforms. Crashlanding on an alien world can also be an exciting experience, as the joy of discovery gradually takes away any sort of fear one may feel. This is Subnautica, a masterfully crafted survival game where it's easy to forget that danger is lurking behind every corner. Developed by Unknown Worlds Entertainment, otherwise known for Natural Selection 2, it finally launched at the end of January after a couple years of Steam Early Access.

In the beginning, Subnautica is anything but welcoming. After the Life Pod lands on Planet 4546B, players are largely left on their own, with no resources, no map and just a simple knife to defend themselves. The game does its best to explain every mechanic as soon as it is encountered, but it doesn't really make the feeling of being lost any better - though that might just be the point. Once the surroundings have been explored, it becomes clear how Subnautica is an experience unlike any other. With a good food supply and better tools, it becomes possible to venture further into the underwater world of Planet 4546B, encountering a huge variety of biomes that look impressive without feeling completely unrealistic.

Even though exploration is the main focus of Subnautica, there are different ways to enjoy the game. For starters, the game features a proper story, which is told through text and voice logs that explain how the crash of the Aurora wasn't accidental and how Planet 4546B has become what it is when the game takes place. Truth to be told, the plot isn't that original, but it helps in making everything less arbitrary. Those who are looking for an even harder experience can play the game in Hardcore Mode, where there's only one life available. Conversely, gamers who are just interested in this unique experience can play in Freedom Mode, where the survival elements are toned down (but it's still possible to die). Those don't care about the story but want to explore the possibilities of the game's various mechanics can play the game in Creative Mode, where everything is unlocked from the very beginning. And there are quite a lot of possibilities there waiting to be experimented with.

In the journey to discover what really happened, players will have to venture quite deep into the abyss, exploring areas filled with Leviathan class creatures, extreme pressures, and very high temperatures. To survive in these conditions, players will have to create not only tools and weapons but also build bases, including a variety of facilities and vehicles, which all require materials. Base creation, while generally well done, can feel confusing, and a better explanation of the mechanic would have helped.

As already mentioned, Subnautica looks impressive most of the time thanks to a huge variety of biomes that are well crafted. Sadly, the game does suffer from some graphical issues, like pop-in and other visual glitches. It's not anything major, but it does damage the otherwise excellent immersion a bit. The soundtrack is very appropriate for the particular setting of the game, with a combination of soothing and tense pieces which accompany the sea exploration in a proper manner. Performance is also good, with the game running at steady 60 frames per second at max setting, 1080p resolution on a machine sporting an i7-3770 CPU, NVIDIA GTX 980Ti GPU and 16 GB RAM. The recommended specs are far lower, so the game should run properly even on older machines.

At the end of the day, it's somewhat difficult to put into words the variety of feelings a game like Subnautica can evoke. Fear of the unknown, excitement for the discovery, curiosity, thrill of battle are all mixed together to offer an experience that's unlike any other offered by survival games. Some things could have been better, but it's only minor stuff that doesn't damage the experience in a meaningful way. Whether you're a fan of survival games or just someone looking for something different, Subnautica is the game for you.

Review code provided by the publisher. You can purchase it for PC via Steam and for Xbox One (where it's still in Game Preview) via Microsoft Store. 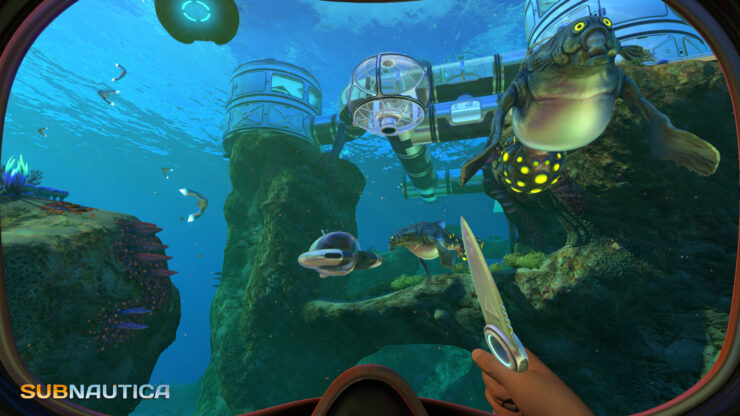