Steins;Gate 0 Review- This is Not a Happy Ending

There are few stories in gaming that have left upon me such a lasting impression as the original Steins;Gate, one that I waited nearly five years to be properly localized into English. The tale of a bunch of Japanese teens that stumble across the creation of a form of time travel (by way of sending text messages to the past) was one that left a lingering impression, unlike most titles in the visual novel genre. As the follow-up to 2010’s Science Adventure title, Steins;Gate 0 once again returns to the bustling streets of Akihabara with a small group of plucky youths, time travelers, and a number of new characters that are experimenting with creating a lifelike AI based upon the memories of one of the series’ most notable scientists. Spoilers will be light from here on in, although I would highly recommend at least watching the anime before proceeding.

Gone are the adolescent delusions of one ‘Hououin Kyoma’, instead replaced with a complacent and melancholic Rintaro Okabe dressed purely in black, as if mourning the loss of the character that he grew to love only a few months prior in the year 2010. What once began as a club of like-minded friends from the bustling area of Akihabara quickly turned into a summer of terror as the teens experimented with time travel and the repercussions of tampering with things they know little about.

In that brief amount of time, a project that Makise Kurisu was conducting (with the help of other university members back in America) was coming to fruition. Dubbed the Amadeus system, it’s a project that aims to create an AI that can closely mimic human emotion and thoughts. To do so, the thoughts of its creator, Kurisu in this case, had to be uploaded onto a computer to act as its base. As one that was intimately involved with Makise Kurisu in the past (albeit in a different ‘worldline,’ a concept central to the original Steins;Gate), Okabe is tasked with talking to this AI version of Kurisu and expanding upon their research. It’s through the interactions with Amadeus Kurisu that he is perhaps able to accept his loss and move on with his future, far beyond that of a so-called ‘mad scientist’.

Deciding to play Steins;Gate 0 without any prior knowledge of either the anime series or previous game is most certainly a recipe for disaster. In fact, watching the anime is almost a necessity to have any consideration of who the members of Future Lab are, the inventions that they’re produced (especially the Phonewave), and other events of note during that fateful 2010 summer. One particular episode of the anime, Episode 23β provides a crucial link between the events that transpired in the first Steins;Gate title and Okabe’s start as a ‘normal’ college student. 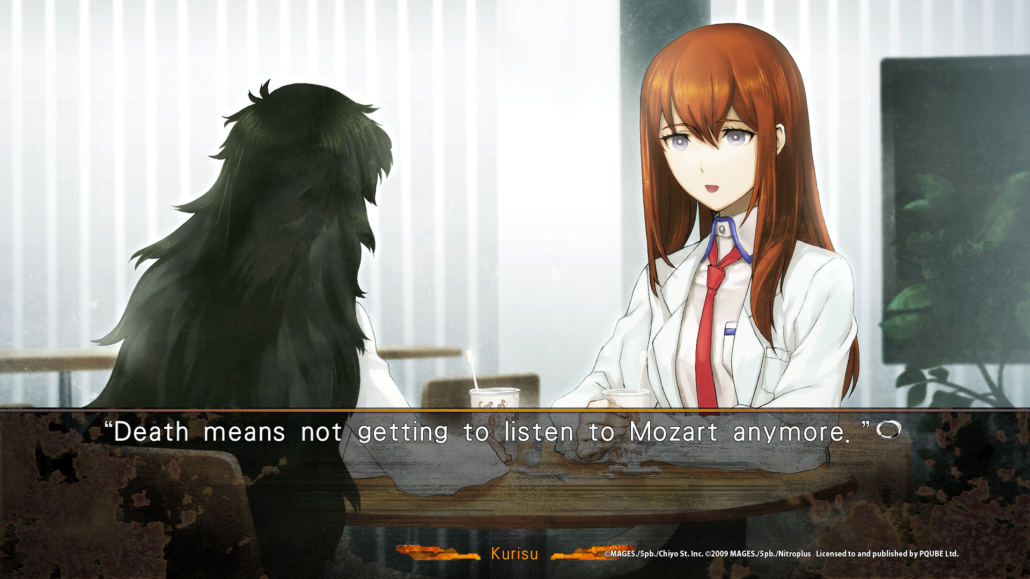 The events of Steins;Gate 0 aren’t purely limited to being viewed through the eyes of just Okabe. Each of the characters gets their own time as the narrative progress, giving much more insight into the minds of Okabe’s friends and just how some the aftermath of experimenting with time travel and the loss of a dear friend affects their lives. The change in direction helps give the player a different angle to some of the game’s key story beats

Before I had even considered putting my thoughts to paper, I secured three of the story routes and saw what creative ways the story in Steins;Gate 0 could turn. Only rarely would there be fleeting moments of happiness, only to be met with the harsh realities of tampering with scientific creations far beyond what any group of Akihabara teens should normally be capable of. While the usage of time travel as a narrative vehicle is kept to a minimum in this sequel, the story finds other ways to force the main character to reconsider the causality of his actions.

Steins;Gate 0’s novel-based gameplay mimics that of its contemporaries, player choices driving invisible ‘flags’ that steer the story in one direction or another. Much like the first Steins;Gate, the player interactions are driven solely by Rintaro’s use of a smartphone to answer (or reject) calls at crucial moments in the story. These pivotal moments are not immediately known to the player, but having played through the story multiple times and seen all that the Amadeus system can do, I counted less than five times that the player must actually provide any input to guide the story forward.

Conversations with the main character’s friends pop up from time to time by way of RINE chats (a service uniquely programmed by the Super Hacker, Daru) that provide a bit of flavor to the story and multiple choice responses from the main character that usually provide a bit of comic relief to divide the tension. However, these side conversations can be completely ignored if the player is rushing through towards the next story route and only has to decide upon picking up the phone at those pivotal times. It’s a design choice that sincerely streamlines the narrative compared to other visual novels, but I can only feel that it weakens any interaction from the player and instead guides the story along its own path. 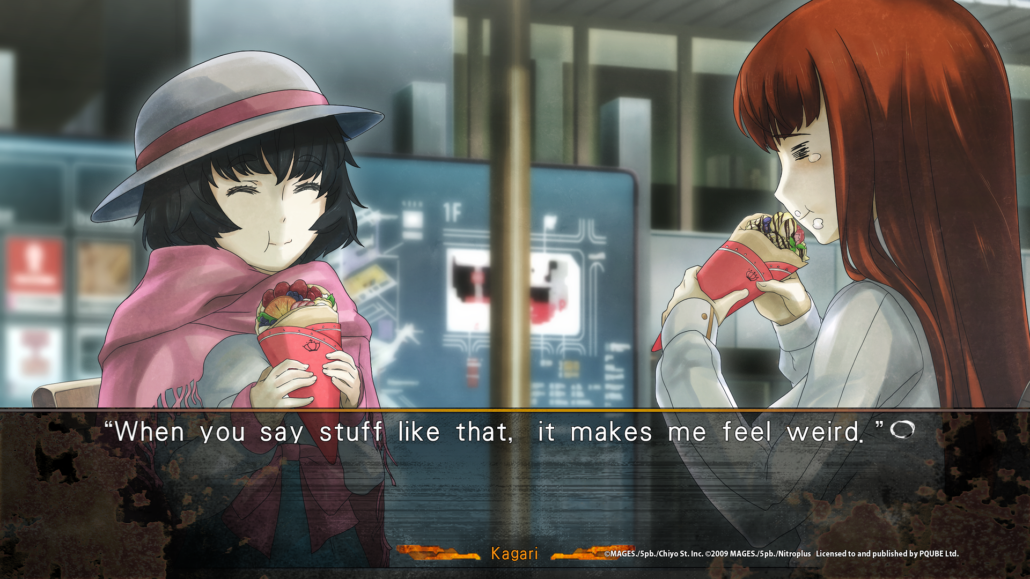 When all that the player has to work with to tell a story are pictures and words, both parts need to work equally well if the player is to be engaged with the story. Steins;Gate 0 matches both of these wonderfully with a sense of style that few other visual novels can match. While the voice work is only performed in its native Japanese, the few times that characters break off into English dialogue is quick notable. Integral to the story is a number of foreigners from the Victor Chondria University located in the United States where Makise Kurisu, the primary driving force of the original game’s narrative, was studying before traveling to Japan. The spoken English that these characters perform is certainly cringeworthy, but it only helps to make the story more believable with characters that are out of their native element. 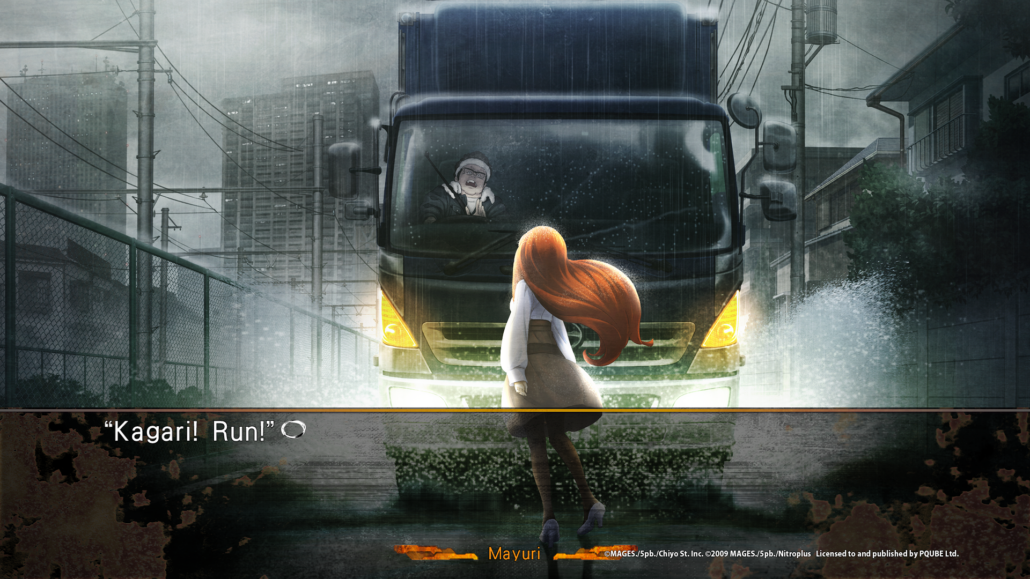 Steins;Gate 0 is a shining example of the types of heart-wrenching tales that can be told through the use of visual novels. There’s a sense of tension that kept me reading until the midnight hours, constantly hanging on to every word to see if Okabe and friends’ plight could get any worse. Despite all of this, the story picks up in crucial points and injects a bit of light-heartedness that’s much needed to keep the reader from losing all hope. While it’s more straightforward than its predecessor and heavily reliant upon previous knowledge of the series, Steins;Gate 0 is an amazing reason to get back together with some old friends from the Future Gadget Lab.

Reviewed on PlayStation 4 (code provided by the publisher). Also available on PS Vita.

While Steins;Gate 0 doesn't quite have the same emotional impact as its predecessor, this full-fledged sequel stands out as one of the finest visual novels and an amazing chance to reunite with the members of the Future Gadget Laboratory.