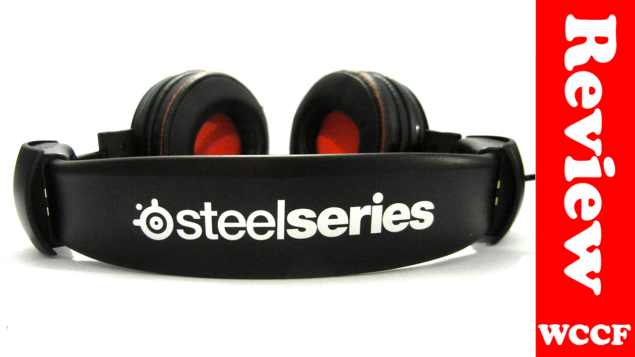 Steel Series is one of the more well known brands in gaming and are known for their rather diverse range of Gaming headsets. The Steel Series 5Hv3 is a medium tier product and lies in the lower - mid spectrum of Steel Series Audio Products. In this review we are going to keep in mind the price bracket of the headset and only compare with immediate products. It would be the height of unfairness to compare it to, say, a $500 Sennheiser Model.

The Steel Series 5Hv3 is a very standard stereo affair with two main drivers at both sides and a multidirectional mic attached. The good thing is that the mic is retractable, as is the case with most Steel Series Gaming Headsets, so it won't interfere with your non-chatting use. Both the cups are detachable for carrying comfort although without a carrying case you run the risk of scratching or breaking the head set.  And now the technical specifications:

The Steel Series 5Hv3 ships in a card box box with mildly colored red and black tones. The box does not feature any bells and whistles such as a plastic showcase or a plastic handle, instead preferring a a more spartan look. 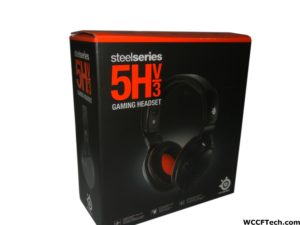 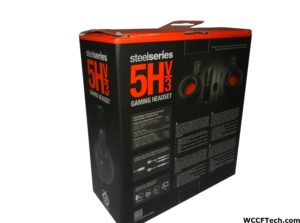 The right and left side of the box do not offer anything more than some glossed pictures of the 5Hv3. 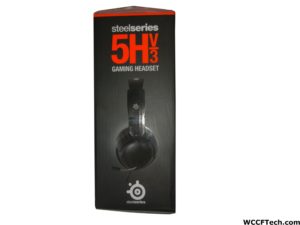 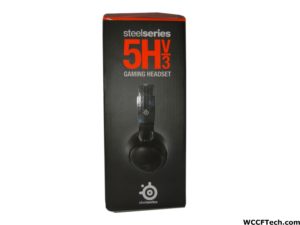 The top side of the box bears tatoos of famous e-Gaming clans such as Natus Vincere (Na'Vi) , FNATIC, TYLOO and Ninja Pyjamas. Out of which I am only familiar with Na'Vi because I play Dota 2 and they are quite the buzz there. The underside of the box reveals some boring but necessary manufacturing information including but not limited to Serial Numbers and Bar Codes. 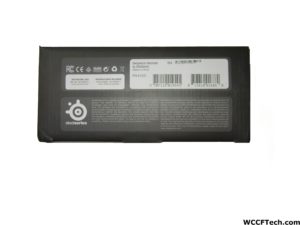 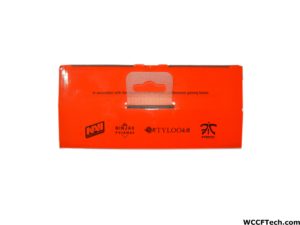 The insides of the box only contains a thin plastic mould which holds the 5Hv3 and also contains the rest of the packages in its underbelly. The plastic mold fashionably shows of the headset but the spartan feel of the insides might deter first timers, since compared to other brands, the contents feel woefully inadequate. 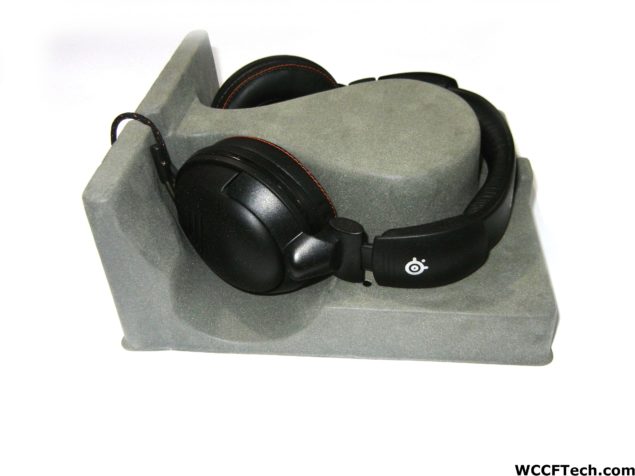 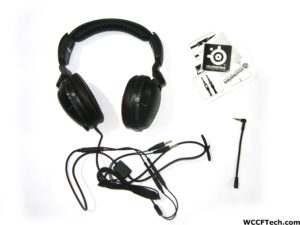 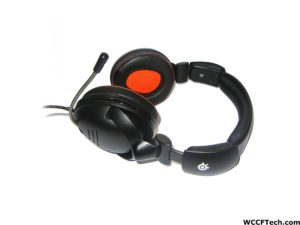 We in the box, some stickers, an extendible coded cable and a conversion jack.  The Conversion Jack is basically a mobile end 3-pole 3.5mm jack while the extended cord is your usual, high quality braid. Once again, no bells and whistles, the entire focus on the actual product which is the headset. We also took the liberty of taking it apart and taking some extra clicks of the dismantled headset. However it is worth noting here that even before we actually wore the Steel Series 5Hv3, the ear pads felt very soft. The softness of said ear pads is literally indescribable, but we will attempt to do so anyways. The feel of the headset is simply amazing and completely pain free, even after 6 hours of continuous game play. After that, you might start to experience some uncomfortable weight on your ears, but that is miles ahead of any other brand I know. The Steel Series 5Hv3 is a tournament grade headset and it is designed with extended use in mind. On that count, trust me when I say, its unbelievably comfortable to wear. 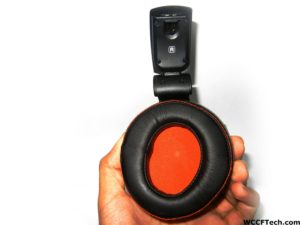 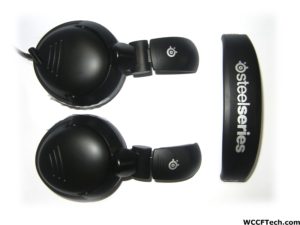 The usual disclaimer for audio products: Before I begin, let me say this. Sound is completely and utterly relative. Audio that appears heavenly to me might appear utterly horrible to you and vice versa. That said, being an enthusiastic audiophile my testing methodology is quite thorough . Without further ado, let me describe my testing methodology. The first part will be to test the audio fidelity of the headset in non-Gaming situations. This will include music and movies. The other part will include Gaming situations. 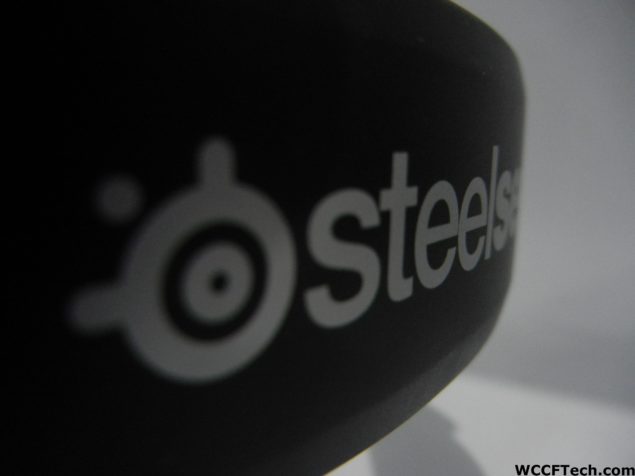 The Steel Series 5Hv3 has a custom engineered Sound Scape for Gaming, therefore the performance in movies and music took me by surprise. I usually use Blurays for sound testing and coupled with my dedicated Sound Card (Sound Blaster), it sounded very very good. However, upon switching to Onboard audio, the punch of the sound fell a little. Music however, was another story. I noticed that in both onboard audio and dedicated audio, the 5Hv3 performs remarkably well. Listening to Adele's Rolling in the Deep, I could hear the usually impossible to decipher ambient music with these head phones. Moving on to symphonies and I was no less surprised. However when you start edging towards Rock and Metal, the spell starts to fade. I think the reason for this is the engineered sound scape, which is more aligned toward bass-pitched, wholesome songs as opposed to treble pitched, high note songs.

Now the real part we have all been waiting for. For the first instance I decided to use the onboard Audio (ALC 989) and run multiple games, sampling each. The games I tested were: Grid 2, Dota 2, Metro 2033, Battlefield 4,  Crysis 3 and Final Fantasy XII (PS2 Emulator). Now here's the cool part, the 5Hv3 did not fail to deliver on Onboard Audio alone, but, it received a very significant upgrade when switching to dedicated Sound. Lets talk about positional audio. Gaming relies heavily on Positional Audio but you can only expect so much from non-Surround headphones, which I might add have multiple drivers as opposed to two. Even so, the SteelSeries 5Hv3 delivers on the same to a reasonable extent, but that much is expected from a Tournament Grade headphone. Everything gained some serious punch and the true power of the 5Hv3 started to become apparent. The fact remains that Onboard Sound just can't keep up with the raw power of Dedicated Audio, and 5Hv3 relies heavily on the quality of the output.

Overall, a very decent quality headphone but the price ($50 on Amazon, $79.99 listed) can be a serious deal breaker. Adding a few bucks ($20) more will net you the Sibera V2 which is far superior in terms of Audio performance overall  (quite heavily in non-gaming scenarios and slightly better in gaming scenarios), although the Siberia V2 is now quite aged. Ofcourse, the 5Hv3 is second to the 7Hv3, which is meant as the true Gaming headset for Tourneys. Bottom line is, if you want a very decent quality gaming headset, particularly in stereo, go for it. But if you are looking for value, then the same isn't the Steel Series 5Hv3's strong suite.