I've always considered myself a proper armchair general. Playing games like Total War, Company of Heroes, Command & Conquer and even every single one of Eugen Systems older titles from Act of War: Direct Action onwards. Back when I played Steel Division: Normandy 1944 I enjoyed the game, despite a few flaws that always hindered me if at least a little bit. Steel Division 2 has... well, for lack of a better word I may finally understand at least some of the difficulties a general may have faced.

Well, that's if a general at any point has to put up with the amount of text-based diarrhoea thrown at them at every given second. That may give a slight hint about one thought I have when it comes to Steel Division 2. Sadly, it isn't my only complaint. In fact, let's get the complaints out of the way before moving onto what I actually like about the game. So yes, one is that you are quite frankly swamped with text, on top of text, featured in menus with options that aren't really explained, all in a user interface that...

You know what, I've always been a fan of one of the most text and menu focused series around, also featuring a sizable and extensive UI, Football Manager. Still, dear god, I've found this to be overbearing. There are options to at least shrink the UI or to hide certain aspects, but it's just not enough. Not only that, it's clunky. When you're on the battlefield and want to bring some more units to the fight, god forbid if you're controlling more than one army. You're in the middle of a huge battle and you've got to start clicking out of one brigade to enter another brigade and then click on the units you want to bring to the battle. I'm fairly sure I'm a relation to Ecco, the number of times I've been clicking.

Now, this is to be expected when you enter battlefields with up to three divisions per faction (single player), four vs four in Skirmish or a huge ten vs ten in multiplayer. Granted, in the latter two you won't actually be controlling the entirety of your forces - fortunately, you don't need to in the campaign either. I have to say, the fact that you can actually fight a battle and delegate up to all of the three divisions to the AI is a saving grace, though this has its downfalls. I tended to control just one division, leaving the other two to the AI. I completely understand that a battle involving thousands upon thousands of people is going to be chaotic, but there's just something about this that made it about as absorbing as a concrete slab.

There's little doubt that this is partly due to the sheer size and scale, mixed with the lack of any form of an approachable tutorial. It is undeniably impressive, watching what must be hundreds of units moving and fighting on the map, a map that you can zoom in to close enough to watch a single sniper shooting his Mosin Nagant or see the muzzle flash from a T34 as it fires at an enemy tank. So while the sheer size may be overwhelming, which it certainly is, it's also one of the major selling points of Steel Division 2.

When you jump into the game you'll be given the option of four different modes within the game, most are self-explanatory. Skirmish is as Skirmish always is, take to the battlefield with varying forces. Multiplayer, take to the battle on a Skirmish map with up to ten forces per side - you can also have player vs AI as well, should you want to. The other two modes are historical battles, where you'll take control of the Axis or Allies forces in what are currently six battles based on historical events, with very select goals to achieve. Finally, there is the core draw of the game, the Army General mode.

Army General is the mode that I was shown when I saw Steel Division 2 at Gamescom last year and I have to admit, in my preview, I got a few things wrong. At the time I stated that you could take a maximum of five units into battle - units, in this case, being the regiment you control on the map - where the reality is that you can take a maximum of three. At least that's the maximum I ever seemed to be able to take during the Army General campaigns. There are a few campaigns too, each covering a different sector of Operation Bagration.

The campaigns are, at best, a mixed bag. Mostly positive, with sprinklings of negativity. Think of it as if Tinkerbell was having a really bad day and her fairy dust gave you a rash. So in the four campaigns, you're limited to a set number of turns. This is another part I got wrong, a turn represents half a day, not a full day. Operation Berezina, for example, takes place across eight days, so sixteen turns. You have until the end to capture a specific target, meeting historical accuracy. That or defending if you take on the role of the Axis and going against history. I honestly just wish you could turn off the time limit or there was a large campaign that was set outside the constraints of history.

Granted, being forced into these historical campaigns and limits makes for an exciting and interesting challenge. You genuinely have to think about what you have at your disposal, the movement speed and range of units, will they be able to attack soon enough? Action points aren't completely replenished every turn, only partially, and can you actually beat the opponent? I do have a slight issue with the auto-resolve as it never seems to do as well as it should. Partial auto-resolve offers a nice medium, giving you a slight bit of control.

Should I complain a little more about Steel Division 2, and I will, it's that the AI can be annoying. Frankly, it's a moron, charging units in and getting them killed, which is the previously mentioned downside of using the AI to support you. Also, the AI cheats. This AI cheats to the same level as Frank Abagnale did in job applications. In a battle, you have limits on resources, line of sight, ammunition and more. The AI seems to be able to spam more units than the Borg, I swear they also have Predator Drones because their artillery cannot be able to see you and also be as accurate as it is and dear god does it irritate me that they can fire forever. Ammunition, folks?

This can destroy the immersion and historical accuracy that Eugen Systems have worked so hard for in Steel Division 2. It's a shame because they really have focused on getting each and every unit you would have found on the battlefields of the eastern front in Operation Bagration and getting them right. Well, there are a few slight balancing issues here and there, but the attention to detail is admirable, to say the least. I have to repeat myself, but I truly do think it's incredibly impressive getting the sheer number and quality of units they do, all on and fighting within one single map, a map you can zoom as far out as you need to, or zoom so far in you can practically get in a tank.

What happens to be great visual quality for a game of the genre truly helps this too. For the best idea of the quality of the vehicles, you need only look at the in-game armoury. This shows the exact same model you'll see on the battlefield, letting you look around it as well as view most of the statistics any military buff could ever want to read. Also, if you do have some personal favourites, there are customisation options such as the ability to create your own battlegroup, using the divisions you have available. Granted, some of these are locked out via DLC.

Also, a quick afterthought, the audio is pretty damn great, with the sounds of battle ringing out whenever you're zoomed in enough to hear the hum of engines,  the rattle of machine-gun fire and the flames of destruction. This, combined with a decent and very fitting soundtrack really works well within the game.

Steel Division 2 is a game that I want to like so much more than I do. I really, really enjoyed the first and at times I found myself getting engaged and enthralled in this, to only then be fired back out like a Howitzer shell. Whether it's the utter lack of explanation for anything, with the exception of a few small tooltips or possibly the AI which is both a bit stupid and cheats like... a big cheater. I'm running out of ideas here.

You can purchase the game from Green Man Gaming with a 15% discount. 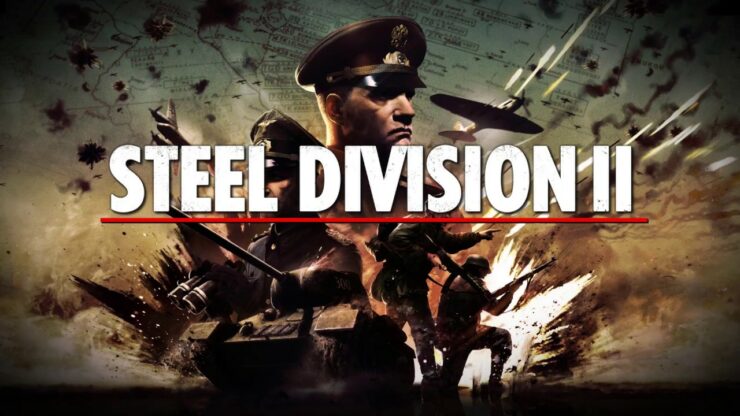 Steel Division 2 is a game with some excellent ideas, such as the Army General campaigns, the attention to detail and the sheer size of battles in multiplayer and, to a lesser extent, skirmish. Also, it looks great and, despite the sheer size, can be really engrossing to play. At least for the most part, with the game being let down by an incredibly high barrier for entry, offering no help because the tutorial is a sheer Berlin-wall of text and an AI that seemingly decides it's only fair for it to cheat, all of which can take you out of the game.