Valve is no stranger to experimenting with different hardware to operate its extensive library of computer titles. From the Steam Link to the Steam Machine, there have been a variety of hardware products to bring the PC experience to a different platform. However, neither Valve (nor have most PC hardware manufacturers) attempted to breach the portable market, at least not at the price point that Valve is pushing their first generation of Steam Deck devices. Imagine being able to have an entire back catalog of Bethesda or Square Enix titles at your fingertips at cheaper than an Xbox Series S and monitor, but with the bonus of being able to take it on the go. Valve sent over a 256GB Steam Deck unit for our review, putting a $529 piece of hardware in our hands and allowing us free reign to play around with it as we see fit.

At a glance, the Steam Deck is an impressive piece of hardware crammed into a portable device with a 7" touchscreen that caps out at 800p. There will always be the naysayer asking why Valve didn't go with a 1080p IPS screen. Honestly, the level of performance that the Steam Deck puts out across the array of titles I've tested makes me glad the resolution is set the way it is. I'd take a locked 60 frames per second on an 800p screen over a fluctuating 45-50 fps on 1080p any day of the week. To power that 800p display, the Steam Deck is powered by a Zen 2 'Aerith' CPU that can put out up to 3.5Ghz across four cores and a 'Van Gogh' GPU that operates up to 1.6Ghz across 8 CU.

To keep the heat down and increase battery life on the go, Valve has implemented system-wide limiters to limit the TDP from 3-15W at a push of a button as well as the option to set a manual fixed GPU clock or even artificially limit the frame rate to 30 FPS across the board. These options are all as simple as pressing the Quick Access button (located below the right trackpad) to bring up the Performance and quick menu overlay.

Not wanting gamers to settle on just one control scheme, Valve has implemented a wide array of control options that go above and beyond the standard Xbox-style controls. Trackpads on either side of the screen can function as mouse input, while four grip buttons on the backside of the Steam Deck can be freely remapped. Both analog sticks also feature capacitive touch, something I accidentally discovered when testing Dark Souls III and noticing that the gyro would kick on to aim the camera whenever I laid a finger on the right analog stick. Holding down the Steam button activates another range of optional controls, such as turning the right analog stick into a mouse cursor or pressing Steam + R1 in combination to quickly screenshot your display.

The Steam Deck simply feels natural in my hands, with the sloping sides on either side fitting into the contours of my hands. A somewhat sore spot for the controls is in the directional pad. The d-pad has some wiggle to it as it rolls around atop the silicone membrane; otherwise, it feels good for navigating menus and even hitting the corners when rolling quarter-circle motions in Street Fighter. All of the primary buttons you need are easily within reach with Steam Deck in hand, while the Steam and Quick Access keys are both far enough to prevent accidental input during gameplay.

Navigating the Steam Deck is intuitive and straightforward when all you want to play is already installed. The opening screen holds your Recent Games all lined up in a horizontal carousel with clear marks for the Verified status in the corner. Going down on this page also displays updates to the games and software installed as well as a quick glance at the newest items on the Steam store, including a few key sales. Pressing the Steam key brings up the main overlay where you'll have access to the rest of your Library, the Store, Friends & Chat, Media, Downloads, Settings, and Power. Trying to navigate through the Store with merely the gamepad controls is an exercise in patience to track down what you're looking for, but thankfully a search bar on top of the screen makes it simple to look for. If you're not sure what you're in the mood for, the Store page opens with a Great on Deck carousel to look for games that pass all of Valve's compatibility checks to play on the Steam Deck with no headache.

To the casual user who merely wants to take their Steam library on the go, the Steam Deck is nothing short of an incredible value. Other competitors have been in the portable gamepad PC space for years, but none have hit the aggressive pricing that Valve has hit with the Steam Deck. Look at the Aya Neo, a device that starts at $900 for comparable specs to the Steam Deck. Look at the GPD WIN Max 2021, coming in at nearly three times the price of the Steam Deck. Even look to the modest number of laptops with discrete graphics cards that barely come close to matching the technical specs of the Steam Deck. By releasing their hardware at a price on par with the next generation consoles and allowing players to access their libraries of hundreds, if not thousands, of Steam titles, it's nigh impossible to come across a better value in video gaming.

The Steam Deck falls behind in its ease of use for the average consumer, though. If all you're looking to do is have a way to play Sekiro: Shadows Die Twice on the go, a title that's among the select number of Steam Deck-Verified titles, it's a simple process. Find the game in your library, click Download, and simply jump into the game as Valve configures the game and gamepad profiles automatically. But what if you find that the controls aren't to your liking, or perhaps you want to enable/disable gyro support for moving the camera? That requires jumping into menus outside of the game to configure the gamepad and make it work. For fully Verified games, it's an easy process to change around as you see fit. Even the controller configuration menus are presented with simple, easy-to-follow guidelines. Want a configuration that a friend recommended over Valve's official offering? Simply drop down the list of available options. Don't like gyro aiming, or want to put those four rear buttons to use? All of those tweaks are easy to set up and save on a game-by-game basis.

For titles that aren't fully Verified on Steam Deck, usually, there's more work to get these games up to snuff. Much of my testing was going through a library of fighting games to ensure that these games would work and perhaps become my new way to host friendly matches on the go without lugging around an entire console and monitor. Just running through a quick list of things that worked: Street Fighter IV and V? Both excellent. Melty Blood Type Lumina? No issues. Guilty Gear Strive? Plugging in an arcade stick into my makeshift dock worked just fine, matches played great (over WiFi, of course, so I'm sure my opponent was cursing my connection status) yet trying to navigate and manipulate the lobby menus meant getting off my external controller and using the Deck controls to move around the lobby and set up my next match. Then again, Strive was not among the elite number of Verified titles available ahead of the Steam Deck's launch, and that very well could change between today or when the first Steam Deck units start making their way to customers.

It's difficult to quantify just how many games work and didn't work on the Steam Deck because that number changed daily during my two weeks with the portable console. TItles that wouldn't work one day would magically work without issues on the next experimental build of Proton. Persona 4 Golden was a title I checked daily; it wasn't until late last week that the game would get past the initial black screen loading sequence and get into the game. It's currently flagged as Non-Compatible, yet I've had no issues jumping in and playing at a comfortable framerate.

Even titles you wouldn't expect to run are suddenly compatible with the Steam Deck. One title that Valve recommended to look at was Rockstar North's Manhunt, a PC game that has notoriously not been compatible with operating systems newer than Windows 7. I thought I would take a look just to see how it worked on a Linux system instead. Needless to say, the game would run and hold a decent frame rate, but all of the controls were incorrectly mapped. Moreover, it was impossible to even finish the tutorial and achieve your first kill. As Manhunt didn't natively support controllers in its first release, this would be an instance where Valve's controller mapping setup to mimic keyboard commands would be ideal.

At the same time, Forza Horizon 5, currently flagged as Unknown in terms of compatibility, would install to take up a not-insignificant chunk of my 256GB storage, only to find out that the game loads just fine but without the ability to sign into a Microsoft account, thus locking myself out of being able to actually play the game or even use it for benchmark testing. In this instance, the separate login app simply would not open up on the Steam Deck.

One of the Steam Deck's sore spots is in its battery life. Valve's included a 40Whr battery inside the Steam Deck that advertises a 'two to eight' hour battery life. To test this, I had a look at Sekiro: Shadows Die Twice in the opening stage and held down the right analog stick to rotate the camera. At standard video settings and 100% brightness, I achieved 2:31 in battery use before completely draining the battery. Implementing a limit down to 30 FPS via the Steam Deck quick menu boosted the battery life to 4:02 with no other changes made. Similarly, I ran a YouTube live stream of lo-fi beats to relax/study to at 100% brightness via the recent update that installed Google Chrome as a non-Steam app and achieved 5:58. Reducing the screen brightness, disabling WiFi/Bluetooth, and playing less intensive games could all help lengthen the battery life. Still, they're all a significant decrease from the eight hours Valve promised. However, with the frequency of these constant updates, I would not be surprised to see it improve further before the first retail units make their way out to consumers.

Across the board, Steam Deck hits all the marks for a product line in its infancy that only has the potential to grow upwards. As Proton support grows and more titles become Verified over time, I honestly believe that the Steam Deck has the potential of carving out the portable PC market in a way that its predecessors have attempted. This is Valve's chance to break through to the mainstream audience and establish a brand new hardware line for the company, and it's made a lasting first impression on me. As the compatibility catalog grows in size, I won't have any reservations about throwing a Steam Deck in my carry-on luggage instead of a Nintendo Switch. I'll just have to remember to pack a spare battery or two for those longer flights. 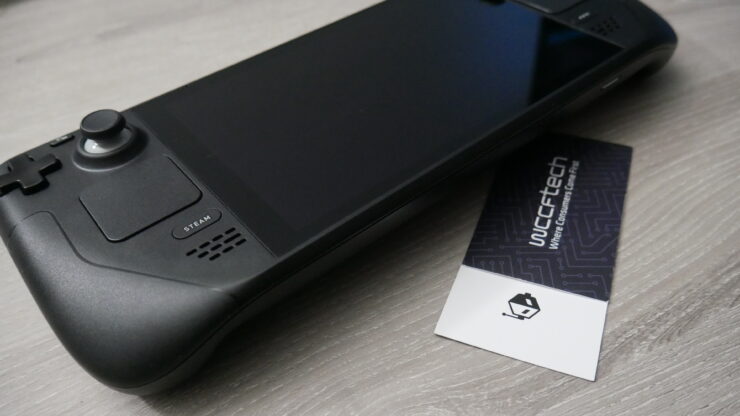