Starship Troopers is, and likely always will be, a film I love. There's no doubt that it has more than a few things you can criticise it over, but it's a very entertaining film with a lot to say about humanity. Very little of what it has to say is positive too. I could get political here and start saying which sections of culture it's representing, but we'll avoid that in the review. I will say that Starship Troopers: Terran Command looks to bring across this absurd view of false superiority and does it reasonably well, but there needs to be a good game too. Does it achieve this?

If you've ever watched the film, you'll know just how badly humans fare against the arachnids. The bugs can mow through battalions of the mobile infantry in a matter of minutes. The battle of Klendathu, partly covered by the tutorial here, saw one hundred thousand people killed in just one day, with a further two hundred thousand either injured or missing in action. My casualties here in Starship Troopers: Terran Command were far fewer as I fought the bugs on the mining planet Kwalasha.

The lack of casualties was undoubtedly the case for the first three-quarters of the nineteen mission campaign (not including the tutorial). The difficulty isn't so much a curve as a gentle slope leading to the side of a mountain. Still, even the most challenging missions only needed that bit of tactical thinking. Starship Troopers: Terran Command feels like it was designed for my tactical play style, the slow, methodical expansion with a strong focus on consolidation.

I only lost during one later mission, that being one of those where you don't have a base, you only have a handful of units, and you have to complete the objectives with what you've got. Essentially, think of the old commando-style missions in Command & Conquer. Even if I wanted to increase the game's difficulty, I wouldn't have simply due to how it is changed. Rather than making the bugs brighter or introducing a different type of bug, your damage is reduced to 0.75 or 0.5, respectively.

While most undoubtedly enjoyable, Starship Troopers: Terran Command is also seriously missing alternate game modes. One tutorial mission, nineteen campaign missions, and two alternate missions. That's it. There is no replay value because nothing changes. I'll never know why The Aristocrats and Slitherine haven't included a They Are Billions style mode; this is the perfect IP for that.

The lack of variety within the difficulty is a shame because Starship Troopers: Terran Command is far more tactical than I ever thought it would be. Your infantry units are weak; there's no doubt about that. If caught by the bugs, the bugs can tear them through in mere seconds. A lot of what the units rely on is positioning. Units can't fire through each other, so using good positioning and height to create kill zones is paramount. Add onto this the mixture of unit types and the value even the base riflemen have even at the very last moment of the game, and you have a game that truly rewards the tactical mind.

Only there are a few issues here and there. I'm not going to criticise the bugs and their zerg-rush tactics with little nuance elsewhere; that's very much canon. It's also canon (movie) that the people of the Mobile Infantry are incompetent, but they were able to shoot while running - this is something the majority of units here can't do, and it's annoying. Far too often, particularly as you're trying to attack an arachnid hive and trying to move through swarms of enemies, do you find you've got to inch forward, take out a wave, rinse and repeat. All while hoping the bugs don't get any reinforcements.

This limitation is made worse by the fact that you only ever have a limited number of units. You have a supply pool, and each unit costs a specific number of supplies (some also cost war support). Once the unit dies, the supplies return to you. The only way to run out is for the bugs to overwhelm all of your bases, but I've never had that happen. The issue is that supplies are always minimal, particularly as you're often forced into defending multiple or one massive front. War Support, also limited, is used to build defensive towers or buildings that allow for the deployment of more advanced units.

While I remember, there's another limitation during combat. While you can group units as in most strategy games, there are no formation options. If you have a group, it will simply put units in two rows, which is far from the best option. The only way to place teams in a proper formation is to do each unit singularly, a lot of work considering you will be forced to move them sooner than later. I suppose it's fortunate the bugs aren't the most intelligent things around, sometimes getting stuck on the terrain and each other. Though my soldiers also do that.

What else is there to cover? Starship Troopers: Terran Command hasn't got the best of stories, but I can't even argue that about the film. The cutscenes between missions aren't too dissimilar to those found in the movies and capture the feel of the world, linking into tasks that also capture the world Verhoeven wanted to create. One example is where you must rescue a prisoner to escort him to a base for public execution, defending the base until he's dead.

Linking into the missions is voice acting, which is campy and enjoyable both in and out of missions. Other aspects of the audio are also reasonably strong; everything feels like it belongs, which also applies to the visuals. Everything has a decent amount of detail which helps to bring you into the game, and I've had no bugs (aside from the ones I've had to kill).

All in all, I've enjoyed Starship Troopers: Terran Command. It's not an outstanding game, but it's good. More than that, it's fun and feels like the films. You could certainly ask for a little more, but as a fan of the series and strategy games, this is one I would recommend. 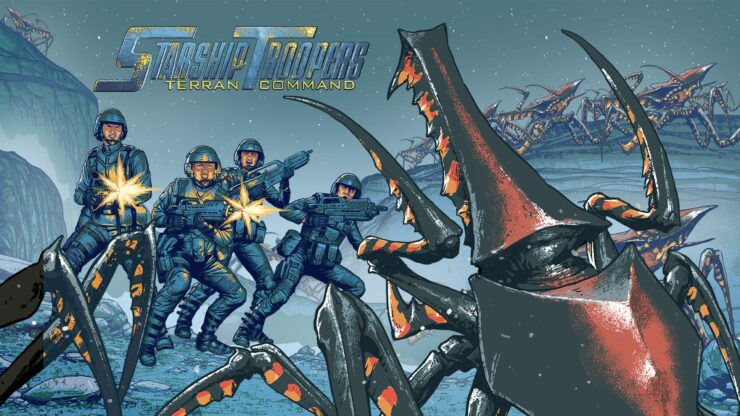 Starship Troopers: Terran Command is most certainly the game of the film. It gives off the same feel like the film and sticks very close to the source material with the use of bugs, the actions of the empire and the tactics of the Mobile Infantry; all that is an unequivocal positive. However, there are a few issues in gameplay. It feels like an older strategy game than it is, lacking some modern sensibilities, limited game modes, and featuring poor pathfinding. Still, despite these issues, it is a genuinely fun and strategic title that fans of the franchise will thoroughly enjoy, and general strategy fans should also enjoy.