You can’t blame people for being dubious, can you? As well-known as the Star Ocean name is, it’d be a stretch to call each – or any – entry in the series a masterpiece. It’s one of those long-lived and beloved franchises that’s always been too opaque to hit the mainstream while technical hitches upset even players of niche games. Star Ocean: Integrity and Faithlessness is on the way as the fifth mainline entry, and the game looks gorgeous, and reportedly fixes many issues that annoyed players in past entries, but is it true?

You assume the role of Fidel, who lives a modest life in a modest village doing nothing particularly important. At least, I assume it wasn’t important as the game fails in the most basic of introductions. It’s not long before Fidel and Miki, his conveniently-a-healer friend, set out on a grand adventure, first to save their village, and then to save their planet. At least, it sounds grand, but Star Ocean really fails to offer that kind of grand scope.

To start with, the world is actually very small, and you learn this as the game quickly wishes you to backtrack across its entirety. The first time through it feels so vast, but the second time quickly reveals how sparse all its areas are. “Harvesting” points litter the area but offer rubbish rewards, and enemies always spawn in the same areas, making backtracking a truly painful experience, only alleviated by the fact that you can see – and therefore avoid – all the enemies in front of you.

And as always, there issues feel like bigger disappointments because the game has a lot to offer. Combat in particular feels better than ever, with a wide array of battle styles across the cast of characters that you can swap in and out of easily. It’s a shame, then, how the fastest way to do things is to spam attack skills, with your only “strategy” usually going as far as “kill the heavy hitters first” and “guard when the enemy does that one strong move.”  But I was pleased to find that my battle style (the spam attack skills one) is catered to, with a Role built around lowering the MP cost of my skills so I could spam more, for longer. This was a nice way for the game to legitimize my cheap-feeling tactics.

Roles are essentially AI tactics you can equip to characters to alter how they behave, with status changes that suit that game style. With 4 Roles equippable to each character (and absolutely loads to unlock) you can comfortably build the character you want, though characters rarely work together, and character builds like “tanks” don’t really work, as the way aggro is handled is obtuse at best. This is particularly frustrating during sections where you must protect a single character, while all enemies automatically target that character. These sections become more a juggle of healing items, than strategic combat.

But away from that, I have to admit the game really does look quite strikingly beautiful. On PlayStation 4, Star Ocean: Integrity and Faithlessness runs at an average of 60FPS (with plenty of drops) at a crisp 1080p that really does help how good a lot of the game looks. A better-than-average lighting system is used, and light plays off of the shockingly detailed textures on the character’s clothing. It all comes together to make a really good looking JRPG, though in order to achieve this beautiful presentation obvious corners have been cut, with many towns, cities, and field areas built with jagged polygonal shapes. Buildings are as flat and angular as imaginable, with detailed textures. When it comes to geometry, many areas look PS3-era at best, with some even comparable to older titles. Perhaps Tri-Ace felt the high-quality textures would offset how very old some of the areas look, but instead it often just feels more jarring than ever.

So, beautiful graphics, decent combat, how’s the story? Err, what story? Sorry, there’s a story. Fidel and Miki find a young girl, Relia, while off on one of their adventures; the Kronos (evil space bad guys) want her so they can use her mystical powers for the advancement of their technology. I’m being brief, but at the same time, that’s a good summary. The Pangalactic Federation are here too, with outdated tech (that gets better if you draw on it, apparently) and are willing to help in your mission to give Relia a better life. Hours upon hours of the game is essentially you rescuing Relia, and then losing her, and rescuing her, and then things aren’t quite what they seem, etc. The story is generic, poorly told, and it’s a real struggle to care about any of the characters.

So after all that, should you play Star Ocean? Well, actually I say yes if you enjoy the genre. As terribly generic and uninteresting most of it is, I actually am quite enjoying myself. I realized that all I’m really doing is running from story trigger to story trigger, enduring the (always unskippable) dialogue and rushing into battles as fast as possible, but really, what else do I need? Star Ocean is shallow, a flash in the pan, a JRPG bereft of the scope that makes its peers legendary, but it still has attributes that are undeniably endearing. More like Star Puddle than Star Ocean, but puddles are great when you jump on them and they make a big splash, aren’t they? 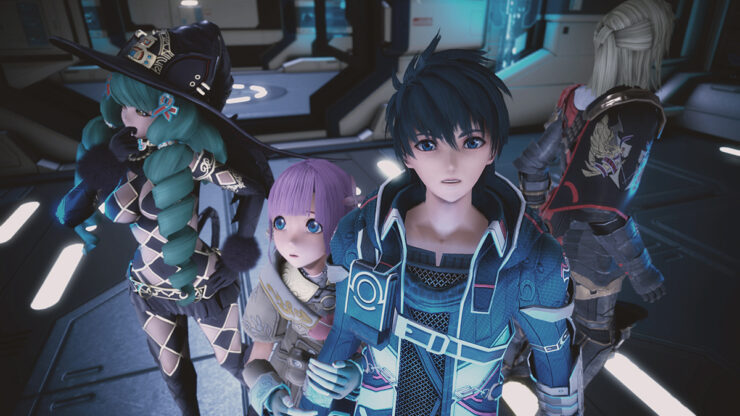 Star Ocean: Integrity and Faithlessness can be loads of fun, but also doesn't really offer anything new. Fans of action JRPGs such as the Tales series will find something to enjoy, but it's definitely not a game for everyone.