Sometime during the heyday of Square-Enix releasing their catalog of RPG’s on the PlayStation Portable came two Star Ocean titles. The duo, Star Ocean First Departure and Second Evolution, represented the first chance that many players would get to see the complete story of Ronyx J. Kenny and his son, Claude. Both were completely remade to work with an updated version of the second Star Ocean title’s battle system, bringing with them a number of visual and audio enhancements in addition to completely overhauling the combat system of the first Star Ocean. Now, a decade later, Star Ocean: First Departure has been rereleased on modern platforms with the new release of Star Ocean: First Departure R.

Unlike the view of two different protagonists in Second Evolution, Star Ocean: First Departure R focuses on a blue haired Roakian by the name of Roddick, a citizen of an underdeveloped planet that still relies on the magic of symbology and medieval weaponry to solve its problems. When an unknown mutagen attacks his planet, turning many of the residents to stone, he crosses paths with an Earthling captain that’s willing to forsake the laws governing contact with underdeveloped planets for a chance to discover a vaccine for this viral infection. That much-desired vaccine requires blood from the Patient Zero of the outbreak. Unfortunately, that source of the outbreak was captured some three hundred years ago. The solution? Travel even farther back in time and steal a sample of blood before the host goes missing. And such, the story of Star Ocean: First Departure R begins, in an underdeveloped world with two Roakians and two Earthlings to discover a cure.

Along the journey, players will have access to nine different party members that can join Roddick’s crew, but with only four open character slots, you’re going to have to pick and choose who gets the honor of joining the party. Many of these characters only offer up a single chance to be recruited before they’re gone forever and even those that can join you can conflict with other party members, so trying to recruit some of the more elusive characters like Erys will require some preparation. On the bright side, First Departure R isn’t a terribly long game, so future replays to set up the ideal team won’t take all of your time.

Clocking in at about twenty hours (roughly a little more than thirty for myself, between some extra grinding and clearing out the postgame dungeon), Star Ocean: First Departure R is what I’d consider a weekend-length JRPG. With how few plot points exist in the story, there isn’t a lot of meat for those that want a serious JRPG to enjoy. In fact, I’d say much of the time played is spent trying to remember how to run back to whatever town will advance the story. Until you gain access to fast travel from any port in the world to other major cities, much of your time will be spent running around and getting into random battles.

Star Ocean: First Departure R’s battle system is based upon its sequel, The Second Story, and the PSP remakes. It’s a real-time battle system where both friends and foes face off in a small arena. Each character utilizes both standard attacks as well as a pair of techniques mapped to the L1 and R1 buttons (even your AI partners are limited to only bringing two techniques to battle), with an obvious exception made for the few spellcasters in your party. Time stops when selecting items or spells and players can freely jump between any of the four party members at any time.

Unfortunately, the combat isn’t particularly great for the first Star Ocean title. Many fights end up resulting in spamming the same techniques over and over as these can often stunlock enemies and keep them from striking you back. I’d advise against bringing along any magic casters, as any spells they cast freeze time and force you to sit through the spell animation, breaking any flow of combat. An obvious exception can be made for healers but having to watch the same early 3D and sprite animation for a party-wide healing spell gets old after the first dozen times it’s cast.

Although there aren’t any selectable difficulty levels (not even after finishing First Departure R for the first time), the combat strikes a very strange difficulty curve with spikes that occur throughout the campaign. Incoming enemy attacks deal a surprisingly high amount of damage, so having to pause combat to cast a healing spell or choke down a couple of blueberries to heal will happen quite often. Grinding enough will reduce the difficulty down to a pitiful level where you can just mash on the L1 button to attack and never break a sweat. The combat techniques even automatically position your character and move them into place, so there isn’t even much need to try and be tactical about where you move around the battlefield if you just make the AI do all of the work and just keep attacking.

The deeper systems of Star Ocean: First Departure R exist in its Skill system and being able to level up your characters in unique fashions. Every level gained and some sidequests and story interactions will yield Skill Points that are unique to each character. These can be spent on basic skills such as ‘Aesthetic Design’ or ‘Whistling’. Each skill has at least one or two supplementary benefits. Many skills translate into statistical gains for your character (training in how to use a knife increases that character’s strength by a significant amount) as well as Specialty abilities, gained by leveling up two or three specific skills.

These Specialties are where the depth to Star Ocean: First Departure R comes into play. By utilizing these Specialties, characters can create new items and equipment. The combat items are all pretty basic, ranging from consumable bombs to cooked meals that can heal the user. However, it’s in the Customization and Blacksmithing Specialties that really can break First Departure R. These Specialties allow players to create new equipment, and if you use the right crafting materials (or have the patience to save and reload until you get the desired effect), you can easily create gamebreaking gear roughly halfway through the game. At that point, any semblance of game balance is completely ruined and Star Ocean: First Departure R goes on autopilot while you run through the rest of the story, at least until the postgame dungeon that caused me so much hassle over the last day.

Beyond the new character portraits, I couldn’t find much difference between First Departure R and the copy I own on PSP somewhere in my yet-to-be-unpacked collection. The sprites themselves are as crisp as I remember from the PSP and the rather-ugly world and combat environments stick out like a sore thumb on an HD console. Most of my review for First Departure R was played via PS4 Remote Play on iPad and PlayStation Vita, so I saw most of Roak on a much more portable screen. It wasn’t until I started playing First Departure R on a television that the brown and drab environments simply just did not look good for a supposed HD release.

Overall, Star Ocean: First Departure R is an average release of an even more average JRPG. The story doesn’t do much on its own but it does a fine job of setting up the future of Star Ocean with so many of the later games (also already available on PS4) building off of the story of Ronyx J. Kenny and the events on Roak. If you’re craving an action JRPG or just want to see how much you can break a game through crafting, Star Ocean: First Departure R’s an alright experience that won’t break the bank. Certainly play this one if for no other reason than to show your support for Star Ocean: Second Evolution to get the same treatment and get a Western release sometime in the hopeful future.

Reviewed on PlayStation 4 (code provided by the publisher). You can purchase the game on the PlayStation Store. 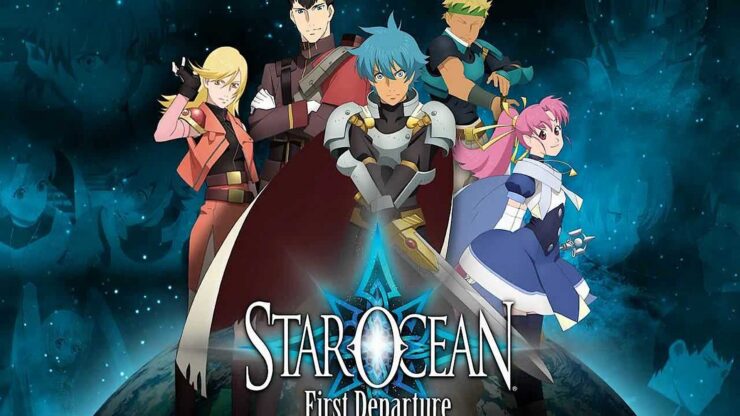 Calling First Departure R a full remaster is a bit of a disservice. Though the new character artwork and Japanese voice track are nice additions, this is still very much the same Star Ocean game that fans played a decade ago.