So it’s been two console generations since Fox McCloud last headlined a Star Fox game – in the time that has passed so many people have asked and begged for an HD remake of Star Fox 64, or something resembling what that game did. Now we have Star Fox Zero – not a remake, more a reboot of the series, and one that fans will likely adore.

The game opens in Corneria and deliberately acts exactly as the Nintendo 64 game did – with a few small changes. Enemies have been shuffled about a bit and there’s some new ones thrown into the mix, but what veteran Star Fox fans will notice is how the game subverts the expectations of long-time players. Near the beginning of the stage large blade-like enemies emerge from the water, causing Peppy to yelp “I’ve never seen anything like that!” almost as if he’s speaking for the player. Later on the branching path that many players remember has been changed – to activate the path now, you must transform and walk over a switch in order to open the doors forward.

It’s small changes like this that will entice older players, showing them that – yes – this really is the game you’ve been asking for, but there’s more now too! A boss battle later in the game seems to initially be the exact same as the one you met in Star Fox 64 – until suddenly, you switch to All-Range mode and it turns out that the fight is entirely different to what you’re used to. 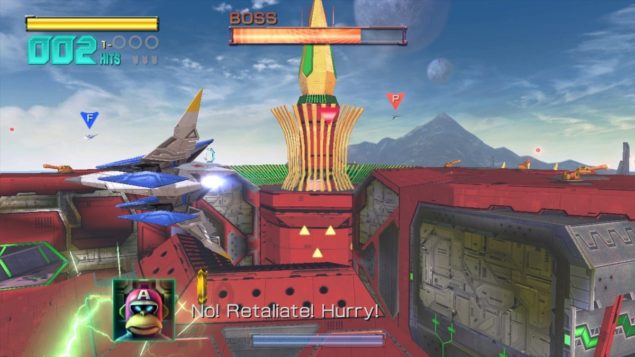 Away from the minor changes though, you’ll be forgiven for assuming, based on a few screenshots or some game footage, that this is more of a remake. In fact, Platinum and Nintendo have gone above and beyond to try and wring out every last bit of nostalgia you have. A lot of the sound effects for destroying enemy crafts are the same, the map of the Lylat System looks all too familiar and levels even begin with what sounds like an identical robotic voice saying “Good luck” as you blast into danger. Heck, even the conversations between Fox, Falco, Slippy and Peppy are incredibly familiar – if not outright the same script.

But the similarities are never an issue – they always feel like a throwback, not a replacement for quality. And Star Fox Zero definitely has quality.

The controls are hotly debated online already – despite the game not being out yet. Ever since the early previews, people were struggling to get their heads around the GamePad aiming functionality. Basically, the GamePad gives you a constant view of the cockpit, and the gyro acts as your aiming. This is great, as unlike in Star Fox 64 and other Star Fox titles you can fly and shoot without worrying about colliding with whatever you’re shooting. You can shoot to the left or right of your Arwing whilst flying straight forwards, and that’s just grand – the only time it feels fiddly is when you need to tap the Y button to centre your gyro. Flight is similar to what it always has been in Star Fox, change direction and height with the left stick, boost, brake and perform the legendary Barrel Roll with the right. Flying and shooting simultaneously can be difficult at first, but soon switching between the GamePad and TV view of the game feels natural.

One aspect of the game I’m a HUGE proponent of is the co-op play. Simply, one player can fly using the Pro Controller (or Wii Remote Nunchuk combo) whilst the other shoots using the Wii U GamePad. The two perspectives are really quite interesting. When playing with the Wii U GamePad, the game transforms into an arcade-style shooter – one in which you’re somewhat at the mercy of your friend’s driving skills. House of the Dead in the back of a Rally Car, basically. It’s loads of fun, but might result in a few shouts of “Keep if f****** steady!” 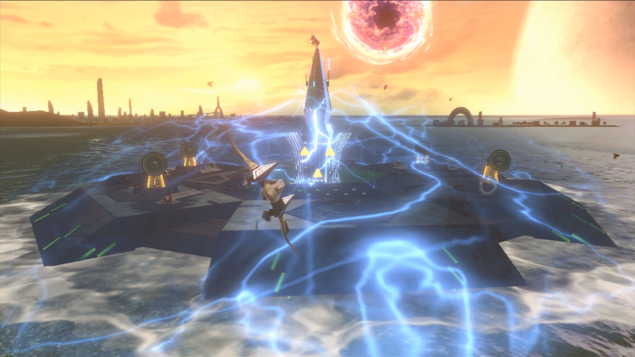 On the other hand, flying without concerning yourself about shooting is pretty leisurely - you do, in fact, have a method of firing totally separate to your GamePad-holding chum - you can fire directly ahead, just like the older Star Fox games. It's not much, but helps when your pal on the cannons isn't shooting where you want them to. You just keep an eye out for power-ups, get yourself into a good position every now and then, perform the odd somersault… It’s suddenly a more relaxing, less intense game. Unless someone is swearing at you to keep the Arwing steady.

The game, however, is only about two hours long. Three perhaps if you go back to find those alternate routes and hidden bosses – some of which are definitely worth going back for. Similarly to Star Fox Guard, I recommend it more highly if you’re playing with a friend, but unlike Star Fox Guard, Star Fox Zero offers a complete a hugely fun experience even when you’re alone.

On top of all this good stuff, Platinum Games have worked their magic into every corner here. If your Arwing flies really close to an enemy during a dogfight you might get a tiny, slow-mo scene which is undeniably similar to the opening of Bayonetta 2. Giant enemies are introduced in the classic Platinum style, and the sense of scale and wonder is constantly present. Platinum excel at making big games, that look impressive while playing brilliantly – and while not everyone is likely to agree on that last point, I can’t help but feel the controls have been sharpened to be as good as they possibly can.

Platinum Games may not have exactly knocked it out of the park with Star Fox Zero, but they’ve created a marvelously fun game that new Fox fans and those coming from Star Fox on the SNES will enjoy in equal measure. Great visuals, familiar sound design and nostalgic stages will please all age groups, and the new co-op mode offers hours upon hours of fun with friends.