“3D Sonic games suck” is perhaps the oldest, moldiest chestnut in gaming. It also isn’t particularly true. Sure, the chili-dog-scarfing hedgehog has suffered his share of embarrassing missteps in recent years, but the bad has been more than balanced out by solid titles like Sonic Colors, Sonic Lost World, and the nearly-great Sonic Generations. And yet, every new 3D Sonic title is still greeted with a queasy mixture of dread and bloodlust. How bad will the game be, and, more importantly, who can eviscerate it most savagely?

Enter Sonic Forces. The latest 3D Sonic adventure is in a particularly tough spot, as it follows only three months after Sonic Mania, a well-received throwback to the hedgehog’s unsullied Sega Genesis heyday (check out our review here). Ironically, the far more technically-advanced Sonic Forces now comes off as the dated product. Is there still a place in the race for 3D Sonic games? Or is Sonic Forces blasted by the past?

Sonic Forces makes an almost brazenly awful first impression. Right out of the blocks, the game dons a cheesy grimdark tone we haven’t seen since 2005’s unfortunate Shadow of the Hedgehog and revives all the dweeby sidekicks you hoped you’d never see again. From Charmy Bee to Espio the Chameleon, the whole hapless, hilariously-named crew is back. Well, except Big the Cat. You can decide for yourself whether that’s a good or bad thing.

Dr. Robotnik (I’ll never call him Eggman, and neither should you) has cooked up a new baddie called Infinite, who uses an all-powerful McGuffin called the Phantom Ruby to create clones, banish people to other dimensions, and do other poorly-defined evil things. Infinite defeats Sonic in their first meeting, allowing Robotnik to immediately roll over the sad sack sidekick crew and take over the planet.

The story picks up six months later, when your custom-created avatar (simply referred to as “Rookie” by the rest of the googly-eyed animals) joins the war effort against Robotnik. Turns out Sonic is alive, Robotnik’s just been torturing him in his space jail for the past half-year, so you stage a rescue, then start turning the tide piece by piece. Oh, and did I mention Classic Sonic is also hanging around for some reason? Because he is. Sonic Forces’ story doesn’t make a whole lot of sense, but I have to admit, I found the game’s writing less grating than most other recent Sonic entries.

It’s clear Sonic Team has genuine affection for their dopey menagerie of sneakered critters, and often it’s best to just get the tongue out of your cheek and play things straight. The Sonic series has never done well with humor, so Forces’ relative lack of snark and “clever” fourth-wall breaking feels like a blessing. And hey, sometimes a big, stupid, everything-counts comic book crossover can be fun. I just can’t hate a story that includes multiple emotionally-stirring fist-bump scenes and culminates in hundreds of sass-talking forest creatures facing off in a Lord of the Rings style battle.

It helps that Sonic Forces’ silly tale is generally well-presented. Cutscenes are slick, characters look sharp, stages are varied, and, most importantly, everything run at a nice smooth clip. Even the soundtrack isn’t terrible, replacing the nu-metal nastiness of previous Sonic games with fun pop numbers and the occasional retro tune. Oh, and Classic Sonic and his pudgy little belly are adorable-as-hell in 3D.

Creating your own Sonic fursona is also unexpectedly satisfying. My goal in any game with a character editor is to compose the ugliest/most awkward monstrosity possible, and I was quite pleased with the gormless, bug-eyed neon green cat I was able to create. At first, you don’t have many options for clothes, but you’re constantly awarded new duds for, well, pretty much everything. And, shock of shocks, there’s not a loot box in sight – in fact, Sonic Forces includes a “missions” list that makes it very clear exactly what you need to do to earn new threads. Nothing random here.

Sonic Forces features a roughly-equal number of Modern Sonic, Classic Sonic, and Avatar stages, with each character having their own unique play style. The Classic Sonic stages are probably the best, as the little guy moves more slowly and precisely, allowing for more intricate platforming and level design. Both Modern Sonic and the Rookie take the more recent rollercoaster approach, with your custom character also adding a grappling hook and arm cannon to the mix. These stages have a tendency to take control out of the player’s hands, and arguably have more in common with Guitar Hero than a traditional platformer. Stuff flies at you and you press the homing attack button or dodge left or right at the right moment, and that’s about it. This isn’t necessarily a bad thing – 3D Sonic is best when it keeps things simple.

It’s taken a while, but Sonic Team have really narrowed down what works in these types of games. The 3D stages are slick, simple thrill rides, while almost all the more complex platforming is assigned to Classic Sonic. Those infamous modern Sonic rough patches, where bad camera angles, physics, or level design would send you plunging repeatedly to your death, are almost entirely absent here. Frankly, this may be the least frustrating Sonic game I’ve ever played. Even the 16-bit classics would regularly get on my nerves, but Sonic Forces was smooth sailing nearly all the way through.

Sonic Forces’ stages are also surprisingly creative. This is a game where you may suddenly be swallowed by a giant snake, find yourself walking on the ceiling, or have to take down a towering robot with your grappling hook Battle of Hoth style. This creativity extends to the game’s bosses, which are plentiful, varied, and entertaining. Some are essentially souped-up versions of classic bosses, with Robotnik’s war machines now standing stories high, while others make smart use of the “Gotta go fast!” theme by forcing you to chase down bosses as they throw obstacles in your path.

Honestly, the level of design at work in Sonic Forces almost reminds me of a Platinum Games title. I’m sure that statement just made a few heads explode, but I’m not being glib. Sonic Forces is nowhere near as demanding or intricate as a game like Bayonetta, but it has that hyperactive “throw everything at the wall” mentality Platinum games have. Unlike some lesser games in the franchise, there’s nothing cynical about Sonic Forces – I felt like Sonic Team was doing their best to entertain me every minute I was playing.

Sadly, that playtime didn’t last long. It only took me around four hours to blast through Sonic Forces’ story, but there are also red rings to collect, extra stages to unlock, and beating the game grants the ability to create and outfit multiple characters. I could quite easily see somebody who enjoys Sonic Forces spending a good 10 to 12 hours with the game. Still not huge, but the game is being sold at a budget $40 and is free of any pesky microtransactions. And hey, it’s not like short Sonic games are anything new – fans should be used to those premature credit screens by now.

This review was based on a PS4 copy of Sonic Forces Bonus Edition provided by publisher Sega. You may purchase the game on Amazon. 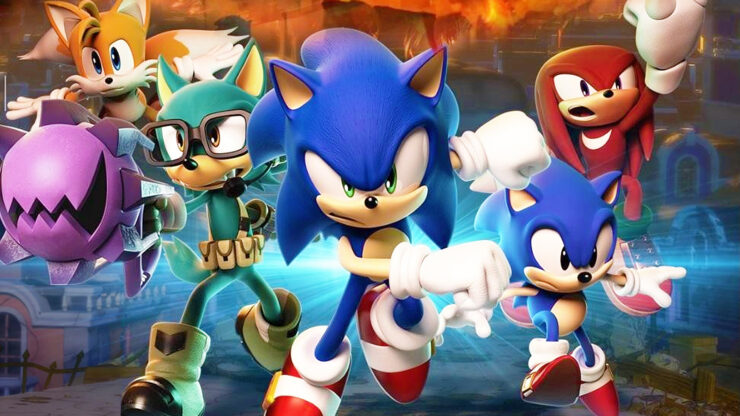 2017 is the year the Sonic franchise stops running from itself. Sonic Mania and Sonic Forces celebrate different eras, but they both take the same shameless “all-in” approach. Sonic Forces is a confident game, serving up a story and stages that go for broke while dodging the pitfalls of the past. As long as you’re not a hardline 3D Sonic hater, this earnest, entertaining adventure is worth a spin.