Solasta: Crown of the Magister

Role-playing games have been a thing for a very long time, way before gaming systems had the power to run a  decent digital adaptation of any of them, but it's only been in relatively recent times that developers managed to create proper Dungeons & Dragons inspired video gaming experiences. Following the release of the original Baldur's Gate, many developers tried to create the perfect adaptation of the iconic tabletop role-playing game with varying degrees of success. Yet not many of these games manage to be as faithful to the Dungeons & Dragons ruleset as Solasta: Crown of the Magister, whose faithfulness is both its strongest aspect and biggest flaw.

Developer Tactical Adventures never tried to hide their intention of creating an almost perfect adaptation of the D&D 5e ruleset, and it shows right from the very beginning of the game. From character creation to mechanics, playing Solasta: Crown of the Magister is the closest you will get to play D&D without real people.

The game starts like any real D&D campaign would: in a tavern, where four different adventurers meet for the first time, attracted by the prospect of riches and glory or just for the excitement that comes from a new adventure. After a relatively short intro section, where players are taught the very basics of movement and combat, the real adventure starts, as the party sets out from the town of Caer Cyflen to investigate some mysterious happenings that may endanger the town, not knowing they will have to deal with all sorts of hellish creatures in their 40 plus hours long quest.

Right from the start, it's clear how Solasta: Crown of the Magister's story is not the game's best feature. The plot is rather predictable, and it really doesn't stray too far from fantasy tropes, featuring the usual assortment of characters and creatures we have seen in countless other RPGs. It's a shame that the story plays it so safe, as some of the lore behind the world of Solasta is quite interesting, as it actually reverses a trope we have experienced in The Witcher saga and a few other franchises: in Solasta, it's the humans that have invaded the world following a magical cataclysm, and not the other way around. Too bad this isn't further explored in any meaningful way during the course of the adventure.

This isn't to say that Solasta: Crown of the Magister doesn't try to do something new. Unlike most other cRPGs out there, the player can create their party of four adventurers from scratch before beginning the adventure or pick between a few pre-made characters. All party members are essentially the main character, as they get equal saying in the dialogue system, and they always take an active part in the story.

Character creation is definitely one of the game's standout features. While the visual customization options are somewhat limited, and most do not look great at all, the mechanical customization is incredibly deep. Together with picking the characters' races and classes, which are a pretty much 1:1 rendition of the D&D 5e races and classes, players can also pick the characters' moral alignments and traits based on these alignments, which influence the dialogue options that become available at certain points. It's not a massive game-changer, to be honest, but it does add a little bit of replay value, as it lets players experiment even outside of combat.

Things, however, may take some time to get going. Due to its faithful adaptation of the D&D 5e ruleset, it can be quite hard for newbies to understand everything with the in-game tutorials shown every time some new mechanic is encountered for the first time. The game does feature a digital rule book that provides a thorough yet easy to understand explanation of pretty much every mechanics, but if you have never played D&D before, you will feel overwhelmed at the beginning, being unfamiliar with the countless magic spells and special powers of each class. Thankfully, Solasta: Crown of the Magister features a very good difficulty system that lets the player tweak a lot of different elements, like removing critical hits and so on, so that even D&D newbies can learn the mechanics at their own pace without getting obliterated every single fight.

While the party system would have lent itself to a great multiplayer experience, Solasta: Crown of the Magister doesn't feature any co-op. However, it does feature a way for players to share their own experiences in the game via the Dungeon Maker. This in-game tool is a potent yet simple to use map creator that lets players come up with their own dungeons. Some of the creations made in the Early Access period are incredibly interesting, so it will be nice to see what players will be able to come up with the 1.0 release.

Having been developed by a small team, Solasta: Crown of the Magister doesn't feature a big-budget presentation. The character models look extremely simple, and so do most of the locations, which do not stray too far from the usual fantasy selection of abandoned forts, caves, dungeons, volcanoes, etc. As a side-effect, this means that most players with a relatively recent machine will not have troubles running the game decently at fairly high settings. The PC used for the test, powered by an i7-10700 CPU, RTX 3070 GPU, and 16GB RAM had obviously no trouble running the game at 4K resolution, 60 FPS with all maxed settings. One thing to note is that the game loads very slowly on mechanical hard drives, so installing the game onto an SSD is very recommended.

The strict adherence to the D&D 5e ruleset is both Solasta: Crown of the Magister's greatest asset and greatest flaw. While D&D fanatics will love every second of the game, despite some issues here and there, mostly caused by the vertical design of most combat maps that seems to force certain ranged attacks, magic-focused playstyle, those who are not into the tabletop RPG will find the game somewhat stiff, trapped in this ruleset that has been so faithfully adapted. Solasta: Crown of the Magister is as solid as any cRPG can get, possibly even more than most, but it's definitely not a game for everyone. 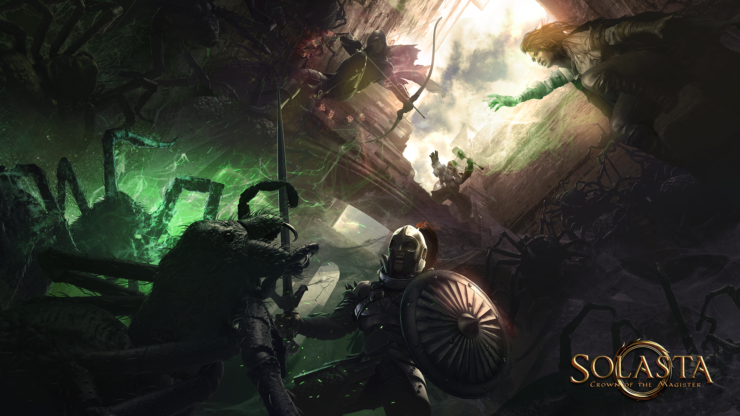 With its extremely faithful rendition of the Dungeons & Dragons 5e ruleset, Solasta: Crown of the Magister is a dream come true for all those D&D fans who also happen to love video games. However, strict adherence to this ruleset is also the game's main flaw, as it results in an overwhelming experience for all those who do not live and breathe Dungeons & Dragons. Those who power through the initial difficulties, though, will find a solid cRPG featuring great tactical combat and amazing depth.