I always need more controllers, only these days they're pretty expensive. Official PS4 controllers are often £50+, and the same goes for the Nintendo Switch Pro Controllers. And don't get me started on Xbox Elite controllers, modded esports controllers, and more. The prices are just too high for me to justify, especially when these controllers will inevitably be used in the few moments where people are around and we bust out multiplayer games. That's why when a budget-friendly but comprehensive and comfortable controller releases like Snakebyte's Game:Pad Wireless 4S, you should take notice. And you should know that the Game:Pad Wireless 4S is one of the most affordable and enticing options available right now when it comes to PS4 controllers.

The Game:Pad 4S is everything you would expect. It has four comfortable face buttons, two large triggers, two clicky shoulder buttons, a touchpad, two large and comfortable sticks, Share and Options buttons, and finally, a fully-connected d-pad. A rarity on PlayStation controllers. The things it lacks when compared to an official PS4 controller includes the light bar, which is either meaningless or beneficial to you, and gyro controls, which is either meaningless or a minor con for you.

No light bar means some functionality goes out of the window. Signing into your account with the PS4 Camera, for example - though that's a minor point, and as an aside, I managed to make it work using the controller's LED-illuminated Home button, somehow. Games like The Playroom and PSVR titles are probably a much bigger concern. The PSVR compatibility is hampered even further thanks to a lack of gyro controls, but for me, the biggest impact this had was no motion-controlled typing on the PS4's on-screen keyboard.

Those are the features the controller lacks, and now that that is out of the way, it's time to talk about the pros. Frankly, I have always had a tepid relationship with the DualShock 4. It's definitely a good controller, but it's hardly my favorite, and I found the Game:Pad 4S to be more comfortable overall. The sharp ridges of the controller slide into my hands with shocking precision, making it feel incredibly ergonomic. My index fingers naturally land on the triggers, and the grooves of the controller fit into my palm perfectly. This is an incredibly nice controller to hold in the hand, even though it feels alien at first if you're used to the DualShock 4.

That alien feeling did carry across to certain games. In Apex Legends, which I play regularly, I had the most trouble. The connected d-pad ended up in a few incorrectly pressed buttons, and the minor layout changes ended up feeling like I was using the wrong control scheme entirely at times. My muscle memory when playing the game is simply adjusted to the DualShock 4, for better or worse, and I couldn't comfortably use the Game:Pad 4S in that game for that reason, but it was all my fault, aside from one thing. The Options and Share buttons are placed just below the touchpad, and are soft, rubbery buttons. You can't immediately feel the input being registered because of that, and my thumb had an awkward time reaching around the control sticks to press it. Frankly, it felt hard to believe that I could press the button without touching or moving the control stick, at least a bit, and this was frustrating. However, aside from that last point, all of this comes down to personal preference.

When playing any game aside from those titles which required ingrained muscle memory, the pad felt great. When pushing and pulling blocks in Catherine: Full Body it felt natural and fine. When playing Downwell the d-pad felt good, although admittedly a little unfamiliar. While tapping away to Persona 4: Dancing All Night, the controller held up shockingly well considering it's a game I usually consider to require precise inputs and some muscle memory. As long as I wasn't playing a game that required reflexes and muscle memory, I adjusted quickly and found the controller to be comprehensive and comfortable.

But not everything is perfect. The fact that the recognizable PlayStation symbols on the face buttons are gone in place or "CROSS," "TRIANGLE," etc. written out is regrettable, and gives me no excuse to say X as "ecks" instead of "cross." The rubber on the top of the sticks also feels a little hard and cheap, but with some wear, they'll likely feel more comfortable. The clicky shoulder buttons will be a matter of taste, but I like the instant feedback of a harsh click. The triggers are fairly large with a good amount of travel and pull down smoothly. Some might complain about the touchpad being a bit smaller here than on the DualShock 4, but honestly, I prefer it. But again, these complaints are pretty minor.

But most importantly, of course, this is a wireless controller, and when stacked up against playing games with a DualShock 4, I found no detectable traces of latency. No, I didn't use any specialized equipment, only my gut instinct, but no matter how fast-paced I found a game to be, the controller responded great, though it was tested in a fairly small room, and different environments could hypothetically cause an issue, though I do not have that impression. 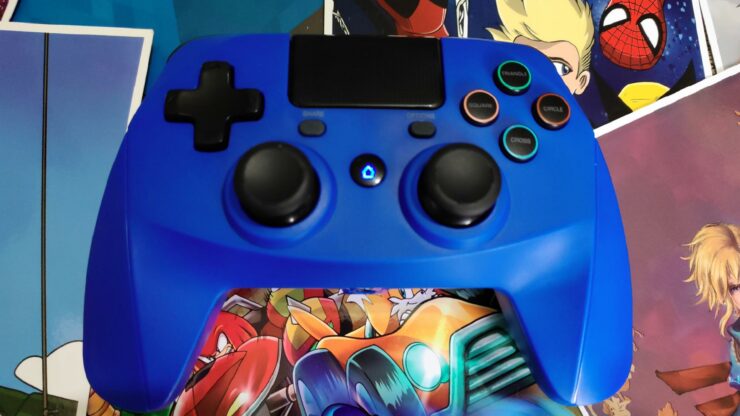 You can find things to complain about with the Snakebyte Game:Pad Wireless 4S, but only when comparing it to a more expensive controller. For the price it's sold at and the value it offers, the Game:Pad Wireless 4S makes a fantastic value proposition and would be my recommendation to anyone looking for a second controller, or a cheaper replacement for your primary. If you don't have any need for a light bar, gyro controls, or PSVR games, then this is a fantastic option which is well worth your money - and the wired version is even cheaper.