It's been nearly nine years since gamers last stepped into the stressed jeans of one Sam Stone, the titular Serious badass of the series. Set in the idyllic backdrop of Western Europe, from Rome to France and beyond, it's up to one member of the Earth Defense Force to save their mother Earth from a massive alien attack in Serious Sam 4.

Serious Sam 4 opens in the midst of an alien invasion on planet Earth, dropping thousands of enemies in a definitive assault meant to squash out any human resistance in one fell swoop. This introductory mission gives players a feel for the action right away without having to wade through story exposition, found notes, audiologs, or any of that modern FPS nonsense. No, you're just given a big gun and told to start blasting as your first introduction to Serious Sam 4. After that opening act, the game rewinds time and sends the clock back less than a week to explore the events leading up to that climactic battle. As Sam Stone, you're given a knife, a pistol with an unlimited ammo supply, and sent on your way to go fulfill the most standard checklist of FPS tasks to propel the story along. In Serious Sam's typical fashion, it's about killing as much as you can and spitting out cocky one-liners at just the right time. 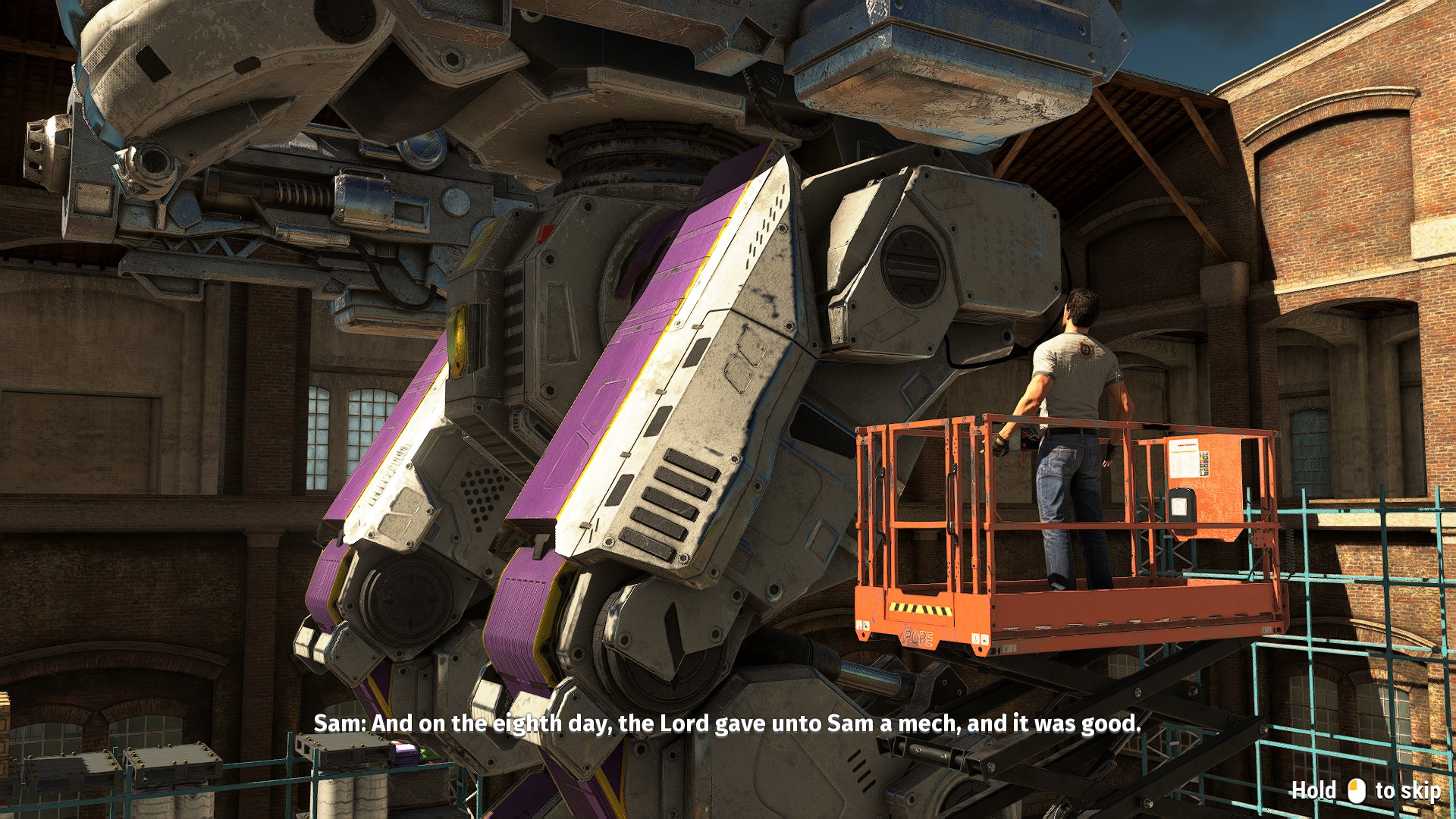 As first-person shooter heroes evolved, most dropped the one-liners and quips to instead take up the mantle of something regarding a serious story. That's certainly not how things work for Sam Stone and his hodgepodge Earth Defense Force. With a new rookie named Kenny that's eager to join the fight, Sam's posse tries to teach the new guy the ropes about the proper etiquette of the How, When and Why to drop one lined zingers after defeating an enemy. It's a cute moment in the midst of gunning down legions of enemies and Serious Sam 4 finds ways to keep layering in dumb referential jokes and stale one-liners at just the right time that I was willing to give them a pass for at least trying to lighten up the mood. Of course, when you die and die and restart your save a few times, you start hearing those quips at the same time every time and that ruins the magic. That being said, at least Sam has some charm to him and he isn't just some mute protagonist with a big gun or two.

Serious Sam 4's key new feature is in the inclusion of something the developers have dubbed the 'Legion System'. This gives the overworld maps the ability to spawn in hundreds (they claim thousands but aside from the climactic opener, no other level has come close to matching the body count) of enemies at a time. When the enemy count rises and you've got enough ammo in your pair of miniguns to handle the incoming wave, that's when Serious Sam 4 really shines. It takes the mundane style of combat and ramps it up to absurd levels as you have to fend off hundreds of braindead AI enemies that are all out for blood. There's just something about the mass combat in Serious Sam 4 that satisfies that same part of my brain that's tickled whenever a new Dynasty Warriors game drops. 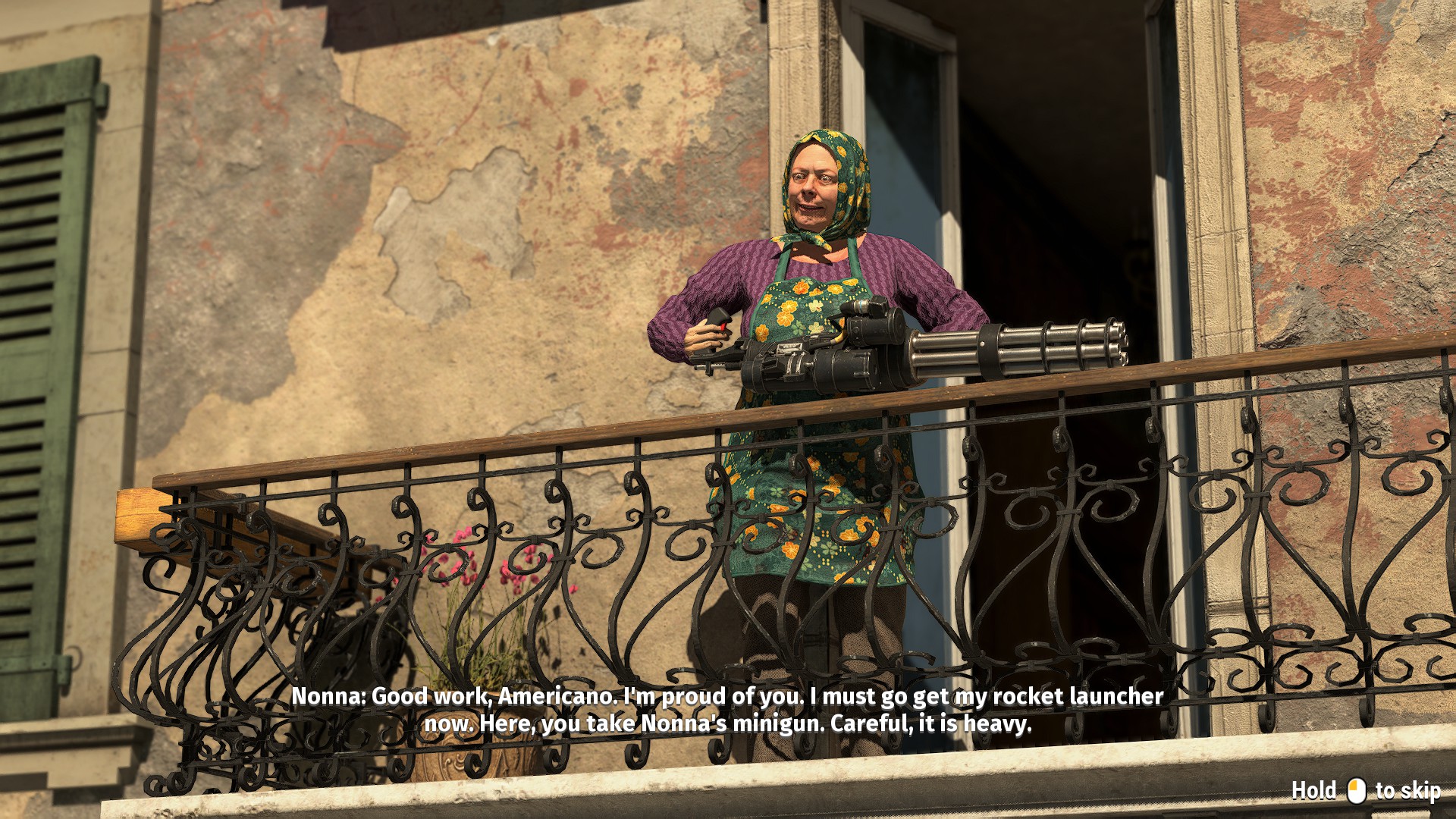 In order to handle so many enemies on screen, there has to be some concession to the AI, which is true for the most part. Unfortunately, the enemy AI is just as stupid when there are only one or two on-screen as well. Most grunts will do nothing but run directly at the player, which is certainly nothing new for the series. Just take a look at the Beheaded Kamikaze, a headless guy that's taken up playing Edward Bombhands with his chums and has been a series staple from the beginning. His only motivation is to run directly at Sam and blow up, all the while screaming nonstop to announce his arrival. Hell, Croteam is probably still using the same audio clip of the Kamikaze scream for the past decade.

When you're fending off hundreds of enemies, having a predictable AI can lend to the fun of approaching Serious Sam 4 as a shooting gallery. When you have the firepower, the skills, the open space to back away or find a vantage point, that's when Serious Sam 4 is at its best. I started off the adventure on Hard mode, as I do with most shooters, and the scores of enemy foes were just too much to juggle. The mindless grunts and smaller enemies were fine to deal with and the new enemy types, such as the Belcher, added in a few other attacks to dodge but it wasn't much of a challenge overall. However, once you start getting hit from enemies off to the side or from a charging bull that somehow spawned behind you, that's when the action doesn't hold up. The Kleer Skeletons are perhaps the worst offender on higher difficulties, what with their incessant lust for charging directly at the player or lobbing awkward bolas that deal an absurd amount of damage. No, I'd say swallow your pride, drop the game down to Easy mode (or Tourist if you simply just want to enjoy the story and near-limitless firepower) and get to work.

Serious Sam 4 is no doubt the best looking game in the series, with Croteam taking the past few years to explore interesting rendering and design techniques to make the Western European countryside look its best. They spent all of this time developing sprawling open world maps for the second half of Sam Stone's story but in all honesty, did Croteam really have to? The first half of Sam's story takes place in the typical corridor level design of labyrinthian cityscapes that have abnormally wide roadways and alleyways to traverse. These give plenty of funnel chokepoints to bring the enemies together under the aim of Sam's double-barreled shotgun. When you take away those walls and venture into the open countryside, that smart level design is stripped away and you're left with a mostly barren landscape filled with enemies to shoot but without real points of interest.

The first time I hopped onto Sam's motorcycle and rode around to the objective of the mission, I barely found any reason to explore or see the sights of this multiple square kilometer map. When I finally came across a turning point that could lead me to an ambushed convoy and unique consumable gadget, there were signposts explicitly guiding me to this point of interest, not something that I should've stumbled upon organically at my own pace. Sandbox levels should give players a reason to turn off the beaten path and explore around for a moment or two, but I never got that desire for exploration in Serious Sam 4. Instead, I just saw a wide open field to kill a few dozen alien invaders. 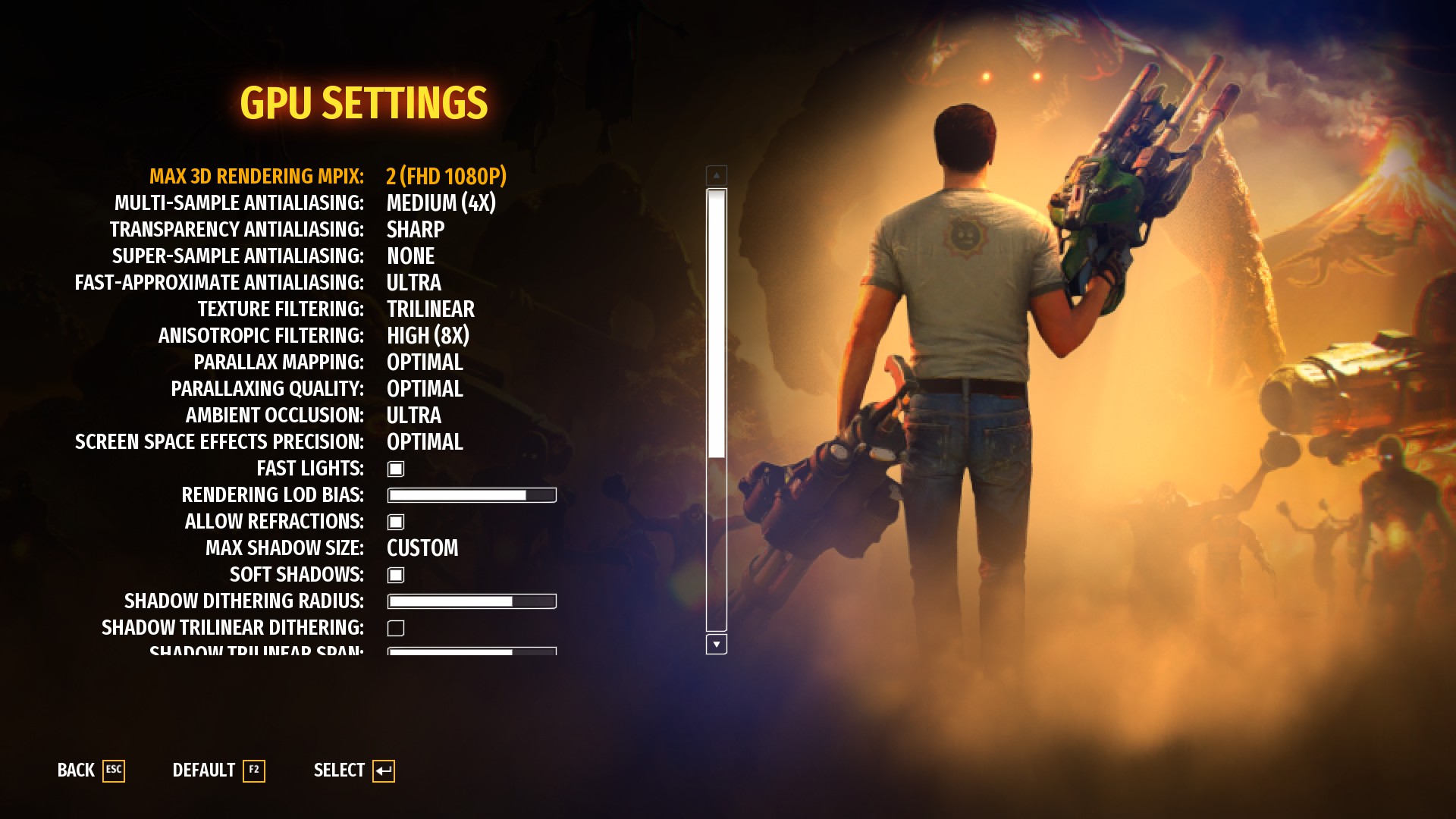 Sam's shooting gallery definitely has its moments of feeling like a true badass throughout the story, typically when Sam gets gifted the keys to some giant tool of destruction like the Popemobile 2.0. These set pieces are quite notable but if there's one moment that really stands out for the player, chances are Croteam is going to use it again sometime later in the story. Not more than an hour after purging the Vatican of alien scum in the Pope's blessed bipedal robot, I was given yet another mech that could do the exact same attacks in the next chapter. At least jumping into a combine harvester and running down dozens of enemies remained a unique plot point.

There's a pervading level of jank to Serious Sam 4 that I couldn't get out of my mind as I played the game. The usual pop-in of trees and objects served as minor distraction from the huge open maps that Croteam developed and I could never figure out the right settings to make the game run as smooth as I wanted. On a Ryzen 7 3800X and GeForce 2070 Super, I could manage around 90 FPS at 1080P but couldn't get much better than that for any sustained periods of time. Even with hundreds of enemies, I never saw the performance dip down drastically but I never felt like I was getting the full potential of my PC setup in terms of frame rates and performance. If you want to dig down deep enough, Croteam lets players take full advantage of the various rendering techniques to get the best possible performance out of the game but I settled for trying to run with the suggested settings that Serious Sam 4 autodetected for me.

Serious Sam 4 loses some of its pacing midway through with the shift to open world maps but nevertheless, Croteam has come up with a rather amusing shooting gallery to explore. It's not one of the best first-person shooter campaigns you'll play this year but it's a good palate cleanser from all of the super-serious games dropping on the new consoles. If you just want to bust out the big guns and kill a few thousand aliens, Serious Sam 4 could use another badass like you in the ranks.