Senran Kagura is a series synonymous with busty ninjas and certainly has a cult following around the life and hometown this series represents. From side-scrolling action games to cooking-themed rhythm games, there’s so much that these ninja girls will do for the sake of fun. With Summer slowly transitioning into Autumn, there’s time for one last trip to the beach, bikinis and all. While having some fun in the sun, why not bring out the super soakers and turn the weekend into a tournament of skill? That’s just what the thirty-plus girls will do in Senran Kagura: Peach Beach Splash, a third-person shooter where the goal is to have fun and get a little wet.

When I first laid eyes on the premise for Peach Beach Splash, I had my silent hopes that this would be something in the same vein as Splatoon with busty anime girls. However, those hopes were quickly dashed when I discovered that this latest Senran Kagura adventure was a traditional third-person shooter wrapped up in a fun day at the beach. There’s no turf war or trying to spread as much of your team’s watercolors on the map for control. Instead, take aim and blast the enemy team in the face with your water cannon for maximum effectiveness.

No matter which Senran Kagura girl is your personal favorite, she’ll be around in full glory in Peach Beach Splash. Divided up into half a dozen teams, the various Academy students are competing for glory and to fulfill their one wish, whatever that may be. Set up as a gameshow across multiple episodes, Peach Beach Splash’s campaign offers the innuendo-driven dialogue and humor the series is known for. It wouldn’t be a proper Senran Kagura title without costume customization, so have fun in the dressing room, you silly deviants. 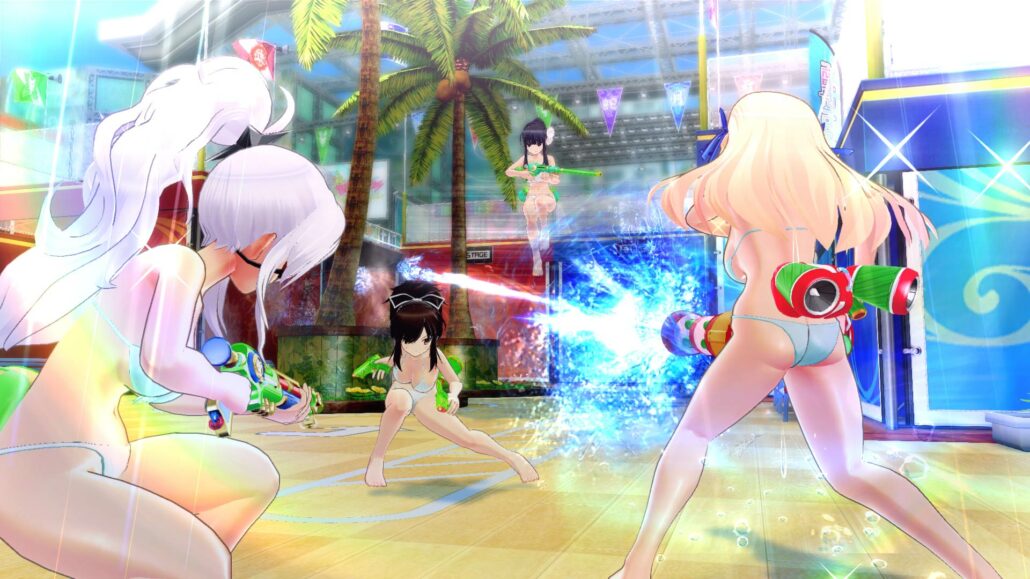 Everything from the hairstyles to swimwear and even awkwardly-placed sushi rolls can be utilized freely to customize each shinobi contestant with their own unique style. There’s a wide arrangement of unlockable costumes as well as DLC costumes that are more titillating than anything the ESRB should’ve approved in good taste. Or you could just make everyone dress up like Katsuragi and be my hero, I won’t judge. Just be mindful of where you stick that futomaki roll...

For the Peach Beach Splash tournament, the only limitation is that the female contestants aren’t allowed to use their shinobi magic or weapons. So, put down those swords and pick up a water cannon. Or dual super soakers or water sniper rifle or grenade launcher. How any of these passed the certification phase to be used in a beach tournament is beyond me, but they’re certainly effective at what they do. Once an enemy ninja is knocked out, you can further humiliate them by hosing them down with a rubber ducky that shoots out water (which can be upgraded with other ‘fluids’ later on). It’s just as creepy as it sounds, but if you’re just looking for a competitive shooter without those extra saucy bits, they can be toggled off.

On the higher difficulty levels of Peach Beach Splash, rather than taking raw skill into account, the difficulty comes by way of increased numbers. Even if you’re an expert soaker and adept at evading incoming attacks, you’re bound to get knocked out in a couple of hits. I tried this for myself by seeking out hard mode missions during my first playthrough as the Gessen academy team and found myself stuck in battles of attrition. Unless you power up your cards and ninja’s health pools, you’re going to be swimming in low damage attacks that just won’t prove to be very effective. 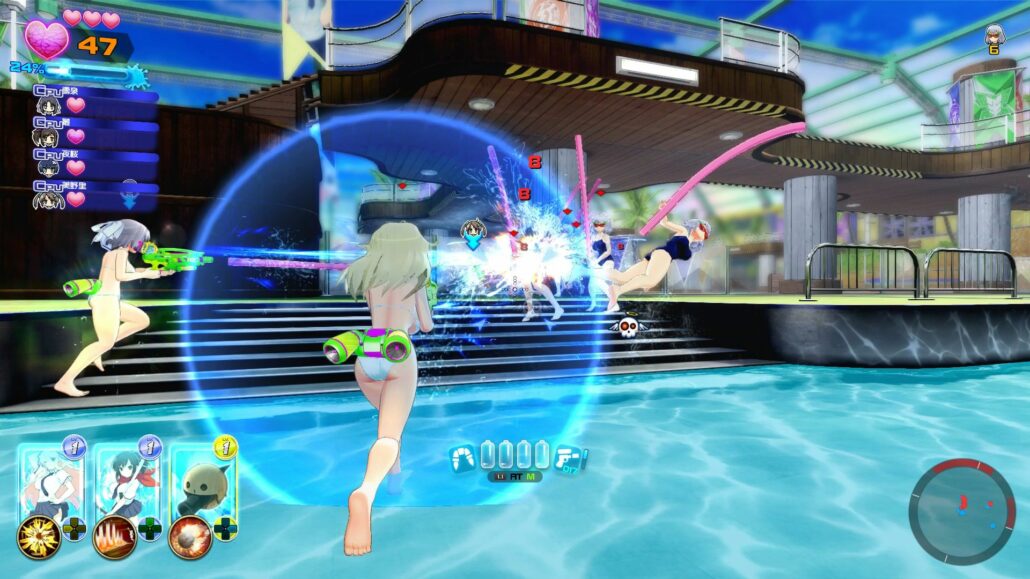 To power up your shinobi arsenal, everything comes by way of cards. These extra boosters can be purchased via in-game cash and come in different flavors depending on how far you’ve progressed through the story. By acquiring duplicate cards, these are instantly converted into a form of power currency that is used to bolster both shinobi girl and gear alike. As different battlefields call for weapons in both long and short-range varieties, it isn’t recommended to invest all of your upgrades into a single weapon type. Be diverse, branch out a little bit, and try out some of the weirder weapons like the futomaki bazooka. The weapons aren’t as diverse as, say, Splatoon’s, but they each have their uses and can get your opponent just as soaking wet with proper care and usage.

Peach Beach Splash’s online modes take full advantage of those cards and time invested into leveling up your favorite shinobi lass. My first few matches in Online Play were an exercise of patience, between getting sniped by water cannons across the map or max rank skill cards. If I was going to stand any chance online and not get soaked,  I had to do a few more of the story routes and Paradise Episodes in order to gather up enough cards to bolster my skills and temper them into more powerful variants.

It’s hard to quantify Peach Beach Splash as a shooter without focusing on the sexual innuendo that makes the series so unique. Without the appeal, it’s an above-average team shooter that swaps railguns for squirt guns. However, it’s the life and hometown that these ninja girls embody that makes Senran Kagura such an endearing series, even if you might have to wait for the sun to go down before you start playing.

For those looking for some (not so) clean fun in the sun, Senran Kagura: Peach Beach Splash gives the series a reason to return the beach and wish this summer vacation would never end. It's an enjoyable shooter, as long as you don't expect it to be a serious one.