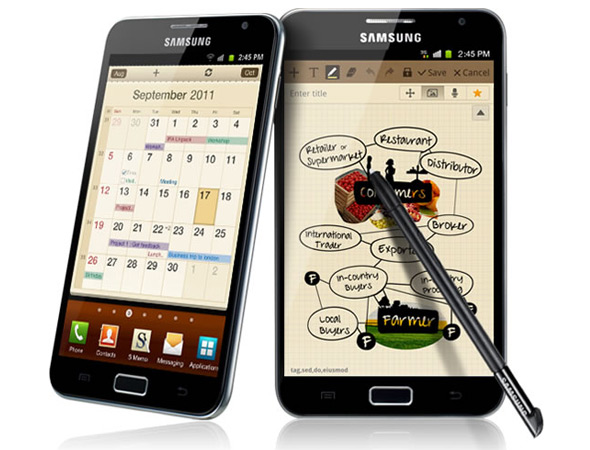 2011 has been a supremely successful year for Samsung. With both the Windows Phone and Android end of the smartphones achieving unprecedented success levels, it has become rather easy for Samsung to experiment somewhat, a luxury not all OEMs can afford. Fresh off from the Galaxy S2, the Galaxy Note aims to fill the gap between tablet and smartphones. Samsung wont be the first brand to try this, Dell already did it last year with the Streak. However the clunky body and bugged software pretty much ensured the device was a failure at launch. Has Samsung managed to avoid these perils? Let's find out!

Save for its size, Galaxy Note looks pretty similar to the Galaxy S II. On the front you have the massive 5.3" screen. Beneath it is the physical home button along with two capacitive buttons. On top is the usual array of sensors along with a speaker. To counter the massive size of the screen Samsung has made the bezel really thin to make the phone as pocketable as possible.

The battery cover has the same pattern we saw on the Galaxy S II. It gives the phone a somewhat premium look and feel when compared to glossy back phones. On the left side is the volume rocker key and opposite it on the right is the power button. Both keys have adequate tactile response.

Galaxy Note weighs a sizable 178g, which is quite bulky for a cellphone, but when taken into account the screen size it puts those grams a little into perspective. As for dimensions, it's a good 21mm bigger in length and width compared to Galaxy S II. Samsung has done a rather brilliant job keeping thinness to its minimum at 9.7mm.

So is Galaxy Note usable as a smartphone on a daily basis? It's a little tough to answer it. Purely as a smartphone it's far too big to be practical. Even the biggest of hands will have trouble wrapping it around the palm. Back in the day Galaxy S II pushed the boundaries of how big a smartphone can get and with Galaxy Note those are pushed even further. Potential buyers should check it out in a store before committing to it.

The big elephant in the room is the sizable 5.3" SAMOLED screen that supports a resolution of 1280x800. Being an OLED display means infinite contrasts and being a Super OLED means saturated, punchy colors. Brightness is adequate and the screen behaves excellent under sunlight. At 285ppi it's nearly impossible to make out individual pixels but we are talking about a pentile matrix display here. Under certain colors you can make out the grainy pattern but under normal use it shouldn't bother you. Complaining about PenTile would be nitpicking, the fact is Galaxy Note has a beautiful screen and should please anyone who uses it.

Galaxy Note runs version 4.0 of Samsung's TouchWiz UI. If you're a fan of TouchWiz then you'll love the UI of Galaxy Note. The lock screen has gone under slight modification from Galaxy S II however it still maintains the same principle; slide anywhere to unlock.

The homescreen has been left unchanged. Because of the much increase real estate available on screen, you can now have five shortcuts on screen as opposed to four on Galaxy S II. Similarly the app drawer now has a 5x5 grid, an update from the 4x4. These two have been the biggest visual changes from previous Samsung TouchWiz 4.0 phones and they're quite welcome too. Back when we reviewed HTC Flyer we complained about HTCs failure to make use of the high resolution screen so it's certainly nice to see Samsung not repeating the same mistake.

One area which would have made Galaxy Note certainly a lot more appealing is the presence of a split keyboard under landscape mode. I've never been a fan of these keyboards on such large smartphones and with a 5.3" screen it's almost mandatory to have it by default.

The rest of the UI is the usual affair. You have your run of the mill phonebook which can sync with Google and various social networks. Telephony is covered pretty well with the call volume being loud and clean. Unfortunately if you were hoping for improved speakerphone performance coming from a S II, then prepare to be disappointed. It's not worse than a S II, but with the increased size I was expecting a speakerphone that can output something other than just high frequencies. The web browser is certainly one of the best, if not the best ones around. It handles pretty much all webpages perfectly fine and is extremely fluent. It's far, far better than the ones found on HTC phones and I must give a lot of credit to Samsung for this. Web browsing is simply superb on Galaxy Note.

Watching videos on this beautiful screen is a treat. Of course this wouldn't be possible without a great video player and Samsung has not disappointed here. The default video player can play all popular formats such as .avi .mkv and a variety of codecs such as  .h264 or xvid. In addition to this there is great subtitle support too with the ability to change size and adjust sync.

Audio quality via headphones was one of Galaxy S II's biggest disappointments. I'm glad to report none of that has passed onto Galaxy Note. While still behind the likes of iPhone 4, it fares a heck of a lot better than S II and is enough to replace your PMP. Galaxy Note also has a built in FM radio.

Apart from its physical dimensions, the included stylus or as Samsung would like you calling, S-Pen, is the only differentiating factor between Galaxy Note and the rest of Samsung's line up. We first saw a stylus like this on HTC Flyer however unlike that one, this is more conservative and straight forward with just a single button.

There're a few places where this pen can be used. For example just hold the key and place the pen over any screen to take a screen shot. This will automatically open up an image editor where you can edit your pic and then send it or save it. The editor offers plenty of options so it should keep you rather busy.

Other than the screen shot functionality, you can also double tap the pen on screen to open up the S-memo. S-memo is only a very basic looking app to take notes. Naturally you can use the pen to write or draw on it, which it happens to pull off rather accurately. The S-Pen can also be used to swipe across screens. It's pertinent to mention that whilst drawing with the S-Pen there's a slight 'lag' between when you draw something and when it actually appears on screen. It can be quite irritating initially but eventually you get used to it.

That's just about it as far as the new S-Pen goes. Samsung has released a new SDK which allows developers to make full use out of this stylus. So far I've yet to come across anything that would merit the purchase of this device solely on its S-Pen functionality but I'm hoping that might change in the future.

Galaxy Note has the same 8MP camera that Samsung has used in Galaxy S2 which means you can expect excellent results under proper sunlight. It's one of the best cellphone cameras out there bettered only by the iPhone 4S.

It's easy to dismiss Galaxy Note as an oversized Galaxy SII and for the most part you'd be well within your rights to do that. Functionality wise it does not offer anything concrete over it and the novelty of a stylus wears off rather quickly. However there is definitely a market, albeit a niche, for those who find the screen on Galaxy S II rather small yet find a tablet far too big to carry.

Samsung has done an excellent job in that regards with the Galaxy Note. It carries over from the Galaxy S II and retains all of its advantages, namely excellent screen and performance while maintaining appreciable dimensions. The included S-Pen is a bonus and though in its current form it doesn't offer much, the possibilities are vast.