Sakura Wars Review – A Lover, Not a Fighter

While largely an unknown entity in North America and Europe, from the late 90s to the early 2000s, the Sakura Wars series was nearly as popular as franchises like Final Fantasy or Dragon Quest in Japan. Despite that, the series never left its homeland during its prime, with only one game, 2010’s Sakura Wars: So Long, My Love, being localized well after the series had sputtered out creatively. For years it seemed Sakura Wars would never get a fair shake in the West, although a new glimmer of hope has emerged.

After over a decade of dormancy, Sega finally revived the Sakura Wars series last year, and this time around the game is getting a Western release only months (not years, as in the past) after its Japanese launch. It seems like Sega is finally serious about turning Sakura Wars into a global franchise, but is this latest game in the series ready to conquer an all-new audience? Or has it been routed by bad decisions? Power up your mechs, it’s time to put this one to the test… 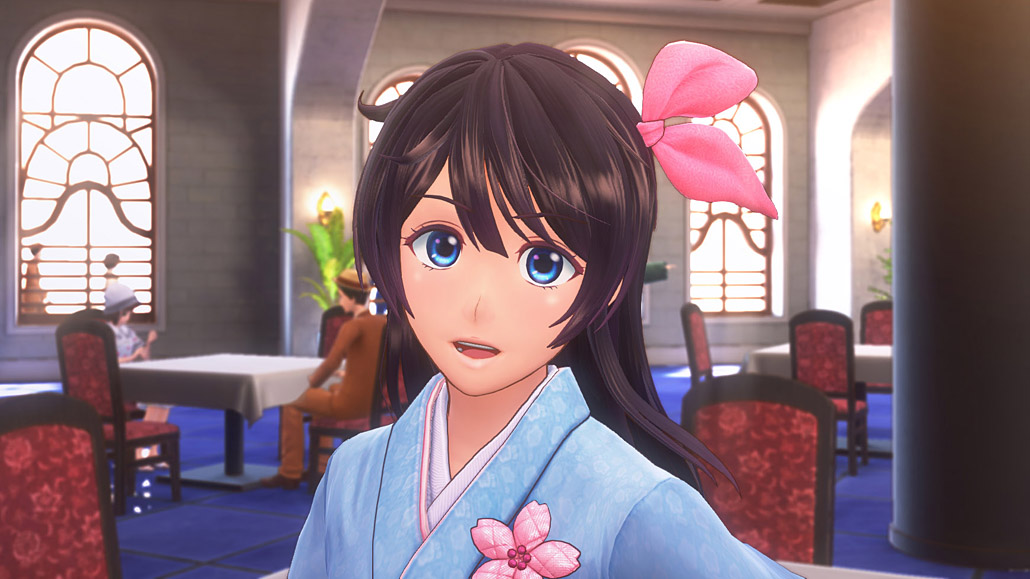 For those unfamiliar, the basic premise of Sakura Wars is…unique, to say the least. Earlier Sakura Wars games took place during the 1920s in a steampunk version of Japan, while this latest game dials the timeline ahead to 1940. That said, little effort is made to stay true to the “historical” setting in any way – this latest entry has characters using steam-powered smartphones. Just roll with it. The world has been at war with demons on and off for decades now, with major cities being defended by “Combat Revues,” which fend off monsters with steam-powered mecha, while also putting on performances to bolster public morale.

Despite being billed as a soft reboot, the new Sakura Wars is actually a sequel. As mentioned, we pick up a decade after the events of the original games and find the Tokyo-based Imperial Combat Review’s Flower Division in a sad state. The current team is untested, their Koubu mecha are out of date, and most serious of all, the plays they put on are a laughingstock. You play as ex-naval captain Seijuro Kamiyama, who is randomly assigned to whip the Flower Division into shape. Over the course of the new Sakura Wars, it’s up to you to beat back a resurgent demon threat, save the faltering Imperial Theater, and endure many awkward flirty conversations. 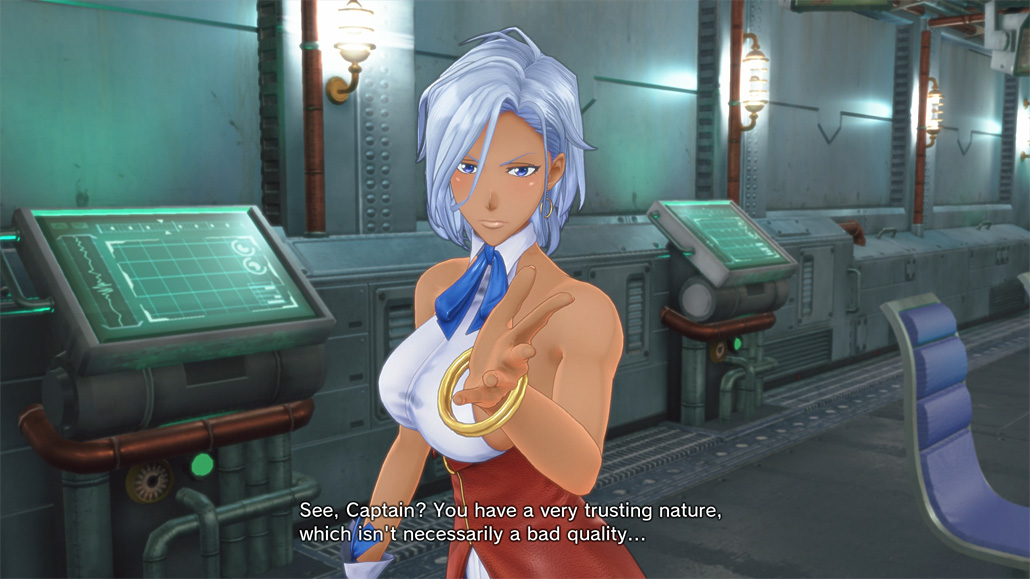 If the above description has you scratching your head, well, I don’t blame you. The premise doesn’t hold up to any serious scrutiny. Why are a group of young women with seemingly no real combat training the first line of defense against the demons? Why is the Imperial Theater in danger of going out of business when they can afford to buy mechs and airships? In addition to the gaping logic holes, the game can feel a touch uncomfortable at times – Seijuro constantly hitting on his female underlings would make modern HR heads explode, and there’s some pretty eyebrow-raising historical revisionism going on here considering what Japan was actually up to in the 1940s. Sakura Wars is a game you really need to be in the right mindset to appreciate, and understandably, some people just won’t be able to get there. But hey, if you can get in the right mood, the game can be quite charming. 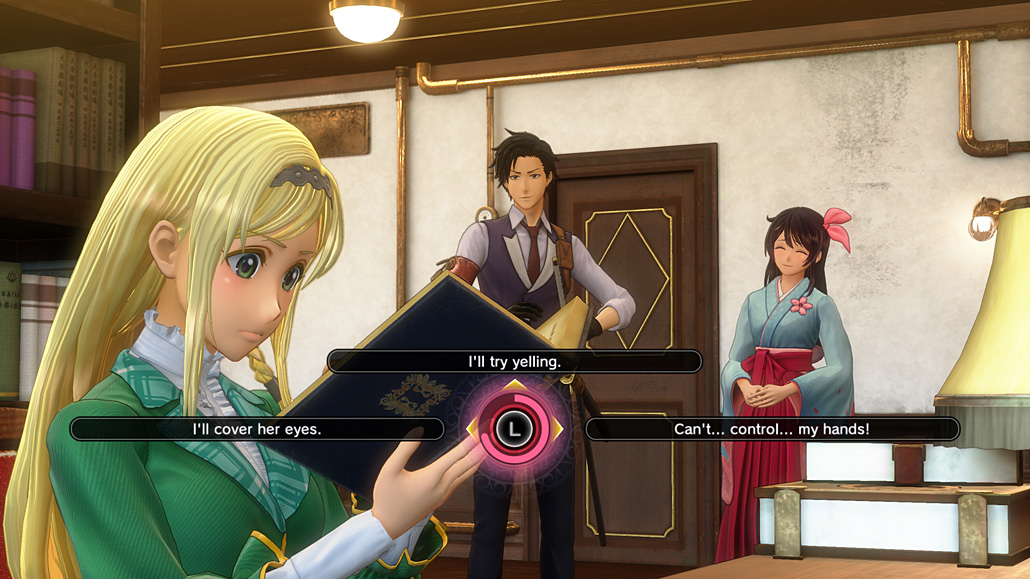 The core of Sakura Wars is building your relationships with your Flower Division partners, with one of them eventually blooming into full romance (thankfully, the very-young-looking Azami is the exception – you’re more of a brother/mentor to her). Your teammates include the titular Sakura, who’s known Seijuro from childhood and wants to follow in the footsteps of Sakura Shinguji from the original SW games, the impetuous Hatsuho, who’s torn between the Flower Division and taking over her family’s shrine, the shy Claris, who dreams of being a writer, the sophisticated Anastasia, who’s already made her fame and fortune as an actress, and Azami, who aims to be a master ninja. While they all embody anime tropes to some degree, your teammates are consistently well-written and eventually start to feel like real, living characters. I guarantee you’ll have your favorites by the end of the game. Oh, and don’t worry, this isn’t one of those dating sims. While some of the character designs by Bleach creator Tite Kubo lack subtlety, and Sega is selling swimsuit DLC and other bits of fan service, the writing never gets too horny or embarrassing. No judgment if you do like the spicier dating sims, but Sakura Wars is more about personality. No need to close the curtains to play. 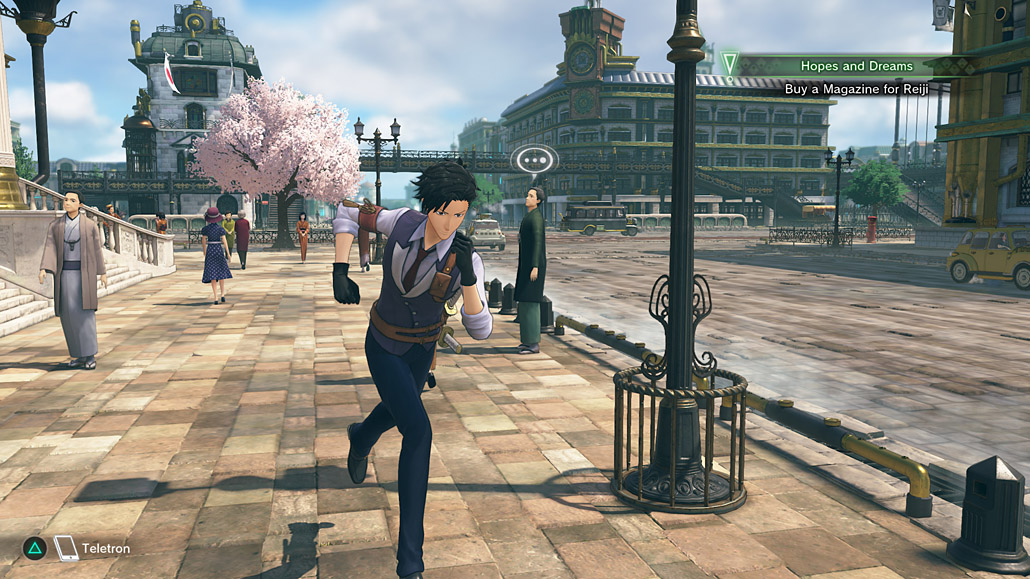 How does all this relationship-building actually work? Most of Sakura Wars plays out as a light visual novel, with characters frequently asking you questions, which you have to answer within a set time limit. If the person you’re chatting with likes the response you chose, you’ll hear a little chime, which means you’ve increased your trust with them (you’ll get addicted to hearing that chime). If you boost your trust with your teammates enough, you can have a heart-to-heart chat with them, during which you enter “Communication Mode” where you can highlight spots in the room, or on girl’s clothes/body, in order to spark conversation. These little chats can feel surprisingly true-to-life at times, although beware, some moments will make you squirm.

In terms of actual plot, Sakura Wars is split into chapters similar to an anime TV series or OVA. There is an overarching plot about defeating the demons (which may be led by a familiar face from the past) and saving the Flower Division by winning the Combat Revue World Games, but most chapters have their own standalone stories as well. You may have to help Claris write a play, take Sakura back to visit your hometown or free Azami from government agents. The game does a good job of keeping its objectives varied – in addition to your standard “go to X and talk to Y” objectives, you’ll find yourself doing a bit of light detective work and promoting the Imperial Theater in an elephant costume, amongst other things. Sakura Wars’ story and characters are brought to life with sharp, detailed visuals and a decent number of well-done anime cutscenes. The game’s soundtrack, which is largely based on music from past Sakura Wars games, is appropriately peppy, and the Japanese voice acting isn’t overly shrill. 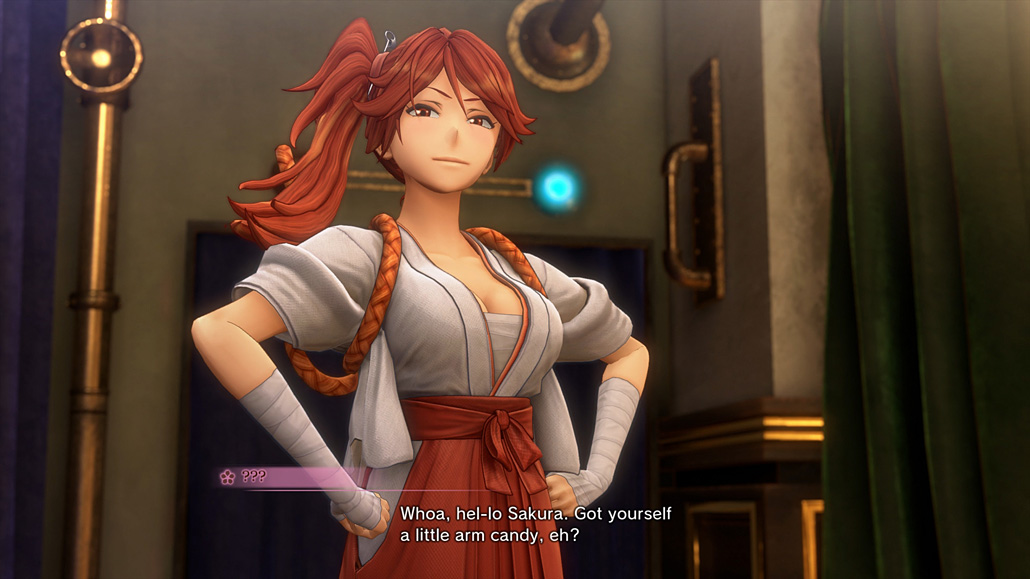 Sakura Wars’ story can sometimes feel a bit like a Saturday morning cartoon, with some rather obvious plot holes popping up, but the game’s latter chapters serve up some solid twists (including one that should get hardcore fans talking) without losing sight of its character-driven drama. I actually found myself a bit choked up during some scenes, which I was not expecting. If Sakura Wars was just a straight-ahead romantic visual novel, I’d recommend it whole-heartedly, but there’s also another side to the game.

Past Sakura Wars titles combined visual novel storytelling with a hybrid of real-time and turn-based strategy, somewhat similar to the system in Sega’s Valkyria Chronicles games. This latest Sakura Wars tosses the strategy-RPG stuff out (there’s no RPG elements at all really) replacing it with Dynasty-Warriors-style hack ‘n’ slash action. Each character has regular and strong attacks, which can be combined in various ways for simple combos, a special attack that can be unleashed when you collect enough spirit power from fallen enemies, and an extra-powerful team attack you can usually only do once per battle. Offense is mostly the name of game here, but there’s also a dodge mechanic that will slow down enemies if you duck out of the way at just the right time. 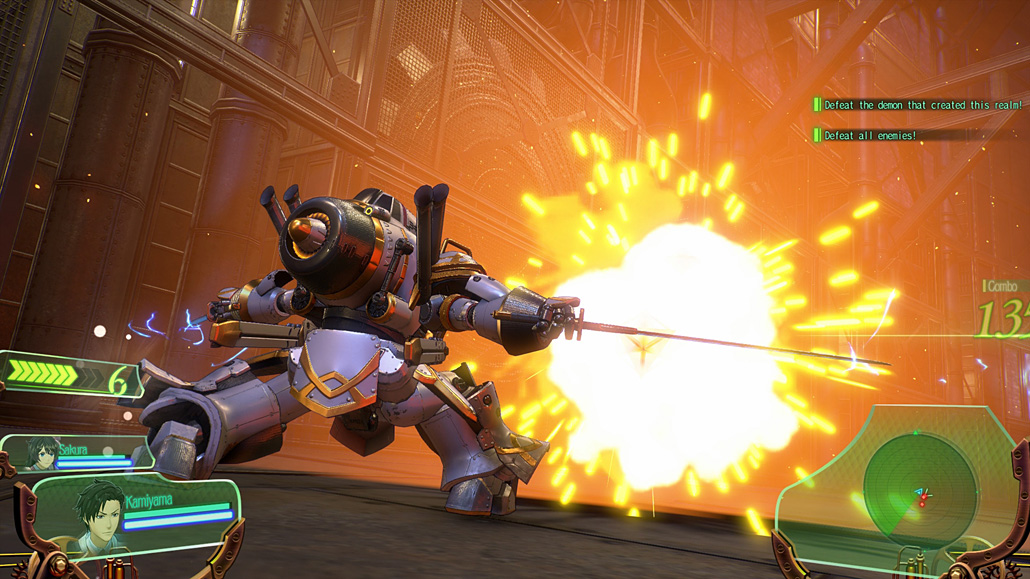 And that’s about all there is to say Sakura Wars’ action – it’s a bit shallow, suffers from occasional performance issues, and level design is repetitive and littered with annoying superfluous platforming sections. Admittedly, the action does liven up during battles with bosses and other Combat Revues, but some of these showdowns are repeated multiple times. The combination of visual novel and strategy-RPG gameplay from the older Sakura Wars games just felt like a more natural fit. In this new game, the story and action are largely at odds, with your choices made during the visual novel sections only having a very minor effect on battles. 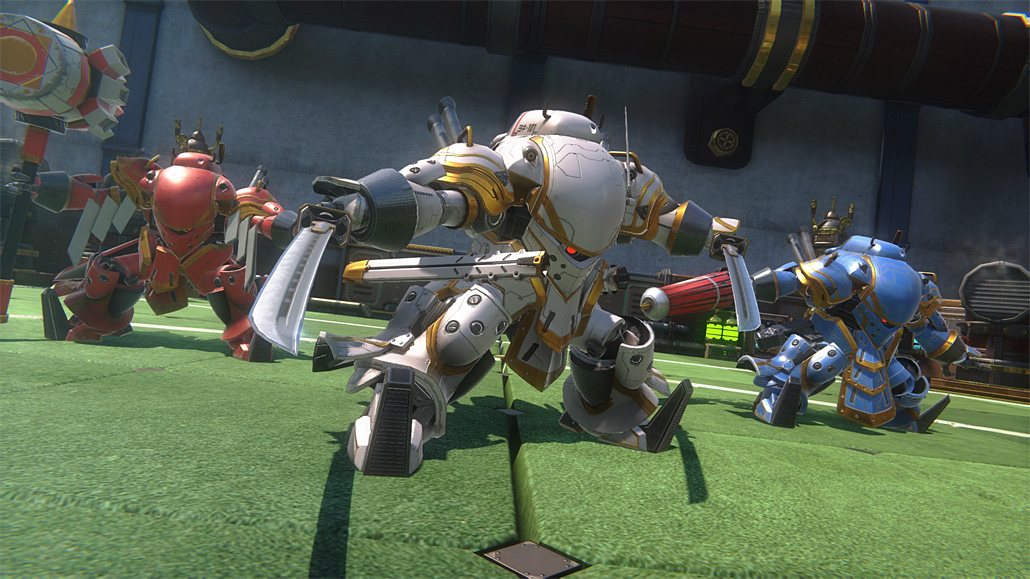 So yes, Sakura Wars’ action is a bit of a letdown, but I wouldn’t exactly call it bad. There’s also not that much of it – expect about half-an-hour of combat for every two hours (or more) of story. That is, until near the end of the game. In a classic example of Sega missing the damn point, they load up the game’s final couple chapters with more combat than usual, including a very drawn-out final boss. That said, Sakura Wars’ strong story pulled me through and I didn’t feel like the so-so action dragged down the overall experience all that badly. It helps that Sakura Wars doesn’t overstay its welcome. At 15 to 20 hours, the game is about exactly as long as it needs to be, and, of course, those who want to explore all the romance options can sign up for multiple calls of duty.

This review was based on a PS4 copy of Sakura Wars provided by publisher Sega.

Sakura Wars isn’t for everyone, but fans of quirky Japanese imports or those simply looking for something a bit outside their comfort zone ought to give it a shot. The game’s action is run-of-the-mill, but its heartfelt character-driven story and polished anime-infused presentation largely make up for that. Sakura Wars may not win every battle, but it stands tall in the end.