Red Solstice 2 is an interesting game. When you look at all the components, you'd understandably picture it as being a real-time XCOM, with the quality and features that come to mind with such a description. Playing the game, a lot of what you would expect is there. However, the few downfalls found in games like XCOM seem to have been expanded, while the aspects that made the game shine haven't been recreated for the real-time tactics approach offered by Red Solstice 2.

But what is Red Solstice 2? Following the events of Red Solstice, the alien (STROL) threat has run rampant. No longer is it just the capital of Tharsis under threat; the whole planet is. This brings in the XCOM similarities. You have a mobile base that can move from region to region, acting as your point of return after each mission, letting you scan the region for new objectives, missions, and more.

What seems to be the problem with Red Solstice 2 is that it can't live up to the standards it sets in the very first mission. This is a fight through a STROL infested facility, finding out three other soldiers and eventually using the Ion Cannon to wipe out the current threat in the area, or whatever they call it in this game. Missions like these are reminiscent of earlier Red Solstice missions and the directed missions you would find in a game like XCOM. A directed approach, designed by the developers, always has that step above the randomly generated missions.

This is where the game starts to fall apart a little bit. The custom missions are far too frequent. You need to avoid the infestation level increasing, lower the infestation level, get resources, get more manpower to create new items, or permanently use them to update your roaming base. Now, it's not that they're too frequent in terms of what you need them for - you need to do them for the aforementioned reasons. They're too frequent because of what the missions consist of.

Far too many missions take place in what seems like a handful of oh-so-similar maps. These are often cities with buildings in a grid formation, often a few alien hives, and the missions are randomly popped down with little care due to the randomised nature. Surrounding terrain may be different and look good, but it does little to mask the issues. The number of times I've had to escort a VIP to the crossroads of some innocuous buildings that wouldn't even draw attention if they were the only buildings left standing after a nuclear weapon is perplexing. Or finding some supplies dropped in what seems like the most illogical place. All too often do you find yourself doing the same things, over and over again, all over Mars.

I know the randomised side-missions of XCOM - and similar titles - can be samey, but this takes it a bit too far. All too often, you find yourself on what may as well be a copy-pasted map (if it isn't), with random hives, resource dumps, civilians, and more just popping up. You do these side elements and the randomly-located main objective in this side-mission, and happy days. Only after about ten of them, it feels like you've done a hundred.

It's a shame because the core missions are genuinely engaging. The structure allows challenge to ramp up in an organic way, rather than side missions just being wave-based, and when you hit the final wave, a repeated onslaught of aliens until either you die or decide to complete the mission. This can be gamed to a large degree too. Stock up on ammo, find a good place to hold up with limited access, watch as the experience racks up, and when you finish the mission and get the extra experience, suddenly you're a bit overpowered.

To an extent anyway. You have a lot more to unlock than your AI-controlled squadmates, who don't seem to be able to level up as much. These are used if you don't happen to be playing online with other humans and are... boring. The characters you meet in story missions, and even some side missions, are all voiced and have some personality. These are completely lacking personalities and surnames. The earlier issues mentioned with the missions also means that the possible emergent storytelling ends up being lost in the generic nature of Red Solstice 2.

It also doesn't help that your AI characters seem to be immortal. A few times, I've had the AI bug out on me; a character goes wandering or decides to take the wrong path, gets stuck in a corner and then just gets swarmed and killed. Or at least I thought they were killed because I'd then finish the mission, and suddenly they're back with the squad. Last I checked, they were swarmed by a hundred mutated monstrosities - I certainly didn't have the force or equipment to get them out alive.

Still, I shouldn't complain. At least those surviving meant I didn't have to get a new character that I'd have to level from the beginning again. Another completely replaceable and uninteresting suit of armour for me to direct in a fight. That is when the orders you can give them are listened to or even work if another of the bugs decide they wouldn't show up at the moment. The bug is that I would open the radial menu to order one of my team to stand at a particular location, behind some cover. Only they decided not to go there. Actually, the radial menu decided not to recognise my clicks at all.

Still, despite the bugs, the general action is enjoyable enough. It can be played like a twin-stick shooter, but the reality is that you'll be clicking to move your character with overwatch permanently turned on. That way, your character will pick off the nearest enemy and move on to the next one. If you swap to your secondary weapon, you have to aim and fire it yourself, but you'll mostly stick to your primary, so you can then use the special moves you have, such as lobbing a grenade or using the items you've picked up or brought with you.

This is one of the better aspects of the game. There is a range of weapons and items to load your character, and squad, with. These can work well with the other customisation features, including changing the colour of your characters' armour. I made my medic character blue, game him more armour and health, though kept his weaponry a little on the basic side. So the customisation is here to a decent extent, though you have far more options with your own character than the AI squad.

If there's any other real way that Red Solstice stands out, beyond the sheer force of the alien infestation and waves you fight, which can be surprisingly exciting, it's the enemies. There are far more than most games of its type, offering a huge range and variety. The detail is surprising, with a lot of work and thought clearly having gone into it. It's also good how the aliens will interact with the environment, bursting through windows if they can do so. This use of the environment can work in your favour, such as using a bomb to blow a hole in a wall, making an escape route in an infested building.

The only other thing would be developing your roaming base and settlements, and even though this is somewhat enjoyable, it lacks that sense of ownership. You don't truly feel like you're developing much or that it's something tangible. It's a shame because if implemented a little better, it's perfect for the narrative and world of Red Solstice 2.

I could say more about Red Solstice 2, but honestly, I'd be retreating ground I've already covered. Much like the game likes to do. This is the overall issue I have with the game, repetition. Even with varying enemies, all too often, it feels like you were doing the same thing over and over again, to farm resources and hold off the infestation while praying for the next story mission to come along. I've enjoyed my time with Red Solstice 2 in spurts, and that's about the best way to play the game. 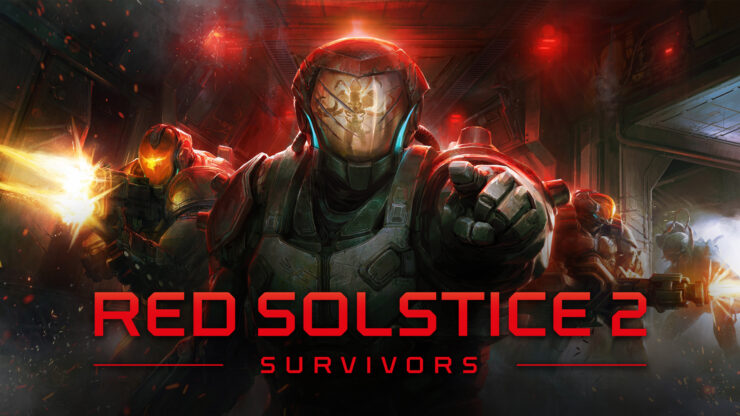 Red Solstice 2: Survivors is, at best, a slightly above-average game. For every fun aspect, such as the genuinely fun action-packed nature of the run-and-gun gameplay, there are downsides such as incredibly repetitive missions outside of the core campaign. However, you then find an excellent range of creatures and a good amount of character customisation, really boosting the game, for it to then be let down by the base and region-building feeling tacked on, and then the game is impacted by a fair few bugs. If you liked the first Red Solstice, and other similar shooters, you'll enjoy this, though arguably in shorter sessions or with other people online.