Red Magic 5S is an absolute beast of a phone. It features a 144Hz AMOLED display, no-compromise flagship CPU and GPU performance with active cooling, up to 55W fast charging, a feature set targeted towards gamers, and much more, for a price starting from just $579. Read our review to find out if delivers the complete package or is it only good enough for gaming. 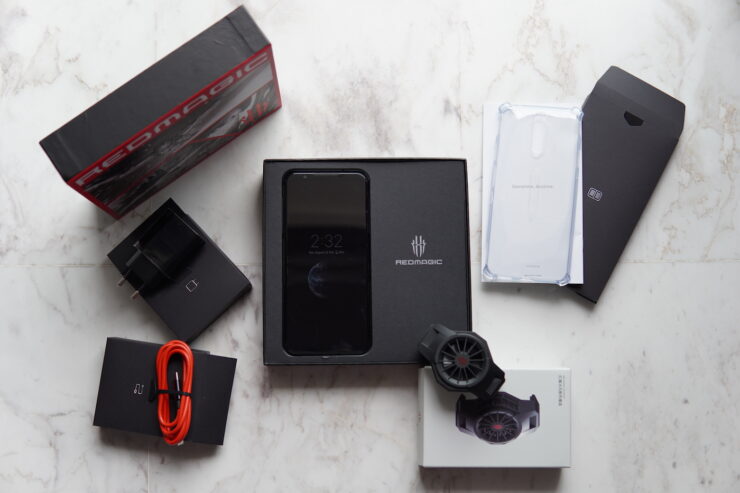 For a smartphone starting at $579, the RedMagic 5S ships with a number of accessories out of the box. Along with the phone, we received the following contents in the box:

We also got the Ice Dock with our review unit, which is sold separately. The Ice Dock attachment can cool the phone further during intense gameplay sessions. 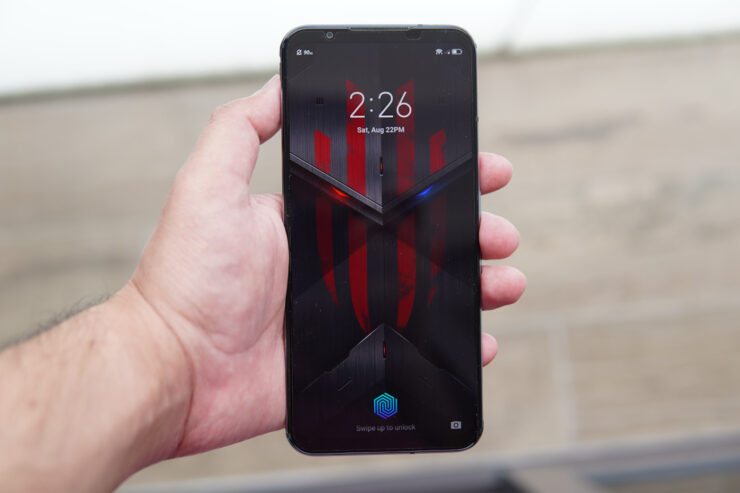 The design of the phone makes it obvious that it's targeted towards gamers and eSports. The 6.65-inch AMOLED display takes center stage with thin bezels around. The chin and top part of the display are the same size which is nice. There is no punch-hole camera, or a notch here - the camera and sensors are housed in the top part of the display. Authentication is done via an under-display fingerprint sensor. 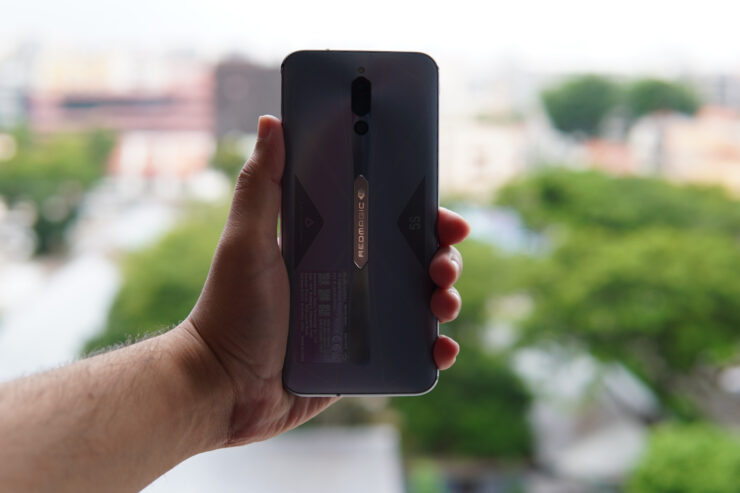 The body is metallic which means that there is no wireless charging. The phone also lacks any sort of waterproofing, but let's be honest - these features are not why you would buy this phone. There is one light on the back of the phone which turns on when you unlock the phone. It can be set to either a breathing effect or just a steady glow.

The phone has air vents on either side to allow for cooling, which is supported by a fan inside the device. The right side of the device has the power button, volume rocker, and shoulder buttons, while the left side has a Game Boost button which enables some interesting gaming-specific features. A connector is also located on the left side which allows accessories like the Ice Dock to connect.

There is also a headphone jack on the top of the phone, however, the phone does not ship with headphones.

The design is not the most ergonomic and it makes sense why. It's a large phone because it features cooling mechanisms, a large display and a massive battery. I'm certain mobile gamers would not mind the size of the device as the larger the display, the better. However, in regular usage in portrait orientation, the phone will definitely feel heavier than most.

To test performance in terms of numbers, I ran a few standard benchmarks first. In all of these tests, the performance of the 865 was second to none. In Geekbench 5, the phone scored the following:

When testing using 3DMark's Sling Shot, the phone scored numbers which were apparently better than 99% of the smartphones out there. This is not something I can possibly verify, but considering the gaming performance, I had little reason to doubt it.

As Fortnite is not available on Android anymore, I had the following games available for testing:

When playing Real Racing 3, with all the assets completely downloaded and refresh rate set to 144Hz, I was able to achieve smooth frame rates without any hiccups. Even though Real Racing 3 supports 144Hz refresh rate, the game's graphics somehow did not look too demanding on Red Magic 5S' beautiful large AMOLED display. The game also does not support any custom graphics settings so I found it best to move on to the next game.

I downloaded and installed PUBG and cranked up all the settings to the maximum:

While PUBG is not graphically as demanding as Fortnite, it performed flawlessly at 144Hz refresh rate. I even enabled shoulder buttons, 4D shock, and Game Boost mode and somehow the game did not push the device enough for the fan to become loud. It definitely helped me get the 12 kills in the game.

Call of Duty Mobile was a similar story. Playing Nuketown map on full graphical settings with a high refresh rate brought back memories of the first time I played Call of Duty on Xbox. Out of all the games I played, COD Mobile felt closest to console-quality and resulted in tons of fun. I was able to get 20+ kills a few times in team deathmatches. As someone who does not play FPS on mobile, I'm certain the specifications of this phone had something to do with that.

Somehow, Game Space did not detect Call of Duty Mobile for me, but it was easy to add it to the list.

When you press the Game Boost button, the Game Space software takes center stage. It links to the games installed on the device and lets you access and manage features during the game such as screen recording, fan settings, do not disturb, macros, display refresh rate, controllers, and much more. It even shows various stats like CPU/GPU clock speeds and network speed.

The software, easily accessible via its hardware button, is perhaps one of the best features of the phone. If it was not for its quick access, many of these features might not be used as often during quick mobile gaming sessions.

Even though the phone has 3 cameras, the performance was average in my experience. The 3 cameras include wide, ultra-wide, and macro. Although the camera app is full-featured, and even supports 64MP capture and 4K video recording but in my testing, the results were not up to the mark.

In daylight, you can definitely get decent results. The shallow depth of field in the main camera lets you take good photos. The camera app also has a slew of 'pro' controls that let you adjust everything from ISO to focus. However, when you try to use the ultra-wide lens or the macro camera, the results are not as good. It would have been nice to have a telephoto lens instead of a macro lens though.

The battery has a capacity of 4500mAh and it lasts a long time unless you are gaming. During normal usage including email, social media, and file sharing, I was able to get 1.5 days without recharging. When I had to recharge, I was able to use a fast USB-C Power Delivery charger to get it back to 100% battery in 45 minutes. The phone charges at 55W and fills up to 100% in just 40 minutes which is faster than any other device I've used with such a big battery.

If you are a gamer, or a professional into eSports on mobile, you cannot go wrong with the Red Magic 5S. It ticks all right boxes for mobile gaming. Even if gaming is not your primary function on mobile, the phone packs enough performance and features that it runs without a hiccup multitasks flawlessly and its battery lasts a long time.