Razer is a company who have a very strong company vision and brand identity. In our conversations with them in the past it has been clear that they know what makes a good product, are willing to experiment with new ideas, and bin them if they don't work or make sense and they have no problem taking extra time to develop new peripherals if it means the end result is better.

On our test bench, we had three new products from Razer that are all based on a license with Blizzard to tie them in with StarCraft 2. The Spectre mouse and Banshee headset had been reviewed earlier and were meant best for those who are fans of the StarCraft series themselves. They had been designed keeping in mind the gameplay and theme of StarCraft 2. Today we’d be reviewing their Razer Marauder keyboard for StarCraft 2.

The Razer Marauder comes in a matte finish box packaging with a transparent cover on the sides exposing a little of what a beast is hiding inside.

The back of the box shows the highlighted key features of the keyboard, in 15 different languages.

Inside the box, however, is the Razer Marauder itself, a few manuals and 2 stickers from Razer.

The overall keyboard design is has been optimized for key travel and spacing, you won’t accidentally press a wrong key when you’re nailing down enemies in the war zone.

As far as ergonomics is concerned, the merging of the keypad with the directional buttons and other keys is an added advantage as it does affect your response time quite a lot by a margin over standard full size keyboards.

Underneath at each of it's side, there are strips of compressed foam that are for the base of the Keyboard.

The keys on the Marauder are much softer to press compared to my old Dell branded keyboard (Came in 1/8th the price of the Marauder), hence are less noise making and have quite a tactile response. The Razer Marauder is a compact design that’s intended to be easily carried to tournaments.

The keys have, according to Razer, optimized spacing and are Laser-etched. Also featuring the Razer Hyperesponse technology and upto a 1000Hz.1ms response, this will be, by far, one of your enemy’s worst nightmares.

As far as connectivity of the Marauder keyboard is concerned, there are two Gold-Plated USB Cables, one for the keyboard’s power, the other for the lighting. The cord is braided as well as an anti-tangle cord. Length wise, the braided cable is 7 feet long.

Macros and key mapping on the Marauder can be controlled and configured from the Razer StarCraft II Configurator (Available for Download from Razer’s site).

Like the Spectre mouse and the Banshee Stereo Headset, the Marauder also has a trick up asits sleeves. The Marauder features an active lighting system that provides feedback on how rapidly you’re issuing commands to your forces, based on the number of actions per minute (APM) that you are performing in the StarCraft 2 game. The lighting colors are all completely customizable to any choice of yours! 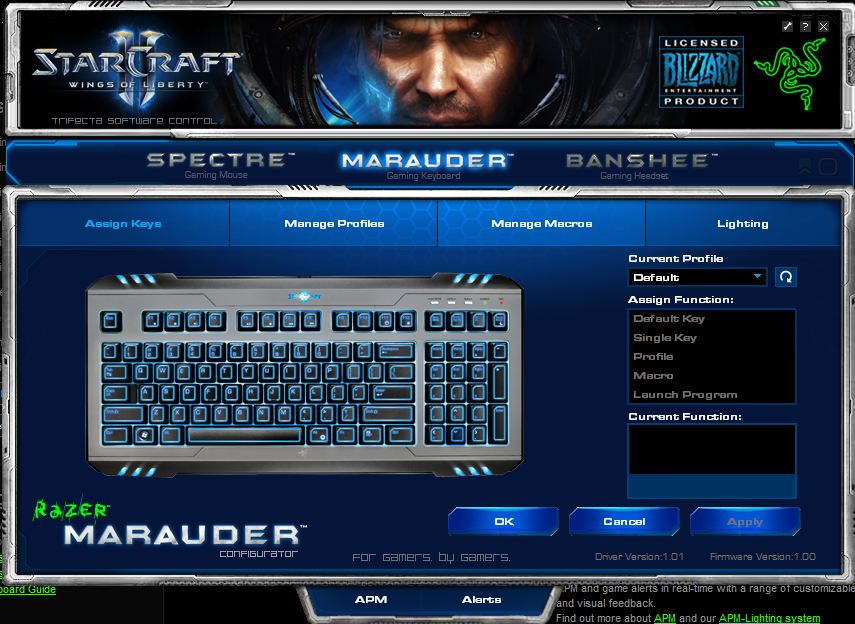 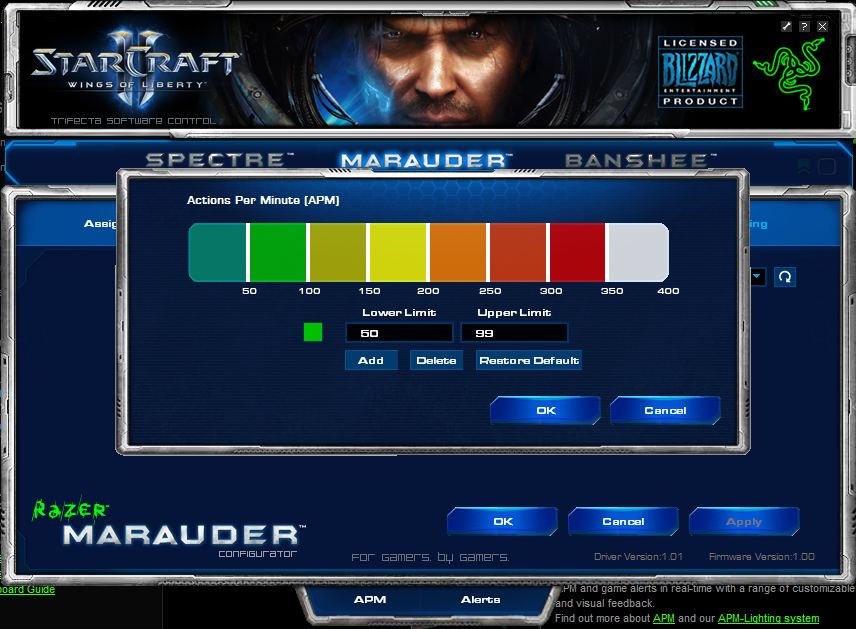 Also, there’s an Fn key added in the keyboard that allows you to record macros on the fly, change to gaming mode (Disable Windows Commands) andup to different profiles without any hassle or need of getting out of the game!

When Fn Key + Alt is pressed, Macro recording is activated and a Rec light turns red. When done with the macro, just press the Fn Key +Alt again and you're done! All profiles and macros can be managed from the StarCraft II Configurator.

I’ve had this now on my desktop for a week now and I must say, when they mean placing keys for more accuracy, they really meant it. As far as games are concerned, I checked it in Call Of Duty: Black OPS, Counter Strike: 1.6, Need For Speed : Hot Pursuit, and Team Fortress 2, this had made my game play ever so relaxing.

In almost every game, especially StarCraft II, the APM lighting came quite a lot in handy. From building up economies, to multiple fights to base attacks, the Marauder always alerted me ahead so that I kept pretty much ahead in the game. The macros with the time delay option does come quite ever so handy I must say!
As for other tasks such as web browsing, word processing and productivity, the Marauder lacked in this region if you’re asking me. I found it quite hard to cope with the integrated keypad with the directional and Home/End/Page Up/Page Down/Insert/Delete keys. Since every time I had to enter some digits, I had to press Num Lock and then if I had made a mistake and had to erase it, I had to Turn off Num Lock in order to use the Delete key. This might not look much of a hassle but if you’re an accountant + gamer, this would be a disadvantage for you.

On the other hand, the lights on the Marauder are completely customizable For instance, the key lighting, the side cuts and the under glow’s colors could be chosen and changed individually through the Razer software.

As for the conclusion, this is a keyboard targeted at the tournament players or LAN parties as you may refer to them. And considering that, this does the job quite too well for you if you're a StarCraft II fan. The APM lighting definitely helps improve your concentration and focus towards the game as well as the ultra fast feedback of these Hyperesponse buttons. For those MMORPG players, this is a very special treat for them if they want to be the best of the best in the field. But considering the price of 120$, this is as one would say a bit high. I would recommend the SteelSeries SHIFT keyboard over this quite frankly as that retails for 90$ and is a better buy if you want to both be a gamer and keep up with your office work.