Sound quality is one aspect of PC gaming that has never really gotten its due. With sound card sales dwindling and    an alarming lack of good quality gaming headsets available, you'd think we're finally entering into an era where people are finally becoming accustomed to mediocre audio from their top end gaming PCs. Fortunately Razer is one of the very few companies right now trying to somehow check this downward spiral.

Today we'll be reviewing their newest USB gaming headset which is part of their 'licensed gaming products'. Dubbed Star Wars Old Republic Gaming Headphones, it goes without saying who these are targeted at. 129$ is a lot for a headset that has flashy lights on it; let's see if its matched by substance or not.

If you're familiar with Razer (chances are you are if you're reading this) then you know being flashy is part of the package and Razer doesn't hold back one bit with this headset. They come in a large box with splashes of game art and a transparent window to get a sneak peek at the headset. The back of the box features numerous highlights, chief amongst being the Dolby 7.1 virtual surround sound. Inside the box you get your usual manuals and guides, razer stickers and replacement faction logos for the ear cups.

Looking at the headsets for the first time you realize how large they are compared to your run of the mill on-ear headsets. Razer chose a greyish white color scheme for the plastic bits and black for the foam and padding. The combination, though nothing out of the ordinary, does look quite striking. The earcups are shaped hexagonally and have ample padding on them. Despite the odd shape they sit perfectly over the ears. The extendable headband has ample padding too although I would have preferred it to be a bit more flexible. Straight out of the box I found these headsets to be quite tight simply because of the amount of pressure they exert on the ears. You might think this tight fit helps with noise isolation, well I'm afraid it doesn't. Razer has just not designed these to be noise canceling so if ambience noise is an issue in your room, you might want to look at something else. You also get mic and volume buttons on the ear cups for convenient adjustment.

Of course being a gaming headset it's imperative Razer uses a top quality mic for voice communication. We'll talk about the quality later on but as far as physical implementation goes, they've done a commendable job. Naturally it can be swiveled up and down. There's ample flex in case you want it closer to your mouth, you know just in case you want to get your point across. 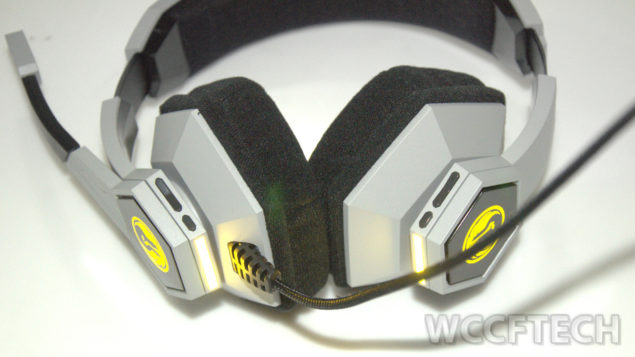 So what has Razer done to make these headsets stand out from the crowd? Lights of course! Both ear cups have faction logos that light up when you power on the headsets. These logs are interchangeable depending on where your loyalty lies. You can adjust the light color through the included software. While you never actually get to see these lights when you're wearing the headsets, they do look quite nice from a distance. I'm not a fan of such gimmicks but credit where credit is due; Razer manages to make something cheesy look nice. 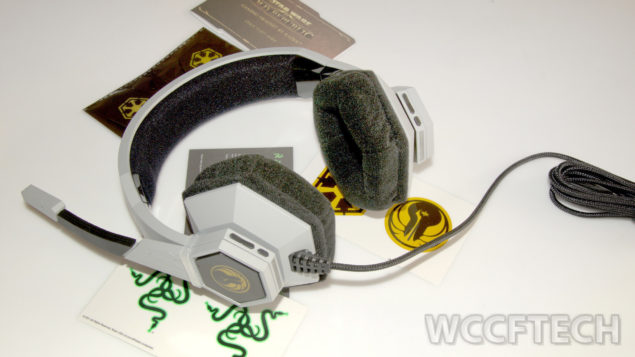 The USB port is gold plated and is supported by 1.5m of braided cable. The cable is very thick and very rigid. Even right out of the box it was tangled and eventually it will get worse. The plus side to this is that it makes the cable very strong as well.

Of course Razer can add as many lighting effects they want but this is in the end a headset, and without decent sound quality it will not merit a purchase. Let's look at the specs provided by Razer:

First things first, if you're planning on using this headset on a Macintosh computer, you're out of luck. It might work as a generic USB sound device but Razer doesn't list Mac as a supported OS.

Back to performance. Razer headsets have been a hit or miss affair in the past so I wasn't sure what to expect from this. A quick glance at the specs show a 50mm driver. Now driver size isn't everything, but keeping everything else constant, a bigger driver is able to produce deeper lows and wider sound stage. Majority of gaming headsets use 40mm drivers so it's certainly nice to see Razer opting for bigger ones.

Since these are primarily gaming headsets so I'll be testing it on games first. I chose Team Fortress 2 and COD: Black Ops as my preferred titles. Unfortunately I do not have Star Wars Old Republic in my games library but Razer didn't design these headsets for one specific game. After a quick gameplay session on both games I was quite pleased with the over all sound quality of the headsets. The 50mm drivers certainly have an advantage here with big explosions and overall sound stage. These aren't the 'best' headsets I've ever used per se but they're still very impressive. One of the big marketing push behind these headsets is the inclusion of Dolby 7.1 virtual surround. Unfortunately with all virtual surround sound gimmicks, this one doesn't fare well either. The result is a very 'cold and distant' aural experience. I didn't feel any advantage in positional audio with surround on than surround off. The 50mm drivers do a good job of it in stereo mode so I didn't really find much use of it. Mic performance was adequate.

Of course a lot of people watch movies and listen to songs on their PCs so it's imperative that these perform just as well here. I chose Lord of the Rings: Return of the King as my movie of choice. The scene with the Battle of Minas Tirith is sure to bring even the most demanding sound systems to their knees. For a gaming headset that isn't targeted at movie buffs, these do a rather pleasing job and will get you around without too many problems. For dedicated movie watching? You're better off investing in something from Audio Technica or Sennheiser.

I'd say the same for songs too. While these do a good enough job, for a proper experience you're seriously better off getting something else. Gaming is Razer's forte and that is what they're sticking with.

These are USB powered headsets which means it comes with its own sound card. Naturally that requires separate drivers and software. The included software package from Razer is quite decent and covers all major features. The included Synapse memory means you can save your profile and use it on another PC. Naturally you can set the volume for both the headsets and mic. There's an equilizer included if there was ever the need of fine tuning. 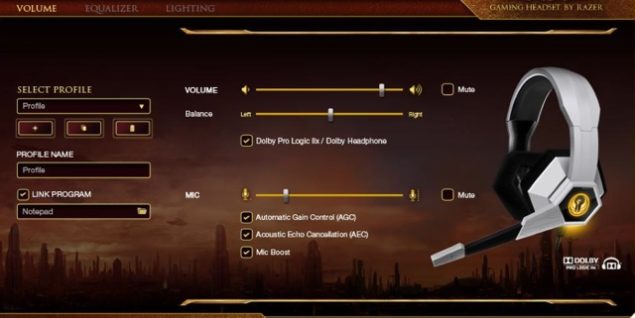 There's a separate tab for lighting. This allows you to customize the look of your headsets by changing the light color. There's no end to the amount of colors you can choose (over 16 million). A nice little feature included is the ability to set the brightness of the lights. There's an in game light effects tab that enables the headsets to automatically change colors when you're playing The Old Republic.

Razer has done a commendable job with these Star Wars branded headsets. Even though they're designed with the afore mentioned game in mind, they're still attractive enough to appeal to any gamer out there. In fact I'd say this the first time a company has made lights on a headset look appealing, which I wouldn't have ever though to be possible. It's a quality product all around.

As far as sound goes, Razer hasn't broken any barriers, however the inclusion of 50mm drivers is a welcome addition. I hope it's a sign of things to come because while they perform well with a USB interface, they would be a lot better on an analog sound card. At 129$ it's anything but a bargain. Lots of gaming headsets can be found for nearly half the price, and PC350 from Sennheiser (which is still the king of gaming headsets) aren't too far away either. However if you're a diehard Razer fan, this is one of their best offerings to date.