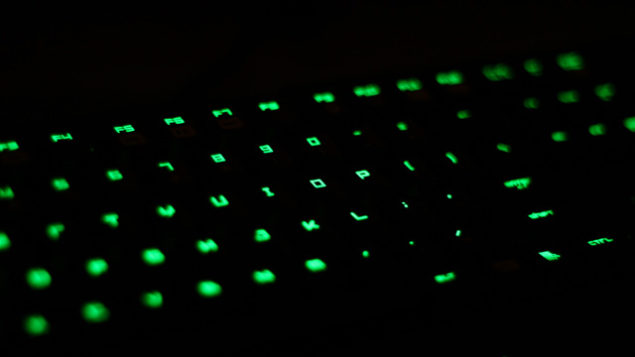 Razer has had a long history with high end gaming peripherals; polishing their perfection with every new product they have launched in the last 10 years. Taking on from budget gamers to enthusiasts, Razer has never failed to satisfy one’s taste for perfection. And the best part is that it gets even more better with every new product/revision they come out with. This time, it’s with the Razer BlackWidow Ultimate keyboard.

Probably and mostly I am certain of, the Razer BlackWidow Ultimate keyboard is one of the best mechanical keyboards one can buy off the market. Priced at $129.99 seems fairly reasonable since you are getting something that is almost as light as a feather on your finger tips as well as also your best friend when coming on to entering commands at lightening speeds when you’re engaging your enemy in the most intense possible situations yet.

As compared to the earlier BlackWidow Ultimate, Razer skipped out on having the glossy look for a more matte contexture for this latest revision. That is actually a good decision since once does not get those hand smudge marks left on this one that would ruin the looks of the keyboard.

Packaging wise it with Razer's Certificate of Authenticity, a quick start guide,a master guide and off course the Razer BlackWidow Ultimate keyboard itself.

Design wise the BlackWidow Ultimate looks very similar to the standard keyboard layout one can found mostly in the market yet there is a row of 5 distinctive macro keys on the left that comes in very handy when reloading in FPS games or just plainly sending out numerous keystrokes in MMORPG’s with just a press of a button.

The lighting on the Razer BlackWidow Ultimate keyboard is first of all of an illuminant parrot green color with the brightness being adjustable by pressing two keys (FN + F11 for lowering or F12 for increasing brightness) whereas as opposed to other Razer keyboards, this one in particular does not have interchangeable lighting colors.

This would seem a downside to many since one would be cashing around 100+ USD on a keyboard like this yet would lack the feature of having the color of their BlackWidow Ultimate keyboards to match the scheme of their possible enthusiast setup. Nevertheless, the keyboard is overall very well lit although the shift keys (i.e. ~!@#$%^&*()_+) have not been highlighted as the other keys.

The keyboard has a notably two of each foot long braided USB (gold plated) and 3.5 mm jack wires all of which are for powering the keyboard, the lighting, mic and headphone jack and as well as a USB socket on the right side of the keyboard.

Further moving on to the key selling point of the BlackWidow Ultimate are: The mechanical tactile keystrokes. There is quite a noticeable difference when using the BlackWidow Ultimate when I myself compared it to the Razer Marauder and a standard Dell keyboard. The Marauder had been easy to use but then again coming onto mechanical keyboards, you cannot beat the feel one gets on using this in terms of ease on the hands.

Of course there is a risk of RSI (Repetitive Strain Injury) when using keyboards of the standard layouts but I can rest assure you that risk is very unlikely when one is using such keys that have just a 2 mm gap in between the keys and the actuator itself so your keystrokes won’t be much of a problem although I did notice these mechanical keyboards tend to make a lot more clicking noises when in use as compared to the readily available non-mechanical keyboards.

No matter how a keyboard looks, expensive it maybe or packaged, they all work in one similar fashion and in this case, targeted at gaming. Since the keyboard layout is the same as all other standard keyboards (except the macro keys offcourse), this keyboard is targeted at all FPS, RTS, TPS and even MMORPG gamers alike.

Initially one will be hesitant on the use when moving on from a traditional keyboard layout as the keys have been moved more over to the right side to add more space for the 5 macro keys so for myself I can say it was a bit problematic but got used to it in a matter of hours.

I gave it a whirl on a few Call Of Duty titles as well as World of Warcraft and for sure enough I myself noticed an improvement in my overall response time when it came to fragging my enemy to quickly reloading my weapons and launching multiple battlefield attacks with the help of the macro combinations with just a single click.

As I had quoted earlier of the clicking noise sound from the keystrokes, it proved to be a nuisance at some point as when either I typed too fast or plainly scrambled while inputting commands, it seemed sort of as if one is playing the game with a lot of force on the keyboard but then again the onlooker can take it as you being one heck of a serious gamer and never mess with you in the first place!

No doubt the keyboard is excellent to use and very well designed, the clicking sound might be a turn off for some as well as the fixed parrot green lighting color yet one should not be put off by such little things when getting a mechanical keyboard.

Besides of all I had pointed out in my review, this keyboard is by far one of the best I’ve used in years and would recommend to anyone who’s willing to spend under $150 for a high end and super responsive keyboard that both looks good and feels good.