If Razer had just one iconic product in its entire lineup, that would have to be the Blackwidow keyboard. Throughout Razer’s long life, their signature keyboard has seen many revisions, from the keys and lighting within to expanding and dropping the number pad throughout the years. As the Razer Synapse software become more feature-rich, new functions such as Hypershift Keys and macros became a staple of the functions driving the Razer Blackwidow. Now, this year’s revision of the Razer Blackwidow Elite keyboard is well-deserving of Elite status, combining the features that gamers love with a little something new for those that enjoy some background music while they dominate the leaderboards.

Razer’s revamped switches for this year’s Blackwidow Elite keyboard offer a tactile touch that’s a bit different from what I’m accustomed to. Their Blackwidow Tournament edition from 2014 was my daily driver for such a long time, even during those awkward years when I primarily worked with an aging Alienware laptop and Samsung Chromebook to churn out my reviews. While it lacked the full 108-key array, that responsive ‘clack’ of fingers dancing across the keys became the ambient acoustics that accompanied my daily work. Fast forward a few years later and I tried out the Razer Cynosa for a brief time. Razer’s new ‘Mecha-Membrane’ for this budget-friendly Chroma keyboard was a bit too soft for my liking. Now, call me Goldielocks and the Three Boards, but I think what they did with the 2018 Razer Blackwidow Elite is just right: the Razer Green mechanical switches spring back against my fingertips with a satisfying amount of lift while offering less resistance and less mechanical noise than the other Blackwidow in my office.

Continuing a trend that I’m not a personal fan of, the Razer notification lights for essential effects, such as ‘Caps Lock’ ‘Number Lock’ and ‘Hypershift’ returns as a small array of five white lights. If you weren’t already a master of knowing which light corresponded to, you could easily find yourself toggling the same key on and off just to make sure of the status. It doesn’t help that the identifying marks are simply raised icons painted in the same matte finish as the rest of the Blackwidow Elite keyboard, making it impossible to spot in less than perfect lighting. The actual Caps Lock button itself will change colors when it’s engaged, so it’s not as if you’re stuck trying to figure out which of the five tiny LEDs actually indicates that your Caps Lock is on.

Now, what Razer does absolutely right with this year’s Blackwidow Elite keyboard is the new media dial that was previously featured on their Opto-Mechanical Huntsman Elite ($199.99 at most retailers). The entire media deck is condensed down to three simple buttons (Previous, Play/Pause and Advance, each with Chroma lighting underneath) and a snazzy little media dial that’s far enough out of the way that you won’t be reaching for it accidentally. The notched grooves adorning the media dial make it easy to fine tune the optimum volume while the mute button nestled in the center has a moat of Chroma lighting preventing it too from any accidental presses. You won’t be limited to using the volume dial for whatever audio devices you have plugged into the keyboard itself and I found myself opting to use the dial to control the volume on my Razer Nommo Chroma speakers without having to reach across my desk and waste valuable time. After all, it’s all about working smarter, not harder.

That media dial and trio of audio controls are for more than just music if you’re into customizing your tools of the trade. With the Razer Synapse suite, all five functions can be freely customized to your liking and I personally tweaked that media dial around to work as a rewind and fast forward function when I have to transcribe audio interviews. With the Razer Synapse 3 deck, the various functions that drive both the aesthetic and versatility of the Razer Blackwidow Elite are at hand.

Among the other bells and whistles that help justify the Razer Blackwidow Elite 2018’s higher price tag are the addition of a USB 2.0 and 3.5mm headphone jack on the left side of the keyboard (thus reducing any awkward cables sticking out the right side the might interfere with using your mouse or being bumped into when using the media dial). Also, this year’s Blackwidow Elite features a simple, no-frills handrest that magnetically bolts onto the southern edge of the keyboard. Even when furiously typing away at this review or rushing to make a 10 AM order on Limited Run Games before they sold out, neither task was enough to break that magnetic link and move the handrest out of position. The entire Blackwidow Elite board has a definite heft to it, so it certainly won’t be sliding out from under your dancing fingertips. If anything, it may be the first office tool I pick up in defense of a zombie outbreak.

Razer’s shown that sometimes, it’s best to go back to the basics when it comes to iterations. Many of the features seen in this year’s Blackwidow Elite were previously available on the Razer Huntsman Elite, but without the experimental OptoMechanical switches of the latter. Even if fiddling with Razer Chroma isn’t your jam, the Razer Blackwidow Elite still features a number of enhancements that can easily be worthy of being crowned the queen of your office space. I’ve already dethroned my old Blackwidow Tournament Edition from its four year reign and will be paying this year’s Blackwidow Elite tribute for many more months to come.

Review unit provided by the manufacturer. You can purchase the keyboard on Amazon. 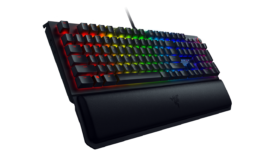 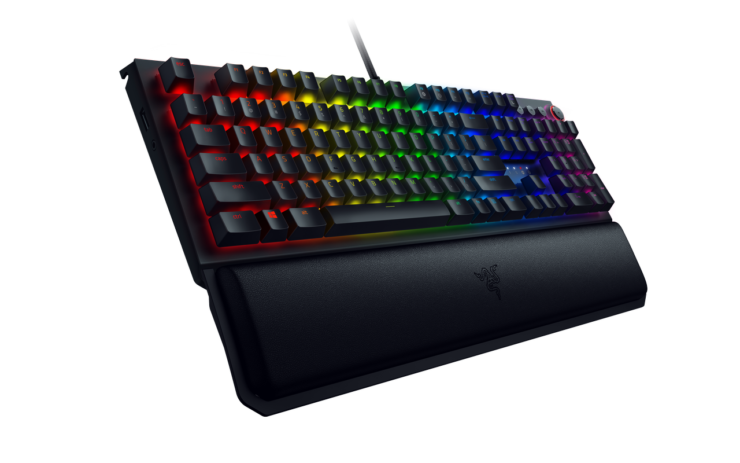 The Razer Blackwidow Elite represents the upper echelon of quality gamers can expect from Razer. Updated Razer Green switches lead to greater precision and the new media dial means comfortable listening is only a touch away.

How to Add an Escape Key to Your iPad, iPad Air, Pro, mini