Do you remember LAN parties, dear readers? Are you even old enough to remember going to LAN parties? When you and your friends would drag improbably heavy computers to a house to play multiplayer games next to each other. There was something magical about it, something that surpassed the simple days of couch coop. I remember playing Age of Empires 2 in LAN, and laughing evilly as I committed a massive betrayal of my team, decimating formally allied armies and reshaping the world in my image. Half the fun of betraying your friends (in-game) is seeing their reaction. That righteous fury that sweeps across their face, or the jealous indignation as they see the trap they’ve fallen into.

There is a reason that hidden role games are so popular in tabletop games, but struggle to translate into video game spaces. There have been attempts before like the aforementioned strategy games, Werewolves Within, or even Kane and Lynch multiplayer, but none have grabbed the players imagination and emotions as much as tabletop games. But a new contender has entered the arena, hoping to bridge the gap and bring hidden role games to the digital world, Project Winter.

In Project Winter, eight players must work together to complete routine objectives in a snowy and dangerous landscape. On the surface, it looks like a typical multiplayer survival, as players have to manage their temperature, health and food intake while gathering raw material and supplies for the community. But not everything is as it appears, and some of the players are not working in the best interest of the team. Secretly, some of the players are actually trying to sabotage the objectives, hoard the supplies and kill the isolated members of the team. 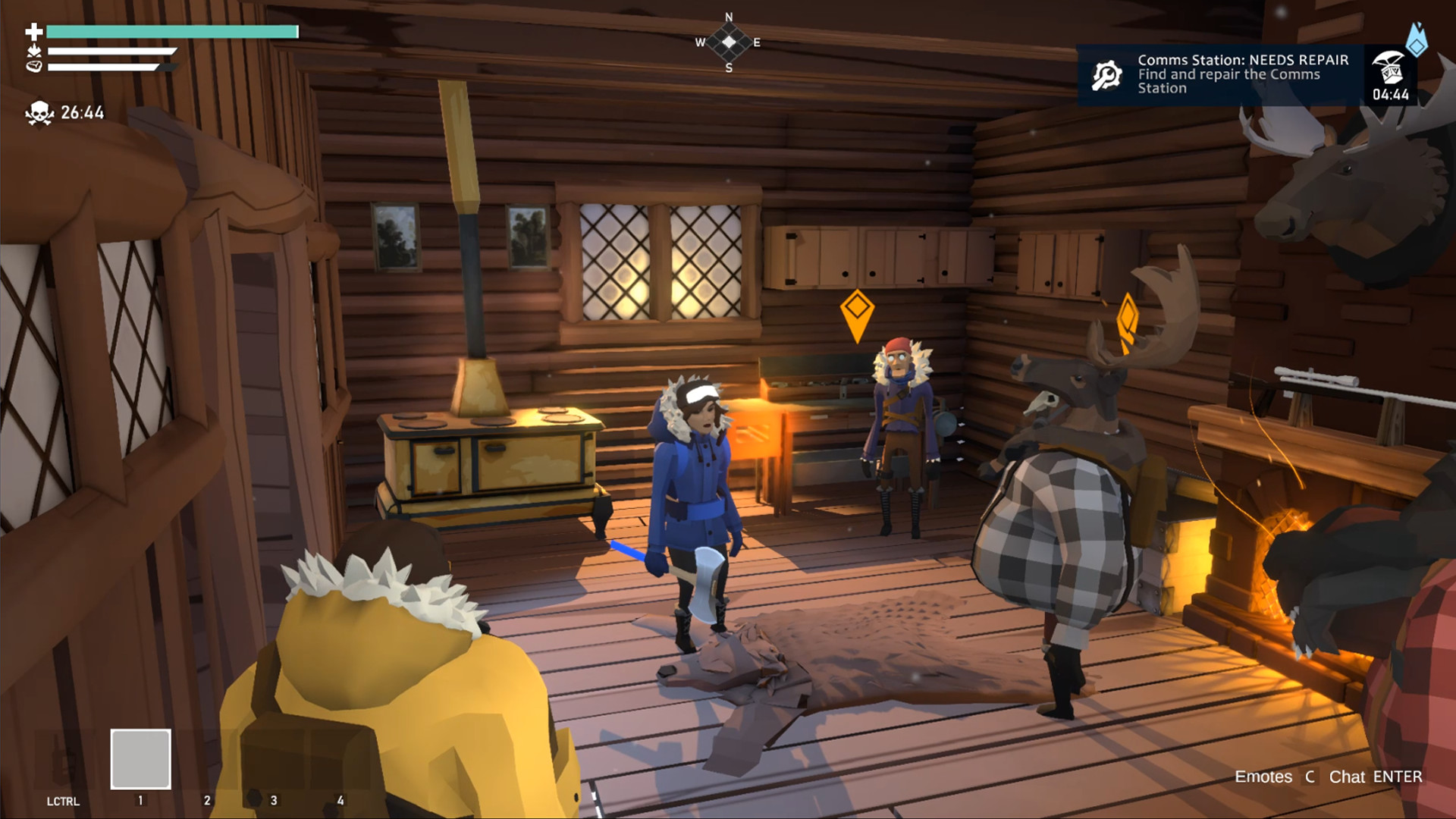 And for the most part, Project Winter works really well. The knowledge that someone out here is not what they seem adds an instant layer of the paranoia to everything you do. While the world is filled with wolves and bears that try and kill you, nothing puts you on edge as quickly as seeing another teammate approaching you on your own. While sensible ideas slowly erode away as the game progresses and resources dwindle.

Project Winter even has its own bespoke communication system. To begin with players can only speak in proximity, but you can start to utilize walkie-talkies to have public, and more importantly private, conversations as the game goes on. It does mean forsaking Discord, but the in-game chat is so instrumental to the subterfuge needed in this game.

Unfortunately, the game doesn’t quite solve the problem found in all hidden role video games. However exciting it is to explore the dark side of paranoia, it just doesn’t have the same effect if you don’t know the people you’re about to stab in the back or the people you will never trust again. Playing with strangers just doesn’t have the same thrill, and comes with a host of other issues that take away from the otherwise brilliantly designed core systems. While the game gives all the players busy work to get on with, communication is at the heart of the excitement in Project Winter. Traitors have to sow distrust in other players, while the good team have to share clues and information, and if one or more of the players isn’t willing to get involved, the thrill quickly falls apart.

In one game I found two players in a Mexican standoff. I tried to interrogate them to find out who started the fight, but when neither was willing to speak, I killed them both and moved on. We’ve all seen the clone fight in every sci-fi ever, and know how much fun it can be trying to work out who truly is on your side, but with silent players there is nothing to be done. 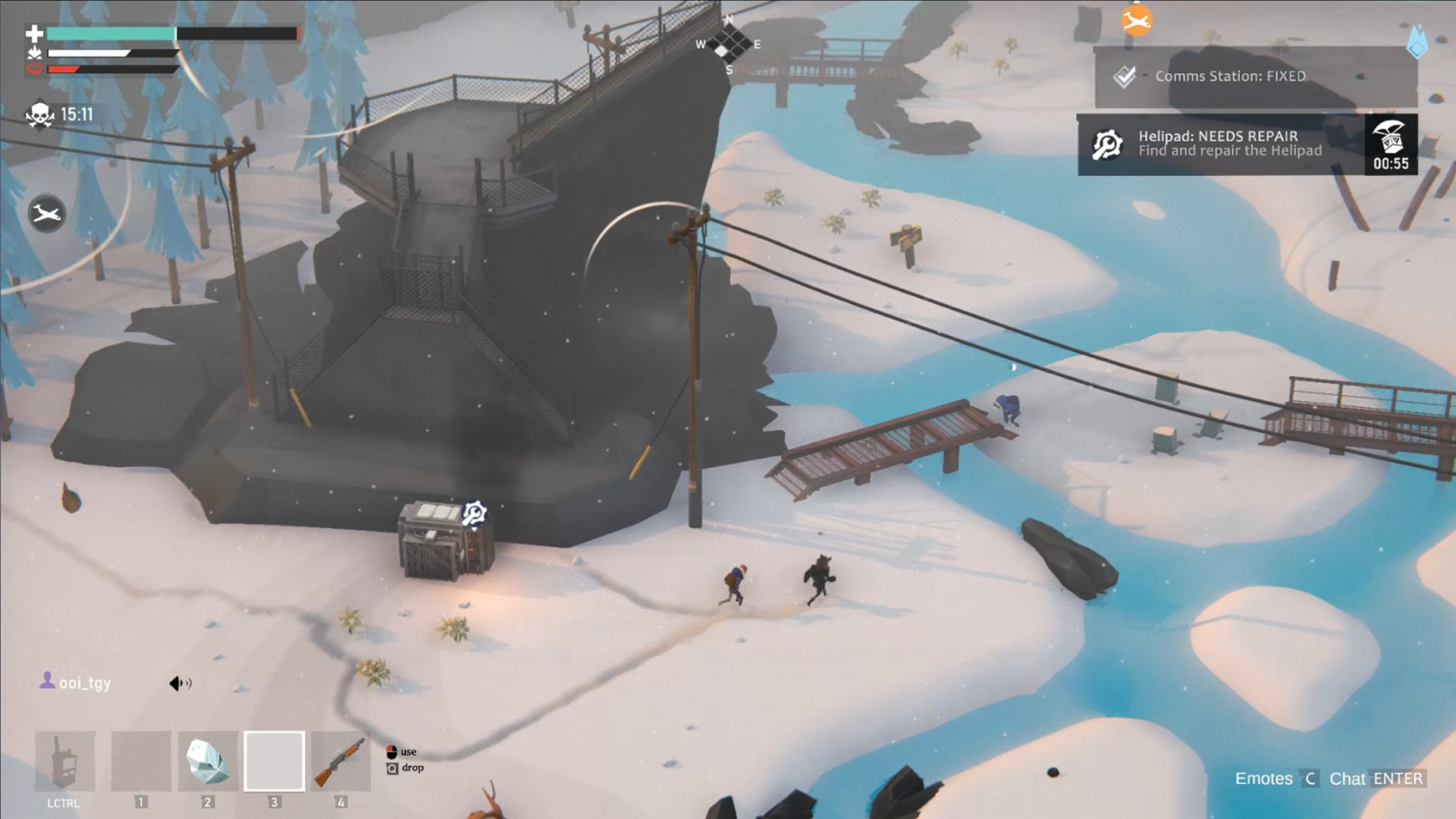 But if you play with friends, the game changes drastically. It is very tricky finding a time for eight friends to come online at the same time, with the same intention, but if you can organize that, Project Winter is one of the best party games to play. The matches aren’t too long, around twenty minutes once all the players understand the basic flow, and never play the same way. And some of the more subtle aspects of the game's design start to come into play. The snowy terrain leaves footprints that can be tracked, which means players can try and follow these clues. Some crates scattered around the world can only be opened by traitors which can lead detectives on a chase as players try to identify footprints to a specific player. After a couple of matches, teams can start to discover strengths, while traitors can devise counter plans to overcome them. In one game, I was the traitor and my team decided from the beginning to try and trip me up. Each player was ordered to explore in a different direction, making it impossible for a traitor to loot the traitor crates without being spotted. To overcome this, I walked back on my footsteps to the beginning and followed someone else’s steps until they came across a crate. From there I gathered what I could and dashed back to where I was meant to be. Later on, this put that player under a lot of suspicion as there's were the only crates opened.

Playing as the traitor feels completely different from the rest of the team. Attempting to deceive your teammates and friends, trying to act normal is suddenly very difficult as you doubt your every move. Even the sound design works against you as it highlights noise as players perform actions, making revealing activities all the scarier, especially if you want to do something like shoot another player.

The metagame can be just as fun as you continue to play with the same group. Players start to exhibit tells, creating the opportunity for players to play as detectives and hunters all in one.

I loved my time with Project Winter so far. Although you still don’t get the chance to see your friend's face as you stab them in the back, it has some of the best systems in any hidden role video game. But, however much I enjoyed it, I also struggle to recommend it to anyone that doesn’t have an exhaustive friend list of people willing to play this game. It looks like a community to developing around the game, but playing with a friend is even better. Throwing past favours and shared stories as emotional ammo on a real-life friend as they hunt you through the woods with a shotgun is as exciting, bizarre, unique and exciting as it sounds.

We'll check back to see how the game has evolved once it gets out of Early Access, so that we can provide a final score.

Subnautica Review – The Abyss Gazes Back Into You