I want to write something really witty for this intro. Something slightly humorous to get the writing juices flowing, but to be honest, I think playing Primal Carnage: Extinction has removed any and all imagination from my very being. Just thinking about the hours I’ve spent with this game is like a mental blockade which turns me into a dribbling mess because, and this is the real truth, Primal Carnage: Extinction is one of the most boring, least imaginative and overall bad multiplayer shooters I’ve ever played.

So here’s the premise: there are two teams, one team of human players and another team with dinosaur players. Yes, dinosaurs. You can play as dinosaurs. This fact alone means the game should be a straight-up 10 out of 10 any and every day of the week – I’ve been dreaming about a decent dinosaur game since Turok went downhill years ago, and here it finally is, a shambling mess of a game that probably should’ve been held up at Steam Greenlight. 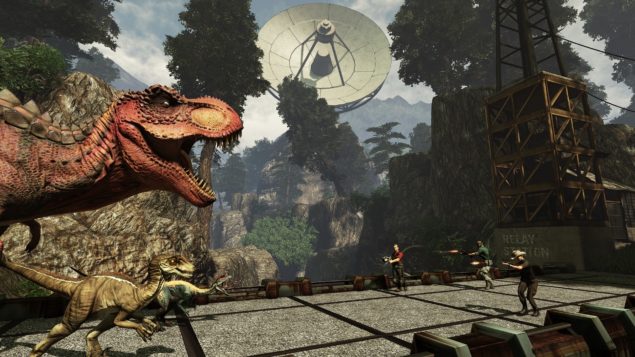 So, let’s start with the familiar, the human players. Ever played Team Fortress 2? Great, imagine if that game were awful and you’re halfway towards understanding what Primal Carnage: Extinction is. We have the long-ranged Scientist, a sniper with tranquilizers, the Commando who packs a rocket launcher and assault rifle, the stupidly named Pathfinder who just carries around a shotgun, the Trapper who can insta-kill small dinos with his net or stop the larger ones from chomping you to death, and finally, the Pyro. Did I mention it was a bit like a crap Team Fortress 2? Because I meant it.

Honestly, no matter which of these characters you pick your experience is likely to be the same. You will spend long periods of time just looking for dinosaurs to shoot, you will get eaten unexpectedly, and you will wander the few small and uninspired maps aimlessly. The experience actually shooting the dinosaurs varies between fairly exhilarating and intensely painful. A few times when using an assault rifle the ADS just decided to stop working for me, with the rifle placed painfully close to the screen – a clear bug, and one that definitely shouldn’t be there. That’s not to mention the fact the assault rifle feels terrible to shoot – whether you’re fighting against a big dino or flying one, it feels entirely ineffective and pointless. One of the least satisfying experiences I’ve had shooting a gun in any game ever.

The Pyro, on the other hand, is pretty enjoyable. His one-shot flare gun can burn up smaller dinosaurs, making accuracy with that weapon a lot of rewarding fun, while the flamethrower itself is – well, it’s fine. It feels ineffective, like many of the weapons in the game, yet seeing dinosaurs burst into flames and run around helpless is probably the most fun I had in the entire game.

Well, that’s the end of my praise, because now I have to talk about dinosaurs. 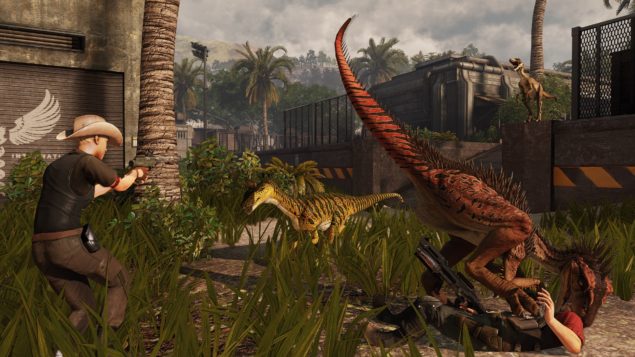 The dinosaurs – right – are absolutely atrocious. At first it was cool in a child-like fantasy kind of way, that I get to control a variety of dinosaurs, but all of them control terribly. All the dinosaurs have “interesting” abilities, but if I’m going to be brutally honest, big dinosaurs chomp humans with one bite, little dinosaurs do small amounts of damage but are very fast, and flying dinosaurs can drop people from height to kill them. That really is what this boils down to.

Dinosaurs are the power fantasy I’ve always wanted and this game just shat all over my hopes and wishes. I have always wanted to stomp around as a T Rex eating people, but now that I can finally do it, it’s entirely mundane, unsatisfying, heck, I think I might’ve had more enjoyment from trying to decide what game to play than actually playing this. I’m struggling to talk about how the game felt to play because when I try to remember all I can think about is how disappointed I felt.

One of these moments of disappointment was summed up in a single second, when a T Rex, with giant stomping footsteps, couldn’t step over a small ledge. It looked ridiculous, this huge icon of the prehistoric era requiring a disabled access ramp because the developer didn’t think that, hey, this big creature might be able to step over stuff. 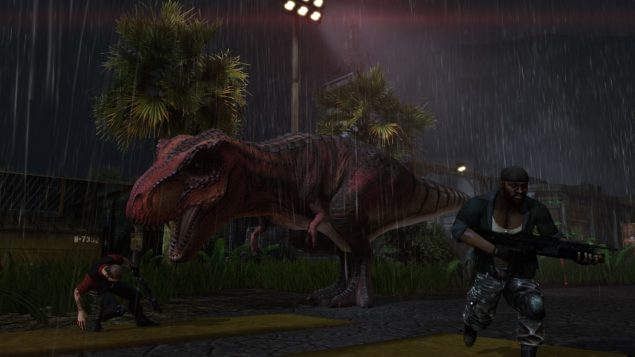 There are four game types in total – just four – Team Deathmatch, Get to the Chopper, Survival and Free Roam. I’m going to sum these up really fast:

Team Deathmatch – you know what this is.

Get to the Chopper – work from one point on the map to another in order to escape. This one might’ve been fun but whenever I tried to play I was literally the only person in the game.

Survival – just like any other wave-based game where you survive for as long as possible.

Free Roam – no points, no timer, just you in a map doing whatever you wish. Good for testing the different weapons and classes but no reason to use otherwise.

There we go – four game types summed up very quickly, with one of them essentially being a training mode and another in a constant state of unpopularity.

Onto how the game looks – can you say “last gen”? The framerate is not good for a shooter, textures look truly awful, some areas of geometry on objects stick out like a sore thumb, almost like the textures haven’t loaded properly… It looks like a mess, to be perfectly honest.

And to finish, a little bit of praise: the sound design is cool. Sounds like dinosaurs are roaring away in the distance, which can feel really intense and mysterious when you can’t see any nearby. But these moments are all too brief.

Well, that’s it. That’s Primal Carnage: Extinction. I wouldn’t recommend anybody ever play this. There’s a good idea here, but that really is the extent of it. A good idea. The execution is possibly some of the worst I have ever seen released on console. Perhaps in the PC incarnation there’s something unique and brilliant about this game, but on PS4 it’s a terrible version of Team Fortress 2 with dinosaurs. Avoid it like a trip to Jurassic Park where you get VIP seats to the T Rex feed.