Given the Nintendo 64 was already well into its lifespan when the original Pokemon Red and Blue released in 1998 in North America, it’s no exaggeration to say fans have been dreaming of a 3D open-world RPG take on the franchise since Day 1. Actually getting to that point has been a long journey as series developer Game Freak has resisted every break from series tradition to the bitter end. So, the fact that Pokémon Scarlet and Violet exist at all feels like something of a miracle. Full open-world HD Pokémon RPGs! After two-and-a-half decades of dreaming, it’s actually happened!

Of course, sometimes the thing you wished for doesn’t turn out to be what you actually wanted. Are Pokémon Scarlet and Violet a super-effective shakeup for the series or an over-ambitious Poké-bomb? Time to see if these games are worth adding to your collection…

Pokémon Scarlet and Violet take place in the sprawling region of Paldea. Rather than just being unceremoniously shooed out the door to wander the world catching violent monsters, you’re initially sent to a Hogwarts style academy to learn the ways of Poké training. While you’ll meet a number of colorful characters at the school, don’t worry, you don’t have to make it to regular classes, as it’s soon time for the traditional “Treasure Hunt” where young trainers are sent out into the world to find their path in life. So yes, you’re once again wandering the world catching Pokémon, but the school acts as a nice home base and the child endangerment feels a tad less brazen.

When Nintendo and Game Freak boast about Pokémon Scarlet and Violet being the first true open-world games in the series, they really aren’t joking. Before you leave the school you’ll gain access to one of two ridable legendary creatures -- Koraidon for Pokémon Scarlet and Miraidon for Pokémon Violet (Nintendo sent me Scarlet for whatever reason, so I got the former). From there on you’re pretty much free to go in whatever direction you want. While a few places require you to upgrade your mount to access them, the vast majority of the map is accessible from the get-go if you’re determined enough. Pokémon S&V have no level scaling, so you may stumble upon creatures that will eat you for lunch, or alternatively, you can become over-leveled for certain areas. Some may find this frustrating, but personally, I’ve always found level-scaling irritating and unrewarding. These games are willing to let you screw up, to play them “wrong,” and they’re all the more exciting for it.

Venturing out into the world of Pokémon Scarlet and Violet may feel a bit intimidating at first, which isn’t helped by a cluttered, somewhat archaic map, but you’ll soon find plenty of structure in the game’s three separate story campaigns. In addition to the standard “Victory Road” quest to collect gym badges, you can also tackle “Path of Legends,” which sees you take on giant Titan Pokémon to earn magical herbs, and “Starfall Street” that tasks you with taking down Team Star (the latest Team-Rocket-style baddies). Each of these campaigns could stand as one of the most unique and compelling in Pokémon history – the fact that we get all three in a single game is an unexpected gift.

Starfall Street provides some surprisingly-tough boss fights and a couple twists and turns I legitimately didn’t see coming. Path of Legends is more low-key, but the earnest Arven who guides you in your Herba Mystica hunt is one of the most likable characters I’ve ever encountered in a Pokémon game, and his quest to save his ailing canine companion is surprisingly raw stuff. Even the usual Victory Road campaign is more interesting than usual, with a truly unique cast of gym leaders like the livestreaming superstar Iono, the dead-eyed salaryman Larry, and rapping granny Ryme, to name just a few. You also have to complete various challenges before facing each gym leader, which include a snowboarding trial, finding the secret dish to order at an exclusive restaurant, and rolling a giant olive through an obstacle course. These challenges are usually very easy, but they add a bit of extra flavor to the process of earning each gym badge.

My only real complaint about Pokémon Scarlet and Violet’s three campaigns is that none of them really make much use of the open world. You go to a point on the map and everything you need to do happens around there. Ultimately though, this isn’t a huge deal, as the open world is compelling for other reasons. In the end, all three campaigns come together in a satisfying way, leading to surprisingly impactful ending for this traditionally light-touch series.

Of course, the core of the mainline Pokémon games will always be catching ‘em all, and that’s where this game’s open-world shines. Paldea is impressive in scope, and like other Nintendo-published open world games like Zelda: Breath of the Wild and Xenoblade Chronicles, trying your find your way to the next point sometimes feels like a puzzle in its own right with plenty of opportunities to sequence break. Pokémon Scarlet and Violet feel alive in the way past 3D games in the series haven’t, as its world is packed with towns, fellow trainers, NPCs, and, of course, lots and lots of catchable critters.

Fans of Pokémon Legends: Arceus may find the process of catching Pokémon in these games a touch disappointing, as the way the creatures interact with the environment isn’t quite as natural here and you can no longer grab ‘em just by throwing a Poké Ball. But ultimately, Pokémon Scarlet and Violet are meant to be more traditional RPGs, so I didn’t really expect them to carbon-copy Pokémon Legends’ systems. The excitement of discovering some rare and powerful creature as you explore some out-of-the-way path is still very much present.

Combat itself hasn’t changed much. The basic rock-paper-scissors system is still in effect, but there are now so many varieties of Pokémon, many of which mix types in novel ways, that it’s no longer a simple case of using the fire type to beat the grass type or the electric type to beat the water type. Game Freak have steadily added new depth and challenge to their battle system without changing the fundamentals. The big new feature this time around is the ability to “Terastallize” Pokémon, which essentially turns them into living crystal figurines, boosting their stats and sometimes changing their type. You Terastallize your Pokémon using a special orb, which can only be used once before you need to recharge it at a Pokémon Center. Terastallizing doesn’t come into play during most battles, but it does add a touch of excitement and drama when you’re facing off against gym leaders and other bosses.

A number of other assorted features have been added to Pokémon Scarlet and Violet, some more essential than others. You can now set down a blanket and enjoy a picnic almost anywhere you desire, which is cute and provides a convenient venue for Pokémon breeding. You can also now join up with other players online to explore the world, which is low-stress, if somewhat aimless, fun. More exciting are the co-op Tera Raid Battles against high-level Terastallized enemies, which are some of the most satisfying challenges you’ll find in these games.

At this point, you likely have the impression I really enjoyed Pokémon Scarlet and Violet, and frankly, you’re right. That said, these games’ presentation is a Snorlax-sized matzo ball that can’t be ignored. Pokémon S&V aren’t quite as ugly as the worst screens and clips being circulated would imply. The game is brighter and crisper than Pokémon Legends: Arceus and, believe it or not, there are times when it actually looks rather nice. That said, there’s no denying there are some very low-poly objects and blurry Gamecube-era textures in this game and performance can be dreadful. At times, 20fps feels like a best-case scenario, with the appearance of lots of NPCs and/or weather effects making things even worse. Like many recent Nintendo games, objects at a distance run at even lower framerates, except in this game “at a distance” can often mean five feet in front of your character. Wonky visual glitches are also common, although thankfully, I haven’t encountered any crashes or anything that required a reset.

So yeah, Pokémon Scarlet and Violet are a mess technically. The question is, does it matter? At the risk of opening myself up to criticism on this tech site, I’m going to say… mostly no. If these games were action-RPGs or platformers, this level of performance would be a disaster, but they’re turn-based RPGs that still rely on mechanics designed to work on the original black-and-white Game Boy. The only gameplay-affecting issue is pop-in, which can make it hard to quickly assess the Pokémon in an area, but again, this is a series that still had random battles until literally this year. I’ve seen plenty of angry accusations that the state of Pokémon S&V is due to laziness or indifference on Game Freak’s part, but I don’t really buy it. In every aspect other than technical performance the amount of effort and love sunk into this game is abundantly clear. The roughness of Pokémon S&V is most likely due to a lack of development time and Game Freak’s ambition simply outstripping their technical expertise (let’s not forget, the studio released their first HD Pokémon game only four years ago).

As janky as Pokémon Scarlet and Violet can be, I never felt like its issues were pushing me away. When I wasn’t playing, I was often thinking about what I wanted to do next, and there was always plenty to keep me busy. Pokémon S&V’s three main stories and finale can be completed in around 20 hours if you keep your eye on the ball, but you’re likely to get sidetracked often, and as usual with this series, there’s plenty of endgame content. Of course, as always, the sky is pretty much the limit for those who truly want to catch ‘em all and craft the perfect competitive team. This game will catch you if you give it half a chance.

This review was based on a copy of Pokémon Scarlet provided by publisher Nintendo. 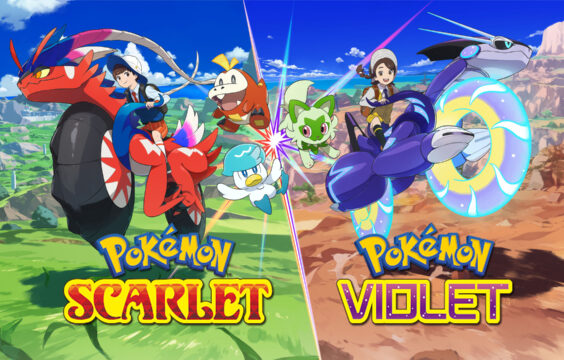 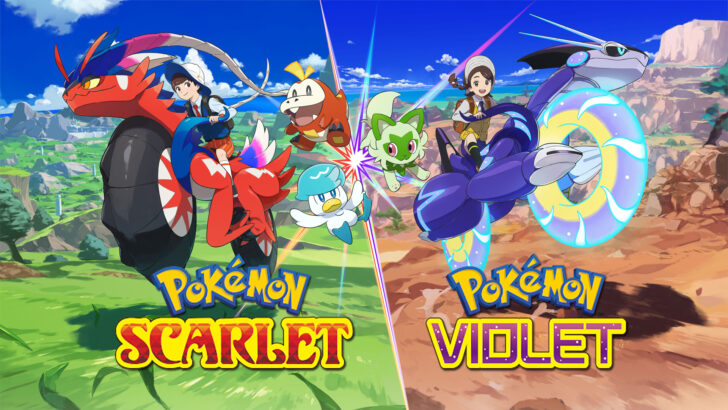 Pokémon Scarlet and Violet largely deliver the open-world RPG experience fans barely dared dream of for decades, with a huge, lively map and a surprisingly-engaging trio of stories nicely complementing the franchise’s rock-solid core mechanics. Yes, the game has more than its share of technical issues, but its shortcomings are largely cosmetic and the folks most excited to play probably aren’t going to be that bothered about its pixel count or performance. This Pokémon may be humble-looking, but it brings the fight where it counts.