Pokémon is that rare franchise so prolific even some of its spinoff series are starting to get hard to keep track of. Case in point, the Pokémon Mystery Dungeon games, which mash up monster collecting and roguelike dungeon exploration – the sub series has already been through five generations and 10 individual games and now it’s getting its first reboot, Pokémon Mystery Dungeon: Rescue Team DX (a revamp of 2006’s Red Rescue Team and Blue Rescue Team). 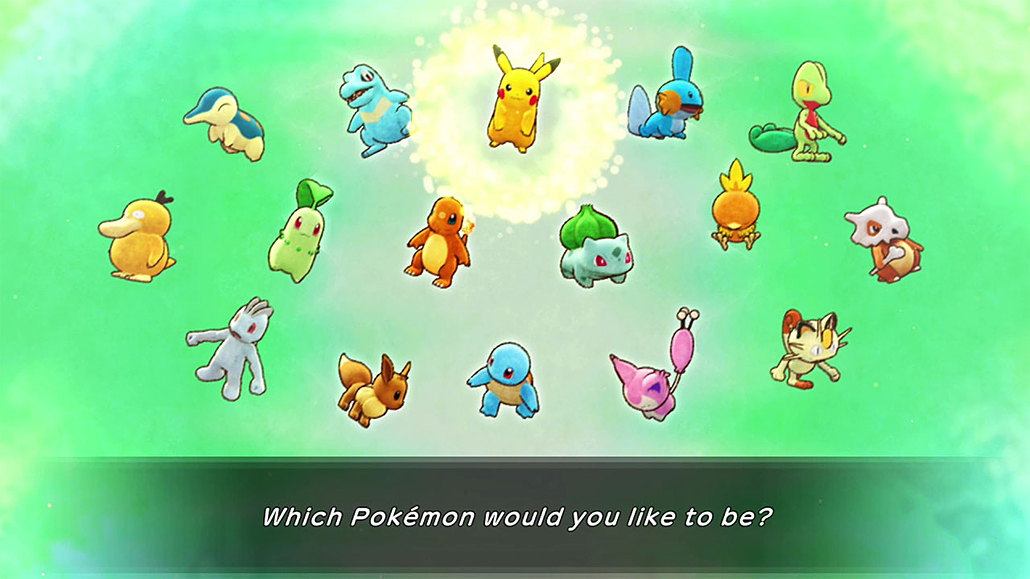 Pokémon Mystery Dungeon: Rescue Team DX casts aside the usual franchise setup – you don’t play as an aspiring trainer, but rather a human that’s been turned into a Pokémon for mysterious reasons. In a fun touch, the game opens with a personality test of sorts that determines what creature you’ll play as (don’t worry, you can make your own choice if you don’t approve of the game’s pick).

The rest of the game takes place in a world entirely populated by Pokémon that speak in full sentences, which is cute, but don’t expect anything too clever. The writing and localization of the core Pokémon RPGs has gotten sharper in recent years, but this game is from an earlier era, featuring dialogue aimed at players just learning to read. Dry writing aside, Rescue Team’s plot actually isn’t bad – the world is being rocked by a succession of natural disasters and it seems the player character turning into a Pokémon might have something to do with it. You’ll interact with a wide variety of Pokémon and other rescue teams, both friendly and not-so-friendly, and there are a few mild twists before you finally figure out what’s going on. Your mind isn’t going to be blown, but the story’s certainly more interesting than the standard “catch Pokémon, become champion” narrative. 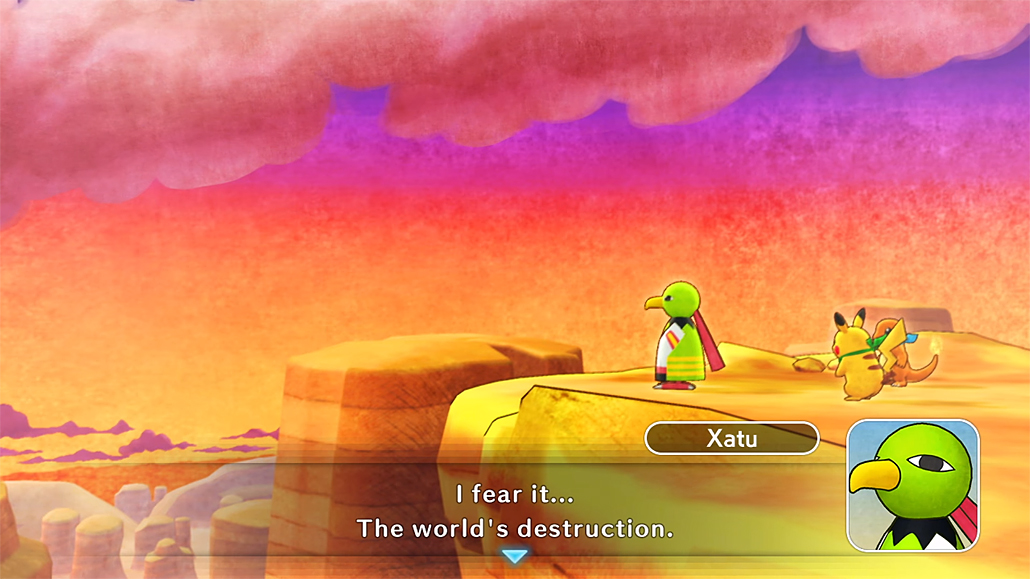 Perhaps Rescue Team DX’s story and world would pop more if its visuals were a touch more polished, but unfortunately, the game looks kind of cheap. Developer Spike Chunsoft opts for a visual style that makes the game look a bit like an impressionistic watercolor, but low-polygon characters and environments, stiff animations, and smeary textures blunt the effect. Rescue Team DX serves up a few brief moments of beauty, but most of the time it looks bland at best. At least the game’s music, which sounds quite unlike anything from the core Pokémon RPGs, is pretty solid. 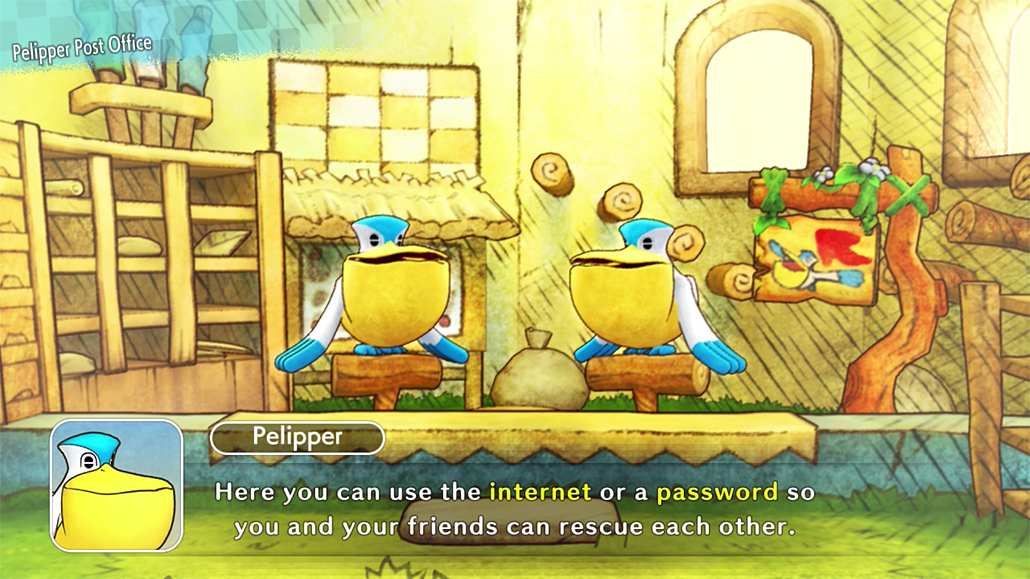 If you’re concerned Pokémon Mystery Dungeon: Rescue Team DX is going to be a punishing slog given its Rogue-inspired elements and the nasty reputation of some of Spike Chunsoft’s other RPGs, like the Shiren the Wanderer series, you needn’t be too worried. Rescue Team DX is definitely more roguelite than roguelike. In traditional roguelikes you lose everything if you die in a dungeon -- progression, XP, items, money -- but in the Pokémon Mystery Dungeon games you only drop your items and money, and there are a number of ways to mitigate that loss. You can ask other online players to rescue you if fall or you can assemble a team from your backup Pokémon and save yourself. And if you decide not to bother with a rescue and take the loss, a special limited-time dungeon filled with good items will pop up so you can replenish your stocks. Don’t get me wrong, failure still stings a bit more than in your typical Pokémon game (be prepared for possible tantrums if you buy this one for young children), but as long as you prepare properly, death should be relatively rare. 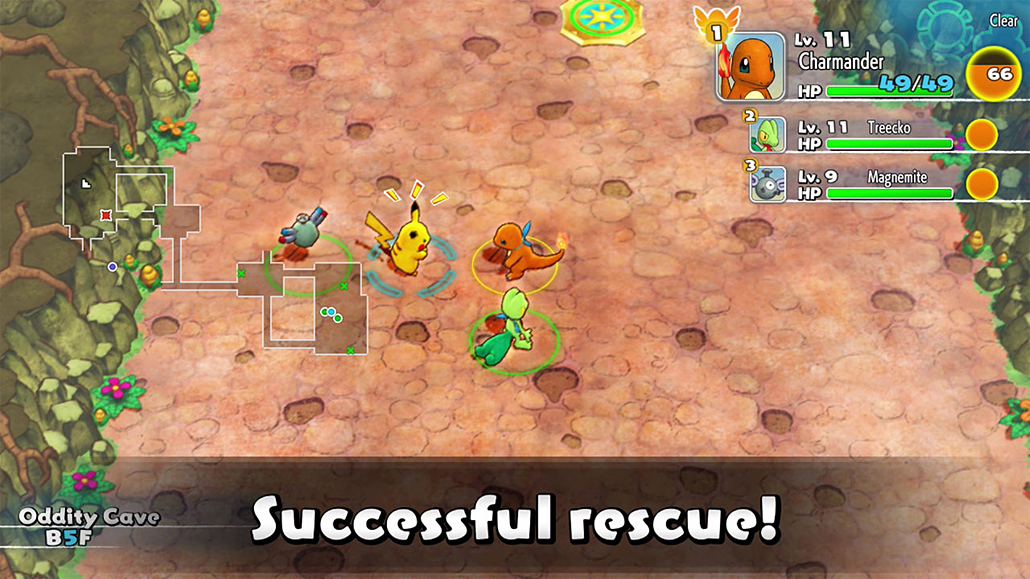 The Pokémon Mystery Dungeon games may sand down a lot of their roguelike hard edges, but there’s still something compelling about exploring their randomly-generated dungeons. For those new to the series, dungeons are grid-based with enemies moving one space for every space your party moves. You also regain 1 HP every step you take, which means carefully watching the map and strategically choosing when to fight and when you avoid conflict and heal is key to success. Item rationing is also important and getting through a 25-floor dungeon by the skin of your teeth after you’ve spent all your healing and revival items will get your heartrate up. Sure, most of the dungeons you’ll encounter during the main story aren’t terribly challenging, but the postgame can be tough.

Unfortunately, a number of Rescue Team DX’s new “improvements” actually undermine its core dungeon hacking. For instance, the game has a new “Auto Mode,” which lets you turn over dungeon exploration to the AI with a push of the L trigger, and you can now unleash moves simply by pushing the A button. I’m all for timesaving features, but if you automate both dungeon exploration or combat, what exactly do you have left? Another example is the game’s revamped training dojo, which now lets you level up in only seconds if you trade in special tickets, trivializing the process of building up your Pokémon. I get that the developers wanted to make Pokémon Mystery Dungeon more approachable than it already is, which isn’t necessarily a bad thing, but I’d prefer some more thoughtful improvements. For instance, it would be great if the game made it clearer where you need to go to find certain items. As is, if you’re looking for something specific, you’re pretty much stuck randomly slogging through dungeons in hopes it will pop up. I don’t mind a bit of grinding, as long as I don’t feel like I’m wasting my time. 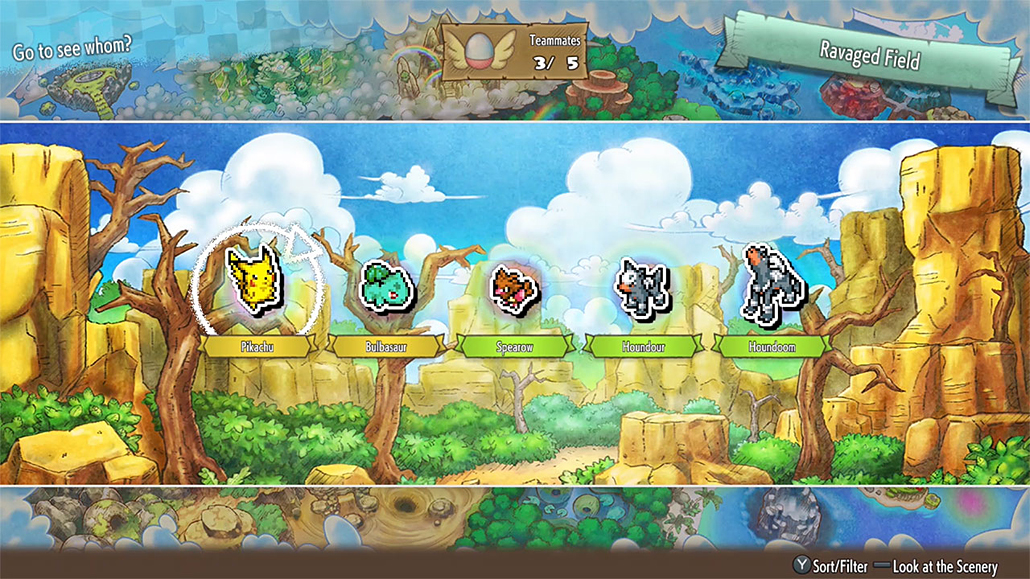 The Pokémon Mystery Dungeon games could also stand to reexamine how they handle the actual catching of Pokémon. The process is more complex than in the core Pokémon RPGs – occasionally when you defeat a Pokémon it will offer to team with you (there’s now an 8 critter party limit) and if it’s still around when you finish the dungeon you can keep it, provided you’ve built the appropriate Rescue Team Camp. There are dozens of these, and you don’t know which Pokémon belong in which camp until you encounter them, so more often than not the excitement of meeting and recruiting a new ‘mon immediately turns to disappointment when you realize you don’t have the proper camp to keep them in. There is a special item that will let you build new camps while in a dungeon, but many Pokémon, even some of the earliest ones you encounter, require very expensive camps and, of course, it’s not a good idea to carry a lot of money into dungeons.

Ultimately, trying to Catch ‘Em All feels more burdensome than it should. Rescue Team DX’s Pokedex is also somewhat uninspiring – the original Red and Blue Rescue Team games included a then-complete collection of 386 Pokémon, but don’t expect the remake to be similarly up to date. Without spoiling anything, I will say there are a few new Pokémon to collect, but I’m not really sure what rhyme or reason went into choosing the additions. 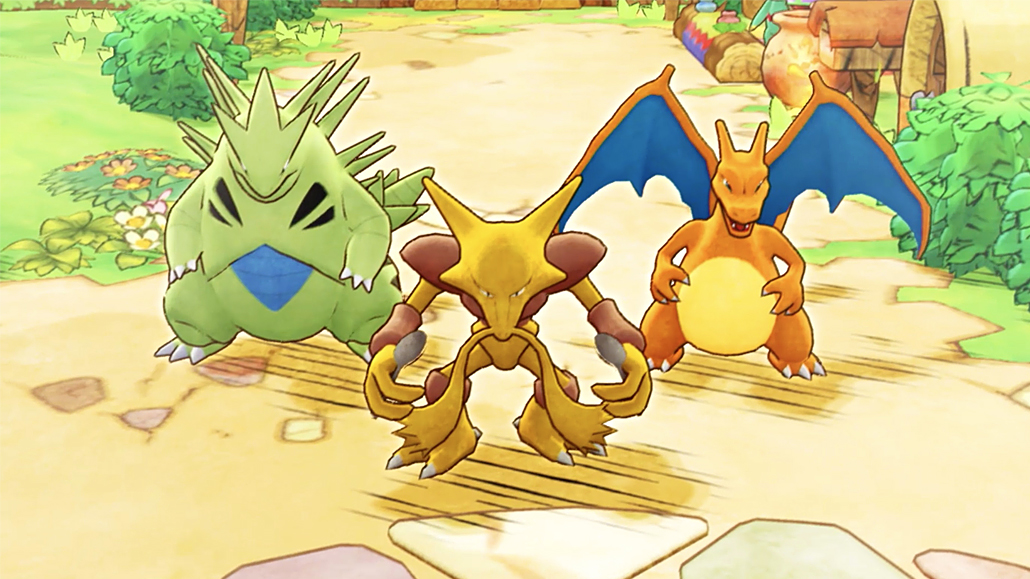 So yeah, Pokémon Mystery Dungeon: Rescue Team DX might not be for you if catching monsters is your main concern, but if dungeon exploration is more your thing there’s plenty to keep you busy here. You can complete Rescue Team DX’s main story in around 15 hours, but beating the game is really just the beginning, as there are many additional post-game dungeons you can spend dozens upon dozens of hours exploring. You can get lost in this Mystery Dungeon for a good long time if it’s to your liking.

This review was based on a copy of Pokémon Mystery Dungeon: Rescue Team DX provided by Nintendo. You can pre-order the game on Amazon.

Pokémon Mystery Dungeon: Rescue Team DX doesn’t really set out to bust expectations. It’s a decent little remake of a decent little game. While a lack of challenge, so-so presentation, and an unsatisfying approach to Pokémon collecting limits Rescue Team DX’s potential, exploring the game’s dungeons has an undeniable Zen appeal and there’s certainly a ton of content to work through. This Mystery Dungeon is worth unraveling, provided you don’t mind a roguelike that’s more relaxing than rigorous.