Ken Follet's The Pillars of the Earth - Part 1: From The Ashes

Knowing the generally grandiose stories you find in games, this will seem like an outlier. Zombie apocalypses. Survival in a grand war. Overthrowing an evil, tyrannical empire. These are all elements you'll find in other games. Here you face such overwhelming tasks like finding work or looking for a letter. You can also find yourself with the overwhelming job of restoring a priory to good order. Though this may be exciting enough, Pillars of the Earth is set against the backdrop of a civil war. One you'll find yourself embroiled in sooner, rather than later.

On that note, here's my review of Ken Follett's The Pillars of the Earth - Part 1: From the Ashes - Complete Contempt for Cathedral Constructors.

My first paragraph may seem a little too facetious. Especially when you consider that, despite the mundanity of most tasks you're set, Pillars of the Earth is incredibly engrossing. As the title suggests, the game is based on Ken Follett's novel of the same name. While TV shows and films commonly find themselves working from a novel, games not so much. There are exceptions of course, such as the brilliant Witcher and Metro games.

Daedalic have set themselves a very difficult task of working from a novel that's massive in its own right. With this challenge comes a number of difficult choices. How do you adapt a huge, 1000+ page novel into a story without either missing out essential parts or without including too much and spreading the game too thin? Furthermore, the story touches on a number of sensitive matters. From religion and beliefs to the brutality of medieval life. It even touches on personal issues like family strife and the abandonment of a newborn baby.

Pillars of the Earth doesn't seem to follow Daedalic's usual adventure game style of storytelling. There's little doubting that it acts and feels like a traditional adventure game. However, instead of simply following a linear path with set puzzles to solve, there's a focus on decisions and the character building that comes from this. In essence, it feels very much like a Telltale adventure game.

Throughout this first part of the story, which acts more as a prologue of things to come, we're introduced to three main characters. We start with Tom Builder who is, surprisingly, a builder. His parents may have been clairvoyant, though this is a mystery not touched upon. We join him and his family in the wilderness, cold, thirsty and starving. This is primarily due to Tom's ambitious aim of building a cathedral and, as such, having rejected mundane work.

It's immediately made clear in the prologue chapter that the game has no problems touching on sensitive subjects. Tom's wife is clearly pregnant, only her water broke earlier that day without telling you. She's ready to give birth, but there's a lot of blood. After a successful delivery, everything is seeming well, though Tom's wife passes away through blood loss quite quickly.

This is where I need to go off on a tangent and talk about the art style. Why now? Because of the outstanding work Daedalic have done and what it does for the characters. The backgrounds are highly detailed, from crumbling brickwork of a well to broken branches of trees in a forest. Although the locations are limited, there was clearly a lot of thought and work put into them. The use of colour and lighting is also exquisite, with the palette choice giving each area an almost painted feel.

Contrary to the art style of the backgrounds are the characters. These are almost cartoon-like at first glance. It's easy to look at this as an issue to begin with, that they stand out a little too much against the background. However, that quickly falls away as you realise that these are also incredibly designed and well animated. The animations, how the characters express themselves, only enhances the world and adds a great level of characterisation. You can literally see the worry, confusion or abject terror on a characters face, and it draws you in.

Before you've even had time to absorb the prologue the game jumps to the second character. Prior Phillip of Gwynedd. A religious man, Phillip is on his annual New Year's Day visit to Kingsbridge Priory. Finding the place in disrepair and that the previous prior had died just a few days earlier, he is unimpressed by current proceedings. Particularly as the one looking like the next prior may as well have "Evil" stamped on his head.

This is only the start of a long, complicated journey for Phillip. The major point of intrigue comes from his brother, Francis. Francis is quite active in politics and asks Phillip to help him where he can. His first thing is to find a letter that indicates plans for a pre-emptive strike. Francis also wants to keep his name out of everything, which leads to internal conflict as Phillip is torn between revealing his brothers' involvement or lying to those around him.

Finally, we're introduced to Jack. A young man, raised in the wilderness by his mother, he runs into Tom and his family. Helping Tom track Francis, who happened to come across Tom's abandoned newborn, two of the main characters are united. This is particularly true when Tom and Jack's mother start getting much closer. More interesting is when the story really starts to gain some traction when Tom, Jack and Phillip all meet, though I'll avoid spoiling any of that.

I've written a lot about the characters and the plot of the game, not much about the gameplay though. Honestly, there's not a lot to say about it. If you've ever played an adventure game, you'll be pretty safe in continuing to do what you've done before. Each chapter presents you with a number of puzzles to solve. As can be expected, Pillars suffers from adventure game logic and an extensive amount of backtracking.

Although puzzles are at least somewhat logical, they can be incredibly obtuse and simply not offer any clues. For example, one puzzle has you needing to help an elderly monk who is suffering from the cold, otherwise he can't attend a vote you want him to. Ideally, you'll have explored enough and found a dirty rag and decided to pick it up. Then, you see other monks preparing food over a fire with stones surrounding it. Without the rag you can't pick up the stone, it's hot, but with the rag you can pick it up, wrap it and give it to the monk. Success!

One somewhat interesting thing Pillars of the Earth does is with the inventory system. In addition to items, the game gives you clues or talking points as part of the inventory. One example is a task of finding masonry work that needs doing. You can select this and use it to initiate a particular conversation with somebody or look at an area for that particular thing.

The strange thing about these puzzles is that they rarely result in a failure state. Rather, the majority have an impact on future story events or at least dialogue. For example, failing to smoke a deer results in a comment and a rather disapproving stare later on when all there is to eat is soup. I can't say I know the full story of Pillars of the Earth, only having read a few chapters of the novel. What seems interesting is that the fates of certain characters can be changed and that even small choices, or missed puzzles, can have larger ramifications down the line.

I'm literally saving the best 'til last, the best being the script and voice acting. Although not new, it's still impressive how the game will recall even the most basic of actions you've taken. In addition, conversations offer branching dialogue as well as the ability to simply remain silent. Your actions and conversation choices are later referenced and characters react accordingly.

It's how they react that's most impressive. The script is top notch, being one of the more realistic and character building ones you'll come across. It's compelling just listening to the characters talk, wondering what they'll say next. Of course, no matter how good the writing is, it would fall flat without good voice acting. This is also just as great. You'll run across a variety of British regional accents, each performed as good as you could expect. More important is just how emotive they are, really getting across the characters thoughts and feelings.

If the first part of the game is anything to go by, Daedalic seem like they're up to the challenge. With an outstanding art direction and a great script, not to mention the voice acting that goes with it, this is a world you can easily get absorbed in. More so, the game has added weight and consequence to what could seem as mundane tasks. Though it isn't without its flaws, including a little too much backtracking and a bit of adventure-game logic, I'm still more than impressed with Pillars of the Earth.

PC version reviewed. Copy provided by publisher. You can buy it for PlayStation 4 or Xbox One via Amazon. 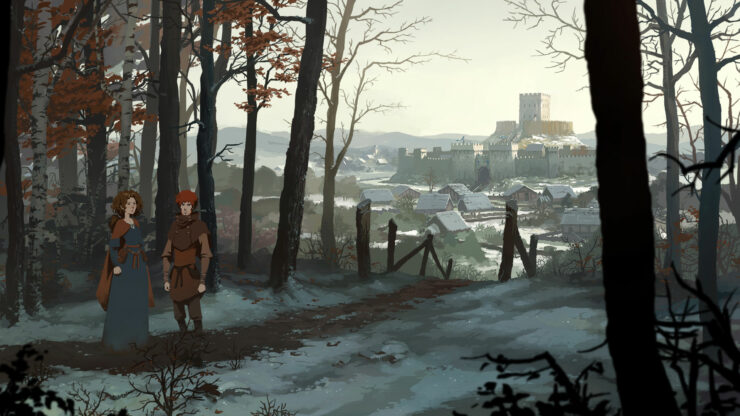 8
Wccftech Rating
Ken Follet's The Pillars of the Earth - Part 1: From The Ashes

Ken Follet's The Pillars of the Earth is a surprisingly well grounded game. As mundane as the subject matter may seem at first, it's incredibly absorbing as you follow the lives of realistic people. While not perfect, suffering from general adventure game problems of backtracking and long-winded puzzles, the game more than makes up for it with compelling characters, a great script with fantastic voice acting and an aesthetic design that benefits the game greatly.