In any good strategy game, there's an enormous sense of risk. Victory is never assured, no matter how dense your army may be, and watching the units you have carefully cultivated over hours of play die by the hands of an overwhelming enemy is heartbreaking. Add to that a good amount of terror from being on the frontlines yourself, and that's essentially what Pikmin is. Carefully producing a capable force, only to have it all fall when the fight kicks off. Watching Pikmin cry as their ghosts leave their bodies from being crushed or eaten by a giant foe is frightening and sad, but it's only a blip on the radar compared to seeing those monstrous beasties fall from the might of your tactics.

Pikmin 3 Deluxe is the long-awaited remaster of Pikmin 3 from the Wii U, which was released more than seven years ago now. Despite the age, Pikmin 3 Deluxe looks just as good as it always did, and there aren't many macro-scale strategy games I'd rather gaze at. But what's most important is that the Nintendo Switch release adds a bunch of new features and modes to the game, to make this version definitive by far.

You begin the game as a trio of space explorers searching the universe for new fruit and seeds to send back home - food shortages are ravaging their native planet, and searching for new food sources is the only way to ensure the survival of the species. They come across a brand new planet and before they can even touch down on the ground tragedy strikes, separating the crew and damaging their ship to the point of being unable to achieve intergalactic travel. It's a desperate situation, but luckily they come across small plant-insect hybrid creatures, Pikmin, and they use the critters to help them survive on an otherwise incredibly hostile planet. 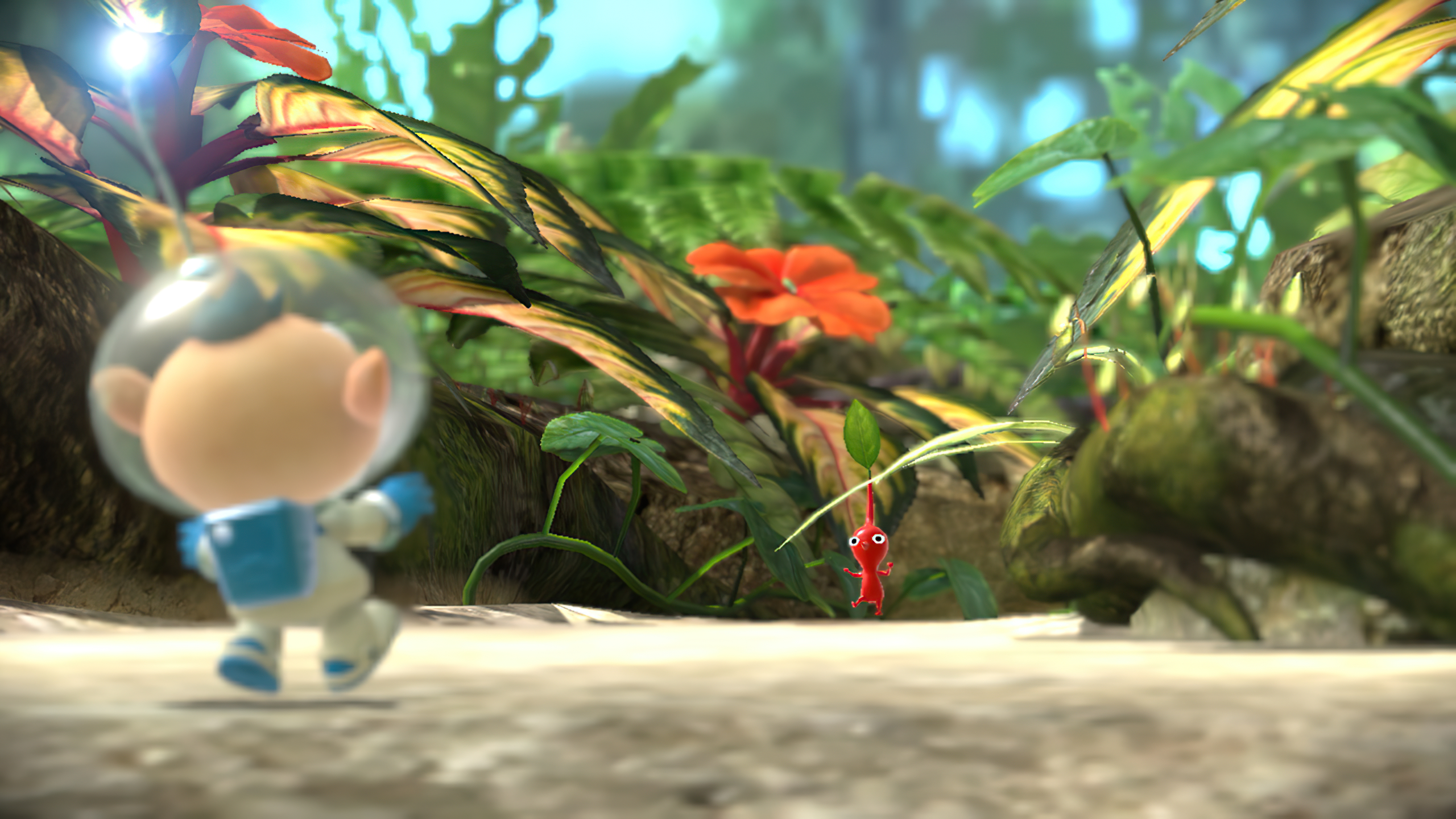 Pikmin are housed in the Onion, a strange spaceship that can absorb organic material and turn it into new Pikmin seeds to continue the survival of the species. As such you'll be taking your Pikmin and literally throwing them at plants, insects, and cruel carnivores, all in the hopes of killing them and turning their remains into food for the Pikmin, increasing your numbers. You can take up to 100 Pikmin onto the field, and while throwing Pikmin at enemies doesn't sound like what you do in a "thinking man's" strategy game, this is an action-strategy hybrid where choosing which Pikmin to throw, where you throw them, or perhaps having a whole type of Pikmin charge ahead are all valid strategic decisions, especially since any of those can also easily result in your army being crushed in seconds.

There are five types of Pikmin you can encounter in the main story of Pikmin 3 Deluxe, with another two types being available in the Mission modes. Blue Pikmin can survive in water, Red in fire, Yellow in electricity, Pink can fly, and Rock Pikmin can't be crushed and will land on enemies with a powerful thump. You'll be introduced to the Pikmin types one at a time, and you'll slowly explore more and more of each level available, all while collecting fruit to turn into juice, which is needed as rations in order to survive on the surface of the planet. Each stage is littered with gates and tasks, such as constructing a bridge, demolishing a wall, or breaking through a pane of glass. The different Pikmin types you add to your team fill out your ability to explore, and suddenly older stages will have brand new areas for you to delve into, and new beasts to challenge.

Pikmin 3 added a new layer of RTS-style systems to the mix. Three protagonists mean you can juggle three unique perspectives on the level, and the Wii U GamePad allowed you to dictate certain tasks to your team, such as moving to a select area with a small squad, so you can multitask and take down levels as quickly, or slowly, as you decide. The Nintendo Switch version of the game does lose out on this slightly - bringing up a map menu isn't quite as convenient or natural as glancing down at the GamePad - but what it loses in convenience, Pikmin 3 Deluxe makes up for with brand new features, such as full Story mode co-op play.

Co-op play makes Pikmin 3 a better game, and while I played plenty of Pikmin 3's Mission mode with friends when it originally released, I can now experience the full story mode with a friend, and that makes it a far more engaging and fun experience. You can even explore entirely separate areas of a level to your partner while playing in co-op, even in different load-zones. This technical trick might also be one of the reasons why Pikmin 3 Deluxe still runs at the same 720p resolution that the original did, and hasn't had an upgrade as we've seen in many Wii U ports. 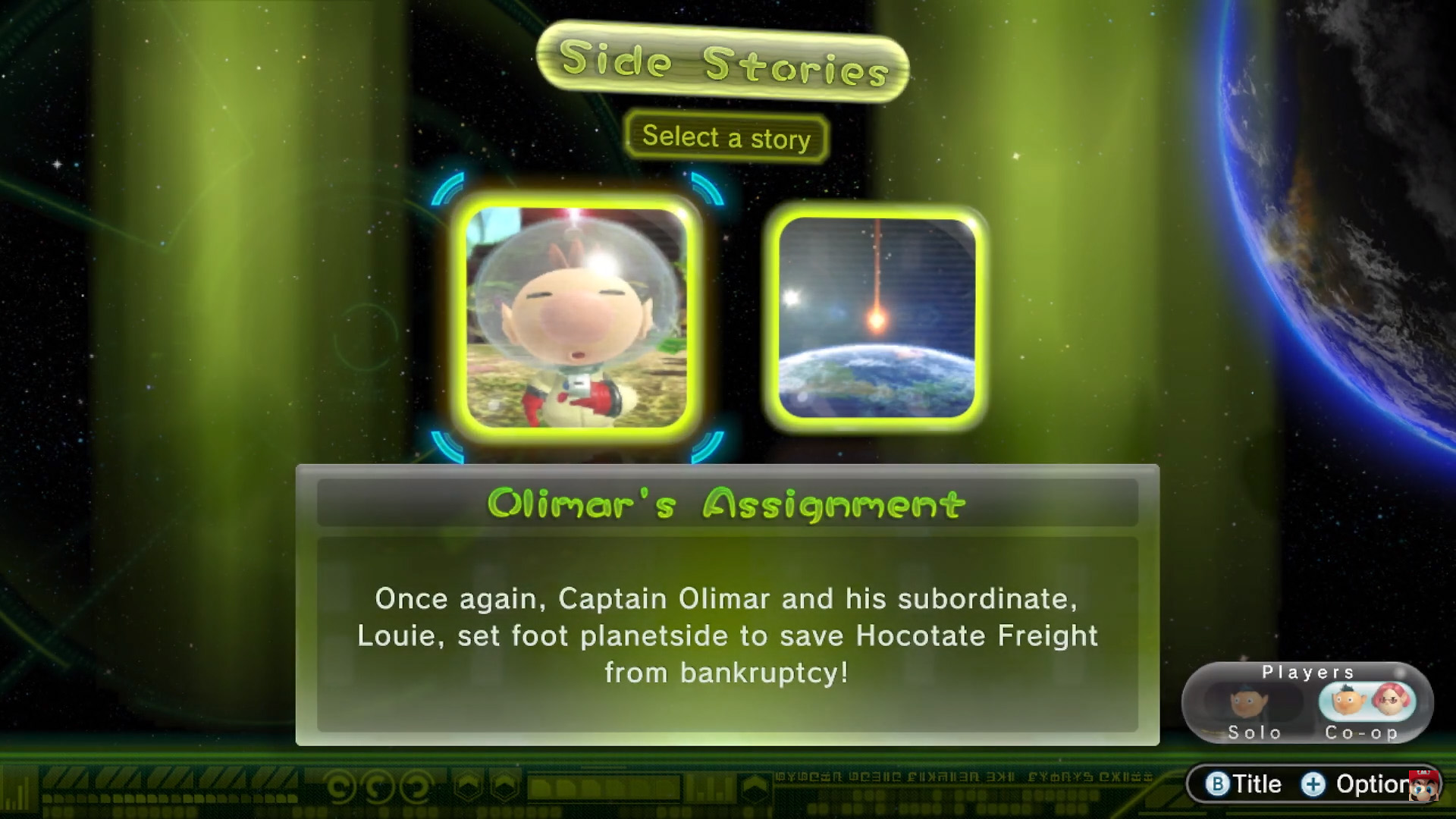 In addition to that, there's also full gyro-pointer controls, which are a bit of a double-edged sword. On the one hand, the Wii Remote pointer was always the fastest and most accurate way to aim and throw Pikmin when trying for the Platinum medals in co-op mode. On the other hand, while this gyro-pointer approximates that function, it's not quite as accurate. You'll find yourself tapping the R button very regularly to reset the default resting position of your gyro-pointer, but if you can overcome that frustration, you'll prefer this method of control to anything else. Still, unlike when I was using the Wii Remote regularly, I found myself using the lock-on functions as a crutch to help my aim with gyro-controls.

Another fun new addition to Pikmin 3 Deluxe is a set of side-stories that revolve around Captain Olimar, the original Pikmin protagonist. He has also crash-landed on the same planet as our primary explorers, and these new side-story missions involve Olimar exploring the existing environments and completing a few new tasks to collect items and defeat enemies. These don't stand out much, and frankly feel even less substantial than the DLC for the original game (which is now bundled in here) but they're a nice addition to bulk-up the content.

The new features definitely make Pikmin 3 Deluxe the best version of, quite possibly, the best Pikmin game, but it is a bit disappointing to not see this game enhanced in the same way we've seen of other Wii U titles. The resolution is still just 720p, and the new content is fairly underwhelming, it's just the excellent main game and new control options that give this game new life. Playing this in local co-op with a friend is a blast, as long as they understand the mechanics of Pikmin, and will give you hours of fun. It's entirely worthwhile to go for 100% completion in the story mode, and once that's done the Missions mode offers a few more hours of fun.

This is probably the best Pikmin game, and this is undoubtedly the best version of it. It's a bit of a shame that this isn't full-HD like many Wii U ports have been, but the quality of Pikmin 3 Deluxe is unmistakable. An excellent action-strategy adventure that'll tempt you into 100% completion, and probably leave you in tears when you see your Pikmin eaten at the end of a complicated day.