As more cell phone manufacturers opt to remove the 3.5mm headphone jack that’s been present ever since the 2.5mm line was rendered obsolete by a more uniform standard, Bluetooth devices have become more of a requirement. Let’s be honest, no one wants to wire in their headphones into a cumbersome dongle just to listen to whatever their daily motivation happens to be. Consumer audio has been a field that Philips has fit into for as long as I can remember and they’re now on their second rendition of in-ear Bluetooth earbuds with the Philips UpBeat SHB2505 Bluetooth Headphones.

Out of the box, the Philips UpBeat Bluetooth Headphones has a decent sound profile but lacked the punchy bass that I’ve enjoyed from other in-ear monitors while on my Samsung Galaxy S10+. During my usual chillout sessions of writing along to those lo-fi beats that dominate my YouTube rotation, I found the treble to be tweaked a little too high while the bass had a muddied layer beneath the rest of the music. Oh, how much of a difference just a quick check into the sound settings on the Galaxy to enable Dolby Atmos and Adapt sound makes. Even on the standard Equalizer, the clarity that should’ve been there to begin with shone through on the Philips UpBeats and instantly elevated their status as a worthy replacement for my Galaxy Buds. They still don’t quite have the skull-shaking bass that some may desire from their headphones, but when you’re working with 6mm drivers, some sacrifices need to be made for the form factor.

Stability is a feature that’s underestimated with a lot of consumer in-ear monitors on the market. The last thing anyone wants when hitting the treadmill is worrying about having an earbud fall out during their final sprint. Philips took a step I hadn’t seen in other consumer headphones and added in a small rubber wingtip to the top of each earbud that gently hooks behind the concha in the wearer’s ear. This little addition helps grip to the user’s ear and keeps the UpBeat headphones from falling out or even shifting in place while on the move.

Bluetooth 5.0 comes standard on the Philips UpBeat headphones, providing the double benefit of a more stable connection and decreased battery consumption. Thanks to the automatic pairing feature on these earbuds, after the initial sync on your device you’ll never have to worry about a messy pairing situation. Any time I wanted to head out to the gym and hit the leg press, I could take the earbuds out from their charging case and hit the power button on the right earbud to turn them on and go right into my music app of choice. The moment you open the lid and take the right earbud out, you’re greeted with a female voice notifying you that the right channel is connected, then the left, then finally that it’s connected and ready to play.

Because of the primary and secondary device system that Philips went with for their SHB2505 in-ear headphones, the right earbud is set up as the primary and must be turned on first before it will connect the left earbud. If you’re wanting to use just the left earbud, there’s an extra step to go through before these will operate as intended. Rather than a single Bluetooth device, each earbud paired independently on my Galaxy S10+, something I found out the hard way after wanting to use just the left earbud while leaving the right in the case. Pairing to a second device will require you to delete both earbuds from your known device list, as the automatic pairing will keep trying to reconnect to the original device (if you only use them on one phone, this extra step won’t apply).

For most users, the Philips UpBeat headphones will provide more than enough battery to last through a demanding gym session. The SHB2505’s boast an average battery life span that I found right around the three-hour mark, comparable to other in-ear headphones on the market. Couple that with a carrying case that can provide three full charges (an additional nine hours of power) and you’re looking at a set of headphones that can make it through the whole workday as long as you take breaks to charge back up.

The charging case for the Philips UpBeat headphones is one of the few aspects that I find lacking in a set of its price range. Every time the case is opened, there’s an audible click as the plastic and spring move back into position and I fear that the lid may one day snap off (nevermind my tendency to open and close the case when I’m waiting as a sort of nervous tick). Beyond this small annoyance, the carrying case for the Philips UpBeat is sturdy enough to leave in your pocket and go out for a run. The lid stays firmly in place without and wiggle or stress on the single hinge and the micro-USB port to charge is tucked away in a recess on the rear side that shouldn’t pick up any pocket lint while bouncing around in your pocket or gym bag.

The Philips UpBeat Bluetooth headphones are feature-rich and a fine addition to a gym kit, although this may not be instantly noticeable out of the box. With a quick equalizer setup, their status as a comfortable mid-range set of in-ear monitors is easily elevated. There are no extra features that could drive up the price on the SHB2505’s, so if you’re looking for a basic set of earbuds to take to the gym without worrying about them falling out of place, Philips should be one of your first choices. 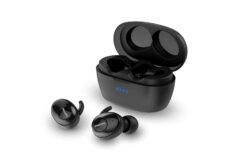 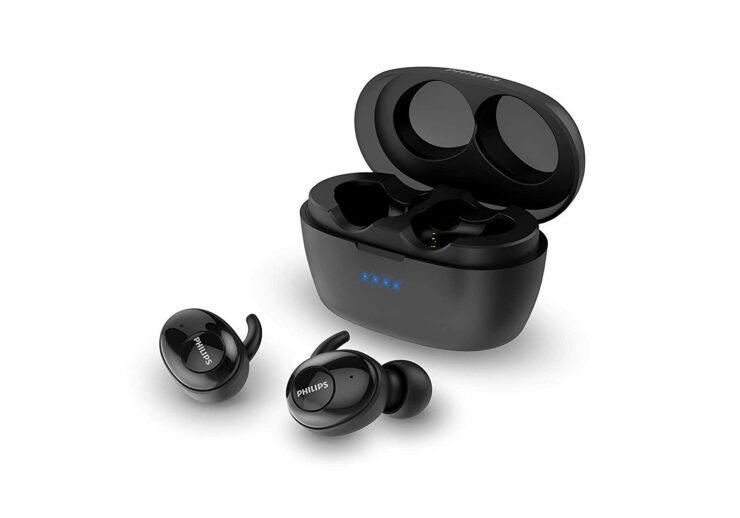 After some equalizer tweaking, the Philips UpBeat SHB2505 wireless earbuds can be a great companion when your gym playlist comes on.

Want a Smartphone That Will Also Store Your Wireless Earbuds? Xiaomi Might Be Working on Just That