Path of Exile Review [Xbox One] – Path to Excellence?

Path of Exile is a long-form loot grind, with a huge leveling system. It can feel a little too familiar at first, with the same basic combat loop you’ve played in a dozen other games. But after a while, after quite a while actually, the game takes on enough of its own personality. That, and it's free.

Having just been released on Xbox One this month I took a deep dive into the game, which had been doing reasonably well on PC since it released in 2013. It's marketed as a free-to-play game, with no pay-to-win mechanics, and that holds true on console as well. I put in a lot of hours in the game without ever feeling stuck or underpowered for any situation.

Full disclosure, after several hours with the game I did use a publisher provided code to boost a little and see some later game content. 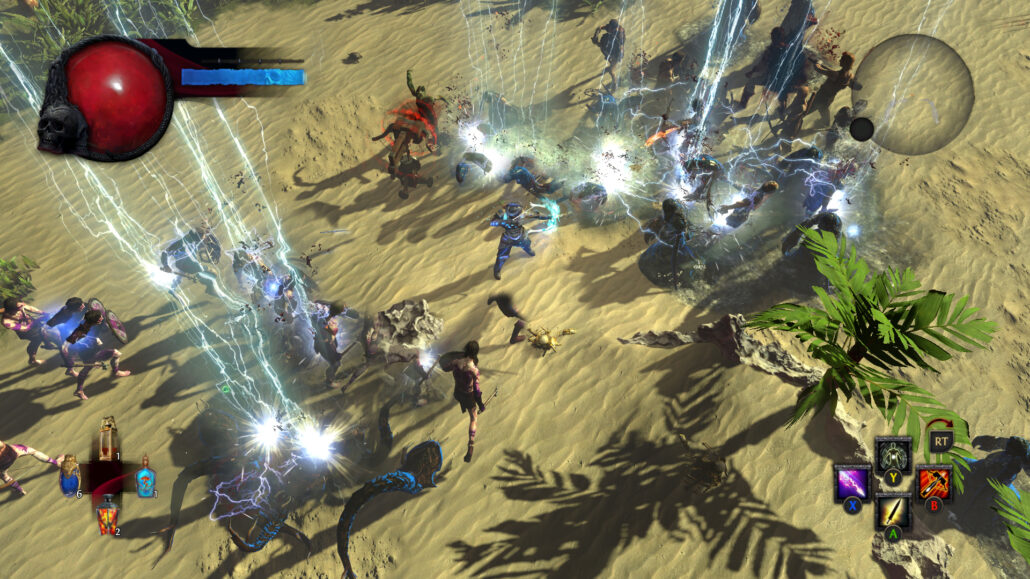 Unfortunately, with the release of Destiny 2, I can see this loot grinding fantasy adventure disappearing, as well as most games, at least for the next few months. While you won’t be playing in first person view, nor firing amusingly named firearms, you will spend a similar amount of time wandering the lands searching for better loot. All the standard classes are represented at the beginning of the game, from the magic user to the bow wielder and the dude in heavy armor. I played them all but spent most of my time with the witch class.

The early several hours of the game are exactly what you should expect. The game follows your journey through some miserable fantasy purgatory, complete with zombies and monsters. You’ll be given some standard quests to clear out areas, find loot or kill named beasties, and the combat is like every other top down loot grind. With a collection of skills and spells locked to each button, you manage mana, health and loot as you whittle away at the hordes before you. Sometimes your character misses which adds an unamusing level of frustration to the mix, but most of the time gameplay is pretty standard for the genre.

There seems to be a deep lore to the game as well, all nicely voiced and with considerable grit. You’re an exile, sent this dreary land as have several others. After that, it blurs with every other fantasy game with a lot of names that are impossible to remember. No, you don’t play Path of Exile to get swept away in an epic story. You play it for the grind.

Although the aforementioned combat loop might feel very familiar with you’ve played anything like it, from Diablo and Torchlight to older titles like Titan Quest, it's remarkably well made. Aside from the very beginning before you’ve had a chance to acquire some skill ‘gems’, there is something simple and pleasant with Path of Exile. It presents itself as this deeply complicated game where weapon and item descriptions take paragraphs to explain their various powers. And while I’m sure some players will enjoy making pixel perfect loadouts, it's easy enough to forget about that and just grab the best gear in simple terms and have a blast anyway.

That being said, the inventory system, a core part of the experience feels, like the random misses, purposely irritating. Weapons can, in theory, be equipped to either hand, although for reasons beyond my understanding, sometimes they can’t. My witch, for instance, wields dual wands because she’s awesome. But for whatever reason, the game sometimes doesn’t like her using particular wands in particular hands. Maybe there is some harder to understand mechanics, but I can’t work out what that is. On top of that, items equipping and unequipping items with gems attached seems more difficult, to the point where it can be easier to remove the gems, move the item as necessary, then reattach the gems. It makes what could be simple, seconds long dives into the inventory screen feel much longer. And on top of that, the inventory feels quite small forcing you to discard or drop a lot of items as you play. Journeys to and from the hubs with vendors aren’t frequent. 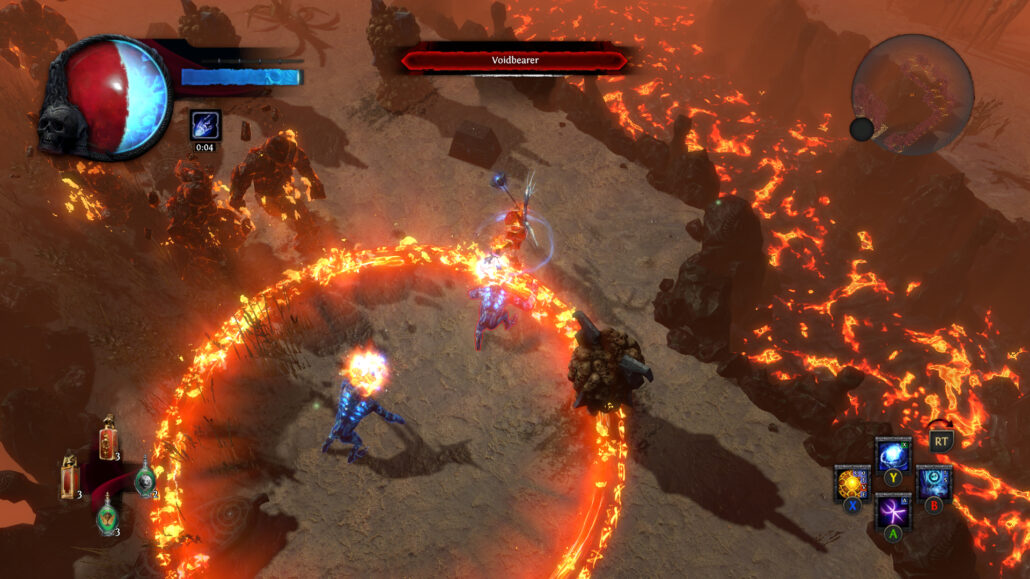 Later game play adds more exciting spells, equipment and weapons to do battle with. Although Path of Exile clearly wouldn’t have the same budget as the titanic Diablo, it is most noticeable in the graphics. While wizards in Diablo fire grandiose lasers that explode, witches in Path of Exile use much less visually exhilarating spells, even in the later game. But that doesn’t make it less enjoyable when your character is higher level and can see the hours you put into the game paying off.

Obviously, this is exactly the kind of game best enjoyed with a friend, when you can keep your idle hands busy while chatting away and cutting down unending throngs of demons. You know, normal friend stuff. It doesn’t add much more to the game, other than having someone to talk to, but it certainly enriches the experience.

Path of Exile comes recommended for a lot of reasons. While not exactly groundbreaking, nor particularly exciting to look at or listen, its gameplay is addicting, frequently gratifying, and as deep or as simple as you like it to be. It can be perfect to while away an hour or two or to sink into on a restless night. With friends it's fun, and by yourself, you can turn on a podcast or some music and enjoy your violent life in exile.

Reviewed on Xbox One (code provided by the publisher). You can buy the artbook and/or the graphic novel via Amazon.

Path of Exile is nothing truly new, but it is a well crafted and incredibly deep game in the loot grinding genre. Particularly recommended if you can play it with friends.