The world is headed towards a disastrous future, as humanity continues to deplete resources and continue living way beyond its means. To prevent complete annihilation, humanity built floating arks to bring forth a new era of prosperity under the control of a select few. Needless to say, this is the perfect recipe for disaster, as shown in the survival-horror game P.A.M.E.L.A.

P.A.M.E.L.A is set in one of these floating arks called Eden where select people have been relocated during the event known as the Exodus. As the situation on the surface was deemed unsalvageable,  clean energy company Bio-Stera saw no alternative but to abandon it completely and create the perfect human society through almost complete control of every facet of life. Overseeing the system was the AI PAMELA, who came to understand and care about humans in the years following its creation.

Things, however, did not go as planned. A mysterious disease broke out in Eden at some point, infecting most of the human population and effectively bringing down the utopia built by Bio-Stera. Not one to give up easily, PAMELA reawakens a Sleeper, and together, they set out to restore Eden to its former glory, curing the mysterious disease that turned its inhabitants crazy.

P.A.M.E.L.A's lore, story, and setting are definitely among the game's best suits. The world is very well realized, and the story of Eden very intriguing, despite dystopian settings having been done to death.  The story focus also serves gameplay well, as it prevents the game from feeling completely directionless, as survival games often can be.

P.A.M.E.L.A's great lore and world-building are supported by a first-person survival experience that generally works well, despite some issues that drag the experience down. After awakening from cryogenic sleep, the Sleeper will be guided by PAMELA towards different story objectives set all over Eden. Players, however, are not limited to a set path but can explore the city freely in search of weapons and materials that can be used to craft a variety of items, including armor pieces that grant bonuses once a set has been equipped and devices that can be used to create a base pretty much anywhere. Being a survival game, players will also have to keep an eye on hunger and thirst, something that thankfully doesn't get in the way too much.

Exploring Eden's bays is extremely engaging, thanks to the great map design, which is reminiscent of the first Dark Souls with its compact yet fully interconnected world, and the inclusion of a lot of collectibles, such as audio logs that delve deeper into PAMELA's back story. Unfortunately, there are a few issues that do get annoying over time. Combat, in particular, is quite mediocre: ammo for any weapon is limited, so you will mostly fight infected and droids with your bare hands. Problem is that combat is extremely clunky, so it's very easy to miss a punch and get overwhelmed by the enemy's counterattacks. The AI also doesn't help at all, since enemies either gang up on you making encounters against multiple enemies almost impossible to win or completely ignore you, preferring to walk into a corner or get stuck behind objects. The fact that it's also easy to avoid enemies altogether makes combat feel superfluous, rendering the variety of play styles made possible by the many armor pieces, weapons, and abilities, unlocked after each respawn if enough Genome Points have been obtained, almost pointless.

It's a shame that combat is so mediocre, as all the other P.A.M.E.L.A gameplay systems work rather nicely. Crafting is extremely well-developed, allowing players to create a variety of items that aid the player both during exploration and in combat, hacking adds a little spice to exploration, tasking players with completing two different types of mini-games to unlock doors, lockers and so on, and power management mechanics bring a sense of urgency that works great with the setting. The game also features some sort of faction system that will often make the different groups of enemies fight one another, so it is not unlikely that you will often find the infected fight against security droids as you move from one area to another.

Featuring so many complex gameplay systems, P.A.M.E.L.A is undoubtedly not a game for newcomers to the genre. While there are a few settings that can make the experience easier, such as a couple of difficulty sliders that reduce enemy health and attack power, and the ability to turn-off permadeath, P.A.M.E.L.A doesn't do much else to be more accessible. There are a few generic tutorials that introduce the game's mechanics, but players are mostly left on their own as soon as the game starts. The almost complete absence of hand-holding will be welcomed by veterans, but newcomers will end up feeling a little lost in the first few hours.

P.A.M.E.L.A's great story and world-building are enhanced by the excellent world design and clever use of lighting, but the whole experience is damaged by a slew of technical issues that are extremely annoying. The game is poorly optimized, so there is no way to make it run decently at resolutions higher than 1080p on machines that do not exceed the recommended specs. The machine used for the test, featuring an i7 3770 CPU, GTA 980 Ti GPU and 16 GB RAM did not manage to run the game at a steady 60 FPS even at 1080p resolution. The game's uneven performance is also due to memory leak issues that tank it after the game has been running for around 30 minutes. There's are also issues with V-Sync when running the game on an NVIDIA GPU that requires the users to turn it off in-game and activate it through the NVIDIA Control Panel. All these issues are rather baffling, considering P.A.M.E.L.A has been in development for a long time and it is no longer in Early Access. A few more months in the oven would probably have helped to make the experience much smoother than it currently is.

Everything considered, there are quite a few things that P.A.M.E.L.A does right, but some of the gameplay and technical issues prevent it from being a must-have for all survival games fans. It is, no doubt, a competent survival game featuring a great story, lore, and world-building, but the ultimate enjoyment of the whole experience will depend on the player's tolerance for bad combat, broken enemy AI and the many technical issues. 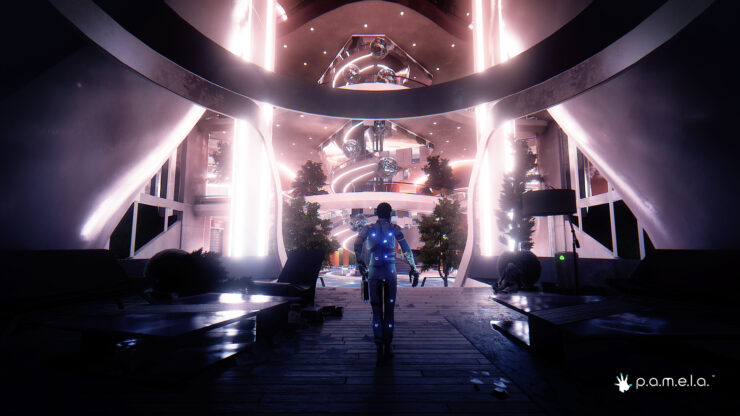 With its excellent world-building and intriguing story, P.A.M.E.L.A could have been a great survival game, but it sadly fails to reach the must-have status due to a variety of issues. The game can still be an enjoyable experience, but how much really depends on the player's tolerance for mediocre combat, bad enemy AI and the many technical issues.