Today we've got decent mid-ranger for review powered by an 8nm Qualcomm processor. While most of you should be familiar only with the Snapdragon 855, Qualcomm's been busy customizing its silicon for emerging markets. One such customization is the Snapdragon 730G, which powers the Oppo Reno2. However, there's a lot more to the Reno2 than its processor.

We were provided a unit of the device before its launch for an early look. Safe to say, like every other gadget out there, the Reno2 has its strengths and weaknesses. The strengths include an excellent design and a great processor; the weaknesses, a display that could be improved and an unimpressive frame.

Right off the bat, the Oppo Reno2 has a beautiful design. The smartphone's back is made of glass, but this doesn't have your run-off-the-mill finish. Instead, the corners of the glass back and the borders of the oval space surrounding the Oppo logo reflect blue light when the device is held at certain angles. In fact, the whole back will glow a dark blue if you hold the device at the right angles.

This is a one-of-a-kind look and sets the Reno2 apart from its competitors within the same price bracket and even gadgets present in the flagship category. However, Oppo's tried to make this device appear thinner than it actually is by curving the back panel over the aluminum frame. This is also done to improve the user's grip on the device, especially as gadgets with a glass finish are slippery to hold. Safe to say, the approach works and the Reno2's frame looks thinner than it actually is too.

Another great design feature of the Reno2 is its rear camera setup. This setup, despite housing four sensors, is flush with the device's back. Our estimates suggest that Oppo has used five and four lens elements in this setup; the iPhone, in comparison, uses six and five lens elements. However, either Oppo's compromised the device's thickness to ensure this flushness, or the company's worked up some magic under the device's hood.

Since we weren't allowed to take apart our unit, we're forced to go with the former. Additionally, it's also possible that the lens elements used in the Reno2's rear camera setup are thinner than those found on devices that have their camera setup protruding. 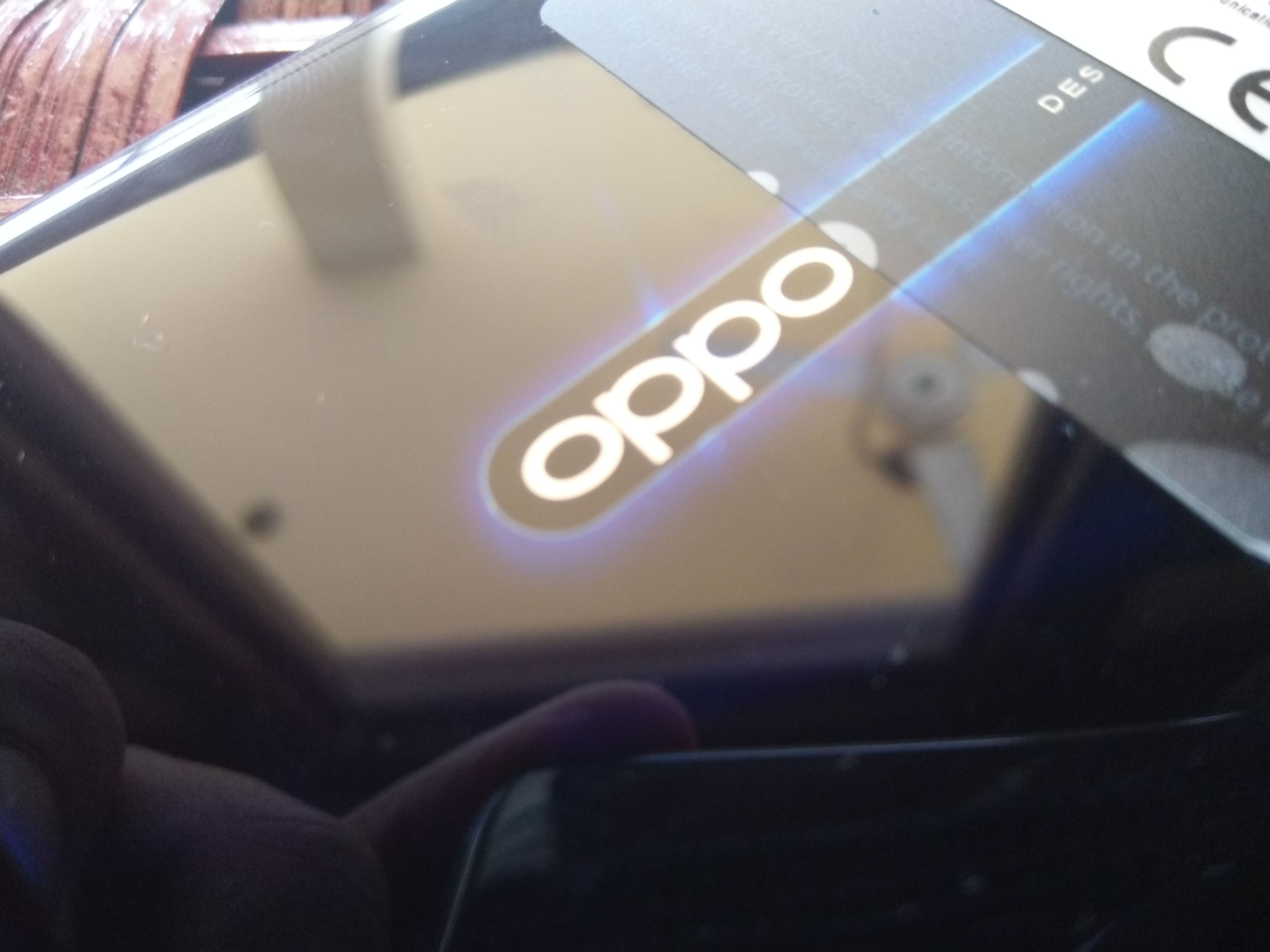 The blue effect is the most beautiful thing you'll see on a device.

The device's curved glass back ensures a steady grip, and without a case, the Reno2 is comfortable to hold. However with the case that's provided inside the retail box, the gadget feels very bulky; but hey, you're gonna have to compromise sleekness for safety if you want to. At the top of the phone is its defining feature, the shark fin front camera. This is the Reno lineup's trademark feature, and its presence on the Reno2 sets the device apart. The shark fin camera present on the Reno 10x Zoom uses a stepper motor with a 7-tooth cog to push the device's front camera and minimize noise when running.

The Reno2's front camera pops up soundlessly and gives the device a futuristic look. Kudos to Oppo for thinking out of the box. Speaking of which, another small yet unique feature on the device is a small nub at its back, placed below the quad-camera setup. This ensures that the pristine glass back does not come into contact with the surface that the Reno2 is resting on; ensuring that your device isn't scratched.

Finally, the device's power button is placed at the right and its volume buttons are placed on the left. At the bottom an unimpressive speaker grille, a 3.5mm earphone jack and a USB-C 2.0 port are present.

Our review unit features 8GB of RAM, and as a result, the Oppo Reno2 did not lag in running any application despite more than ten others running in the background. Moving towards benchmarks, let's start from Antutu. We ran Antutu five times on our device and calculated an aggregate value to reduce any one-off discrepancy in the scores.

The Oppo Reno2 has a 213,519 aggregate Antutu score. Aggregate values for individual components can be seen in the table below. Keep in mind that we ran the benchmark on the device without giving the Reno2  time to cool off. This was done to assess how operating temperatures affect the gadget's performance. Single and multi-core test scores for GeekBench 5 are also shown above.

Now, let's talk about the graphics. The Oppo Reno2 is powered by Qualcomm's Adreno 618 GPU. We've tested this GPU by running both GFXBench's various tests and 3D Mark's Slingshot Extreme. Just like with Antutu and GeekBench, we ran each test five times, but GFXBench's performance didn't vary sufficiently for us to calculate an average. Therefore, while the scores are aggregated for Slingshot Extreme, for GFXBench, they belong only to a single run.

Since we're talking about graphics, we'll only take a look at 3DMark's Graphics component for the time being. If this confuses you, then keep in mind that the 'Physics' component tests CPU performance only. In OpenGL ES 3.1, the Reno2 scores 2232 points and in Vulkan the device scores 2145 points. These are decent for a device in this category, but aren't particularly impressive either as a mid-range microarchitecture on the Snapdragon 730G is optimized to run applications efficiently, even if the performance takes a hit.

In GFXBench, we've taken results for Vulkan and Open GL in four different Aztec Ruin runs. Additionally, we've also taken a look at T-Rex, Manhattan and Car Chase. Once again, the smartphone demonstrates performance that's better than your standard mid-ranger but below what you'd expect from a flagship.

Finally, we also subjected the Reno2's CPU to extreme workloads to test when and how it throttles. Under a 100 thread workload that ran for 35 minutes, the Snapdragon 730G was throttled to 83%. Multiple runs confirmed that the processor's two high-performance cores throttle down to one-sixth of their peak frequency at the 20 and 24 minute marks. Additionally, thermal management doesn't ensure equal temperatures at 100% performance across all of the Snapdragon 730G's cores. Two of the six high-performance cores run cooler than the rest, as you can see below.

The Oppo Reno2 features a 2400x1080  6.5-inch AMOLED display. The display is perhaps the weakest point of an excellently designed smartphone. It isn't easy to view under bright outdoor conditions. The panel supports HDR and the Wide Color Gamut and has 800 nit peak display brightness. This brightness isn't sufficient to use the device in full daylight, and it's an area where Oppo has to improve in the future. Apart from the brightness problem, the display is sufficiently vibrant to make for good viewing.

To conclude, the Oppo Reno2 is a mid-ranger with a design all set to take on the heavyweights. The device's twilight mist finish lends it a unique look; a look that's complicated by a beautiful shark fin camera. Unfortunately, we were unable to conduct a rear camera review of the device since we had it only for a short time period. However, the brief toying around that we did manage didn't impress but it didn't disappoint either. The front camera, in particular, focuses too much on beautification, so you'd love it if that's your style.

The Snapdragon 730G is a great chip and should prove sufficient for the needs of most users. Battery life on the Reno2 is solid; its 4000mAh pack lasts around 8 hours of video playback over the internet. However, like most Androids, the bottom quarter-half of the screen won't let you swipe either left or right - so a full-screen display doesn't offer similar functionality all around. Finally, the Reno2 also features an optical fingerprint sensor built in its display. This sensor didn't fail us even once during our testing - but we didn't have the time to validate its security. A cool feature on the smartphone is that this fingerprint sensor automatically lights up as soon as you slightly move your device.

Disclaimer: Wccftech has not received any comission for this review and the device we received was loaned out to us.

A great design and processor, but disappointing display performance.