The PC chassis is often the most overlooked in terms of a new setup, but is one of my most favorite aspects of building a brand new computer. High-end chassis are incredibly broad and varied, and sometimes there is a sea of features that can become confusing for people who are looking into liquid cooling and what not. The NZXT Phantom 820 is everything that anyone would ever really want at $249.99. It comes with a sleek design and is a dream for air/liquid cooling fanbases worldwide.

The Phantom 820 is engineered to chill even the most demanding systems, equipped with triple 200mm and a 140mm fans. Maximize the potential by mounting up to nine fans to achieve unrivalled airflow in your chassis. Push the envelope and utilize liquid cooling systems that feature a push-pull configuration with top 280/360mm and bottom 240/280mm radiators up to 60mm thickness for unmatched performance. In addition, a rugged base design lifts the enclosure above the ground for display and increased airflow. The Phantom is reinvented again by following it's legacy of remarkable asymmetrical and award winning design.

• Fully equipped with one 140mm and three 200mm fans for the high airflow and low noise
• Integrated HUE lighting for illuminating the exterior/interior of your enclosure
• High-end water cooling solutions: 90mm of internal top space with top 280/360mm and bottom 240/280mm radiator support
• State-of-the-art integrated 4 channel digital fan controller with 15 watts per channel and LED indicators
• Easily removable filters located in the top, front, side, and bottom
• Adjustable interior pivot 120/140mm fan slot for directional airflow
• Removable HDD cage and large storage capacity for 6 hard drives
• Dual USB 3.0, quad USB 2.0, microphone, and audio jack along with a SD media card reader for high-speed data transfer and quick access to multimedia
• Unrivalled Cooling Capacity to mount up to nine fans for a maximum airflow
• Rear I/O white light for visibility in dark environments with a toggle switch
• Extruded right side panel for an elegant look and achieves 36mm clearance for cable wire management
• Equipped with a stylish pedestal that lifts your enclosure off the ground for increased airflow.

The NZXT Phantom specifications are listed below: 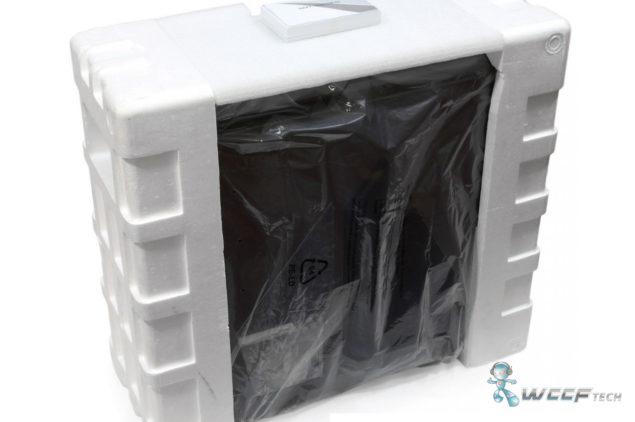 The Ultra Tower case is an amalgam of plastic and steel which comes in at 235mm (W) x 650mm (L) x 612mm (Depth) at around 15kg/32lbs upon unpacking. It is heavy when you first take it out and the very thought of anyone can possibly be along the lines of “what in the world did I get myself into.” Then it starts to become clearer: this is a case that delivers for everyone. It has the compatibility by supports form factors from mini-ITX to 9 expansion slotted E-ATX. The case itself comes with 3 huge 200 mm fans (front, side, top) and one 140mm fan (rear) for high airflow with next to no noise.

The case itself can accommodate tons of fans more from two to the top, and two in the front and back all using the 15-watt digital fan molex controller. I’m personally not the biggest fan of a molex connecter and am hoping something gets invented in the near future where we can do away with molex altogether without feeding off of our power supply but who knows. 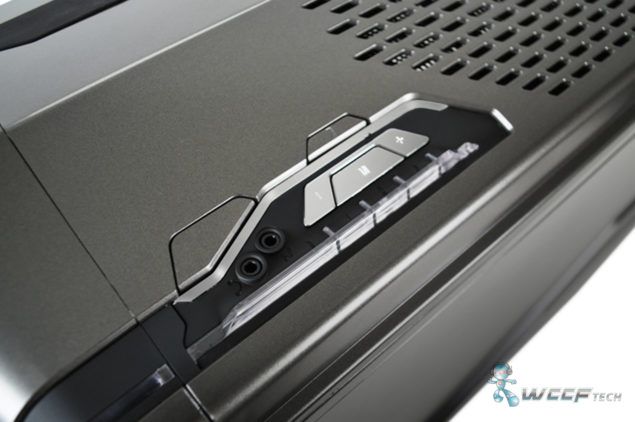 There are nine expansion bays built into the case itself ready for quad-SLI usage followed with four 5.25-inch and six 3.5-inch drive bays for the SSD/HDD combination lovers out there all with a screwless design. The 3.5-inch bay is located below the 5.25-inch bay and is angled at 90 degrees from the side panel opposite the main panel. This is something which adds to the real estate of the case itself and is more than appreciated in terms of cable management. Cable management is something that NZXT took very seriously by including 9 plastic-lined cable-management clearance bays of 34mm around the case from which you can make the inside look super-neat. I have always been the type of PC builder who always had wires inside the case and did not care much for cleanliness, but the included addition of clearance bays really inspires someone to make this case combination with their PC the best that it can look. 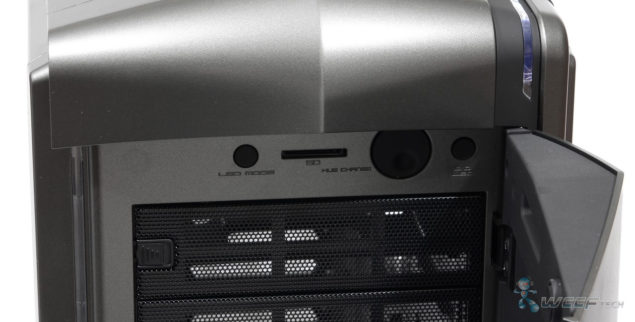 The LED itself is controlled with the LED mode at the front of the panel.  The LED mode is essentially in structure of the following: 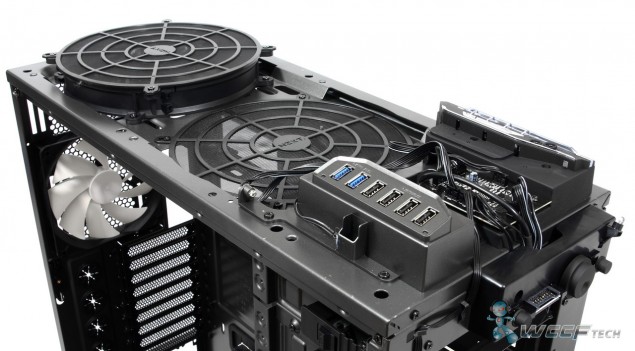 The top of the chassis can also pop off to reveal the USB connectors (2 of which are 3.0 USB connectors) 1 included 200 mm fan and room for one more fan with a filter bottom base. The fan controller hub is wired quite nicely and the USB 3.0 USBs are using the same controller powered hub connector as can be seen along with the LED HUE lighting which illuminates the interior and exterior of the enclosure. The colors available are: red, pink, purple, cyan, orange, white, blue, dark blue, green, and lime. I loved this aspect of the casing and this is something I found truly remarkable even if simple LED strips can also house these things.

Next to the slot is a SD card reader which I felt was a tack-on. While it is nice, it is essentially not needed since cheaper USB readers are readily available from camera manufacturers that could have brought the price of this down by at least $40 (to $200 even). The hue control is easily adjustable but I feel the little indentation where you put your finger and rotate is a little awkward. Perhaps it would have been better for NZXT to include some sort of a knob that is protruded rather than an indentation that is inside, as I doubt this would increase any forefront bulk in the front of the case. 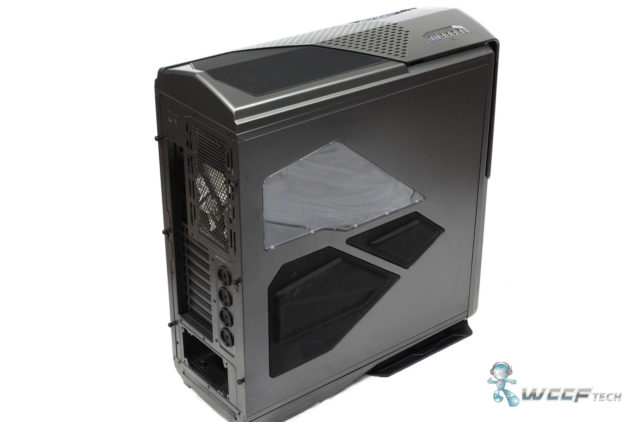 The side panel comes with an acrylic glass – something which during my review seemed really beat up and scratched. Now NZXT assured me this was in no way common to their actual production flaws, but something that is possible to happen. I ended up also reviewing their warranty service which asked for a receipt of where I bought it (in my case the amount I paid to review the case since it was backordered) and then I was sent a brand new side panel for my case right away via Fed-Ex. I managed to pop off the tabs of the glass acrylic panel and told NZXT Customer Support to only send me the glass, but they replaced the entire side of my case! This is truthfully some of the best customer service one can put their confidence in. 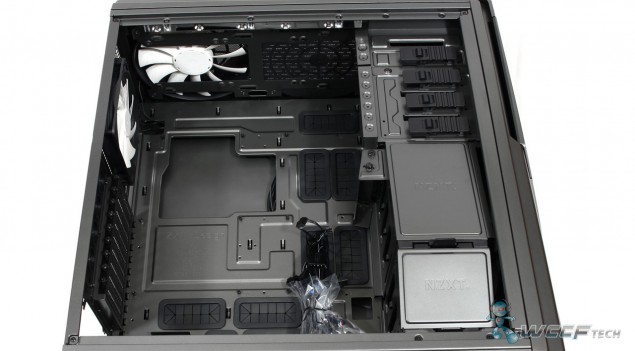 The interior of the case sports the cabling that includes 12 fan leads, SD cable, two power cables, a USB 2.0 cable, HD Audio cable, front panel switch/LED cable for the HDD, USB 3.0 cable, and a USB 8 pin extension cord. In order to setup the fans, you simply have to attach the fans to each of the channels (allowing 3 fans per channel in essence allows 9 fans total overall in this case). The CPU cooler can also be connected to control the fanspeed from the top, but considering we had it all rigged to the ASUS Maximus VI Extreme OC panel, this can automatically be controlled through the motherboard I/O itself. 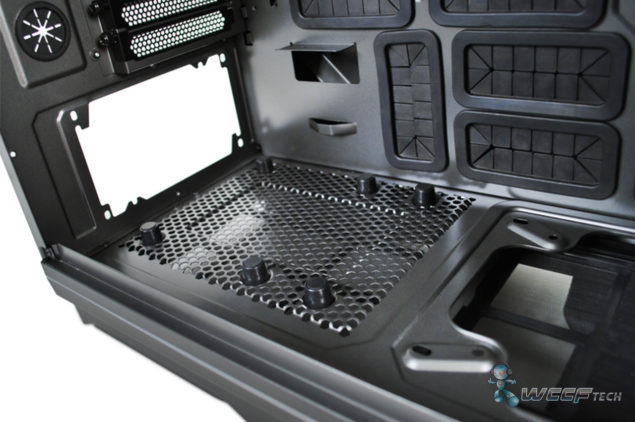 Setting up hardware inside of the case was simply a breeze. The space was ample and even though cable management is always an irritation at best, the NZXT Phantom 820 case made it super quick and easy. In terms of a PSU, you can easily fit a 1500W PSU in there with a shocking amount of cable room. And in case you don't use another bottom-mounted 120mm fan, you can just put excess cables in there. Not the best tactic but one I personally use. In the system one can go up to Quad-SLI and still have plenty of room left over for cooling and what not. The real test comes in temperature testing the rig, which is sort of like our benchmark for cases. In the past, I have had many cases simply shut down with no cooling – and this is usually a good measure of how roomy the case is using a system that is cluttered and putting out a lot of heat with the case open. 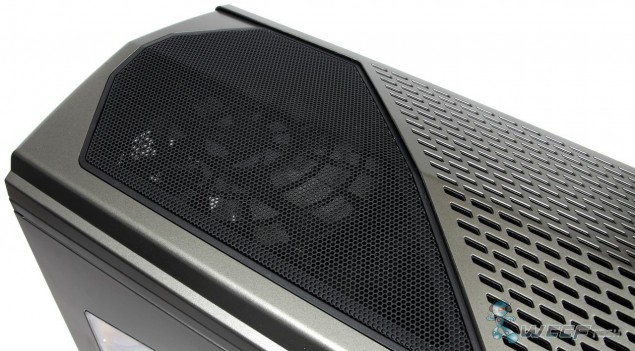 The NZXT Phantom 820 is simply a beast of a computer case. The ambient temperatures with the fans completely off for our benchmarking on this case proves that roominess is all here in the NZXT Phantom 820. The sleek housing design and the color work is perfect while the actual LED HUE lighting system is simply to die for with the controller wheel. With 9 expansion slots, and 9 fan possibilities for three different channels (top, rear, side) the NZXT Phantom 820 truly accomplishes quite a lot in the simple breadth of its upbringing. The weight is heavy and the size is enormous as I had to move my table out of the way to fit this case, but this is to be expected when you are talking about more room where PC parts have come to a point of an oversized standstill. Very few computer cases cater to liquid cooling fans and if you are going into that department, then this will very well be your case of the year. If you are a fan of airflow, then look no further. And if you are a lover of things that simply work with an elegance of sophistication and good quality then look no further –the NZXT Phantom 820 is here to stay.