The first Nioh was a strange anomaly in the gaming world. This Team Ninja-developed samurai sim was in development for more than a decade across two PlayStation platforms before it finally graced the PlayStation 4 with William of London's adventures in feudal Japan. This delicate balance of swordplay and Dark Souls formulaic design to combat wove together to create a gaming tapestry unlike any other. It wasn't until E3 2018 that a follow-up was announced and now, a mere three years since the first Nioh arrived on PlayStation 4, its successor has finally arrived: Nioh 2.

Despite its numbering as a sequel, Nioh 2 is actually a prequel and mostly unrelated to its predecessor when it comes to the story. While the first game centered around a Westerner named William supporting the Ieyasu's rise to power, Nioh 2 instead centers around one of the most influential men of the period: Oda Nobunaga. 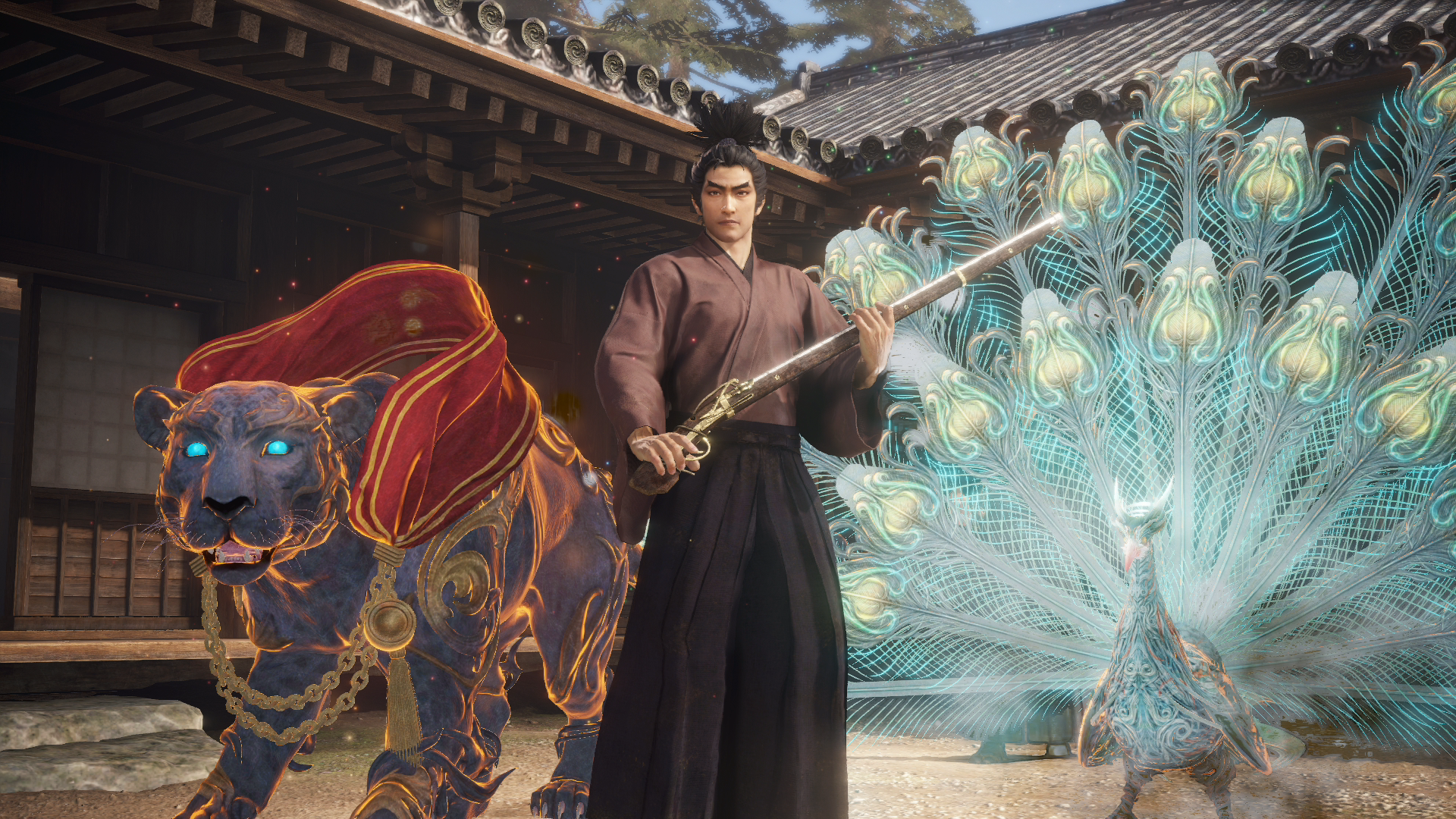 The tale of Nioh 2 is told primarily from the perspective of the player, known as Hiddy according to his constant travelling companion, Tokichiro. Together (well, mostly the player since Tokichiro's off doing his own thing and gathering up spirit stones), they enter the service of Oda Nobunaga following the Battle of Okehazama. Upon sieging Inabayama Castle, the two of them are granted the right to become true samurai and share a single name: Hideyoshi. If you're much of a Sengoku history buff, you'll recognize the various stages in Nioh 2 as being based upon real battles and can make some logical guesses as to how the story will play out.

What wasn't a part of historical record were the amount of yokai and supernatural forces at play during the Sengoku period. Nioh 2's protagonist is a rare breed of half-yokai, able to use their powers far more effectively than even William could in the first Nioh. Guardian Spirits, attained by supporting those who are blessed with an unseen guardian force, are still the core of character customization in Nioh 2. Players can equip two of these Guardian Spirits at a time, a feature that was only patched into Nioh much later on, with the second conferring a small passive bonus depending on type. Which ever Guardian Spirit you imbue Hiddy with turns him into one of three classes of Yokai: Brute, Feral or Phantom. These change Hiddy's ability to perform a Burst Counter to strike back against a new type of enemy attack, one that has a bright red flash and obvious tell but hits the player with an insane amount of damage if it connects. 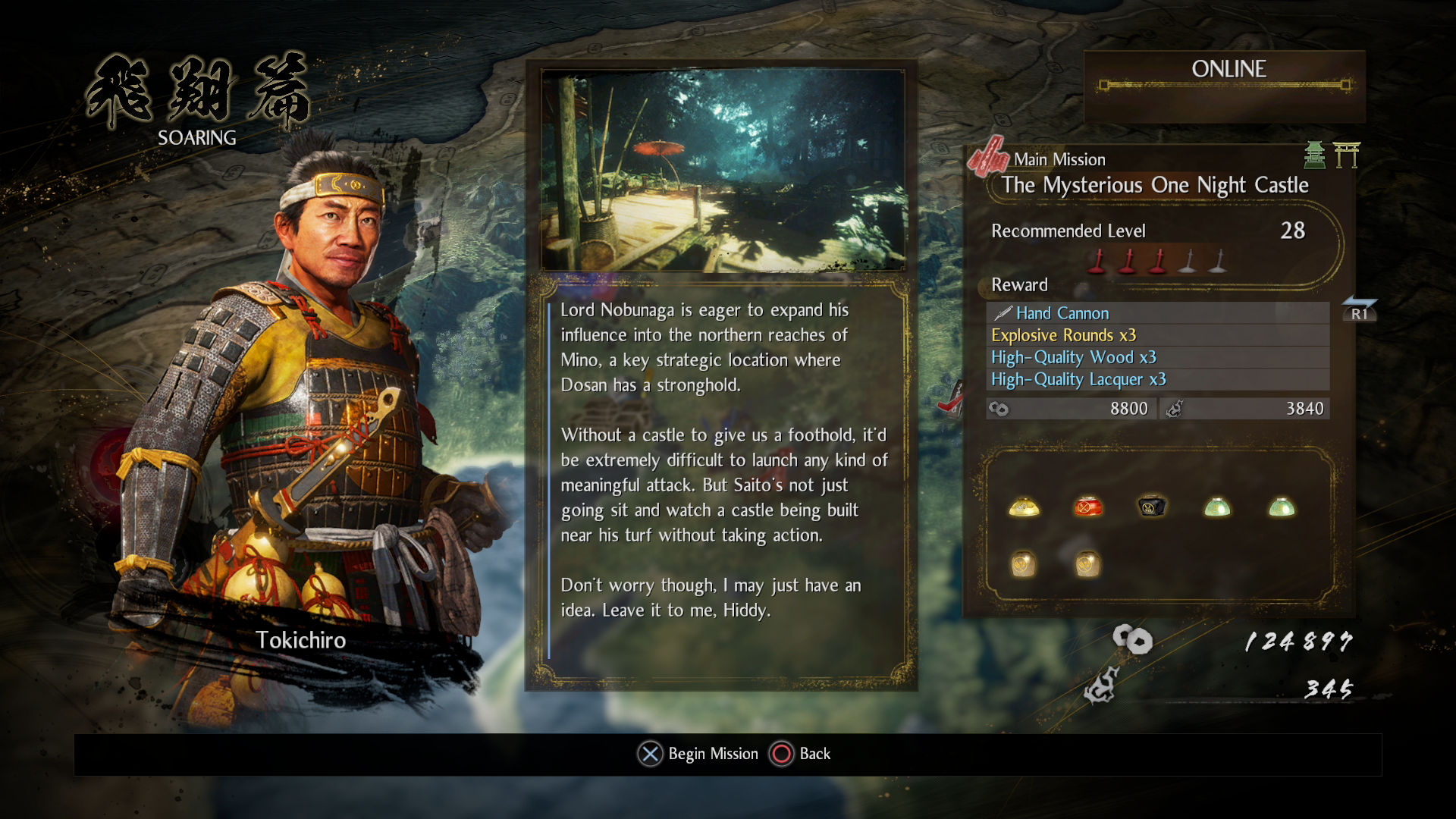 The other crucial new feature to Nioh 2 stems from the player's yokai pedigree. Upon felling the supernatural foes you encounter on the field of battle, they have a chance of dropping their soul core. These can be fused together with your Guardian Spirit to give Hiddy additional moves in combat that stem from the original yokai these cores came from. Skeleton Warriors serve as a pair of gunner support, hulking oni smash everything in their path, and more. These abilities run off a new resource in Nioh 2 known as Anima that's accumulated in various ways (typically dictated by your chosen Guardian Spirit), utilizing the same resource as the new Burst Counter. As these moves don't consume stamina, they're a great way to augment your combo strings when pressing the advantage or stepping back to catch a breath.

Stamina still plays a critical role in Nioh 2 just as it did in the first game. The speed at which it dissipates is what fuels the sense of urgency on the battlefield far more than any Souls game ever could. Changing stances or activating a Ki Pulse at the right time still recovers a significant chunk of expended stamina, so learning to pull a punch and hit R1 is often far more important than trying to bring up your guard. Blocking still renders you immune to damage but the stamina toll feels like a stronger hit this time around than in the previous game. Nioh 2 puts me into a zen state that no other Souls-like, save for Sekiro, could achieve. When the flow of combat and ki pulsing kick in, enemies can go down with no trouble. At the same time, when I run out of stamina and catch an oni boot to the face, moments like these remind me that it was my own fault and it's Team Ninja's way of telling me to get good. 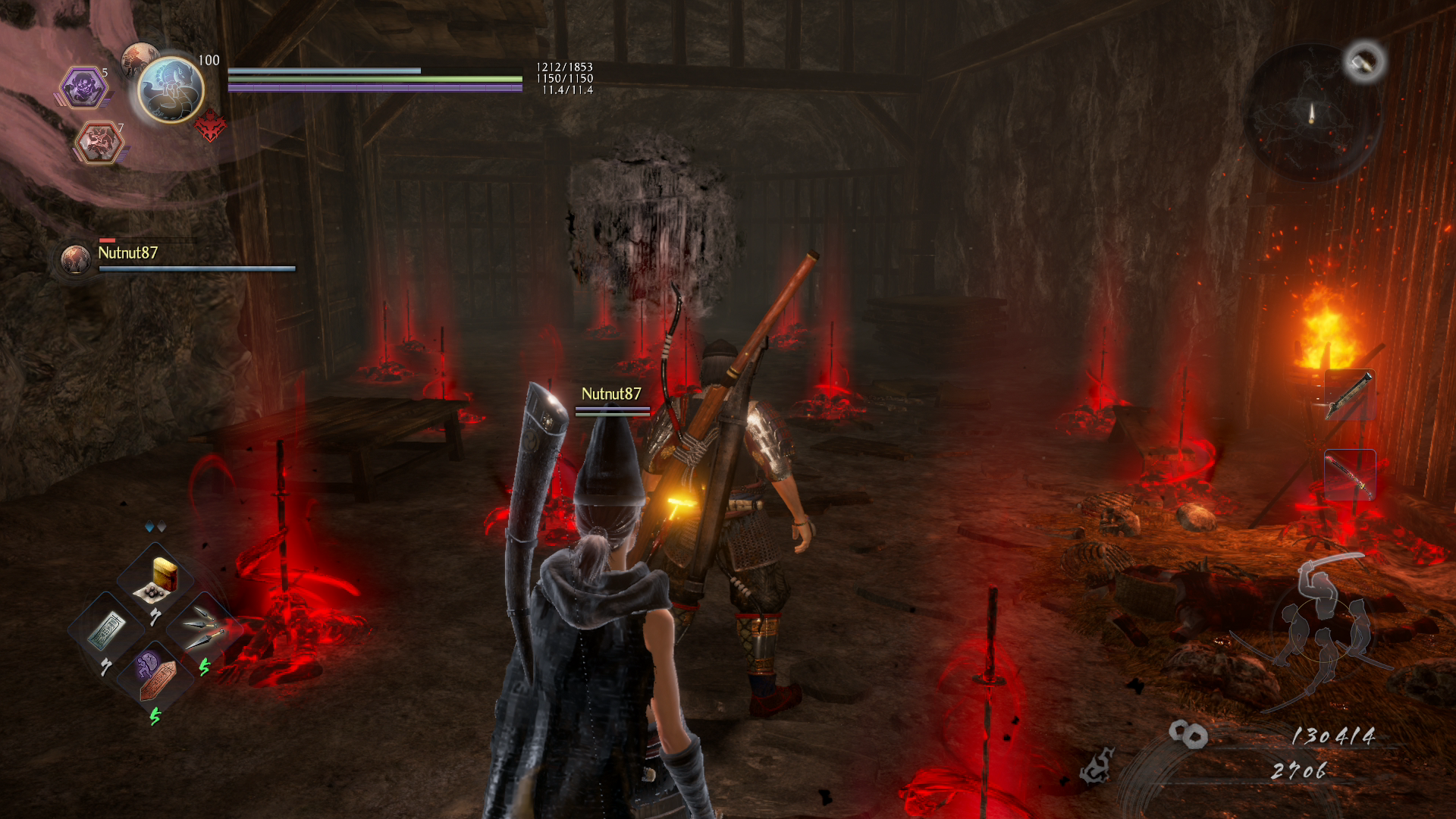 Nioh 2's campaign is still broken up into individual levels as the first game was, bringing you back to a world map after each level. While the interconnected world of a Souls game is missed, I still really enjoyed the level design that Team Ninja prepared in Nioh 2. Each level has a critical path that routinely loops back upon itself, unlocking new shortcuts back to the shrine where players can rest and level up, respawning enemies in the process. Even on a solid run without deaths, most levels sit around the 20-30 minute mark and routinely end with a big boss fight that cap things off nicely. Levels are frequently reused and slightly remixed for side missions, so if you really liked the layout of one castle siege, chances are you'll revisit it at least one more time when trying to clear every mission in Nioh 2.

It's safe to call Nioh 2 iterative, in the nicest way possible. They've built up a formula from the first title that carries over into the new title, and if it isn't broken, why fix it? Weapons largely handle similarly to the first Nioh with the usual assortment of balancing changes thrown into the mix, but I could still pull off a lot of combos with katana and odachi that were my bread and butter for the past three years. Other key features like the blacksmith's crafting system or the hidden teahouse's clan battles still offer the same global power struggle (you could pick a winning clan and constantly reap rewards, or pick a clan that offers a passive bonus that compliments your weapon style). 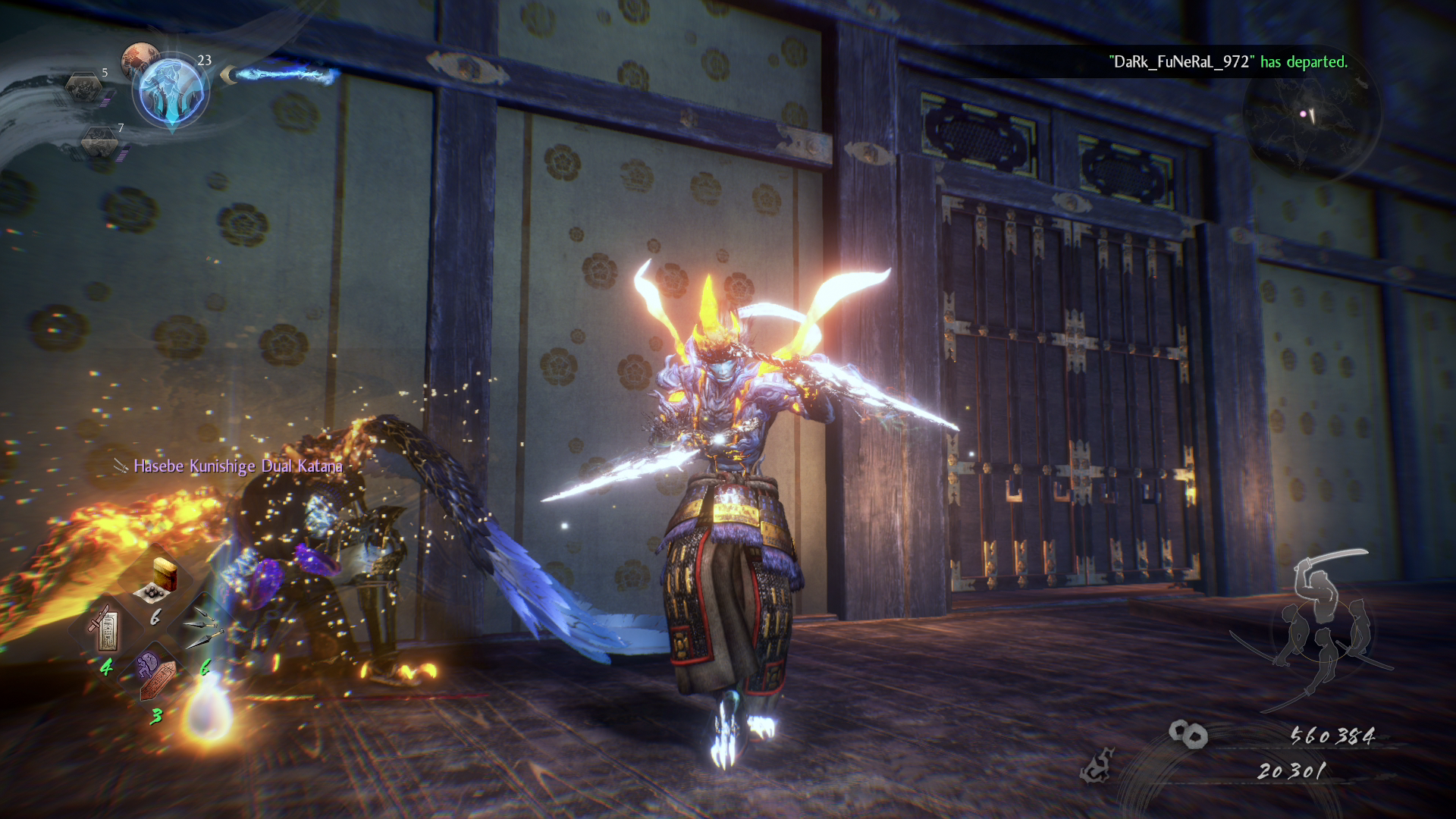 Nioh 2 still offers multiplayer connectivity, a feature that I'm quite grateful for. Players can drop a benevolent grave in up to three missions at a time and these blue markers can summon AI versions of the character to aid you in combat. Red graves, on the other hand, mark a player's death and can summon revenants; these red phantoms want nothing more than the player's blood but felling them will usually reward the player with a weaker version of their equipment loadout.

The true multiplayer of Nioh 2 comes by way of offering up sake cups at the shrine in each level and summoning in a live player. Players seeking to be the helping party can either select an individual mission to offer their aid in or seek out a random encounter out of any mission they've previously completed. The downside to seeking out aid in this way is no different from a Souls-like: once the helper is defeated in battle, they're instantly teleported out of the level. There's a new Expeditions mode that fixes this by giving players a limited gauge that ticks down with each death. If you're able to stay alive after your partner goes down, you can help revive them and recover some of the lost gauge.

Even on the PlayStation 4 Pro, Nioh 2 won't aim for a smooth 60 FPS experience right out of the box. Much like its predecessor, it offers a few modes depending on your desires. Movie Mode stabilizes the frame rate at 30 FPS while offering a resolution somewhere between 1080P and 1800P depending on which console you're on. Action Mode swaps the priorities around and aims for 60 FPS while reducing the resolution down to 720P-1080P. The third option is a Variable Frame Rate for Movie Mode that tries to find a comfortable medium between the two. I spent my entire time playing Nioh 2 in Action Mode because those few extra frames really help to time a perfect guard.

Nioh 2 builds upon the successes and failures of its predecessor and offering new tools to battle with the role of a half-yokai as the player character. Some may say this iteration is even more brutal than the first!