If you own a Nintendo Switch, you don't need a Switch Lite. I think that should be obvious to everyone because, objectively, the Switch Lite is a less robust package than the Nintendo Switch. No detachable JoyCon for easy multiplayer, no docking feature whatsoever for playing on the TV, no Nintendo Labo compatibility unless you buy separate JoyCon, and even then it's not going to work well with everything. But despite those facts, it looks incredibly attractive, and when it's finally in your hands, it's even better.

The Nintendo Switch Lite has changed a few things when compared to the original design, but after just a short period of time using the unit, I don't want to play handheld mode on my standard Nintendo Switch ever again. Nintendo has managed to make several small changes which make the device considerably lighter in the hand, incredibly comfortable, stylish, and just so, so attractive. It's so good, in fact, that I'm willing to recommend it as a dedicated handheld Switch to people who already own a standard model to keep at home - with some caveats, that is.

Let's start with the basics. The Nintendo Switch Lite is a redesigned Nintendo Switch. It isn't more powerful, isn't weaker either, and is dedicated to handheld play only - no more docking to play on your TV at home. Games will perform just as they do on an existing Nintendo Switch in handheld mode, only with a slightly smaller screen on the Switch Lite, games will look slightly sharper. In boasts an improved battery life, and three stylish colors to buy the unit in, grey, yellow, and turquoise, with special editions expanding the library of colors in the future. 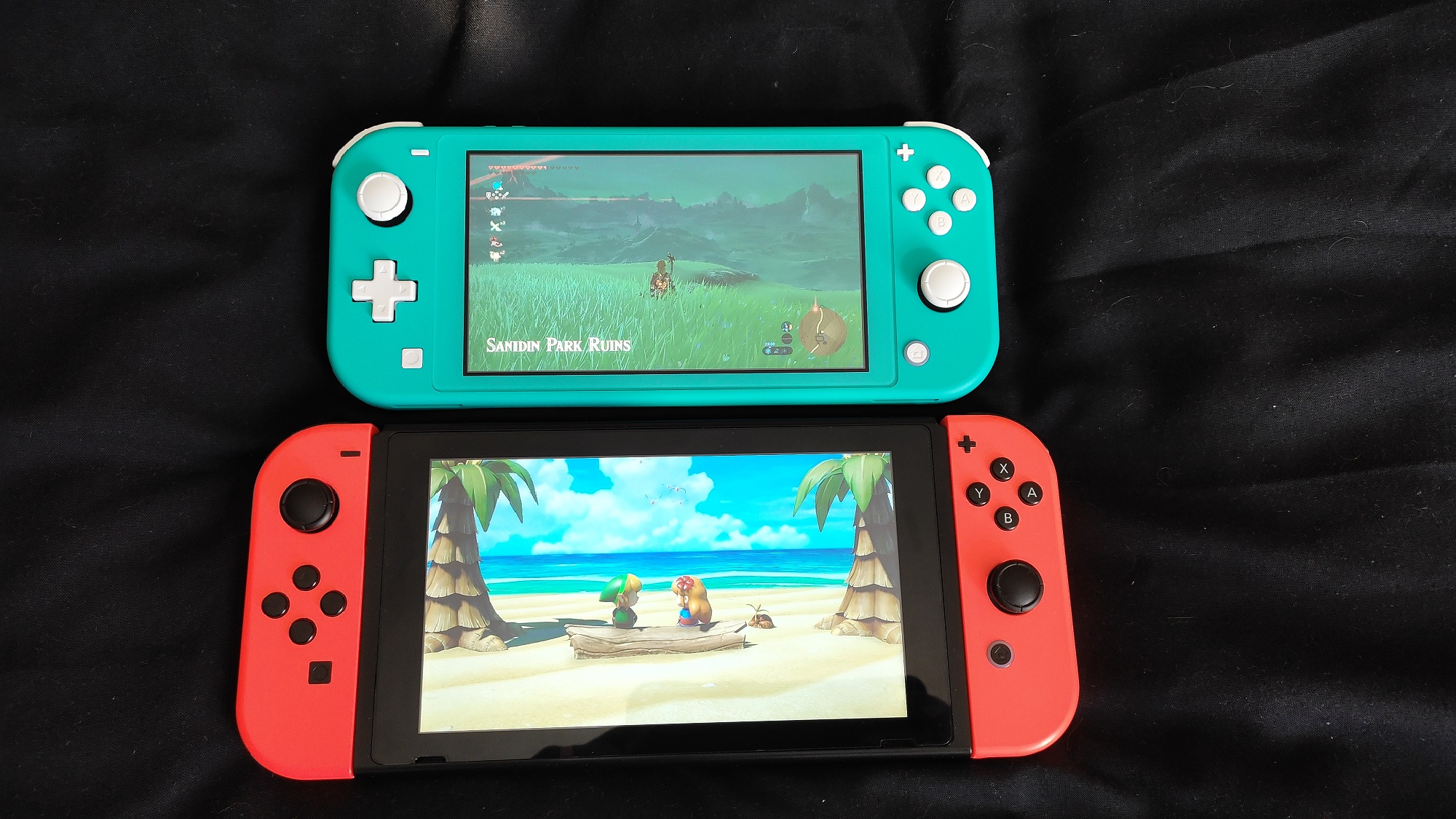 The device is as wide as the standard Switch with a single JoyCon removed, about half an inch shorter, and a tiny bit thinner. The screen isn't actually too much smaller than the primary unit, at 5.5" compared to the original 6.2", and is still 720p, resulting in games that look very smooth with few rough edges when running at native resolution. The Switch Lite weighs in at .61 lbs while the standard unit weighs .88 lbs with JoyCon attached, and .66lbs without, meaning the Switch Lite feels lighter in the hand than the original even without JoyCon, and it's certainly noticeable.

In your hand, everything on the Switch Lite feels safer and stronger than on the original model. The plastic on the air vent on the top is stronger, the intake vents at the back are smaller, and the covers for the SD card and game card both feel less likely to weaken or break. In a strange move, the speakers for the device have been moved to the underside, but despite this are still fairly loud and capable - though for best results you should absolutely use headphones, and thankfully a headphone jack is still included.

The buttons have changed slightly on the Switch Lite. While the shoulder buttons feel the same as their JoyCon counterparts, the triggers have slightly more travel. The face buttons are softer, again with more travel than their clicky JoyCon counterparts. The analog sticks meanwhile feel pretty much the same as the JoyCon, perhaps with more travel, though it's certainly hard to say. The biggest addition is absolutely the properly connected d-pad, which is viable now that splitting JoyCon for multiplayer isn't a thing.

If I am to make a complaint about the layout and design, it's this: to have a good grip on the d-pad to play fast platformers, I feel like I need to move my entire left hand down the Switch Lite slightly. I had this exact same issue on the New 3DS XL, where the d-pad feels fine, but just somewhat too low on the console. It's certainly not the same as playing with the d-pad on the Switch Pro Controller, but a minor point that'll end up coming down to playing preferences and comfort.

Now that we've covered the functionality and design changes on the Switch Lite, it's time to look at how it plays games, and there's not much to complain about. When playing the new The Legend of Zelda: Link's Awakening the game looked utterly stunning in handheld mode, with all of the rougher edges washed away by a gorgeous presentation on the smaller screen. Mario Kart 8 Deluxe feels great to play even online, Shovel Knight was as smooth as ever, and the NES and SNES games included in the Nintendo Switch Online subscription were great to test out controlling with that d-pad, which feels just like all the Nintendo d-pads you've ever known. If there's a negative to speak of whatsoever, it's that games like Fire Emblem: Three Houses which have a small text issue are only going to have that issue exacerbated on this smaller screen. Personally, when it comes to action-heavy titles such as Bayonetta or Astral Chain, I dislike playing without a Pro Controller, and that is still my preference, though I would still happily play these games on the Switch Lite when on the move.

So the device is lighter than ever, has a better battery, plays games great, which is all great news. But should you buy one as your only Switch, or a secondary device? That's a difficult question.

If you are looking to have this as a secondary Switch while keeping your existing unit docked at home, it's a good choice, with a few caveats. For one, you won't be just swapping your SD card over to play your games on the move, and if you want to play digital games while disconnected from the internet, you will need to set your Switch Lite as your account's primary unit, while your always-online docked Switch can be a secondary. Swapping between the two is fairly painless thanks to Cloud Saves, but for games that do not support them, such as Splatoon 2 and the upcoming Animal Crossing: New Horizons, you will need to link up both systems to transfer title save data, which can feel like a lengthy process. Swapping between the systems regularly comes with a few complications, but for the most part, works surprisingly well.

The Nintendo Switch Lite is aimed at those Switch users that wanted an even more portable form factor, those who wanted a lower price console, and children. It's great as a portable secondary Switch if you're okay with those aforementioned caveats, and if you just want to play portably with little split-screen multiplayer, it makes a great choice for you. It works as a gift for younger kids too, since it's far more robust and well-built than the original Switch model. It's a great system in so many ways, and if only you can buy a Switch Lite dock separately, I would recommend it over the base model. But without the ability to dock to a TV, the Switch Lite for me can only ever be a secondary unit, albeit an incredibly attractive one.

The Switch Lite is a great secondary Switch, though for many the inability to dock to a TV will be an understandable deal-breaker. It's comfortable, aesthetically stylish, and plays games great, but it makes it awkward to play local multiplayer games and without detachable JoyCon it loses loads of existing functionality. A great gift for kids, perfect for those who wish to play a Switch by themselves in handheld mode, but for many, the original model will still be the better choice.