It has been months since I first built all of the (at the time) brand new Nintendo Labo Variety Kit. I spent hours putting together a fishing rod, a house, a piano and more, and I came away from it somewhat sad that it was over.

The reality was that the building really was the meat of the game. Make no mistakes, there are games to play once everything has been put together, and the satisfaction that comes from building can't be understated, but the levels of enjoyment definitely dropped off. My complaint? The lack of a really meaty game to hold my attention. Not to sell the piano short or anything, but most of my fun was had with the fishing rod.

Fast forward to now, where I have an awkward pile of cardboard I can't bare the throw away in the next room, and I'm back at it again. Supplied with a Nintendo Labo Vehicle Kit, I was pretty excited. The Variety Kit had, well, variety, but I was thinking a more dedicated, focused Labo kit might provide me with an experience closer to what I was looking for. And again, Labo marvellously succeeds in places and falls short in others.

Step one of Labo is building the ToyCon, which in this case are the Key, Pedal, Plane, Submarine and Car. Yep, the kit has a fair few things to look at in it, and just as before, building is really, really enjoyable. Whether by yourself, with children or even with other adults, building ToyCon is just a wholesome, happy experience. Once again, the game software walks you through absolutely every step of the building process - possibly to the point of being obnoxious, but this is meant for kids - and as you progress through each build, your sense of satisfaction just skyrockets as things near completion.

And just as before, I find it hard not to marvel at the designs and the way everything comes together so satisfyingly. Every piece of cardboard is accounted for, every little jut out on the box, every tiny, seemingly insignificant piece takes its place in a grand symphony of clicky cardboard.

To this end, the Car and Submarine ToyCon are fascinating. Seeing gears click together inside of the Submarine feels like something that just shouldn't work as well as it does. The same goes for the car when once created all of the rubber bands and reflective tape make for a "convincing" driving experience, at least when coupled with the pedal. But what's more is that they feel still surprisingly solid, and the Pedal can at least take a surprising amount of weight should you put your foot down.

The Vehicle Kit Plane, Car and Submarine ToyCon all interact with a game in Adventure Mode, a surprisingly chunky open landscape that you can explore the different regions of. It really is a chunky bit of land, and each region has several missions for you to complete. Pop balloons in a plane, submerge to find things as a submarine, refuel and drive about as the car, pretty basic stuff.

The Adventure landscape can definitely keep kids invested - all they really need is a world to play with their new vehicles - but if you're an adult or dedicated gamer, well, it's doubtful there's much to keep you here. A Slot Cars game where you guide a small car on a track using only the pedal to control speed is very fun as you pass the ToyCon, beating friend's speeds. Circuit uses the same tracks, but lets you take them on in a car in first person view, giving them a totally different feel. Bumping up the speed in this mode makes you feel like an actual racer.

Rally and Battle are also here. In Rally the Adventure mode world gets repurposed into separate tracks, and it works okay, but only as an aside to the Adventure mode - in fact, they could've easily been bundled into it without making much a difference to things.

Battle mode is bigger, but sadly to play against friends you're going to need another steering wheel. You can, of course, print off your own Labo blueprints, but that does sound like a pretty difficult task. In this mode you simply knock one another off a large platform, complete with obstacles and power-ups.

So once again, the Vehicle Kit, just like the Variety Kit before it, offers a surprisingly large amount of content. Building the ToyCon is, for my money, still easily the highlight of the experience, though that's not to say that playing with them hasn't been fun. It has. Just that, like the Variety Kit, I'm not sure I'm going to continue to play with them.

My nephews will adore playing the Vehicle Kit the next time they visit, just as they did with the last Labo kit, but after they've had their fill, their attention will drop away. But the experience of building the ToyCon for yourself or with your kids is unlike any other. A great bonding experience, incredibly educational, and well worth the time and money. Just, unlike the rest of the game, that all comes to an end once you run out of cardboard.

Review unit provided by the manufacturer. You can purchase the Nintendo Labo Vehicle Kit on Amazon. 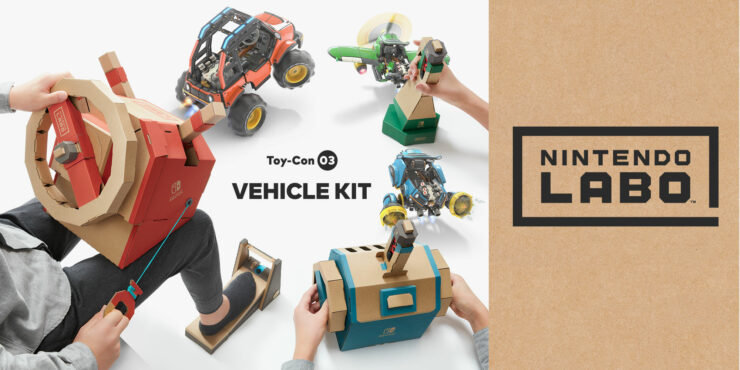 Nintendo Labo Vehicle Kit is another fascinating, clever step in Nintendo's Labo line, one that still managed to be as enjoyable as the first time I started folding cardboard months ago. The building is still far better than the playing, and adults will likely find it too simple, but kids and creatives will once again find loads to while away their time with here.