Nintendo Labo is an incredibly difficult thing to sum up. Many video game experiences can be fairly linear or have a "best strategy" or something that essentially codifies the way you interact with the game world. Nintendo Labo has that, certainly, but it also acknowledges that it's worth is intrinsically linked to whatever the user wants to do, or whatever they are able to do.

It starts with the building, where you follow an in-depth tutorial which takes you through which pieces to pop out of which sheets of cardboard, how to crease them, how to fold them, literally every step is gone through in painstaking detail for you to follow along with. Simple enough for a child to be able to do it, basically. 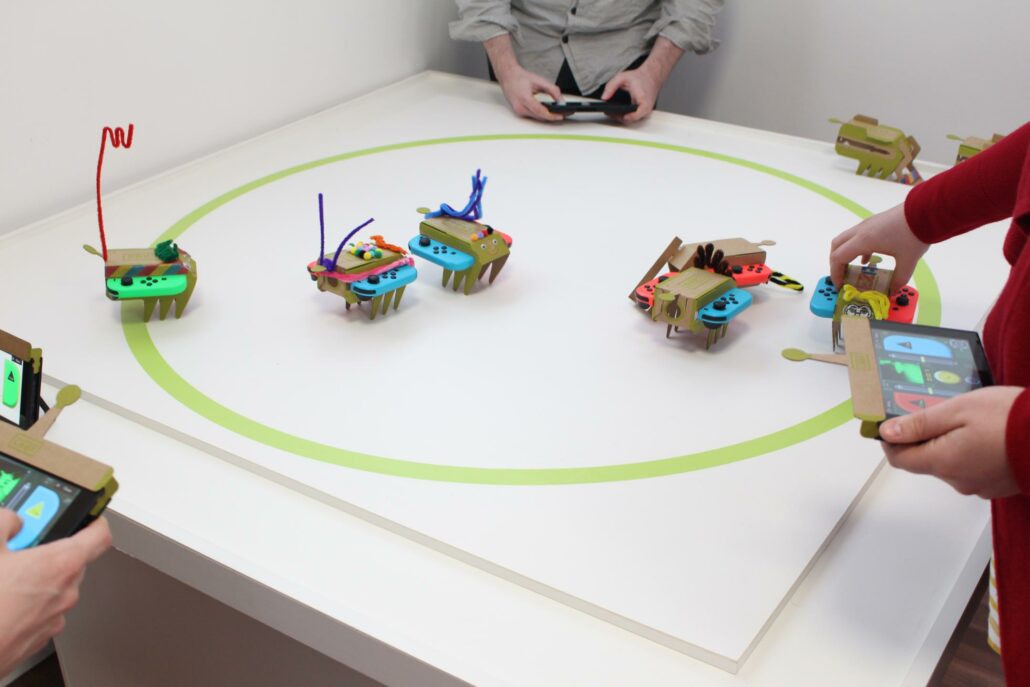 It's tempting to say that Nintendo Labo is for children exclusively, but after the amount of enjoyment I've had with it, it's impossible to say. Obviously, this is something that's geared towards children in many ways. The ability to create and customize your own gaming peripherals is wonderful and enhances the experience, but it's a child's imagination that can truly make these things much more than the sum of its parts. After all, the sum of its parts is a lump of cardboard.

After you've built everything and you feel a sense of pride (and you will, regardless of your age, I assure you) you can start playing about with things, and another shocker is just how well things work. The switches you folded together and attached a couple of stickers to - slightly misaligned, at that - still function just as intended. Everything I built, even with my heavy hands and lack of patience, just works, when cardboard shouldn't work. It shouldn't be so simply responsive when I quickly tap a key on the piano, and it shouldn't be able to track how I use the fishing rod so perfectly, but it does.

But then we get to the ToyCon Garage, something I find frankly terrifying. Luckily, like everything else, the game software gives you step by step examples on how to create and innovate, but ToyCon Garage truly seems limitless. Music synthesizers, doorbells, simple morse code relaying devices, all of these can be created with relatively little effort thanks to ToyCon Garage. But, honestly, it feels wasted on me. My withered brain can barely imagine getting out of bed in the morning with a smile on my face, let alone creating deep interactive gaming experiences with the JoyCon features. 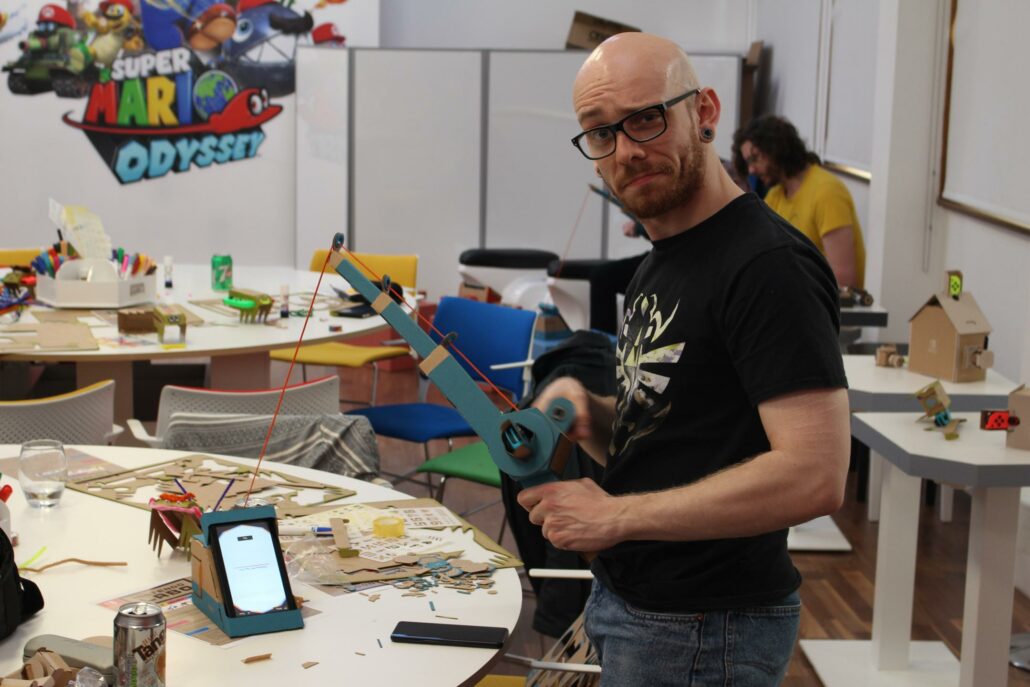 As I've said, the value of Labo is, from the beginning, linked with what you, the user, are able to do, or what you intend to do, or perhaps, the amount of patience you have to learn. It's simple to understand and jump into, but the sheer volume of possibilities, with ToyCon Garage alone, is staggering and hard to wrap your head around. Where do you even begin?

And then that wraps back around to Labo being marketed as a children's toy. If I were a child, Labo would be incredible to me. I would spend hours customizing ToyCon, and even longer trying to create my own games in ToyCon Garage, and from a parent's perspective, this interactive model kit turned video game is perfect for stimulating a child's imagination and not simply whiling away time on a shooter with abusive voice chat. Not to mention the simple programming-style interface of ToyCon Garage, which is sure to train, if not familiarise, today's youth with a vital career skill for the future.

So how do those ToyCon and the games come together? Well… 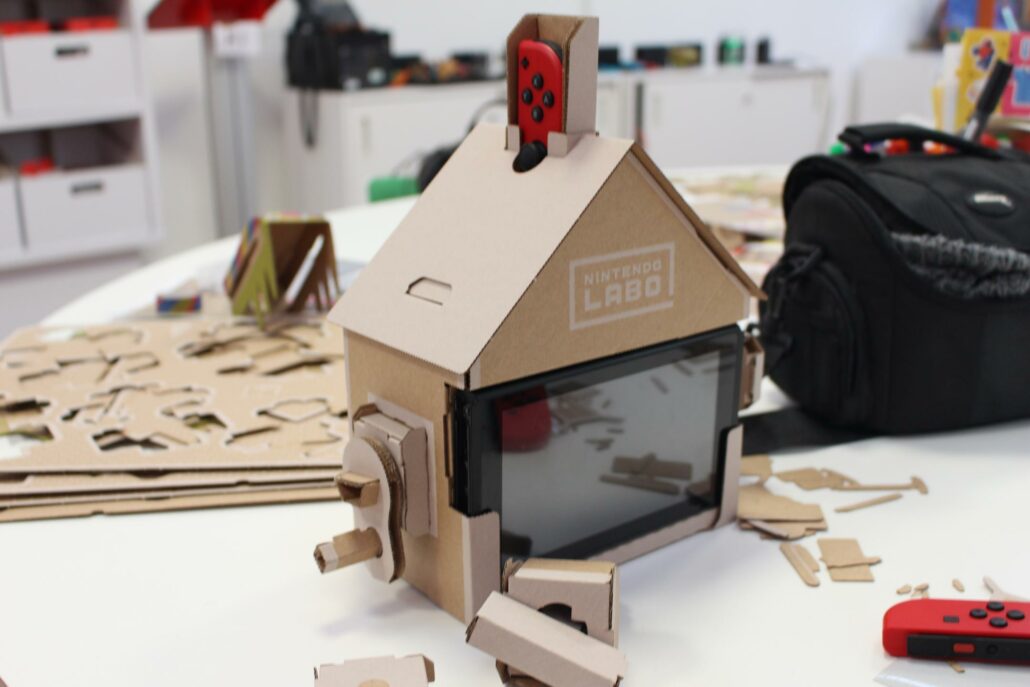 The RC Car is super basic. It takes five minutes to fold together, you slap it on a flat surface, and away it slowly vibrates. It's not an amazing creation by itself by any stretch of the imagination, but instead a small example of the kind of things Labo can do, turning your existing game controllers into something you probably never thought of before.

When it comes to software though, well, you can make a second RC Car and, if you have two sets of JoyCon, you can race them against one another. That's fine I suppose, but more interesting is the IR camera on the right JoyCon, which you can view, giving you a night-vision look at the world through a JoyCon.

It's nice, but not really an essential part of the package. 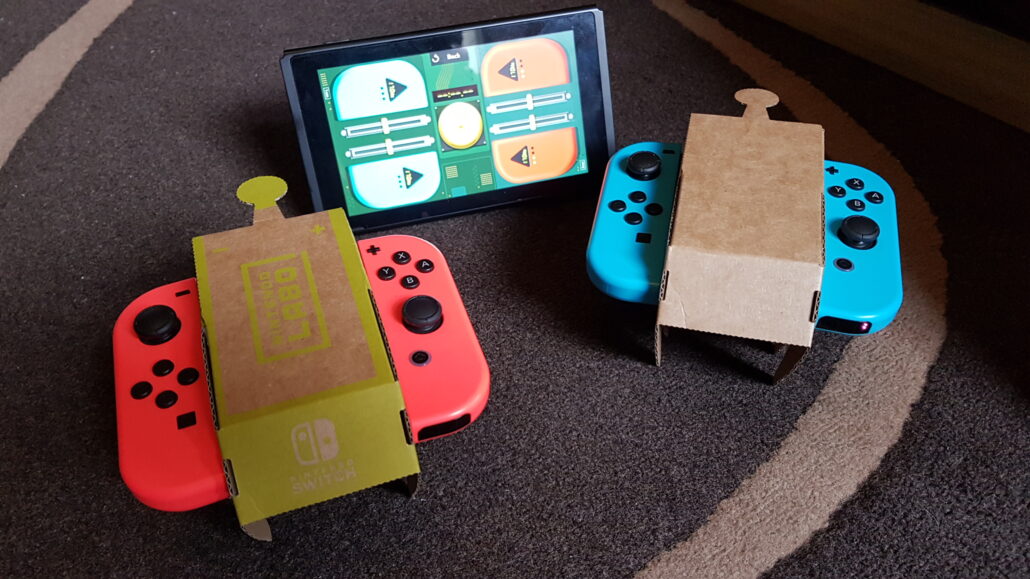 Building the house's buttons is really nice. It gives you a look at how some of the more complex parts of Nintendo Labo creations come together. The clicky-wheel which acts as a crank is a particularly addictive fidget-spinner replacement.

Unfortunately though, the software itself is a bit… Well, it's fine. You get several minigames, all accessible by putting two of your buttons into the house. Different buttons and placements will get you up to 9 tiny minigames, though none of them are particularly amazing. A short Balloon Fight style segment and a bowling alley were highlights, though.

Fun to pull out and show people, but you will not be sat with it for hours. 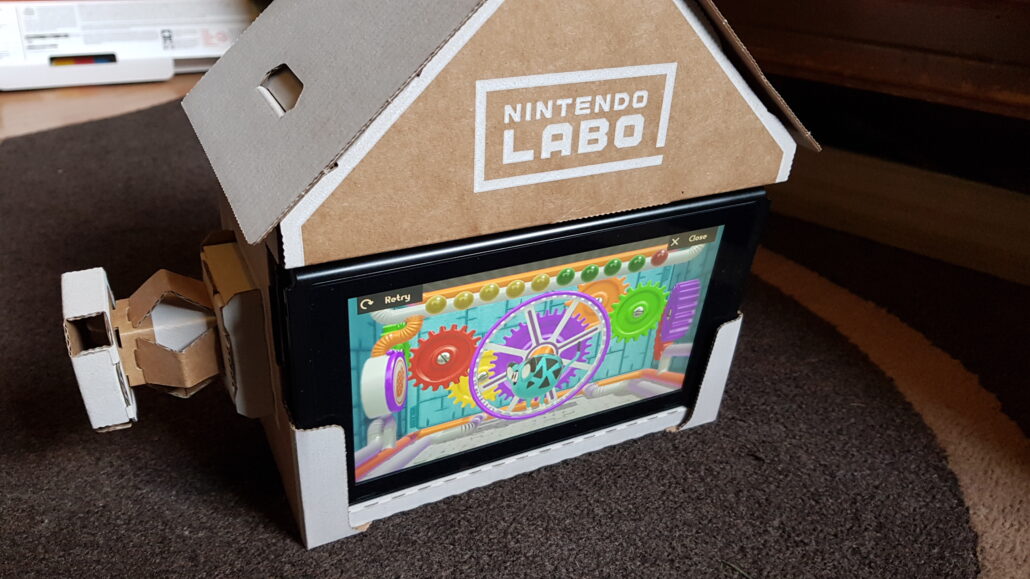 Alright, this is where Nintendo Labo starts getting interesting. Not only is the extendible rod incredibly satisfying to build, in addition to the larger clicky reel, but the game has depth. And I don't just mean water level depth, although it does seem to get pretty deep and dark in the ocean.

If you've played a fishing minigame before, you likely know what's up already. Point the end of the rod in the direction a fish is facing when they start pulling and reel like hell when they're not. If you go for simple surface level fish it's a fun but unexciting experience - once you go deep into the depths and attempt to pull up a shark, it's completely different. Things get intense and there's a degree of mastery here which will keep fishing fans glued for hours - no joke, this is the Sega Bass Fishing spiritual successor you've been waiting for. 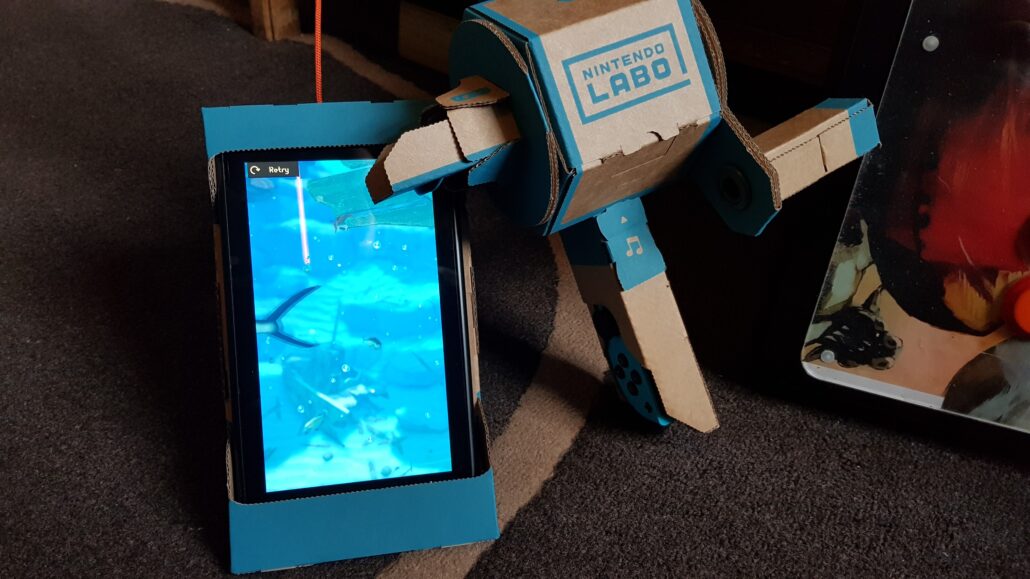 It's odd because building the motorbike, certain parts feel stiff. An ignition button the right handle and a horn on the left both feel oddly placed and stiff, but in practice actually work well. The right handlebar, which can be gripped and twisted to accelerate, is pulled back in to place neatly with a few rubber bands. It all works shockingly well.

It's a shame though that things need to be loosened and undone slightly to put the Switch in, take it out, same for the JoyCon, which are locked into both handles.

The game is a lot of fun though. There are several simple cups for you to complete, which won't take long, but the ability to scan objects with the IR camera and use those as makeshift courses is a fun experience you just have to try with a bunch of household objects.

Probably not one to last you forever, but certainly fun while it lasts. 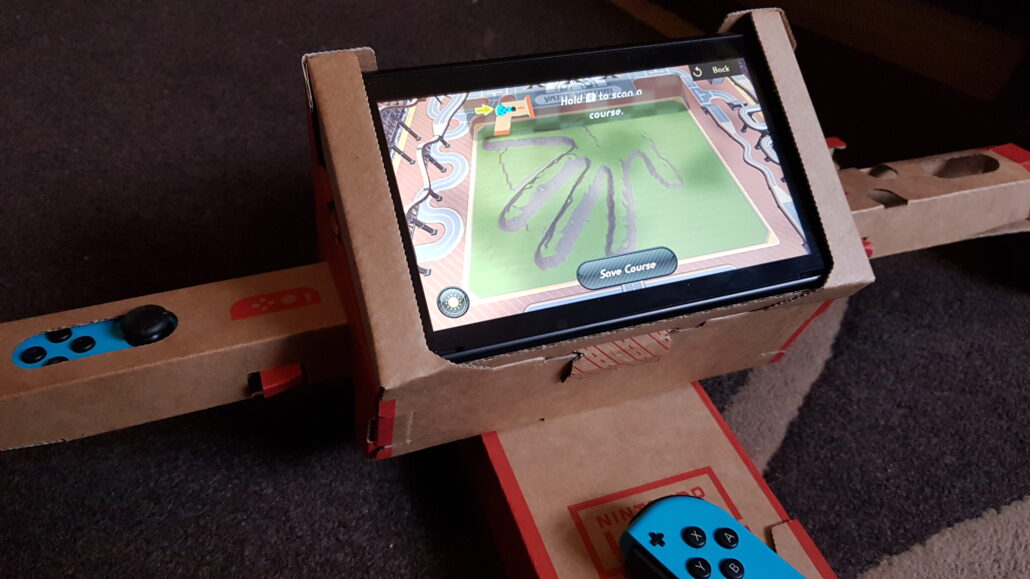 This one is the hardest to quantify, by far.

Building the piano is a bit fiddly, especially the keys and all of the reflective tape stickers you need to attach to the keys and four switches you build. But of course, follow the guide closely enough and you'll eventually get through it, though it definitely feels like it takes time.

You get a small pitch shift switch on a rubber band, record and play buttons and a few more features. When you throw the switches in you made it changes the type of tone the piano makes, including one that makes the JoyCon in the piano vibrate, literally vibrating out the notes you play. It's an interesting use of the technology, one that was somewhat demonstrated when we first saw the JoyCon and HD Rumble.

But this isn't actually just a toy. Or, it doesn't have to be. There's a studio mode allowing you to make use of several octaves and notes, recording up to 8 track layers. Essentially, it allows you to make music. Legitimately, make music. Output those tracks to your PC using the headphone jack, play around with synthesizers in ToyCon Garage, what do you have? An entirely legitimate musical instrument. Which is insane.

But that's all down to you. The game isn't going to teach you to play the piano, after all. Again, another stark example of the fact that Labo is going to have as much value as the user can put into it. Whether you're a musician or not, having either the capability or drive to learn is going to increase the value of Labo to you tremendously, double or triple that even if you're an artistic type who is interested in decorating, displaying or creating custom ToyCon. 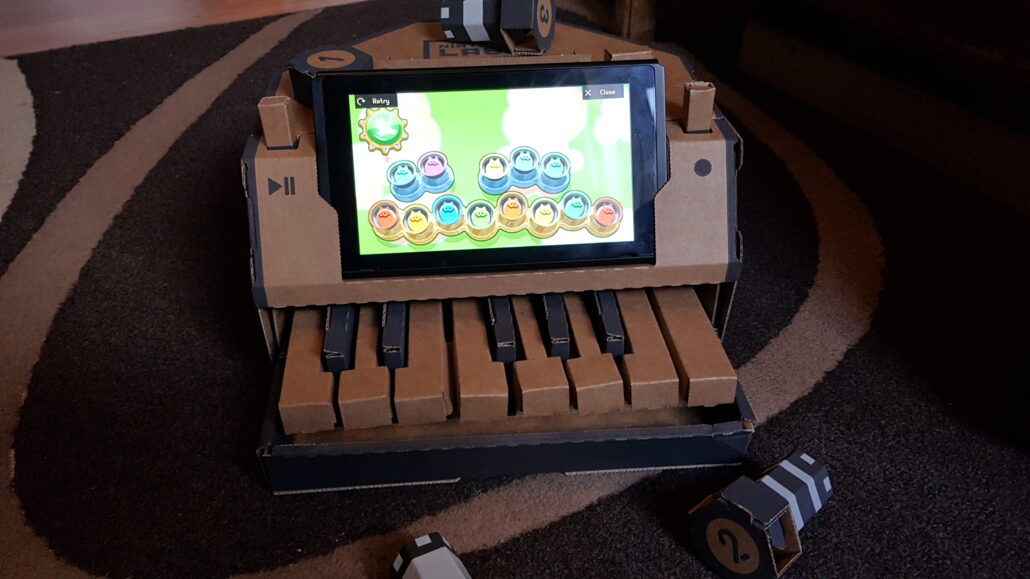 In the Nintendo Labo Variety Kit, you really do get a variety, and it helps you understand what Labo is intending to do. Create a unique platform, for a new type of gamer. One that steps outside of the realms of the game, and brings their own customizations to whatever they're going. Like decorating your units in a real-life game of Warhammer, these customizations are worthless - but they have value to you. Which kind of sums up Nintendo Labo, actually. It's a pile of cardboard. Worthless. But you can make it worthwhile.

Nintendo did it once again - they gave me an experience I didn't think I'd have. I didn't think I could have, and they made it great. However, I've said it time and time again, the value of Labo will be greatly different depending on who you are. As a gift for children that have a Switch? Absolutely. Wonderful choice. Teens or adults? Hard sell. I adored my time building and playing with the ToyCon, but some people won't. I didn't get as much value out of ToyCon Garage as I'd have liked, but others will see it as the essential feature of Nintendo Labo.

Review unit provided by the manufacturer. You can purchase the Variety Kit via Amazon.

Traditional "hardcore" gamers won't get the most out of Labo unless they're willing to massively step outside of what is their gaming comfort zone, while creatives, musicians and children will find so, so much to do and enjoy. But regardless of your playstyle or preference, I can heartily recommend trying Nintendo Labo when you get the chance to put your hands on it. Playing it is fun, everything works, but the satisfaction of building your own peripherals is entirely unique.