If Splatoon ended up moving towards the free to play model for the next installment in Nintendo's biggest shooter, I wouldn't be mad at all. Free to play games have become an excellent way to play with your friends, try out things you may not have considered before, and kill some time with something new, without having to empty your wallet. I'm a big fan of free to play games, and Ninjala proves to me that Splatoon could work in this format, because other than the excellent price of free, everything Ninjala does, Splatoon does better.

I feel uncomfortable starting off a review of a game by outright saying that other, similar, games do things better, but in the case of Ninjala the similarities and comparisons are, frankly, undeniable. The modern street fashion and musical influence, the strange, super-powered children, the bright colorful visuals, the fact that it is primarily an online multiplayer game, it seems very much impossible that the developers made this game in a vacuum where Splatoon didn't occur to them. Heck, Ninjala even has a cat mascot similar to Splatoon's Judd.

Not only that, but the concept of Ninjala has clearly been in flux over the course of the last few years. A surprisingly nice CGI animated short appeared on YouTube months ago to market Ninjala, and we got to see the creation of the Ninja Gum, a chewing gum that boosts the powers of those with ninja blood, all while turning them into children. Since then it seems the concept of transforming into children has disappeared - one too many Splatoon comparisons I suppose - and instead Ninjala is a tournament used to train and raise the most promising of young ninja. Ninja Gum is still here, but its mystical properties are put to the side for the sake of just using the gum in battle.

This is a free to play multiplayer game of course, and it does at least handle things differently to the likes of Splatoon. Instead of shooting enemies, you'll be setting them up for a beatdown with your ninja weaponry. There is a variety of weapons to choose from right at the beginning of the game, so you can begin playing with the weapon and style that suits you. In battle, you will maneuver around opponents and shoot them with long-ranged weapons and blasts of Ninja Gum, before moving in the smash out your combos.

In battle, Ninjala is both great and feels slow and unresponsive. If you have the upper hand, Ninjala feels great. You can bamboozle opponents, surprise them by flying up the side of a building and shooting down gum before attacking, and lock them in a stun until they die. If you're being attacked, well there's a good chance you'll just die. You can parry opponents, when mid-battle you'll be able to select a direction, and this direction will activate a rock-paper-scissors moment. Selecting an advantageous direction compared to your opponent's choice will lead to you getting the combo opportunity. But when actually fighting, that's it. In addition to that, at the end of combo strings you have massive end-lag, and you won't be able to cancel out of your animations and run easily either. It leads to a game that ends up feeling more unresponsive than you would like, especially when stuck in one of those combos. It ends up feeling like an anime arena fighter in those moments - which certainly isn't a compliment.

When you start a battle your initial goal should be to defeat drones in the arena. Defeating drones increases the power and size of your Ninja Gum, and will eventually allow you to spawn giant weapons to attack with, doing much more damage. If you don't have giant weapons by the end of a round, you've messed up somewhere. But this will leave you open while you search for drones, and should you get hit without expecting it - or worse, attacked by two enemies at once - you are going to have a very bad time indeed.

And this bad time is made worse in Team Battle. Ninjala's multiplayer combat is at its best when you and another player are chasing one another and fighting, as soon as teams get involved, it's messy. As a solo, you stand no chance against another pair, and as a pair, you won't have quite as much fun. The standard "Battle Royale" (actually just a free for all) is the best game mode, but even then getting hit by two opponents is an absolute nightmare.

It's lucky that Ninjala's movement feels so good, honestly. When moving you can double jump, jump dash, dodge dash, walk on walls, and more - and it's great. There are even weird grindable rails of gum in the sky you can ride, just like in Splatoon. Movement in Ninjala feels great and makes playing the multiplayer games consistently fun, even if you're on the losing side or just can't seem to find an enemy. Linking multiple moves together to get around faster genuinely feels like Super Mario Odyssey - a massive compliment, in case that wasn't clear.

If only those smooth moves had been utilized in the story campaign. Ninjala is free to play, but you can pay for a DLC story campaign, which is less than an hour-long in total, though you can play it again in Hard Mode for cosmetic items to use in multiplayer battles. The single-player campaign is boring. It takes place in the larger of Ninjala's two arenas, and there's a mission where you run to defend points, a boring tailing mission straight from Assassin's Creed, and a big boss that is just… fine. Though, for the current sale price of roughly £3.99, it's worth playing Ninjala's story mode. It's not great, but it's cute. However if these story packs are closer to a "full" price of £7.99 each, I'm out. The game would've benefitted from a platform and combat hybrid in the story missions, but what is here is just disappointing.

Despite all of those complaints though, I have to admit that Ninjala is a very, very charming game. The game looks very nice and colorful and runs at a smooth 60FPS, which made the whole thing look and feel better to play. I do have some reservations about the combat, the lack of stages, a mediocre battle pass, and an uninspired story DLC, but even with all of those factored in, Ninjala is well worth playing. Download it, try it, and you may be pleasantly surprised. 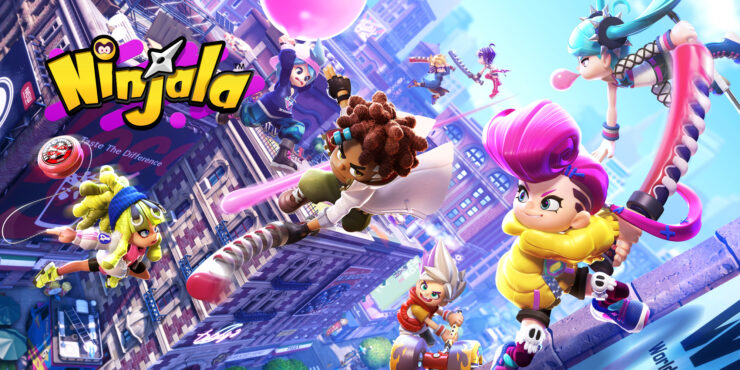 Ninjala's action doesn't always deliver and the combat can feel unresponsive or slow when you're on the receiving end of attacks, but despite that, Ninjala is an excellent free to play multiplayer title that every Switch player should try out. If you like Splatoon but want something a bit different, this is a great game to play. Just don't expect the story DLC to blow you away. At least it's cheap…