Ni No Kuni Wrath of the White Witch Remastered

Ni No Kuni Wrath of the White Witch was the kind of game that from a single screenshot or trailer, immediately made you fall in love with the love. When it released in 2011, the game captivated audiences with its gorgeous art style, adorable characters, and ridiculous pedigree. Now, eight years later the game is coming out on the Nintendo Switch, but can its magic still hold?

Playing as Oliver, you are swept away to a magical world where you must do battle with the titular white witch and evil Djinn. Ni No Kuni is a JRPG, which can be a little off-putting to a lot of people. JRPGs are defined for their overlapping, often complex systems, and sprawling winding narratives. Ni No Kuni has these, but the scale of it all is toned down enough that less intense players can still understand, utilise, and enjoy them. The story is cute and uncomplicated. There is an easily defined line between the good and bad characters and events, but the people and places you stumble across on the way are enchanting.

But what really made it stand out way back when was the name attached to it. Studio Ghibli is beyond famous for its anime’s such as Spirited Away and Howl’s Moving Castle. For a lot of us, these films are what introduced us to Japanese animation, and are filled with a certain kind of childish magic that is next to impossible to replicate. When Ni No Kuni came out, you can feel that same sense of magic and wonder in the game, and thankfully, you can still feel it on the Switch version.

It's almost impossible to say where exactly this magic comes from. Ni No Kuni had a sequel last year, but without Ghibli’s influence, it just didn’t feel quite the same to me. Maybe it's because the first weapon you see in the sequel is a literal gun, where the original has players running around with a stick for the first several hours. Maybe the animation just doesn’t quite have that same movement that makes Studio Ghibli’s work so iconic. Whatever it is, it has been successfully distilled into a handheld version that is perfect for anyone.

This is great game to introduce younger audiences to JRPGs in a way that isn’t threatening or overwhelming. And at the same time is also just a stellar JRPG for adults and fans of the genre. People who only like serious plotlines and narratives arcs probably won’t have much fun talking to Mr. Drippy, the Lord High Lord of the fairies, but for everyone else, it's hard not to be enchanted but its impressive bulwark of innocent adventures. 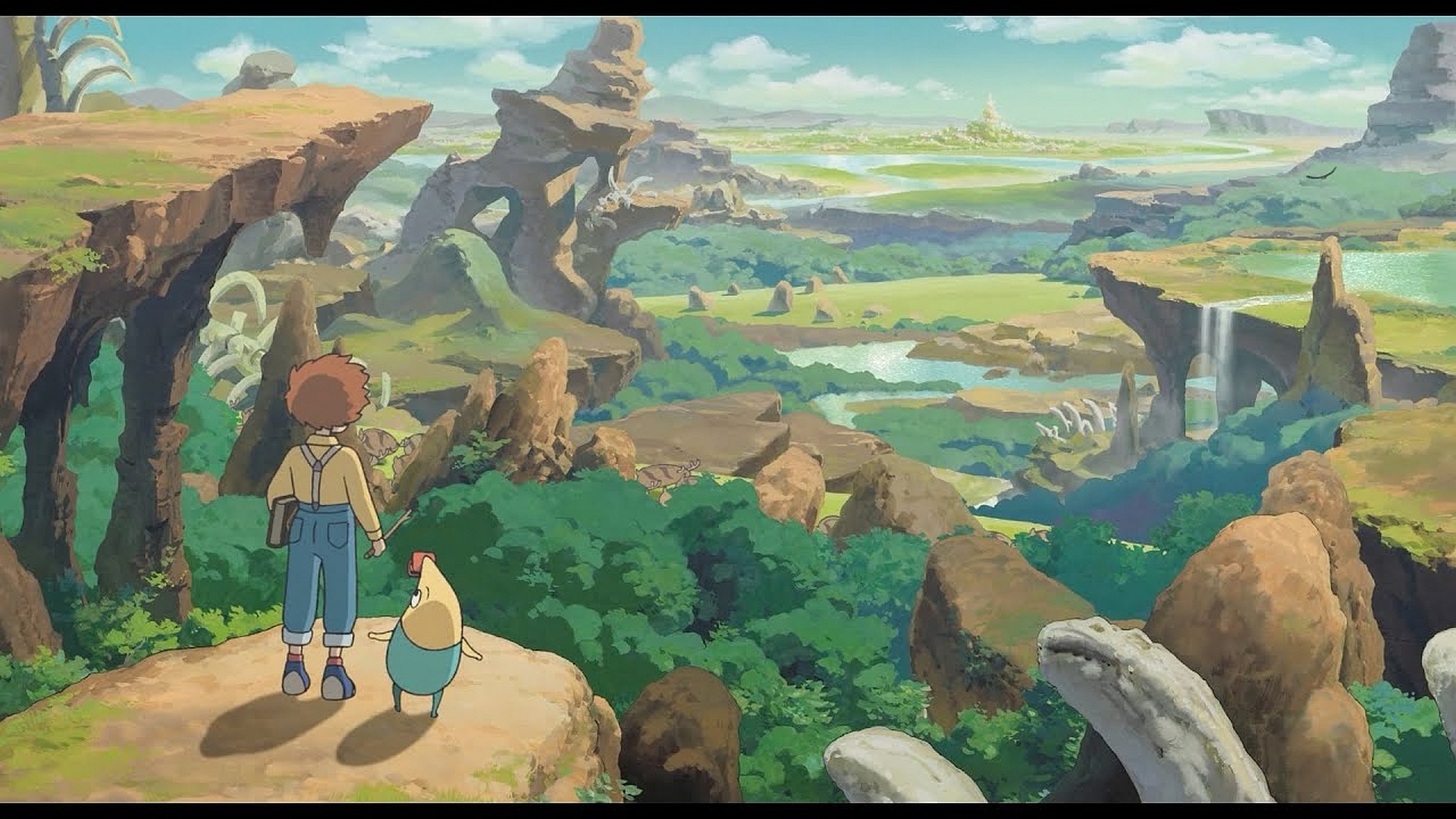 Throughout your adventure, you’ll be collecting familiars to do battle with, each with skills and abilities to learn about. Fighting is all about balancing and timing your actions, and with a shared health pool, its fund and easy to experiment. Outside of combat, when you are watching long cutscenes and forgetting that this is a game, you’ll be healing the brokenhearted. This is a slightly strange system that involves you taking an emotion from someone with more to spare to give to another lacking. The first case of this is taking a little enthusiasm from one guard to give to another. It’s a bit strange, and could easily be opened to some complex moral dilemmas, but the game is so innocent you never have to worry about it.

Its age is noticeable though, despite the wonder. Although the art style is more or less ageless with its bright colours, cartoonish design, and thick black lines, it's not as crisp as other more recent games. For the Nintendo Switch, it's probably easiest to compare it to Breath of Wild, where Zelda’s definition is just a little bit stronger. It still looks fantastic in both big screen and handheld mode, although the characters on the overworld can be a little small when using the Switch in handheld mode, but you can see its age.

But one of Ni No Kuni’s biggest attractions is something that can be a little bit difficult to enjoy on the switch, the music. The full weight of Studio Ghibli’s orchestral skill can be heard through the game, highlighting and enhancing the emotional journey of Oliver, and it's incredible. But the Switch is often seen as a platform for casual games, games that can be played with the television blaring in the background. Ni No Kuni is a game that deserves your complete attention, and sometimes, even when grinding for levels around the Dark Forest it can be all too eager to throw on a podcast.

But there is something special about Ni No Kuni, something lost in the sequel, at least in my opinion. There is a wonder that can’t be found so well refined in other games, and it is a combination of a delightful story, incredible cast, awesome art style and complementing music.

Reviewed on Nintendo Switch (code provided by the publisher). You can get a digital copy for PC via Green Man Gaming at a 10% discount.

Despite its age and a sequel, Ni No Kuni Wrath of the White Witch Remastered holds itself high above the competition thanks to an amazing mix of design, music and story.