Nostalgia is a funny thing – it’s a unique feeling of elation that stems from fond memories. It can be triggered by a familiar jingle, a sweet scent, or in this case, the angular grip of a controller. The downside is that things we’re nostalgic for are too often not quite as good as we remember – food doesn’t taste as amazing as we’d thought, experiences aren’t as exciting the second time around, and games, well, games get old.

It’s with this in mind that I turned on the pint-sized NES Classic, expecting to be amused, but ultimately let down by a collection of 30 NES games that, despite being classics in their time, are now outdated and outdone. And I’m happy to report that the NES Classic and its 30 games are, miraculously, actually loads of fun.

But before we take a look at the software, let’s discuss the hardware. The small form factor NES is, of course, styled after the legendary console itself, but just around an 8th of the original size. Above all else, it’s adorable – as weird as it is to say, the wee gray box is actually very cute.

It has two of Nintendo’s proprietary connectors in place of the traditional NES controller ports – the same connectors you can find at the bottom of Wii Remote, thus allowing you to use any Wii Classic Controllers with the console, or even use the bundled NES pad as a Classic Controller with your Wii or Wii U instead. At the back it has a single HDMI port and a Micro USB for video output and power respectively – showing that the NES Classic is designed primarily for modern TVs that might already have a spare USB port, and won’t support your old CRT. 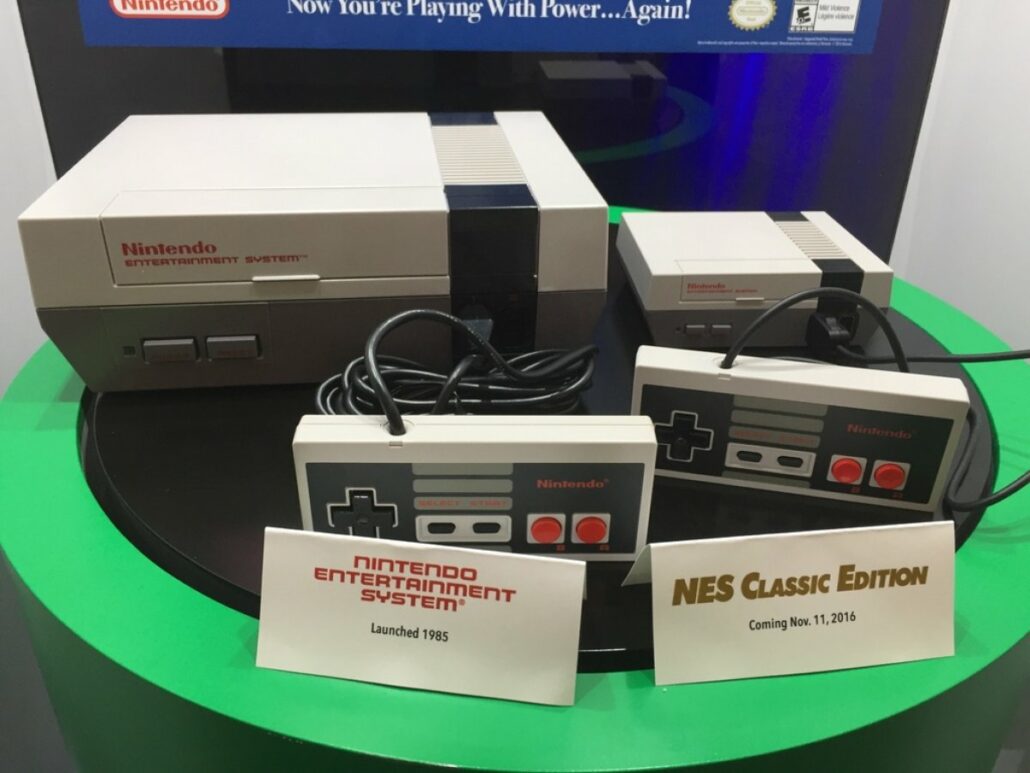 The NES pads have to be a particular highlight for myself – the dimensions are identical to that of the original controllers, and the buttons feel just as good as they ever have. Though for all the praise I want to lavish upon them, the fact remains that the cable is far, far too short. You’ve likely heard the rumblings about unnaturally short controller wires, but the reality is more awkward than you might think, with a gaming session ending up in one friend having to balance the console on his lap so people either side of him could play multiplayer. In one sense, dragging a console halfway across the room in order to have the controller stretch is a type of nostalgia in and of itself. In another sense, it’s an absurd design flaw that Nintendo really should’ve seen coming. Ultimately, even nostalgia has its limits.

And with a smartphone ARM processor under the hood, the NES Classic is actually ridiculously overpowered in comparison to the original NES hardware, though this makes no difference. The system is entirely silent when in operation – no fans or anything of the sort – and doesn’t become hot or warm to the touch in any way, suggesting that the NES emulator is, unsurprisingly, hardly the most demanding software application.

And now on to the games – the collection of 30 pre-installed titles made me raise an eyebrow initially, thinking ‘How can this collection of near 30-year-old games really hold up in any way?’ and I’m so, so pleased to be eating my words. Titles such as Super C, Castlevania, Ghost ‘n‘ Goblins and Mega Man 2 hold up so shockingly well that you can have hours of fun playing each, especially if you decide to play with a friend. Sure, there are a few titles that don’t stand the test of time so well – Tecmo Bowl and Ice Climbers being two that I wasn’t quite as fond of – but more often than not, games play surprisingly well, with no noticeable issues with the emulator.

The OS running on the NES Classic is clean and pleasantly smooth, too. It allows you to have up to four save states for each game, and you can swap between presentation modes, with 4:3, 16:9 and CRT filter modes. Shockingly, I’m actually a proponent of the CRT filter. When playing other classic games or emulators, I insist on having the cleanest picture quality possible, but with the NES Classic, the CRT filter gave each pixel a little extra definition, making it easier to see what the artists were trying to convey with the simple sprites and backgrounds.

But the biggest question is – is it worth the £50 ($60) price tag worthwhile? It’s difficult to say – on the one hand, the console with a controller is only the price of a full-price retail game, and it comes with 30 classics. But, the short cable length and the inability to change or add any games to the system is definitely a drawback.

It's difficult to justify when your phone can likely play NES games with similar results, but when it comes to playing these classic games on a big HDTV, there probably isn’t a better way to do it. The controllers feel good, the games play shockingly well, and one thing I can assure you of is that, whenever I played the NES Classic, I had fun – even more so when a friend was there to share the fun with.

Nostalgia in a cute, grey package. Great for collectors or as a Christmas gift, but not sure the kids of today will spend hours playing it.