MXGP2 Review – Digging in the Dirt

The only bikers I know seem to spend half their life with their face planted straight in the ground. That's mostly because people in cars are terrible at caring about anything outside of their metal shell and partly because driving around on two wheels without stabilizers and at least 20 layers of clothing is in itself a little bit mad. MXGP2 captures that madness perfectly.

Motocross is incredible anyway. The idea of choosing to tackle hills, mud and large advertising billboards with nothing protecting you but sponsored slogans is just the right level of insane. The people who ride are incredibly talented, granted, but that's only because the less talented ones are sitting at home, crying because they have to eat soup through a straw. 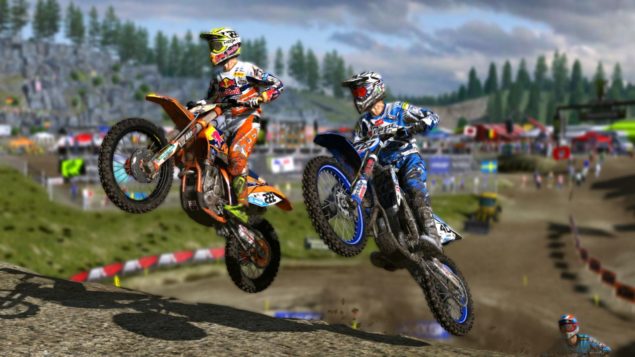 Unfortunately, that's part of the Motocross experience that this game fails to replicate, and it's not the only downside either.

The complaints begin fairly early on in the experience. The first time you put the disk in, you have to pick a race, choose a face for your manager and even pick the brand of bike you want to ride. Instantly seeing menus the minute you switch on isn't a great introduction to a title, if only because its the exact opposite of the roaring engines and screaming audience that you would expect.

Then you're finally allowed to race and you're met with loading screens. The loading screens are easily the worst thing about this game which, depending how you look at it, is a pretty good recommendation. I don't know why racing games struggle with this so much, but it seems like a regular occurrence. When you title is built around short bursts of gameplay, making sure you don't separate that gameplay with over complicated menus and long loading times should be top priority.

After far too long waiting, you're finally put into your first face. Two seconds later your rider is a broken mess on the floor. It would be wrong to say this is a simulation racer, because it's not really. There are elements there that are very realistic, and others that are less so. For instance, it's easy to tip your bike as your race around the track, because you've hit a hole in the road or a particularly lumpy bit of ground. This goes a long way towards increasing the challenge and setting it apart from other racing games. It's not just a narrower vehicle model, and that's the way it ought to be. 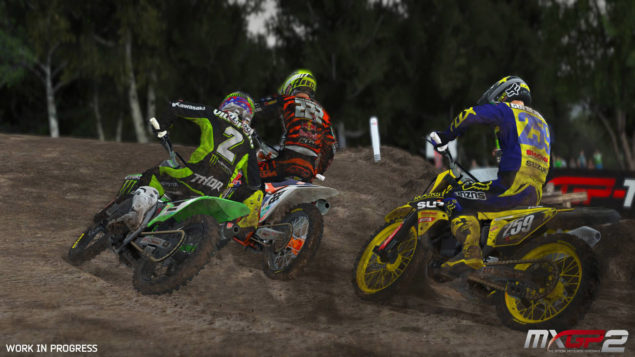 On the other hand, going slightly off the track will magically transport you back to where you ought to be, even when there's the feeling that you could have saved it with a little effort. This makes the learning experience that much easier, yes, but it makes minor mistakes and the occasional mismanagement of your rider's weight all the more annoying.

Overall though, the experience is very enjoyable. The problems you come across can be annoying, but I'm not sure there's a better option available to Motocross fans anyway.

Thankfully, those that like it will end up having plenty to do. There's a whole host of content unlocked straight from the beginning. As well as the standards you'd expect - career, quick race - there are a few nice additions too. The most interesting is the real race mode, that puts you into a situation that a real rider needed to deal with and lets you sort it out. It's only a slightly different version of the standard race, but the change in objectives and difficulty gives you something else to focus on.

Like most driving games today, there are a whole host of options for beginners and experts to get their teeth stuck into. Driving aids are automatically turned on, including the option to rewind the action several seconds if everything goes wrong. As you progress, you can slowly turn off these options to make life much more difficult for yourself. On the highest physics mode, you're challenged with getting around even a single corner without digging in the dirt. I'm pretty sure getting around two would net you the platinum trophy, no more questions asked. 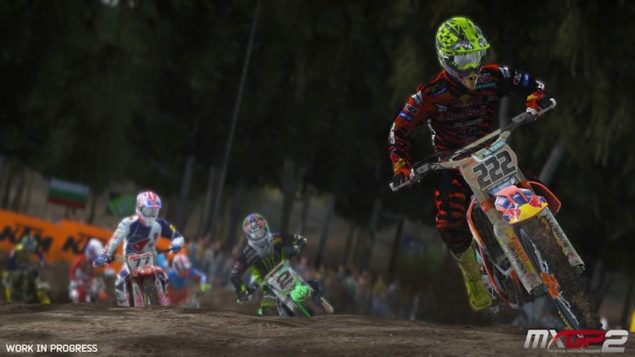 At first, I was a little disappointed with the game visually. There's not much life to it, and considering you spend most of your racing career looking at the same muddy path, it doesn't really progress from there. With time though, it managed to grow on me. The textures are pretty nice and there are some nice variety to the locations. There are indoor courses, which are pretty rare, and which may indeed be a selling point in and of itself to those with the interest.

There's also an amazing first person mode. I can't stress this enough - the way it handles the camera is perfect. There aren't a lot of options, but the way the camera simulates the head is spot on. You soon start switching from third person automatically.

The audio design isn't awful. Expect to hear very little else apart from the engines disappointingly lacking in bass and the sound of drums. I presume there are other instruments in the mix, but you won't hear them.

Ultimately, MXGP2 does what it says on the box. You get a decent racing game, a decent bike game, with a few options that go above and beyond what you'd expect. It's not a million miles away from what Milestone have put out in the past and it doesn't need to be.