Morphite is a puzzling a game. It might not be exactly what the developers of No Man’s Sky were trying to make, but the comparison is almost impossible to ignore. Jumping across the galaxy, you wander lonely worlds looking, cataloging the native wildlife and collecting rare minerals. Morphite is definitely its own game though, with the small studio using much less computer generation. The worlds you can explore in Morphite are linear spaces that slowly open out for the player, with creatures that are not Frankenstein’s monsters of computer-generated randomness.

With a great low-poly style, Morphite creates beautiful contrasts and stark color palettes in each world, which make it genuinely exciting to land on each new planet. A lot of care and attention was clearly put into to make the game seeming minimal while teeming with beautiful vistas and little corners to explore.

Like No Man’s Sky, it is a relatively peaceful game. Although some of the local nature might not be happily welcome you to the planet, they can be easily dissuaded with a few shots. After that, it becomes a mellow journey through alien worlds. But, when I first started playing, I thought I had almost immediately found one the core mechanic’s almost completely unplayable. Scanning the wildlife requires you to keep steady aim on the creature or plant in question. While plants are easy enough to point at, smaller and faster animals are nearly impossible to capture. As it was one of the best methods of earning money in the game, being unable to do so meant it’d be slow to progress. Currency in Morphite is used to help upgrade your equipment and ship, needed to explore and survive. 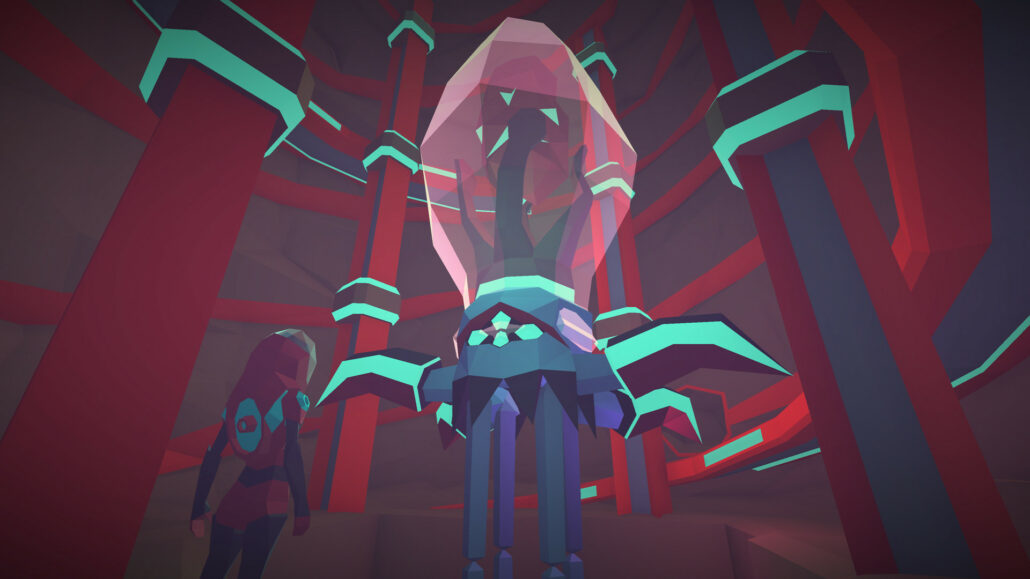 What I didn’t expect was for Morphite to give me the tools to fix it. It was difficult, and it meant working with a system I initially struggled with, but upgrading the scanner would fix what first appeared to be a design flaw. Do so gave me a real incentive to engage with the collecting the various resources and upgrading until it was what I wanted to play. While a lot of games offer only passive improvements or minor changes, Morphite has a system that means you can feel the changes to the game.

To say that the initial stages were unplayable might have been an overstatement. I still had a lot of fun wandering the serene landscapes, and scanning the slow-moving plants. But to open up so much more of the game myself, earning it through play and exploration felt really satisfying. Unlike other games that give you new abilities or introduce new features at prescribed moments, Morphite leaves it up to the player to unlock a lot of what is on offer, and it just feels good to do be able to do that.

Of course, along the game's journey, you’ll find moments of linear progression as well, but these only serve to highlight the headway you can make yourself. The story itself is nothing overly taxing or new. It’s a nice story about coming-of-age in the space age that you’ve probably heard before, but with some decent voice acting and a fairly amusing sidekick, you won’t be bored following along its little route.

But it is the gentle exploration that is the focus of the game. It’s worth mentioning again that the game is absolutely beautiful to behold. From the creatures that meander across the fields and valleys to the waterfalls and ancient ruins that dot the landscape, you can spend a lot longer then you expect just admiring a planet. And the soundtrack, calm and understated as it is, creates a lovely inoffensive environment to move through. Although there could be a bit more to participate with, what you can hear in the quiet places is perfectly matched to the rest of the game.

You don’t play Morphite for the action or drama. It is not some epic story about your place in the universe or the scale of the world around you. You’re not some destined hero fighting to save a desperate world. You’re a wanderer, looking for some Morphite in a beautiful, easy to navigate world. For people looking for something relaxing, especially on the Switch where you can just curl up and play it on the handheld screen, Morphite is a lovely digital getaway.

Reviewed on Nintendo Switch (code provided by the publisher). You can purchase the game for Xbox One via Microsoft's Store.

Morphite is impossible to play without thinking about No Man's Sky, but it is by no means a mere imitation. Morphite has its own ideas and despite some minor faults, executes them very well.