Monopoly, that wonderful game we’ve all played, and yet we all apparently don’t understand the rules. What introduction do you need to one of the biggest and possibly most famous board game of all time? Monopoly really is that big, and most people will be hard pressed to say no when you slam the board down in front of them, and when it’s on Switch, it’s easier than ever to pressure your friends into playing with you.

Monopoly on the Nintendo Switch is a good way to play the game. Fact is you have a wide variety of controller options, including single JoyCon and Pro Controllers, a small selection of pieces to play as, and a small selection of board types too. On Living Boards, boards, well, come to life, with properties and skyscrapers shooting out of the center of the board. The Classic Boards on the other hand, well, they’re just a 3D model of the board. 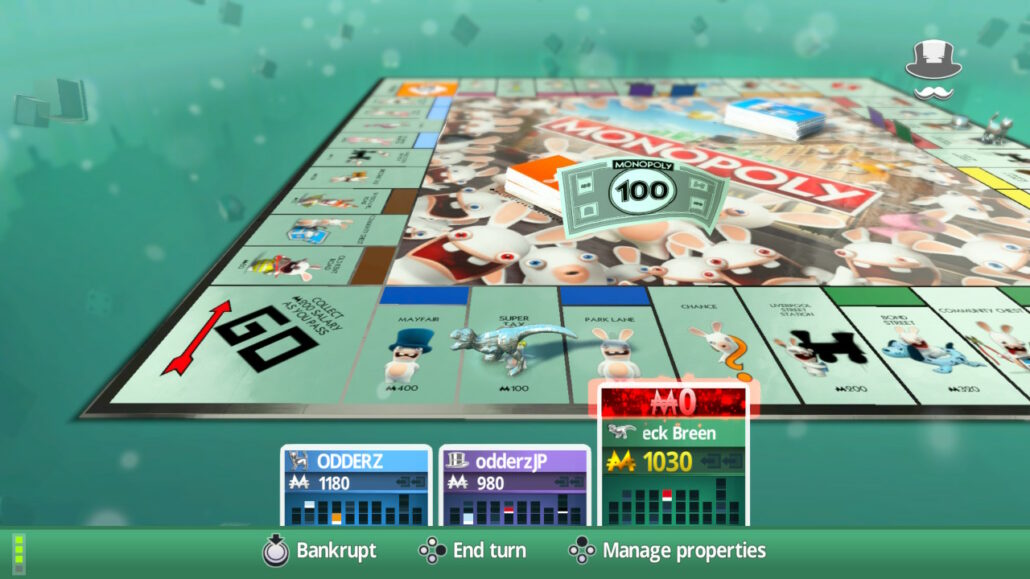 But, here we come to our first hurdle. The Living Boards do not play well with the Nintendo Switch. Optimisation clearly wasn’t top of the list, because you’ll be looking at a framerate below 30FPS for the entirety of the game. The Classic Boards, as you might expect, hold a much better framerate, so at least things don’t stutter along as the camera follows your pieces around the board.

You get three Living Boards to choose from, and two Classic Boards - why there are so few Classic Boards to choose from, given how much easier they are to create, is a mystery. Or, would be a mystery. Of course, Monopoly on the Nintendo Switch is a port of the PS4 game Monopoly Plus, which is ripe with DLC boards. But, fear not! They do actually include a piece of DLC for free with Monopoly on Switch. A board based on the Rabbids. Great. 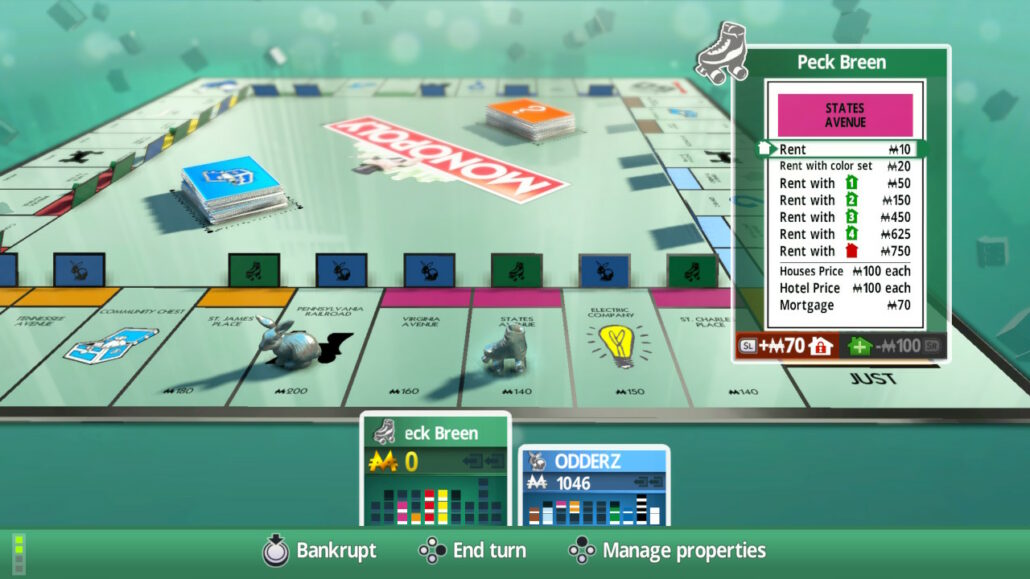 Other than what board you can play on, you can choose a variety of rules for speed, although messing about with the rules just made for a slightly more unpleasant play experience, at least it did for us. Having more money in Speed Rules meant no player was ever put in a compromising position, and other adjustments just meant that the game didn’t play out the way any player had in mind.

Rules adjustments are there as an option, though. What might not be an option for your is technical performance and a few bugs along the way. During my time with Monopoly on Nintendo Switch, I encountered frequent framerate issues on Living Boards, as stated, a couple of very odd controller issues (only when assigning controllers to players in-software, not when syncing controllers in the Switch overlay) and even a hard crash - the first I’d ever seen on Nintendo Switch. I guess I should be glad I know what the hard crash screen looks like? 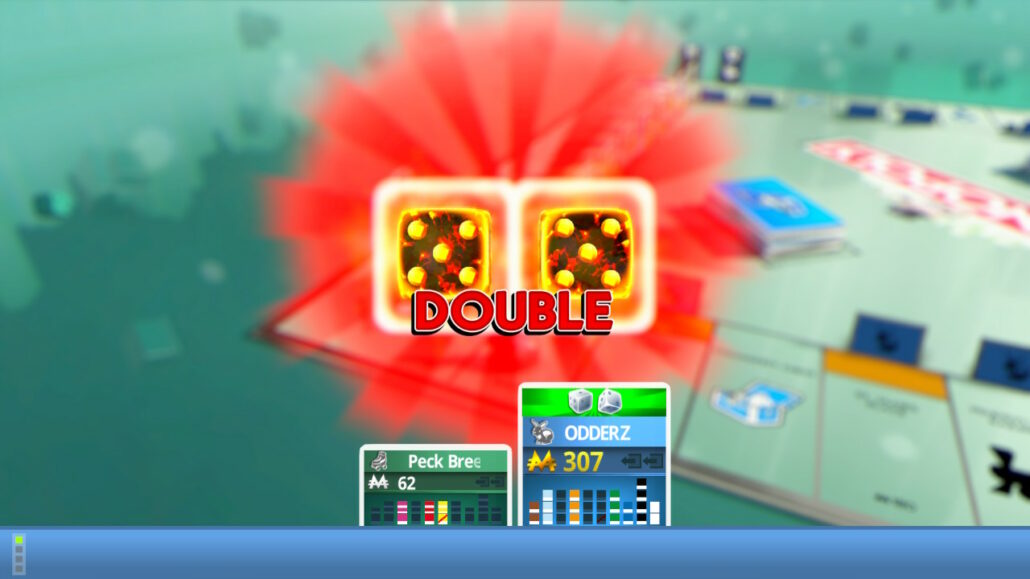 Luckily, Monopoly on Nintendo Switch autosaves pretty much constantly, and you can quickly boot your game back up afterward. Well, I say quickly, but we’ve seen an initial load go on for as long as seven minutes, at least. There’s an initial load bug of some kind that prevents the game from booting immediately unless the Switch was recently restarted. Given this is a console very much designed for sleep mode, it’s absurd that the game has been released in this state - for £29.99, when the PS4 Monopoly Plus is available for £11.99. Remember, this is essentially the exact same game, you’re just paying for worse performance and the option of taking it handheld.

Oh, there’s an online mode, too. Nice, but the fact is if you run into any issue that hard crashes the game, or you have a controller issue that was similar to ours, you’ll need to close the software (if you’re not forced to) and the game will be over. It’s a bit embarrassing, honestly. 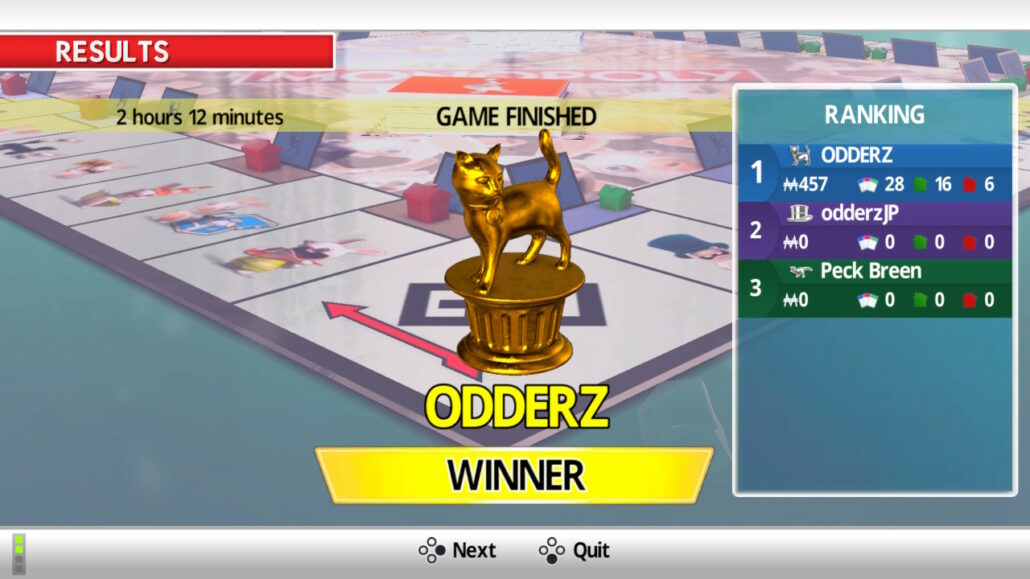 And the worst part of it all is that I’m not sure, after all this time, that Monopoly is a very good game. Like, not just this version of Monopoly, but the board game in general. It was made to prove capitalism sucks, and you know what? It does. And so does Monopoly. And yet, for some genuinely baffling reason, I sat playing it with friends for hours on end, wondering if I was having a good time throughout. But it always ends in disappointment, for everyone. Either the frustration gets too much and the Bankrupt button is pressed, or someone throws the board out of the window. Or the Switch, in this case. Which is far more expensive.

Basically, don’t bother with Monopoly on Switch until it becomes way cheaper, and with far fewer bugs and glitches.