Minecraft Dungeons is short, sweet, and uncomplicated. And for a genre with a history of complex menus and an overwhelming desire to crush you under numbers, that can be a mixed bag. Keeping the blocky aesthetic of the source material should be a telltale sign that this isn’t the most complicated game, but while Minecraft proper has surprising depth as demonstrated by the most serious builders, this dungeon crawler spin-off simply does not. Still, Minecraft Dungeons features crisp design and frantic combat that make for a fun, albeit short game to play with friends.

It's clear from the beginning that a lot of care has been put into the design of Minecraft Dungeons. It has updated so many of the enemies and biomes into such a perfect recreation of a dungeon crawler that it's hard to believe it wasn’t the intention when they were first designed. And having an onboarding accessibility menu before the first cutscene is always a nice touch. Beyond that, from the very beginning you get the sense that this game is a little shallower than you might have anticipated. 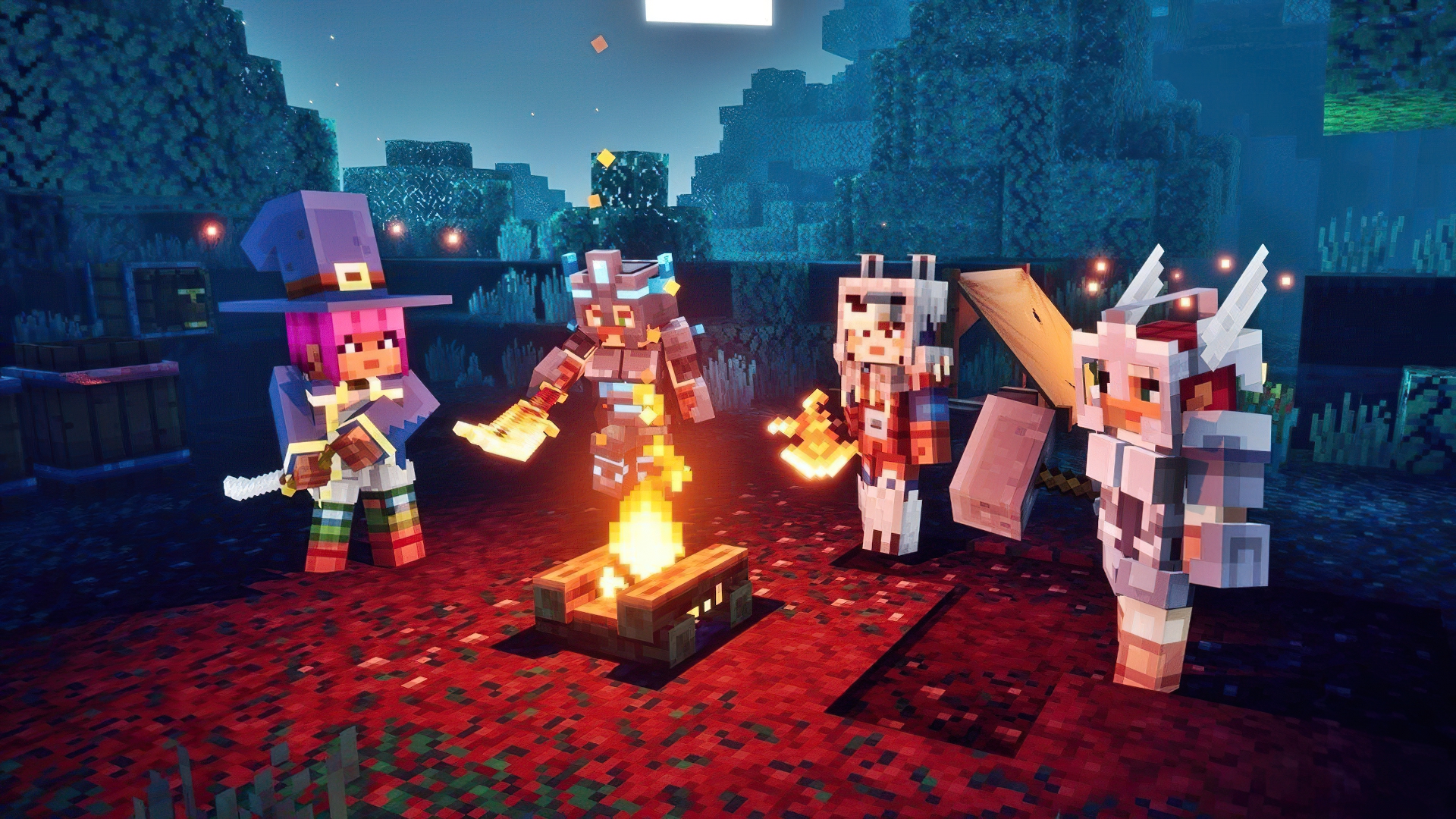 Dungeon crawlers are all about grinding content to piece together a more powerful hero through new equipment and unlocking new skills - only to grind some more. Minecraft Dungeons does away with the traditional skill tree, however, and its equipment options are considerably pared down compared to other dungeon crawlers. Skill points, or enchantment points as they are called in Minecraft Dungeons, are used to improve your equipment, unlocking new features of your sword, bow, or armour. Once you’ve found something to replace them, the equipment can be salvaged which returns your spent points, so you don’t even have to worry about grinding to improve your new equipment. Meanwhile abilities are harnessed through artifacts, which have a variety of powerful effects and do fit neatly into the Minecraft world. The fishing rod, for instance, has been repurposed to hook enemies closer. For fans of the genre that get restless when they have to trawl through countless menu screens, crafting recipes and merchants catalogs, Minecraft Dungeons is refreshingly minimalist. However, if extensive spreadsheets of data are what gets you into the epic dungeon crawling business, you’ll likely be frustratingly let down by this entry. Furthermore, while there are a handful of different weapons and artifacts to collect on your journey, they don’t feel too distinct from each other, or anything the genre hasn’t had before.

Despite this, combat is fun and for the most part offers a good balance between challenging and overwhelming. Minecraft Dungeons includes a pretty wide spectrum of difficulties so that you may find your sweet spot and work your way up as you get yet another sword with a bigger number attached. Familiar Minecraft enemies are scattered along your path and constantly keep you adapting your strategy. Spiders can stick you down in place, where creepers try and detonate in range and witches throw potions in your direction. You’ll have to constantly swap between melee and ranged attacks while tracking your artifact cooldown to survive in some of the larger encounters. The combat lets you sink into that comfortable headspace that dungeon crawlers have always reached for. It's almost like the game equivalent of ASMR that is in equal parts relaxing and exciting. You never feel taxed in Minecraft Dungeons (unless you jump the difficulty up before you’re ready), but you’re also never bored.

It’s the kind of game where you can tell yourself you’ll stop after just one more level a couple of times before you realise you still haven’t stopped yet. Bosses however can make you eager to put the controller down. The difficulty spike often jumps up a little too high during the encounter, almost turning the dungeon crawler into something more akin to bullet hell. This can be doubly annoying on your own as it feels that bosses were not designed for single player sessions. Often bosses can only be beaten by just slowing the flow of the game, making charges against it only after your health potion has finished its cooldown before ducking back behind cover. They are still all possible to conquer solo though, even if the experience is somewhat more grating than with a friend or two.

When they're not hacking and slashing, players can explore the winding, blocky corridors sprawling across the map, often finding some chests, emeralds, and optional encounters along the way. Without any grand vistas, interesting set-pieces or hidden narrative beats to uncover, however, these trips into the unknown are entirely utilitarian. And because of this, the walk back can feel a little too long. Without respawning enemies you can spend a few minutes dashing back through the same hallways you just came through to find the next mob to smash. 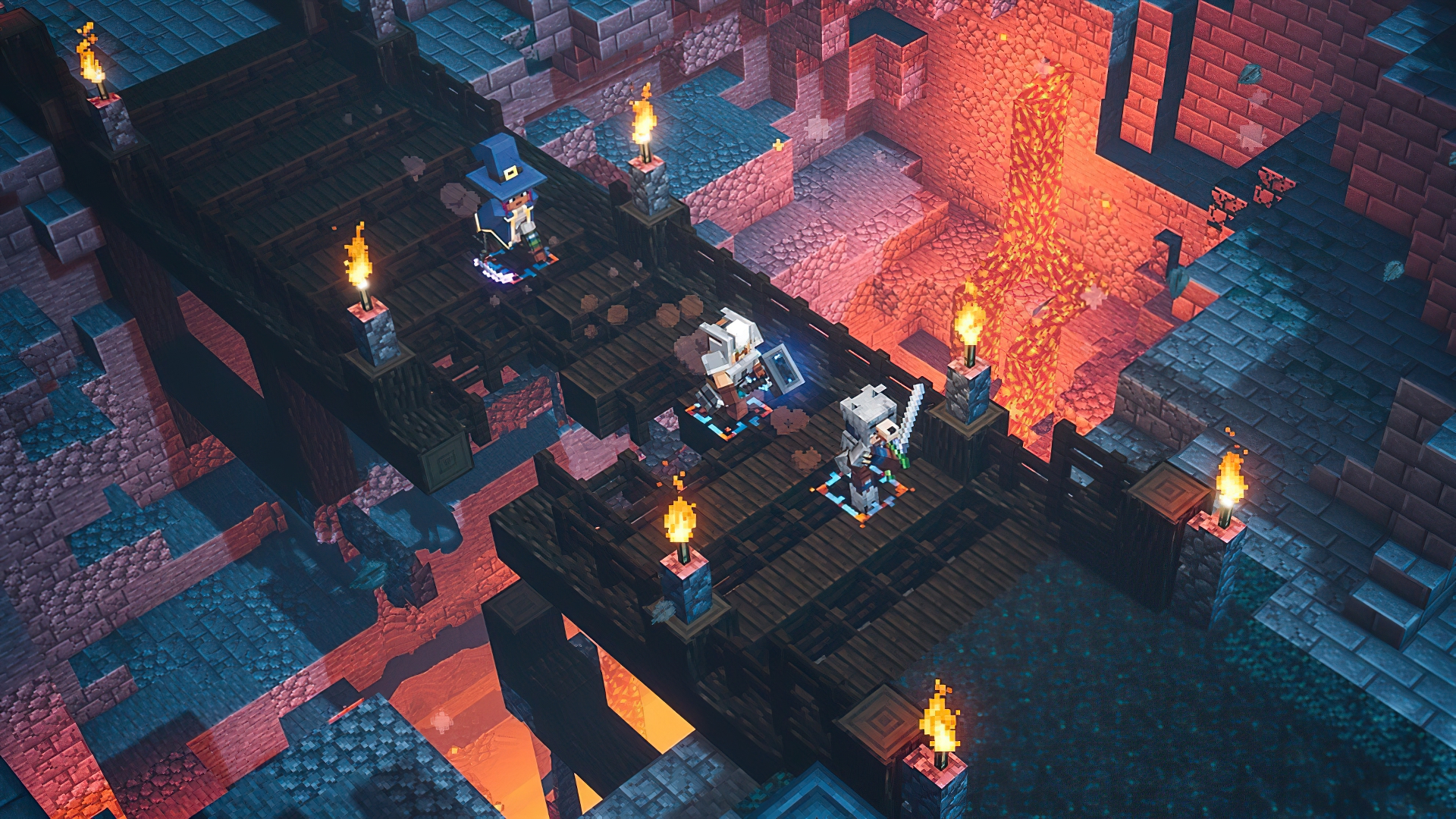 Minecraft exists in a strange state. It was a global phenomenon that reshaped the games industry and the way the world viewed it, but that was about a decade ago. Fortnite has since taken its crown, and now Minecraft sits a bit in the background. It's still incredibly popular, but it doesn’t quite get the attention it used to. And with the first generation of Minecraft kids now in their late teens or older, its audience seems less well defined. Minecraft Dungeons is clearly a game designed for a younger audience and it feels like despite the freeform nature that attracted so many children to Minecraft initially, this new game doesn’t trust its audience to understand what exactly they are playing.

The combat in Minecraft Dungeons is a great deal of fun, with all the abilities you can throw around and all the enemies you’ll face. But thanks to its too small of a sample of loot and too short of a campaign, the experience can be over before you even realise its done.

Minecraft Dungeons is a bright and colourful dungeon crawler, with interesting enemies and fast, frantic combat. It doesn't bring anything new to the genre, and takes away quite a lot of its complexities, leaving us with a simple, accessible, unremarkable yet still fun game.